What is the SteelSeries Siberia Elite Prism?

The SteelSeries Siberia Elite Prism is a mid-range wired gaming headset that’s designed for Windows and Mac computers, PlayStation consoles, and mobiles and tablets. It costs around £170 at retail, and includes all the cables and adaptors you need to connect it to a range devices.

The SteelSeries Siberia Elite Prism offers everything you’d expect from a headset at this price, including a microphone, Dolby Headphone technology, and programmable audio settings, as well as some of its own features, such as customisable LED lights, noise isolation, and the ability to share audio with a second set of headphones.

The SteelSeries Siberia Elite Prism is also notable for its style and comfort — these are a great-looking set of cans that are comfortable and well made. There are only really a few things to criticise — the lack of Xbox One support (although you can buy an adaptor to fix this), the huge size of the headset itself, and the lack of wireless connectivity.

The SteelSeries Siberia Elite Prism is one of the best and most versatile gaming headsets on the market for the price, and one of the most stylish to boot. 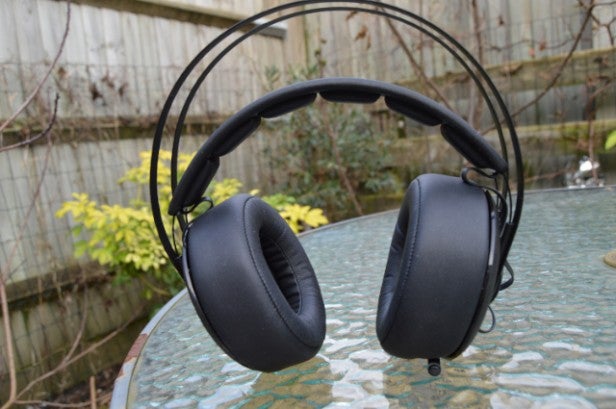 Swedish peripheral maker SteelSeries has been quietly putting out some of the best gaming headsets on the market. With its oversized ear cups, flexible headband and colourful LEDs, the previously-released Siberia Elite was the company’s most distinctive audio offering, and one of the most stylish too.

This “Prism” edition of the Siberia Elite takes SteelSeries’ most famous headset and makes a few tweaks. There’s a new, slimmer microphone that supposedly offers clearer voice communication than before. The openings of the memory foam ear cups are now larger, which SteelSeries says makes them more comfortable for a range of ear sizes. The headband features a new degree of curvature to make them more pleasant to wear for different size heads. And finally, there’s also an upgraded USB sound card, although exactly how it’s been improved isn’t clear from the accompanying documentation.

Although style is obviously a matter of personal taste, there’s no denying that the SteelSeries Siberia Elite Prisms look a lot more fashionable than most of their competitors. The likes of Turtle Beach and Astro make excellent gaming headsets, but their offerings mostly look like they belong on the head of a pro gamer competing in a sweaty convention centre somewhere. SteelSeries’ Siberia Elite Prisms, meanwhile, look like they might be just at home on the head of a DJ as they would a gamer. 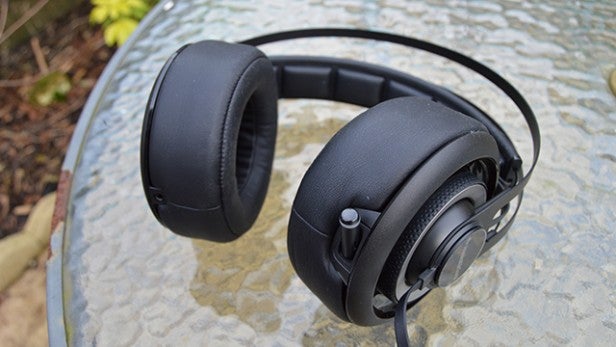 As well as looking good, the Siberia Elite Prisms are exquisitely well made. The large memory foam ear cups are soft and luxurious, the headband magically rests across your head without the need for any adjustment, and the microphone neatly retracts into the headset when not in use. Overall, you get a reassuring feeling of quality whenever you put them on your head.

The only thing that might disappoint is just how big they are. They’re compatible with portable devices with a 3.5mm input, but they’re so big that you wouldn’t want to carry them around with you, and they look so big you’ll get some strange glances on public transport if you do wear them out and about.

While there’s nothing subtle about the size of these cans, there’s a lot to like about how subtly it’s been designed when it comes to features. Rather than using buttons, each of the light rings on the ear cups is used for controls. The right earpad twists to raise or lower volume, while the left mutes and unmutes the microphone.

For reasons that only really make sense to Microsoft, the Xbox 360 and Xbox One have bespoke audio connectors, so the Siberia Elite Prisms aren’t compatible with these consoles. You can buy an adaptor for around £20 to make them work with the Xbox One, but bear in mind that there are other headsets at this price, such as Astro’s excellent A40s, which offer Xbox One compatibility out-of-the-box. 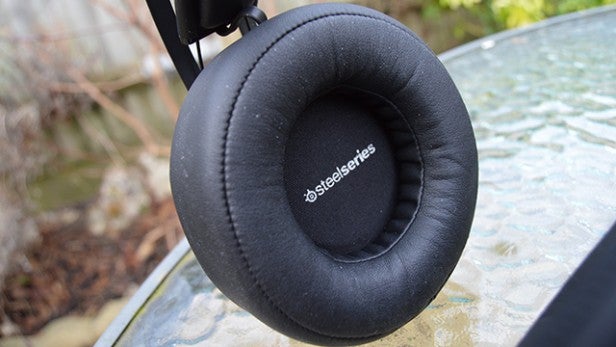 The SteelSeries Siberia Elite Prism headset comes with a number of different cables and adaptors to allow you to connect it to your devices. The headphones have a short 1.2m cable that’s hardwired to the left earcup at the top and has a proprietary connector at the bottom.

You’ll need either a PC or Mac to really get the most from the SteelSeries Siberia Elite Prisms. These are the only platforms that use the USB sound card, which is what provides Dolby sound processing. They’re also the only platforms which support SteelSeries Engine 3, a piece of software that allows you to create custom sound profiles for the headset, as well as adjust the colour effects of the LED lights which illuminate the outer rim of each ear cup.

If you’re using a PS4
or a mobile/tablet, you connect the headset using a 3.5mm audio
adaptor, which transmits both voice and audio through one connector. On
the PS4, you connect to the DualShock 4 controller and use the System
Settings menu to control whether you hear all game audio, or just chat.
You can also extend the headset’s range by using the 2m extension cable,
as the standard 1.2m cable isn’t very long at all. 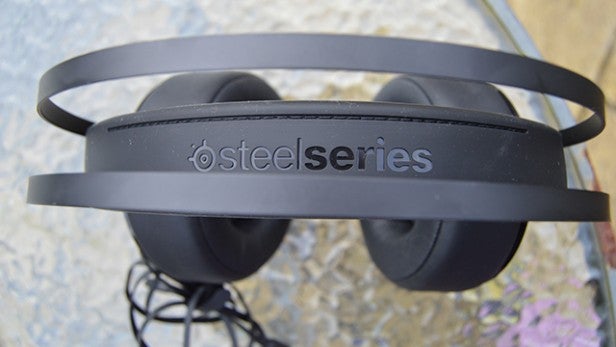 The SteelSeries Siberia Elite Prisms sound great, and are up there with the best headphones when it comes to audio quality at this price. The headphones certainly sound best in games, which is what you’d expect from a gaming headset, but we found we needed to boost the bass using the included software for movies in order to create a more immersive sound stage.

The surround sound options on the headset are perfunctory. Like other headsets using ProLogic IIx or Dolby Headphone technology, they attempt to recreate surround sound using just the two speakers in the headset. It’s a compromise that doesn’t really offer any tangible benefit in most games, so we ended up choosing the standard option of stereo sound instead.

Audio quality from the microphone is as good as you’d expect from a dedicated headset — it’s certainly better than what you get with the bundled microphone with most consoles, but nothing to write home about. The ability to quickly mute and unmute voice communication using the ear cup was great though, as was the red LED at the end of the microphone itself, which lets you see at a glance when you’re going to be heard. 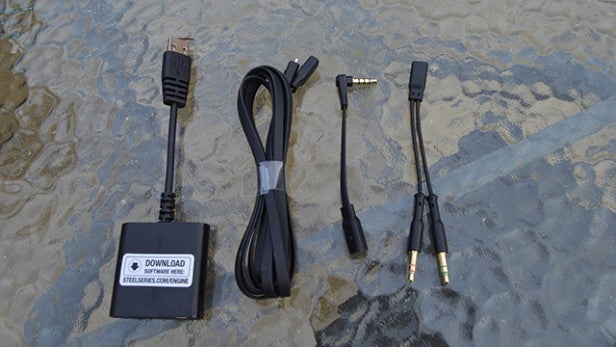 The SteelSeries Engine 3 software isn’t the most user-friendly package on the market, but it has most of the features you’d want to control audio. You can tweak how the headphones sound and create profiles for individual games or tasks, and you can adjust the colour of the glowing LEDs between 16.8 million configurations, or set them to a rotating pattern.

The SteelSeries Siberia Elite Prisms also boast a couple of neat audio features that are rare on a headset at this price. The first is the 3.5mm audio output on the headset, meaning you can connect another headset and share the audio with a friend. This might not sound like much, and being physically tethered to a friend can feel slightly odd, but it’s great to be able to share the audio when playing with a friend. The second feature is noise isolation, which means that the headphones are big and thick enough to block out a lot of the ambient noise that may affect your game playing. It’s important to note that the headphones boast noise isolation, not active noise cancellation, so they won’t block out the general hum of being on an airplane, for example. However, they keep outside noise to a minimum, while the closed back design keeps gaming noise down for anyone else who happens to be in the room. 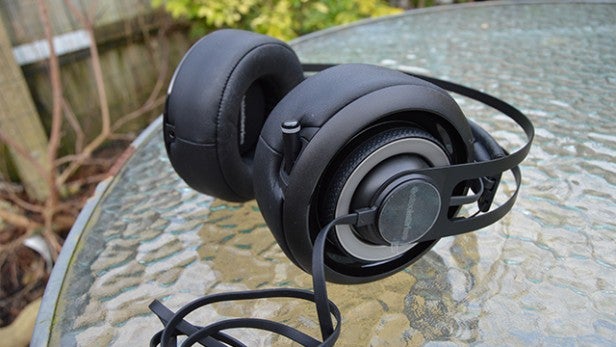 Should I buy the SteelSeries Siberia Elite Prism?

The SteelSeries Siberia Elite Prism is one of the best mid-range gaming headsets on the market. The audio quality is great, they’re stylish and well made, and the feature set is expansive, with a couple of unique offerings not found elsewhere.

Our only complaints are the lack of Xbox One compatibility, although that’s Microsoft’s fault, rather than SteelSeries’. The headset is also very big, and while that adds to its overall comfort for a range of heads, it limits its practicality for portable use.

There’s also a lot of excellent competition at this price. Turtle Beach’s XP Seven headset is available for under £200 and offers similar sound quality and more audio customisation options, although it is arguably less stylish than SteelSeries’s headset. Then there’s Astro’s A40, which is a great gaming headset and offers Xbox One compatibility out-of-the-box.

SteelSeries Siberia Elite Prism offers nearly everything you’d want from a headset at this price, while its style and unique features set it apart from the pack.