What is the SteelSeries Sentry?

Primarily designed as an aide for professional gamers and game streaming, the SteelSeries Sentry is an eye-tracker that you can use with monitors and laptops up to 27-inches, as long as they have a USB 3.0 you can use.

Motion tracking is certainly not a new technology for gamers, with the likes of the Xbox Kinect, Wii Remotes and other tech already well established. But the SteelSeries Sentry is the first piece of eye-tracking consumer terchnology to hit the market and it’s on sale now for around £150. For that price, you’ll nab yourself the Sentry unit itself along with a copy of Assassin’s Creed Rogue, the reasons for which will become apparent.

It might look like a PlayStation Camera or a slimline version of the bulky Xbox One Kinect, but the SteelSeries Sentry is a far more niche device. Something that might just hold it back in the long run. 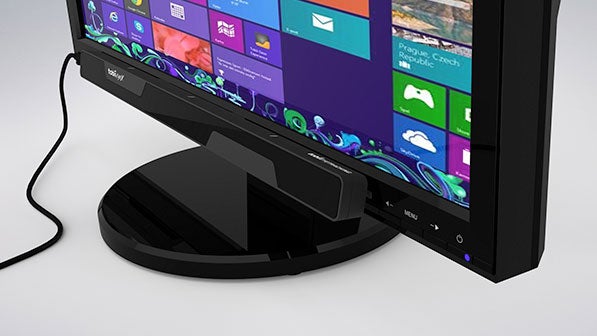 The SteelSeries Sentry is made up of a slim black box, which houses three sets of illuminators and a camera within. These are used to track your eye movements with great precision. The Sentry is powered by Tobii Tech, a company that has been working with medical eye-tracking technology for years. Because of the internal tech, the Sentry is actually capable of scanning your eyes 50 times per second, which makes it very reliable in-game.

In the box, you get the Sentry, the USB 3.0 cable and a set of magnetic strips that you’ll need to use to attach it to your monitor or gaming laptop. You simply peel off the adhesive strip and position one magnet centrally along the bottom of your screen bezel. The magnet is discreet enough that it’s barely noticeable on a black monitor or laptop surround when you’re not using the Sentry. Plus, if you decide you want to remove the magnet, it’s easy to remove and doesn’t leave a sticky residue behind.

Once you’ve got your magnet in place, the Sentry locks into place using its internal magnet for quick fitting and removal. All you need to do then is run the cable from your PC to your Sentry, and watch the three red illuminators start to glow and flicker. 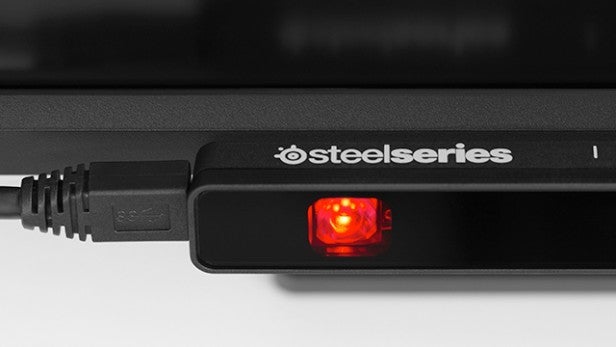 Using the bundled Tobii Eye-X software, you can quickly run through a simple set-up process that only requires you to follow a glowing dot with your eyes. There are options to enable single eye tracking if you’ve got a lazy or wandering eye, as well as tracking for contact and glasses wearers.

We’ve tried using the Sentry with our contacts in, glasses on and (albeit a little blurry) with naked eyes and we’ve not had any difficulties.

You can also programme multiple users, making it easy to switch between users without having to go through the setup again.

When you’re up and running, the Sentry’s trio of red lights glow gently and occasionally flicker as it tracks your eyes moving across the screen. It’s not too distracting though, as when you start playing you quickly become accustomed to the warming glow.
It is a bit disconcerting at first seeing your eyes represented as two white dots in a small black box at the top of your screen when you start up games that support eye-tracking. There’s something a little bit horror movie about it. 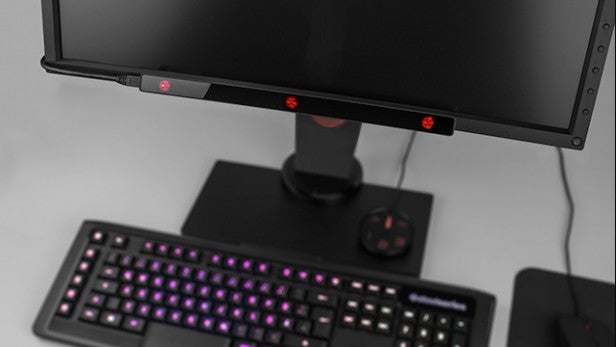 Although the primary purpose for the SteelSeries Sentry is to help professional gamers and streamers, a few games are trialling eye-tracking functionality for in-game controls.

The first of those is Assassin’s Creed Rogue. The game only includes the technology because Corneliu Vasiliu, Producer at developer Ubisoft Kiev, saw the Tobii technology demonstrated at a trade show and decided to add it to AC: Rogue. But, it’s definitely a pioneer as to how your gaze can be used as another input in games.

How it works is that you use your eyes to control the camera. All you need to do is look where you want to go and the in-game camera will pan accordingly. You can still grab manual control with your mouse or analogue stick if you need to, but the eye control is surprisingly natural.

It does feel a little strange at first, but soon you’ll have Shay Cormac bounding across snowy branches and skydiving from icy clifftops without having to move your right hand/thumb at all.

Plus, if you look away from the screen, the Sentry causes the game to pause – meaning you don’t miss any of the action if something else attracts your attention. It also realises when you’re looking at the mini-map, holding the camera steady when you’re checking your orientation. 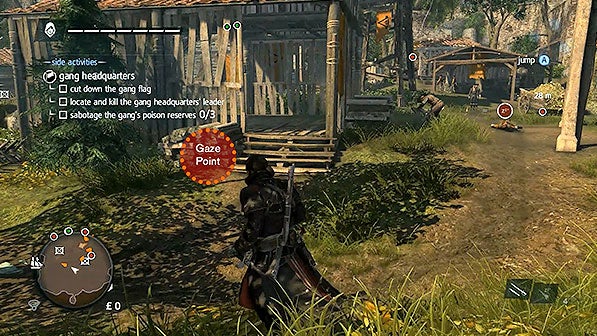 But, although it all feels very immersive when you’re running about, the first issues start to occur with Assassin’s Creed Rogue when you want to be a little more stealthy – as you are wont to do in a game focused on assassination.

Every glance you make moves the camera, which means if you’re trying to take a look around corners and keep a check on guards it’s near impossible as the camera is constantly twitching. We found we were constantly reaching for that right analogue stick when we weren’t moving at speed.

It was also frustrating that the boat sections don’t support the eye-tracking functionality. It’s quite jarring at first when you’ve been controlling the camera with your eyes in the opening sections of the game to suddenly lose control when you move to the open waters.

We’re not sure that these are issues that Ubisoft contemplated when adding SteelSeries Sentry support to Rogue. We were initially completely won over by eye-tracking as an extra game input, but as we played Rogue more the teething issues with the technology in practice became more palpable.

We also tried out the two other games that currently support the Sentry. 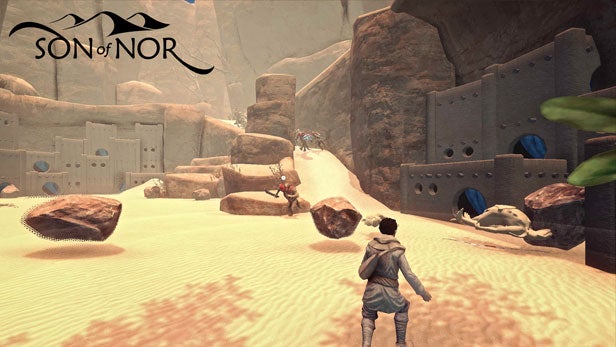 Hunter: Primal is a first-person sandbox survival game set on an alien land full of aggressive dinosaurs. Again, we had similar issues to Rogue. While you’re running about across the open world, it feels instinctive. But as soon as you have to start scouting for other dinosaurs you can’t look around at your surroundings while running in a different direction. It made us prone to becoming a T-Rex snack. You can lock the camera in place, but that will disable the eye-tracking functionality altogether.

The third game is an indie title known as Son of Nor. We believe it is the best example of using eye-tracking in a game. Rather than controlling the camera, your gaze is used as a cursor with which you can pick up, levitate and throw huge rocks at enemies. You look at an item and click your left mouse button to pick it up, look at where you want to throw it and release with the right button.

Actual navigation is still controlled with the standard AWSD keys, so you don’t have any of the directional issues we had with the other games. You don’t even have to turn and physically face your enemy to lob a rock at them. You only need to turn your character’s head. 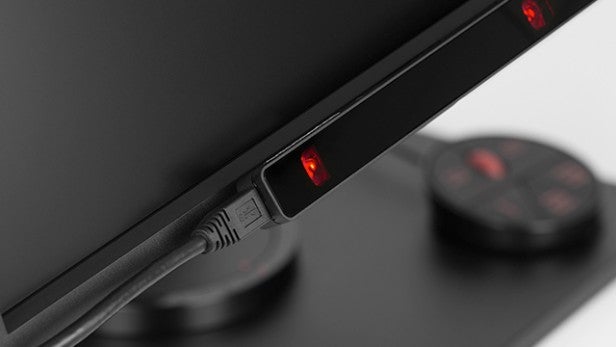 It’s a shame that there’s such limited game support for the SteelSeries Sentry at present, but the Sentry has another implementation that might boost sales – game streaming. In fact, SteelSeries is calling this Sentry’s main feature.

When you’re playing DOTA 2 or StarCraft 2 (the only two games that currently support this feature) you can add an overlay to the screen that records your eye movements throughout an entire match. This overlay allows you and your viewers over YouTube or Twitch to see which parts of the screen you pay most attention to and should enable them to learn more about the best ways to play.
The game analysis offers detailed statistics on important features, such as how often you look at your mini-map, your enemy’s items and various other regions of the game screen.

Now we have to admit that we hadn’t spent much time at all on either DOTA 2 or StarCraft 2 before reviewing the SteelSeries Sentry and were what you could call a noob. 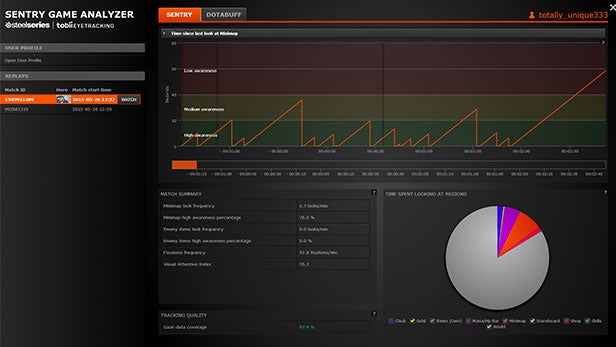 However, over the course of multiple weeks with the SteelSeries Sentry, we can happily say we saw a slight improvement in our win rate, just by taking the time to look over the game analysis post-match and see how you could enhance your abilities.

It also helps that you can watch your match replays too, something that’s particularly useful if you are rubbish like us.

But it’s the true pros that will find this data most useful, and those that follow the best DOTA and StarCraft players on Twitch or YouTube.  We managed to improve our game by simply learning from our own mistakes, but those who are already masters of the game will have lots of wisdom to impart as to where you should be looking on the screen and when. 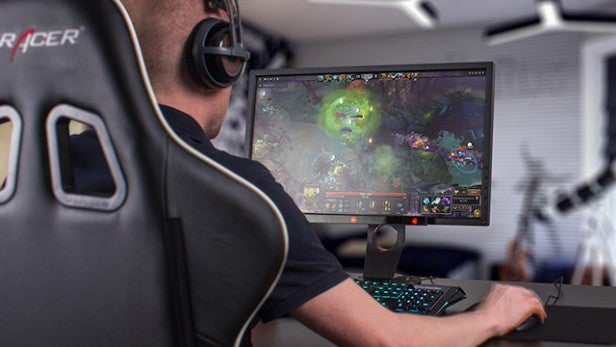 Should I buy the SteelSeries Sentry?

Unless you’re a gaming tech enthusiastic who’s particularly flush with cash or are already a prolific DOTA 2 or StarCraft 2 streamer, we can’t see the general consumer needing to purchase the SteelSeries Sentry.

For £159.99, you do get a copy of Assassin’s Creed Rogue, but it doesn’t quite justify the expense as yet.

SteelSeries promises the game support will be widening in the future, both on the input and streaming side, but there’s been no indication as to when that will happen. Or which games will be supported.

Until that happens, you’d have to be a dedicated DOTA or StarCraft gamer to be able to justify such a purchase, though it’ll be interesting how this tech could be used in future

Although the eye-tracking technology is promising, the limited game support and less than perfect game control make the SteelSeries Sentry a fun, experimental gadget rather than a must-have accessory.