Though it might not be the name you first think of, SteelSeries is a well-respected brand in the gaming peripheral market. In fact, the company’s last mouse to cross our desks, the snappily titled SteelSeries Xai, received our highest commendation. However, with even peripherals becoming ever more advanced these days (check out the amazing Logitech G19 gaming keyboard, which has its own CPU and colour screen, to see what we mean), it was arguably high time for an update. So does the new Sensei bring the necessary performance and features to steal gamers’ hearts (again)? 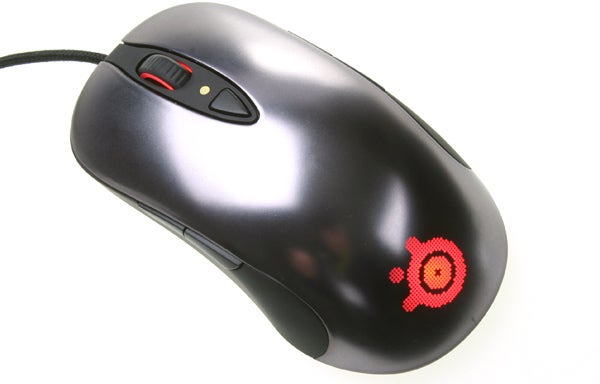 When you first see the Sensei, you would be forgiven for thinking that not really all that much has changed. Sure, there’s a new glossy metallic coat of paint, but this aside it’s the exact same ambidextrous shape and has the same eight-button configuration as its predecessor, down to the triangular dpi switch below its scroll wheel (unlike some gaming mice the Sensei offers only the option to toggle between two dpi settings out of the box, something the company found its pro gamer partners wanted).

However, under the hood this is a very different and far more advanced rodent. For it, too, has its own powerful processor! In fact, ladies and gents, we have a mouse with an original Pentium-equivalent CPU inside. This allows you to double the sensitivity from its laser sensor’s native 5,700 DPI/CPI to a whopping 11,400, among other enhancements. The Sensei also maintains the Xai’s LCD screen (at the mouse’s bottom). Even if it’s monochrome and can’t display more than a few lines at a time, that’s still rather impressive. Add in local storage, and this mouse is practically a computer in your palm. 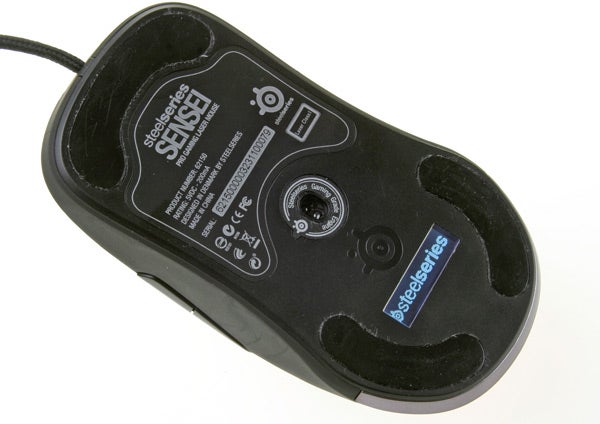 Not to be outdone by Logitech’s G-Series (the G9 and G9x), which offer a tiny strip of LED lighting in whatever colour you wish, the Sensei boasts even more LED areas. This includes two rings to either side of the scroll wheel, a round LED between wheel and CPI button, and the SteelSeries logo. All three can be set independently to a selection of 16.8 million colour options. Though the logo part is obviously covered while gaming, either way it’s a glorious sight to behold. If you’re into LED bling, this is definitely the mouse for you, and if you aren’t, you can simply turn it all off. Incidentally, the inclusion of all this bling is something of a turn around from Steel Series’ previous philosophy of cutting all the extraneous stuff and just sticking to the hardcore gaming basics as it did on the Xai (which is still readily available it should be noted).

Combined with features like ‘adjustable lift distance’, ‘advanced macros’, and FreeMove (which eliminates the dreaded path correction) – to name but a few – SteelSeries’ claim that the Sensei is the “world’s most customisable mouse” is probably no great exaggeration. What this gaming mouse does lack is a weights system (it weighs 106g and always will, unless you chop bits off) or adjustable grips, so if you’re after the ability to change your rodent’s shell, the G9x or Cyborg RAT might be more up your street.

It’s also worth mentioning that, like its predecessor, the Sensei was designed with the help of some of the biggest names in competitive gaming (eSports) across various genres, including the likes of Fnatic, Evil Geniuses and iNcontrol. Having a whole raft of people giving their input is a vastly preferable concept to being advised by just a single famous gamer (Fatal1ity, anyone?), who might have a distinct playing style and ergonomic tastes that won’t be for everyone.

Before we get too far ahead of ourselves on innards and features, let’s talk a little more about design. As already mentioned, the Sensei is ambidextrous, and thus symmetrical. Keeping this in mind, its contours are just about ideal – though we’ve handled more comfortable mice, none of them catered to southpaws. There’s a decent amount of support for palm gamers, while the body is slim enough for ‘claw’ gamers, making it a great compromise no matter which hand you use or how you use it (appropriate jokes in the comments, please). 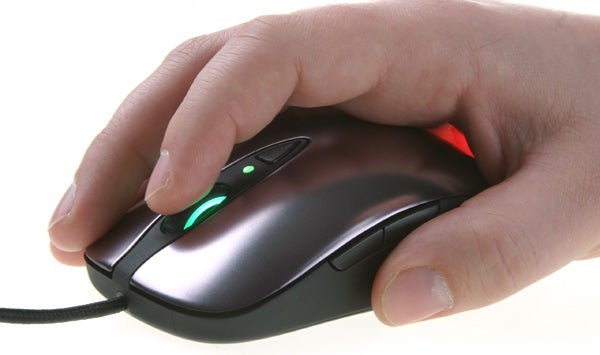 Despite its glossy-ness that silver finish isn’t a fingerprint magnet (due to some magic involving the CPU and a quantum stereofibrilizator, no doubt), and the soft-touch black plastic along the sides provides a secure grip, though strangely it’s not as soft or grippy as the Xai. 16 percent of the mouse’s base is covered by its Teflon feet and glide action is very smooth – though no more so than most reputable gaming mice.

The action of the Sensei’s main right and left buttons is superb, with just the right amount of resistance and a firm, audible click. The active zone for each of these buttons is also huge, extending to nearly the middle of the mouse’s body: you can still click quite easily by pressing to either side of the CPI switch. 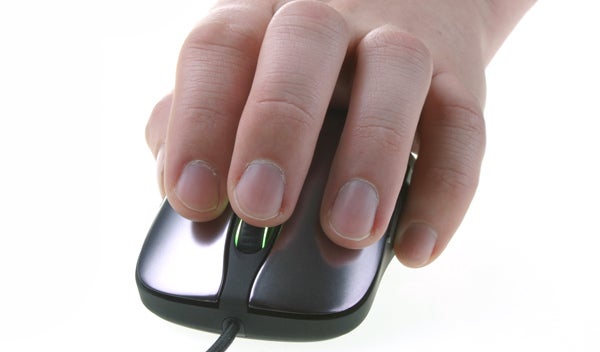 The other five buttons likewise have a great action and are well-positioned. Our only niggle is that it’s far too easy to press one of the side buttons accidentally while trying to grip the mouse in the heat of battle (or even while just browsing the web or such like). This may be the inevitable result of creating an ambidextrous mouse whose extra buttons are easy to press when you need them, but we wish there was a way around it.

Last but not least, the soft rubberized scroll-wheel feels great under your finger, offers a crisp click, and sports beautifully balanced, notched action. Mind you, it’s far from the most advanced wheel we’ve come across. For one thing, it only offers up and down: unlike rodents from Microsoft or Logitech there’s no sideways scrolling, which even if you never use vertical scrolling robs you of two usable ‘buttons’.

For another, we’re completely addicted to Logitech’s micro-gear scroll
wheels – that allow you to flick them just once and have them spin for a
while – and really miss it on any mouse that doesn’t have it. 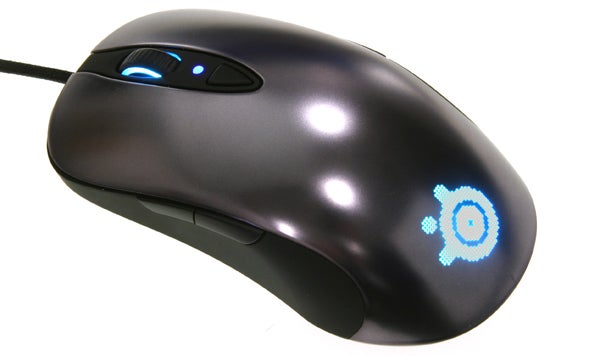 That said, this is very much a design decision taken for good reason. In all the research Steel Series has done, hardcore FPS gamers in particular have said they prefer mice that don’t freewheel or offer side clicking because when they use the scroll wheel while gaming they want to ensure that it only moves as much as they require and their movement isn’t interrupted by erroneous side clicks. In this regard, it really must be remembered that Steel Series markets this mouse as a gaming tool, rather than simply another flashy mouse. That said there’s an argument for saying the side clicking buttons on the scroll wheel could still be included and users could simply disable them while gaming.

Finally build quality on the Sensei also holds up well. There’s not a hint of creak and the mouse survived a few trips in our backpack with no visible scars. The 2m cable is braided and supposedly anti-tangle but we found it proved far from tangle-free, though few mice truly avoid this. And of course its USB connector is (arguably pointlessly) gold-plated – natch, this is a 1337 tool, after all!

We didn’t start off very well on the software side of things. After a freshly downloaded copy of the SteelSeries Engine had installed, it kept asking us to “please connect a SteelSeries engine-compatible device to start”. Another install later with the mouse hooked up to our test machine during driver installation, the driver updated the mouse (changing the default LED colour settings on the rodent’s internal memory), but when the actual Engine booted we were left with the same error.

We went hunting for solutions to this issue on the net, and one Amazon forum user suggested installing to C:Program Files (x86) rather than the default C:Program Files on a 64-bit system, which fixed things nicely. You’ll also need to keep in mind that for now the software is not available for Mac, though support is coming soon – and you can always ‘pre-program’ your Sensei on a PC or laptop belonging to a friend and, due to the mouse’s ability to store all its settings, they’ll still remain on your Mac. 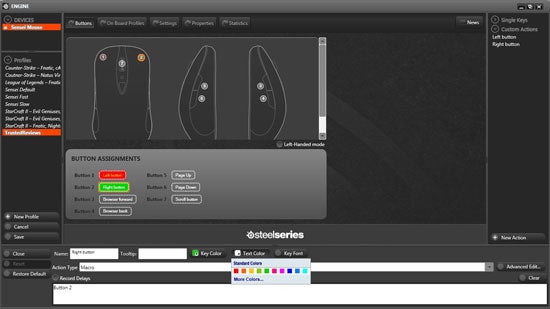 Installation hiccups out of the way, Engine is a sophisticated yet easy to use piece of software. You can create an infinite number of profiles or select one of the default ones, which include Starcraft II, Counter-Strike and League of Legends, created by some of those aforementioned professional gamers. You can then export/import, duplicate, rename, activate/de-active or delete these to your heart’s content, or store up to five of them on the mouse’s internal memory to take with you wherever you go. You can also set profiles to launch with a specific game EXE.

The LCD screen too is far more than just a gimmick. You can upload a custom bitmap to truly personalise your Sensei – though no-one will be able to see it unless they turn the mouse over, it’s still handy for identification at LAN parties. Where the screen really comes into its own, however, is in letting you customise every single aspect of the mouse’s performance sans PC, courtesy of the 32-bit ARM CPU beating at the Sensei’s heart. Just keep the CPI toggle pressed for a few seconds to active the menus and then use the scroll wheel for navigation. Like on the Xai, it all works beautifully.

The Sensei also offers a frankly ridiculous amount of sensor sensitivities, settings, optimisations and customisations. As mentioned, ExactSens allows you to alter the CPI from one to 11,400 (5,700 doubled) in increments of one. Incidentally, that’s from a 10.8 megapixel sensor which manages tracking of 150 inches per second. 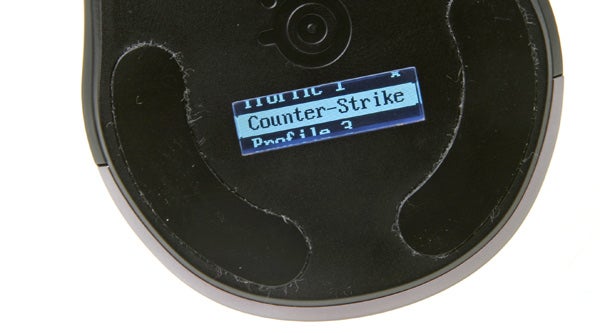 ExactLift lets you determine mouse lift distance with far greater flexibility than the Xai, meaning you’ll get the ideal one no matter what your gaming surface. ExactAim is fairly self-explanatory, dynamically decelerating your cursor to allow for more accurate aiming (though curiously Steel Series’ definition of this feature seems to have changed since the Xai, with an entry on its site still showing the is SteelSeries ExactAim? old explanation), while ExactAccel will do the opposite. FreeMove adjusts path correction, and there’s more; suffice to say that pretty much any setting you would want to tweak can be tweaked down to the finest detail. 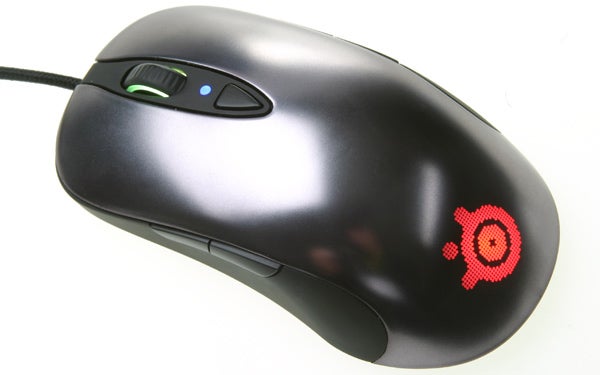 Programming advanced macros is also as easy as it gets, and you can even alter the colour and font of the virtual buttons representing those on the mouse in Engine. Visually we prefer software from Logitech and Microsoft, but when it comes to flexibility SteelSeries is a top contender. Needless to say, the Sensei’s actual performance in gaming is flawless. To be quite frank, we suspect most gamers won’t even be able to approach the limits of what its hardware offers.

When it comes to value, SteelSeries’ latest gaming rodent can be found online for as ‘little’ as £60, at which price it has few ambidextrous competitors. If you’re right-handed there are more alternatives, and at that stage a lot comes down to personal preference and whether you need to extra performance the Sensei offers. Regardless, with all the features it offers its price is more than reasonable.

With the Sensei, SteelSeries has crafted a worthy successor to the excellent SteelSeries Xai. Although some might bemoan the lack of adjustable weights or grips, this mouse is very well balanced and about as comfortable as ambidextrous gaming mice get – and there’s plenty of LED bling this time round to satisfy our inner gamer. The Sensei also offers some of the best, most tweakable performance of any mouse available, aided by its powerful ARM CPU and superb sensor.