Looking for a wireless gaming headset for Nintendo Switch? Then it isn't difficult to recommend the Arctis 1 Wireless. Despite its dull aesthetic, build quality is both sturdy and flexible. Audio presentation is loud, clear and distinctive across all the games I played, while the mic proved exceptional during multiplayer sessions across myriad platforms. You should only look elsewhere if the surround sound omission is a deal breaker.

What is the SteelSeries Arctis 1 Gaming Headset?

Wireless headsets for the Nintendo Switch are still few and far between, with only a handful of companies dipping their feet into the pool given Nintendo’s refusal to support Bluetooth peripherals. SteelSeries has managed to overcome this issue with the SteelSeries Arctis 1 Wireless.

Using a USB-C dongle with a 2.4GHz connection, the Arctis 1 can bypass Nintendo’s wireless restrictions. This gaming headset isn’t a one trick pony, also featuring superb audio quality, long battery life and a surprisingly robust range of features for the low asking price.

Predominantly sporting a plastic design with a harsh black colour scheme, the Arctis 1 isn’t the most attractive device in the gaming shed. However, what it lacks in visual splendour it makes up for in genuinely stellar performance. Switch owners rejoice, there’s a new peripheral out there for you. 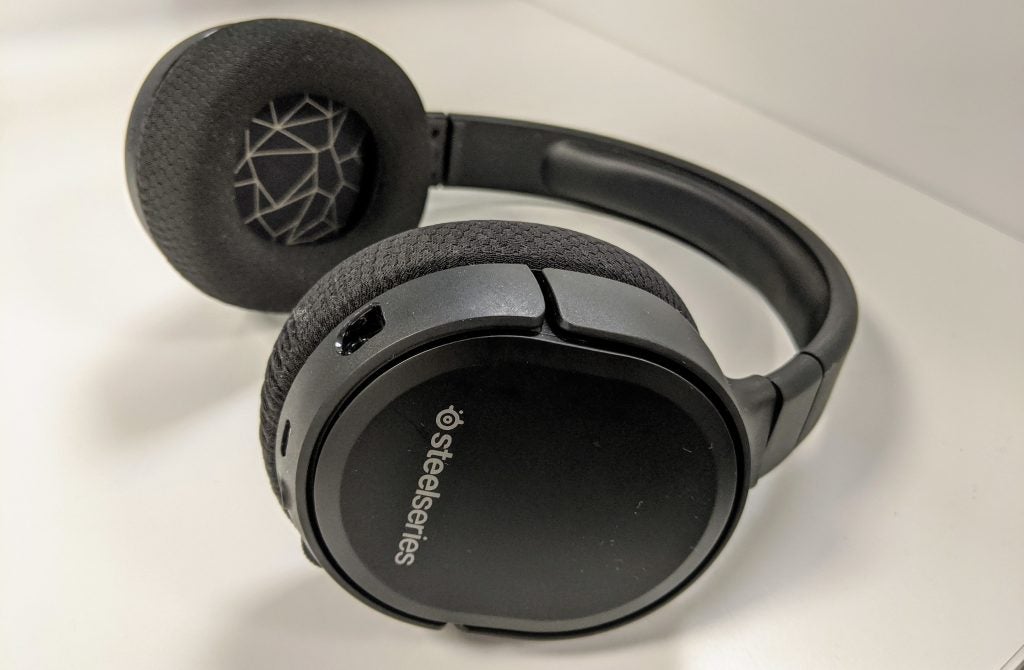 The Arctis 1’s external design is arguably its weakest point, presenting an uninspired approach to both the materials used and colour choices. It’s almost industrial with a dominating use of black across the entire device. The inside of each ear cup is spared somewhat, with small, lightning-esque lines spread across the thin fabric that covers up the technical innards.

Extending the headband will reveal two bits of metal that clamp the headset to the player’s head, while ensuring nothing snaps under pressure. The Arctis 1 is a durable piece of kit, although this isn’t the impression you’d likely get simply by picking it up and placing it on your head. SteelSeries is clearly favouring features over build quality here, and for such a price point we can’t really blame the company.

You’ll find a selection of buttons on the underside of each ear cup. One houses a small power button, while on the other side are buttons for volume, mic output and muting, alongside a 3.5mm jack for hooking your headphones up to devices with a wired connection.

There’s also a micro-USB port for charging. It’s slightly disappointing it doesn’t charge through USB-C, as most modern devices are switching to the new connection format, but it’s hardly a deal breaker. The PS4’s DualShock controllers still charge via micro-USB after all.

The foam padding and plastic frame of the Arctis 1 Wireless is surprisingly light. Being able to shift the frame until it’s sitting flat means this a relatively easy headset to slip into backpack too – ideal, since it spent most of its time connected to my Nintendo Switch.

That being said, it isn’t the most convenient headset in the world; the mic attachment and wireless dongle are so small they’re easy to misplace, if you’re not careful. 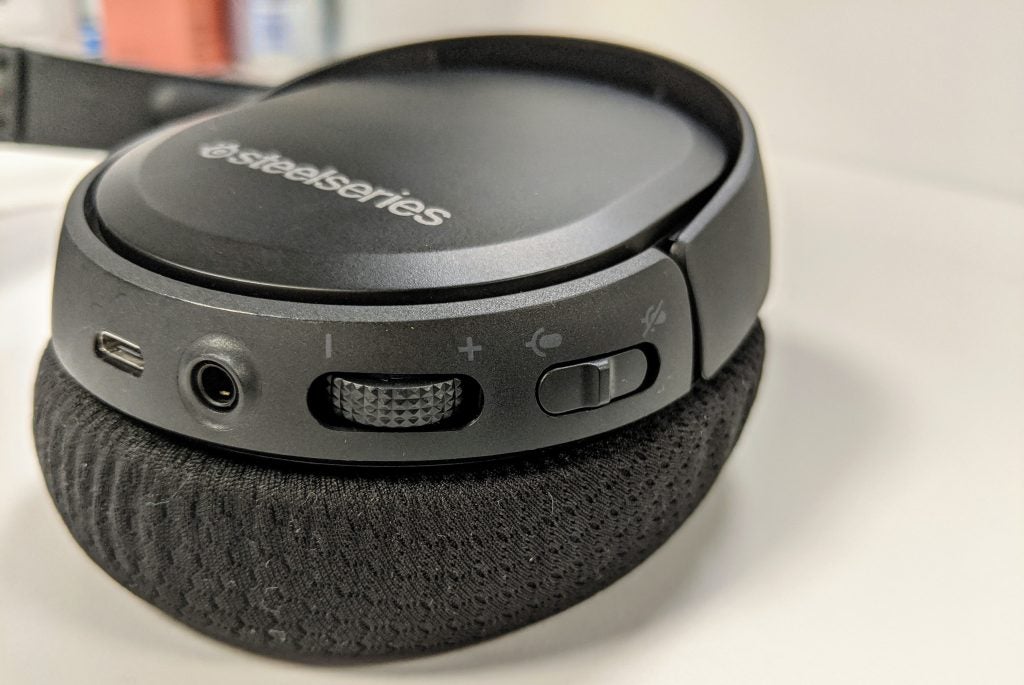 The Arctis 1 Wireless supports the same 40mm drivers found in some of SteelSeries’ other headsets, namely the 3, 5 and 7. As such, you’re getting an equivalent audio experience for a cheaper price.

The Arctis 1 are slightly heavier on the bass though, resulting in more subtle sounds feeling washed out. I found this surfaced a few times in the likes of Fire Emblem: Three Houses and Link’s Awakening, particularly during more hectic moments of combat.

It’s worth noting there’s no surround sound here though. I personally didn’t miss such a feature, but those who want to hear the precise location of footsteps in a competitive shooter will want to opt for something else such as the slightly more expensive SteelSeries Arctis 7, although you’ll sacrifice wireless Switch compatibility in doing so.

Battery life comes in at 20 hours once fully charged, something I can attest to following extensive testing over the past few weeks. If you’re gaming at your desk – rather than from a sofa or faraway chair – it’s wise to plug in the headset, at least on PC or console.

The Arctis 1’s wireless range comes up short next to its siblings at 30ft, although the figure was at least accurate. continuing to work even after waltzing across to the other side of the office – not that you’d ever need to be that far away. 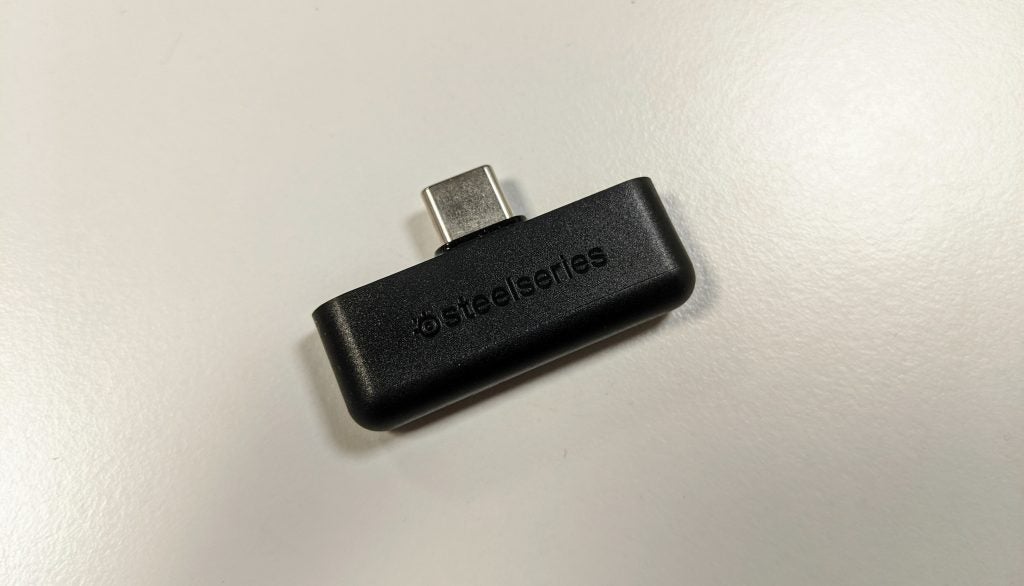 I adored how flexible the Arctis 1 Wireless managed to be when shifting between different consoles and devices. I use a Pixel 2XL as my primary smartphone, and the headset’s dongle connected within seconds. On a train journey I could use the Arctis 1 with both my phone and Nintendo Switch with minimal fuss, ensuring audio quality and feature parity remained robust throughout.

Of course, you’ll need to ensure your smartphone has a USB-C port to work wirelessly with the Arctis 1 Wireless. The majority of modern Android phones use this connection, so that shouldn’t be an issue, but iPhone users are out of luck.

The Arctis 1 Wireless also connects to the PC and other consoles such as PS4 and Xbox One without any issues. You’ll need to use the bundled wired USB-C to USB-A adaptor to do this, but that involves minimal faff.

Should you buy the SteelSeries Arctis 1 Wireless?

The SteelSeries Arctis 1 Wireless is a superb gaming headset. Its connectivity is clearly its ace card here, working wirelessly with PC, select Android smartphones and every modern games consoles including the Nintendo Switch.

Headsets that offer wireless comparability with the Switch are currently rare. The Asus ROG Strix Go 2.4 headset is one of the only competitors, which we will be reviewing and delivering our final verdict in the near-future.

SteelSeries has set a very high bar though, with superb audio, lengthy battery life and low-latency wireless technology making the Arctis 1 Wireless an all-round fantastic gaming headset, regardless of which device you’re connected to.

Looking for a wireless gaming headset for Nintendo Switch? Then it isn’t difficult to recommend the Arctis 1 Wireless. Despite its dull aesthetic, build quality is both sturdy and flexible. Audio presentation is loud, clear and distinctive across all the games I played, while the mic proved exceptional during multiplayer sessions across myriad platforms. You should only look elsewhere if the surround sound omission is a deal breaker.