The M800 might not have familiar CherryMX switches, but the QS1 switch has the same actuation force as CherryMX Red hardware – 45cN. That’s low for a mechanical keyboard and low when compared to other CherryMX switches, and it bodes well for gaming, as it means inputs can be registered with faster, less defined key presses. There’s also no real tactile feedback on offer with the QS1 switch or the CherryMX Red, which means no defined “bump” as the key is pressed down.

There’s one area where the QS1 switch beats CherryMX Red, and that’s longevity. The QS1 switches are rated for 60 million clicks, which is 10 million more than Cherry’s hardware.

The QS1 hardware is impressive. The buttons are consistent and quick, with the responsiveness required for top-tier gaming – there’s undeniable speed to the typing action. 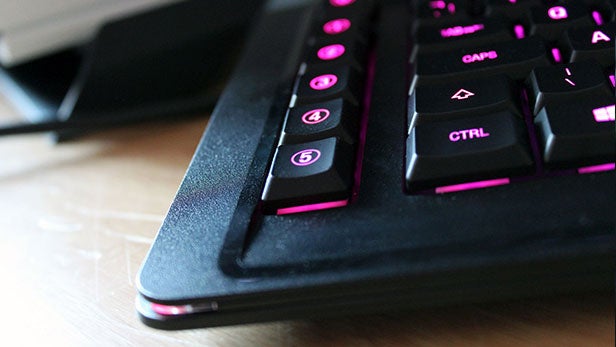 Other aspects of the typing action could be more divisive. The keys are a tad soft and clearly have less travel than the buttons on most mechanical units, and it’s a little tricky to tell if the keys have bottomed out entirely.

That makes the typing action welcoming and comfortable, but it could be off-putting if a gamer is used to the harsher, firmer action of other mechanical keyboards – if that’s the case, the Corsair is a more traditional option. Thankfully, I had no issues with keys sticking or button presses not registering.

The QS1 hardware makes an impact in other areas, too. The quiet design is immediately impressive, as the buttons churn out a subtle, deep tap that’s more reminiscent of laptop or non-mechanical desktop keyboards – a boon if the rattle of a mechanical unit is a source of irritation.

The shorter key travel is noticeable, too. The keys only have about 3mm of travel, which is less than a CherryMX Red unit, and the keys themselves are about half as tall as the buttons on most mechanical units. That means key presses are extremely fast.

That’s not the only bit of design that seems geared towards speed. The keys are set at a lower angle than most mechanical keyboards, with less of a gradient between the rows of buttons. 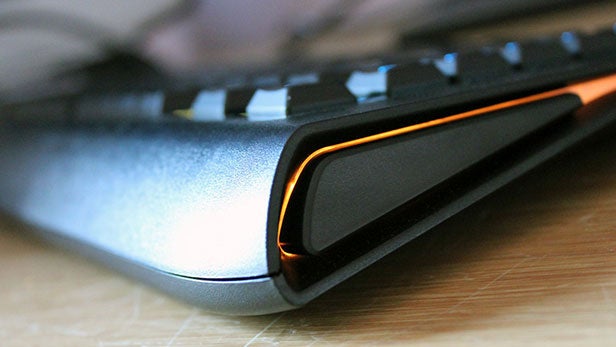 Should I Buy the SteelSeries Apex M800?

The M800 balances new technology with familiar features, and it makes for a largely impressive bit of kit: the QS1 switches mean the typing action is comfortable, reliable and quieter than most mechanical units, and the RGB backlighting is managed using good software.

Corsair’s unit, though, is a similarly impressive: its backlighting and typing action is just as good, and it’s got a couple more features that SteelSeries hasn’t included.

The M800 is an excellent keyboard, particularly if a typing unit needs to be a little softer and quieter than its mechanical rivals. If those aren’t a concern, though, the Corsair remains a little better.

The new QS1 switches work well when compared to more familiar CherryMX hardware, and they help make the M800 quieter and lower-profile than its rivals. This unit is expensive, though, and misses out on a couple of features. That means that this good keyboard comes a close second to the Corsair K70 unless quiet operation is of vital importance.