What is the SteelSeries Apex M500?

In their attempt to stand out, it can often feel as if gaming keyboards are trying to offer every possible feature going. The SteelSeries Apex M500 goes in the opposite direction, however. This mechanical keyboard is a minimal affair, with a focus on competitive play – and, pleasingly, a price that sits below £100.

The most notable features of the Apex M500 are the keys themselves. SteelSeries has opted for tried-and-tested CherryMX Red hardware, rather than in-house switches. Custom-made (or, let’s face it, non-branded) key switches aren’t necessarily bad, but CherryMX kit is consistently the best even if it is slightly more expensive. 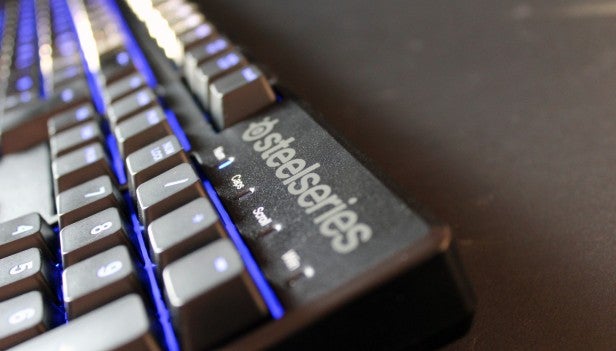 CherryMX Red switches are linear and designed to feel light, which means they require less force to register a click – 45g compared to 60g on others. They also travel a little less distance to register than many other mechanical designs, and there isn’t a noticeable “bump” in the middle of their action. The light, fast design also means they’re quieter than the majority of mechanical switches.

The choice of switch is subjective, but SteelSeries offers only CherryMX Reds in the M500 – a shame, since many other firms offer their keyboards with a variety of switches.

The Logitech G610 Orion is another minimalist gaming keyboard, but that unit is £10 cheaper than the SteelSeries and can be purchased with both CherryMX Red and Brown switches. The latter have a heavier feel and a noticeable bump, which widens the keyboard’s appeal to those who don’t want a linear feel.

The singular focus continues to the rest of the M500’s spec sheet. There’s no wrist-rest, there aren’t any USB ports, and macro keys are absent. SteelSeries hasn’t included a dedicated volume control, with media options relegated to the function keys. 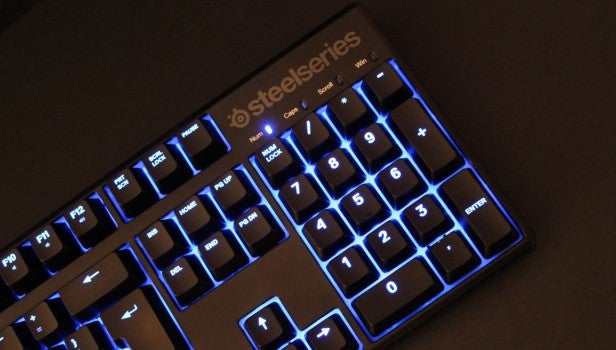 There isn’t any RGB lighting. Instead, the M500 makes do with a blue backlight. It’s initially far too bright and has to be toned down using options on the function keys. It’s a little inconsistent, too: symbols at the bottom and corners of the buttons tend to be darker than those in the middle of each key.

Some features are geared towards this keyboard’s esports demographic. The Apex M500 features programmable keys and rollover for every one of its 104 buttons, and it’s rated for 50 million keystrokes – just like the Logitech.

It’s hard-wearing enough to be lugged to LAN parties. Inside the keyboard you’ll find a layer of steel beneath the PCB, and the rest is made from matte-black plastic. It feels solid, so I’m not bothered by the lack of metal – it keeps the M500 fingerprint-free and presumably brings the cost down too.

The underside of the keyboard sports rubber feet, and the plastic has three valleys for clever cable-routing. It’s a smart idea that I wish was adopted by a greater number of gaming keyboard manufacturers.

The lack of extraneous features does mean that the M500 is compact. It’s 441mm wide, 136mm deep and weighs 1.2kg – a little less than the Logitech in every department. 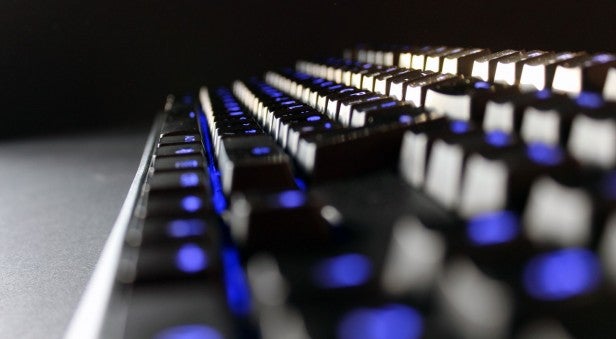 The M500 and its main rival, the Logitech, are similar – the G610 Orion is also missing USB ports, a wrist-rest, RGB lighting and macro keys, although it does have a volume roller. It also has only 26-key rollover.

To get some of those extra features you’ll need to spend a little more for the £110 QPAD MK-90. That keyboard does include USB ports, RGB lighting and a wrist-rest, but it doesn’t have CherryMX keys and it isn’t as sturdy either. That makes it a better option if you value extra features over the typing experience.

The lighting and macros are handled in the familiar SteelSeries Engine 3 utility. It’s a simple and accessible piece of software, which is no surprise given the Apex M500’s minimal design.

Most of the keyboard’s options are accessed from a single screen, with illumination tweaks and key programming options all available here. A window opens for the straightforward macro-recording tool, and nothing has been cut back here – you’ll find every option that you’d expect from a keyboard with a greater number of features and a higher price.

The M500 supports a near-unlimited number of profiles that can be linked to games. The limited features on the keyboard itself restrict what can be done with software, but everything here is fast, accessible and easy to use.

There’s a lot to like about the CherryMX Red keys: they’re smooth and quiet, and the steel base gives them a pleasing snap. The 104-key rollover means there’s no chance of ghosting.

The keys are solid and consistent, with little change in feeling, even when using the larger space and return keys – something that was an issue on the Logitech, which suffered from a noticeably soft response on the larger buttons. 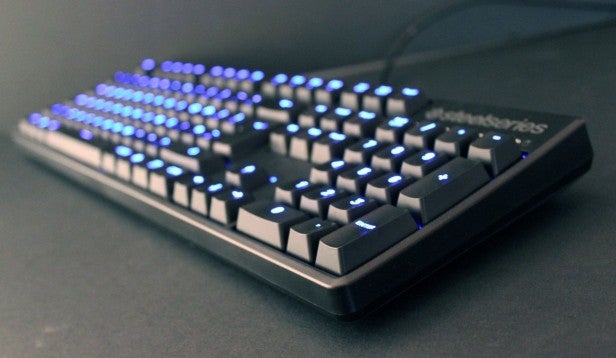 This consistency is a huge boon for gaming, and there’s no doubt that the M500 serves up the speed and snap required by top-tier players. The only potential issue is that CherryMX Red keys lack the harsher and more tactile feel of CherryMX Brown buttons.

CherryMX switch preferences aside, issues are minor – and depending on your opinions, they might not be issues at all. The function key is on the right-hand side, which takes a little adjustment, and the absence of a wrist-rest might prove uncomfortable for long gaming sessions.

There are a couple of quibbles, but the SteelSeries just creeps ahead of the Logitech. Both CherryMX Red units are better than the QPAD MK-90, which ditched CherryMX hardware for third-party switches, but could only deliver a stiffer action and inconsistent key registrations.

Should I Buy the SteelSeries Apex M500?

SteelSeries has designed the Apex M500 to appeal to hard-nosed esports players, and I can’t quibble with that: the CherryMX hardware makes for a high-quality typing surface, and the sturdy design ensures it will survive trips to events.

That makes this device fantastic for gaming, but the lack of features mean it’s tricky to recommend for those who use their PC for a wider variety of tasks – there’s no USB, no wrist-rest, no customisable lighting and no macro keys.

The M500’s main rival, the Logitech G610 Orion, suffers a similar dearth of features and a marginally poorer typing performance. The QPAD MK-90 has weaker typing but a greater number of features. Sadly, it’s unlikely that you’ll be able to get great typing and every feature for less than £100. If you want that, you’ll need to fork out closer to £150.

If you want a simple, high-quality mechanical keyboard for not too much money, the M500 is excellent. It’s my mechanical choice for less than £100.

The SteelSeries Apex M500 is a great option for competitive gaming or if typing quality is key, but spending a little more will deliver the features that the M500 is lacking.