Before you can start enjoying Steel Division: Normandy ’44 you really need to get your head around it. Normandy 44 is a strategy game that you play in real-time, but not an RTS in any sense that your average StarCraft or Command & Conquer fan might understand. There’s no resource-harvesting and no base-building, and you can forget about lassoing units and clicking on the nearest objective. Deep down, Steel Division is a wargame in RTS clothing, and you need to treat it with respect.

As you can guess from the title, it’s set during World War II and the immediate aftermath of the D-Day landings. The action plays out over large-scale maps, based closely on actual aerial reconnaissance photos from the period. There’s a solo campaign, featuring three sets of missions focusing on specific operations seen from the American, German and British points of view, plus a Skirmish option which brings additional French and Canadian forces. With 400 different, historically accurate units to field or fight against, Steel Division’s hard to criticise on either breadth or depth.

Here’s where things get complex. Players begin each battle by forming or customising Battlegroups – the collection of units you’ll have available to bring into the fray. Once you’ve fixed your Battlegroup it’s time to begin requisition and deployment, buying units from your Battlegroup with your available requisition points, then placing them on the battlefield in the specified zone. While you’re at it, you can also select each unit and give them their initial orders; infantry and artillery units come packaged in suitable transport, so it often makes sense to tell them where to go and deploy upfront. With that done, it’s time to launch the battle proper. 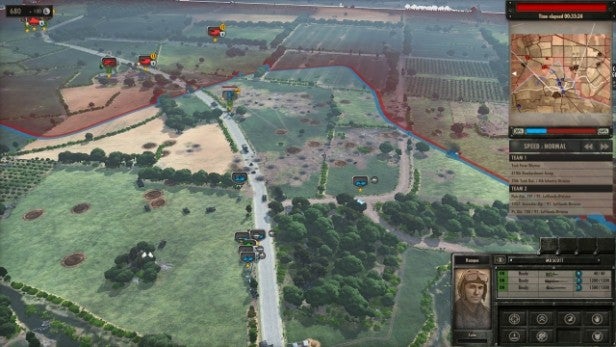 Now for the next few twists. First of all, each Steel Division battle goes through three different phases, the phases determining which units you can deploy. Your requisition point tally keeps climbing, minute by minute, but some of the most expensive and powerful units can only be brought into action in the first or second phases, and there’s always a question over whether it’s wiser to splash out on the big guns or reinforce with weaker but cheaper units.

Secondly, Steel Division has an active frontline; an instant, constantly shifting visualisation on the battlefield that shows exactly who’s dominating and where. In Skirmish, you get victory points for the percentage of the map you control, so the frontline isn’t just informative, but a very big deal.

In the campaign missions, you have specific objectives. There are bridges to defend, armoured columns to ambush, artillery and anti-air to be destroyed. To meet them, you keep moving and deploying units, hoping to either destroy the hostile forces or suppress them to the extent that they’ll surrender.

There’s a lot to deal with here. Cover matters, whether it’s moving troops inside mansions and farm buildings, hiding mortars out of line-of-sight or pushing infantry to use Normandy’s woods and hedgerows to sneak up on the enemy and minimise the damage. 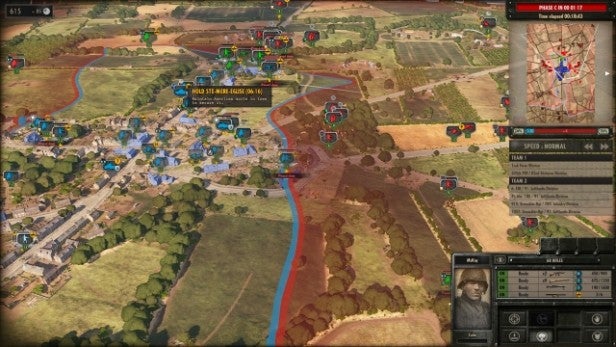 Transport and support matters too. Not only is transport and support key to getting troops where they need to be, unscathed, but many units that a more basic RTS would treat as cavalry or artillery play an anti-infantry, anti-tank or anti-air role rely on it. Without support units your other units run out of ammo, making them virtually useless on the battlefield. Some support units can also call-in help from off the battlefield, so if you want naval bombardments to wipe out a nest of enemy Panzers, you’ll need to get your spotting units out there first.

Recon, meanwhile, plays an absolutely crucial role. Not only will scouts, spotting planes and mobile jeeps keep you aware of enemy movements, but certain units – particularly tanks – need line-of-sight or assistance to fire effectively. If you can’t keep on top of recon, you’ll be missing opportunities that might turn the tide.

All this adds up to make Steel Division a bit more demanding than your average RTS, both in terms of all the stuff you have to do and the tactical and time-management skills you’ll need. This was bought home to me when, after an initial set of Boot Camp tutorials, I was thrown into my first trial Skirmish and promptly whupped in humiliating fashion by what I believed would be an easy AI. 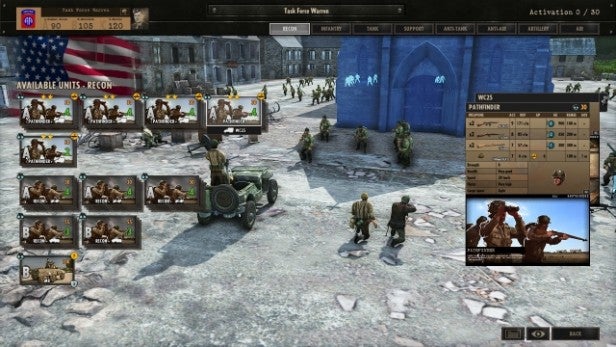 I was making every mistake going: throwing troops into the field but abandoning them in their transport; giving infantry too much distance between their drop-off point and cover; not making enough use of recon and anti-aircraft units. While the interface deserves some blame for over-complicating simple operations, I deserved everything I got.

For a lot of people, this will be Steel Division’s biggest problem. There’s a definite barrier between playing the game and enjoying it and Eugen has deliberately set it high. There’s no real sense that the campaign is taking you from a beginner to an expert, building your skills. The missions start at Medium difficulty and then scale up to Hard and Very Hard. The AI isn’t faultless, but it doesn’t take any prisoners. Time limits are tight and stupidity is punished without mercy.

Patience and attention to detail are basic requirements, as is not just knowing but caring what makes one of six different tanks or recon units different from the others. The pace is weird, sometimes slow then suddenly too fast to cope with. I don’t like to say it, but Steel Division can be hard work.

But with the patience and the will to learn, Steel Division can also be exciting and absorbing. By the time the campaign had me holding off German divisions in a central village while exploring for anti-tank guns behind enemy lines, I was having a good time. Massive-scale battles with multiple tank groups rolling around the countryside, machine-gunners and bazookas garrisoned in the towns, aircraft looping and duelling overhead, makes all that strategy seem pretty cinematic. It is, as I said, a wargame, but not as dry as the usual efforts. 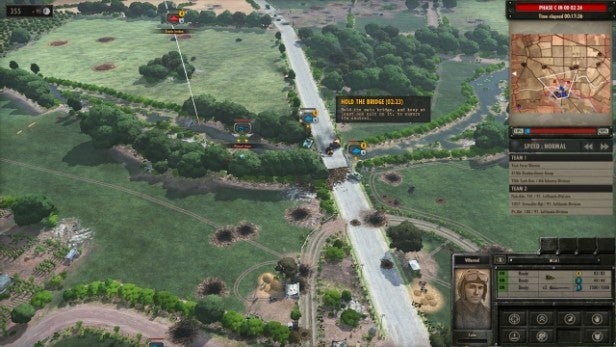 Between the campaign and Skirmish and the different forces, solo players won’t be short of content. Merely building different Battlegroups and trying them on for size could keep you occupied for weeks. Yet there’s also plenty of potential here for multiplayer action, with the game supporting huge battlefields and up to 10 v 10 players online. I’ve barely had the time (or skill) to scratch the surface, but if you want serious strategy, decisive tactics and historical detail, Steel Division should give you what you’re looking for.

Just be aware, though, this is no Company of Heroes. It’s not a game of cut-scenes, drama, scripted tales of heroism, sweeping scores and engaging characters. It looks great, with an engine that scales almost instantly from a stratospheric view to pinned-down Tommies on the ground, but it’s no AAA blockbuster. The presentation is often basic, and voicework is either repetitive or shockingly poor.

In other words, you have to ask yourself what you want from a strategy game. Do you want an easy time with lots of wham-bang action, or something deeper, more complex and more accurate? Do you want Hollywood or something closer to history on your screen? If your erring towards the depth/history side, Steel Division might be your new go-to strategy title.

For all Eugen’s attempts to position Steel Division as an action-packed RTS, it’s still a niche game aimed primarily at wargamers, where complex strategy and historical accuracy matter more than cinematic action beats. That’s not a criticism. While it could do with an easier difficulty curve and some sensible streamlining, there’s a place for a World War II strategy game where authenticity and detail count. If you think you can handle the workload, sign on up.