Don’t Talk and Nobody Explodes was a great PSVR puzzle game, so long as you were willing to get into a massive argument with whomever was helping you disable the bomb. Tarsier Studios is looking to deliver a similar brain-bending experience with Statik, although this time the only person to yell at if the solution isn’t found is yourself. Getting the chance to play a couple of its puzzles, I love its incredibly smart and intuitive design, I just hope there’s enough content here to make me want to stick around.

Statik: Institute of Retention is a very simple puzzle game where you play a test subject whose hands are stuck in a box, and must solve puzzles littered around the box in order to free them. There’s always an examiner in the room watching you, explaining the rules in a quaint British accent, but in no way offering any sort of help or words of encouragement. Their face is also blurred, making the whole thing feel a little eery. It’s very reminiscent of the narrator of Headmaster, another brilliant PSVR title. Much like Don’t Talk, you have to solve all the puzzles before your hands are free and this “level” is complete. 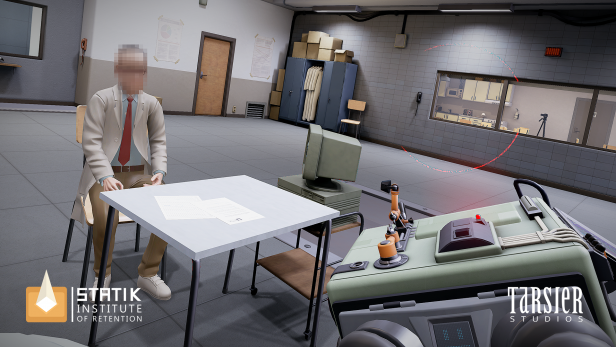 Naturally, as your hands are in the box, you can’t exactly roam around and grab solutions to free them, and this is where Tarsier’s great intuition comes in. The over-tutorialisation of modern games is a consistent bugbear of mine, where buttons and mechanics are explained to you before ever getting a chance to experiment and learn boundaries of a game. But Statik actively encourages you to press every button on the Dualshock 4 as soon as the puzzle begins, as each button press will do something different on each box.

It can be quite hard to explain, but the first two images of this article represent the first box puzzle I played, and at first there wasn’t anything sticking out from it, just a series of small orange crane-like arms, some dials and a miniature projector. Hitting the face buttons saw the dials turn and the cranes hands spin, while the D-Pad saw sliders move up and down. Pressing L1 causes a huge circular slider pop up from the top of the box – I soon learn this is where I load slides into the projector – and the D-Pad allows me to slide one crane arm down to choose different slides to feed into the projector.

The only problem is I can’t access the slides without solving the first puzzle. I won’t spoil how its done here, but eventually I work it out and steadily move through the sequence of solutions before finishing the box.

The really satisfying thing about Statik is its stream of ‘lightbulb’ moments, where simply looking around the room I’m in, or using the right combinations of buttons will soon see the solution present itself, and there’s that initial rush of feeling like a genius as all the cogs suddenly start turning and real progress is made. 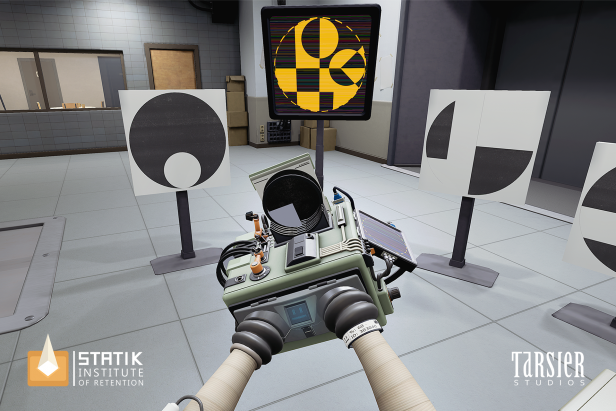 The downside to this are those moments where you feel genuinely stuck, and hit a blockade where the only way to overcome is to have somebody tell you the solution or look up a guide.

You can, of course, persist with finding a solution but at one point in the second puzzle I simply felt like I’d tried everything and still couldn’t solve it. It was only after I was told by the on-hand Sony rep that it was more obscure because I had solved problem B before A that it then became clear what I had to do. As is always the risk with intuitive puzzle games, sometimes you don’t get it until you “get it”, and this can lead to frustrating moments where you’ll want to just throw your hands in the air, only you can’t because they’re stuck in a box.

As a puzzle game, the other risk with Statik is how long the experience lasts. I’m not sure how many puzzles there are in total, there appeared to be at least eight in the main menu, but it seems the only way to increase the longevity is by getting stuck in each of its puzzles. The first box took me about five minutes to solve – granted it was the easiest of the bunch – and the second took a little longer, and I was told the solution to one puzzle, which helped speed the process along, but I hope there’s enough puzzles here so that I don’t steam through the entire game in just a couple hours. 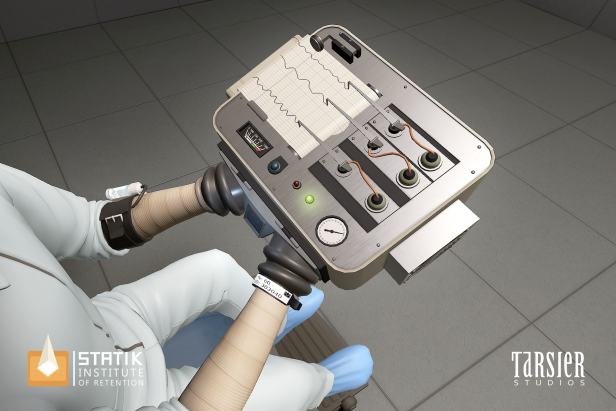 Sitting down and solving the puzzles is really fun, and virtual reality really adds to the experience as it feels much more tactile looking all around the box at its conundrums and for solutions hidden anywhere in the room, but once you know the solution, that’s it. There’s no reason to play that puzzle again, no alternative endings or different choices to make.

But at only £15.99 even if it is just a handful of puzzles, it’ll still be a great bit of fun for an evening of puzzle-solving.

The tactile nature of Statik makes it an excellent VR title. Being immediately encouraged to press every button on the controller and investigate the puzzle before you feels incredibly natural and comfortable, it really is great fun to tackle these puzzles at your own pace and fiddle around with their systems without being told what each button does every time in tutorials.

The only downsides are what always occurs with puzzle games: the frustration of finding a solution and the lack of longevity once the solution is found. As a digital-only title at a very cheap price, I think the longevity issue can be quashed.

This is certainly a game I’ll be buying come April 24, and has made me want to hook up my PSVR headset once again.