State of Mind is like a DVD box-set that you started last week and are determined to drag yourself through to the end of – because damn it, you’ve invested the time now, and you demand some resolution. It will pull you ever forward towards its credits. But once they’ve rolled, Daedalic Entertainment’s new, near-future-set narrative adventure won’t last long in the memory.

Perhaps you’ll remember that one pivotal revelation, that occurred roughly midway through a running time that’ll occupy a handful of evenings. Maybe a striking view over a utopian-styled cityscape, as seen from a high-rise window. But the majority of the story beats, the motivations of the characters, and the reason why you went through it all? Probably not. 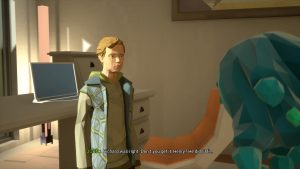 State of Mind is an experience that passionate fans of Telltale Games and Quantic Dream productions will undoubtedly get the most out of. A third-person walk-and-talk ‘em up, with a small degree of open-world exploration to stretch out its waypoint chasing, its story is almost completely linear, with decisions that the various player-controlled characters make having next to no impact on what happens.

Until the very end of proceedings, that is, when some literally life-or-death choices need to be made. That these come out of nowhere is just one of the game’s repeated lurches of tone – another arrives when the bearded character on the box art, Richard Nolan, reveals more about himself. Which is to say, you may well hate being in his company long before the end. 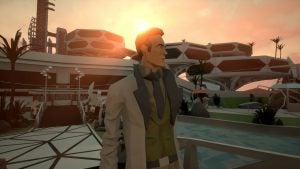 The game’s ever-changing mood is qualified in some measure by the fact that you assume the role of several very different people during a story that tries to twist transhumanism with family breakdowns, the evolution of artificial intelligence and robotics with the mental stresses of sex workers, and corporate greed with terrorist propaganda. Keeping tabs on how this person’s previous activity relates to another’s current objective can be a challenge, albeit more due to the tedium of witnessing so much generic sci-fi hokum play out, rather than any nuanced ties that bind the game’s major players.

State of Mind is absolutely at its best, narratively, when focusing on the smaller things: a homeless, hopeless girl brought in from the cold, rainy New York streets and given a chance to start over; a young boy pulled in every direction by warring parents whose explosive egos have derailed any chance they had of playing happy families. In these scenes, the divisive sheer-polygon aesthetic – and I lean towards the dislike side of that divide – that dominates almost fades away, allowing relatable emotion to come through. Whenever that’s not the case, though, it’s like watching a dystopian soap opera set inside SEGA’s Model 1, Virtua-series engine. 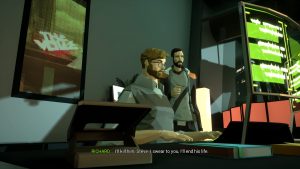 Atmospheric music and a couple of half-decent vocal performances go a long way to anchoring the player to State of Mind’s rain-lashed Berlin of 2048. Not that you’ll always be here, with the game switching both locations and years with head-spinning abandon.

Foremost amongst these is Geralt of Rivia himself, Doug Cockle, as Richard – but Alexa Kahn, who provided additional voices in Horizon Zero Dawn, is great as Lydia, a character whose deceit later gives way to redemption; and Ronan Summers, previously heard in Mass Effect: Andromeda, gives Richard’s VR world alter-ego Adam more personality than a soulless digital construct deserves. 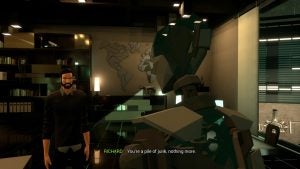 Yes, you read that right: VR world. Part of the time in State of Mind, you won’t be in the real world at all. Adam’s story chapters, which comprise a decent chunk of the overall game, all play out in City5, a grand metropolis that’s contained within almighty servers. It’s the bright and shining yin to the gritty and grimy Berlin’s yang – though New York is also looking pretty grubby here, too. And does it ever stop raining in the near future?

Adam’s relationship to Richard is crucial to State of Mind’s central story thrust – and if you don’t connect with it, you’re not going to feel especially invested in either character, their ultimate fates, or those who rely on them. Personally, I ended up rooting more for Adam than Richard, once the latter had shown his true colours – and as such, was left cold by the denouement that unfolded. (For what it’s worth, that relationship has been explained in previews, but I won’t spoil it here as its reveal is a massive moment in the game.)

When you’re not walking and talking in State of Mind, you’re solving extraordinarily simple puzzles – match three pieces of evidence, switch the sections of this wobbly image around until they create a room, and so on – or piloting fiddly drones through some drawn-out stealth sections. At one, late-game point there are even shooting sections weirdly reminiscent of (and you may need Google here) the camera-switching gameplay of the Mega CD’s Ground Zero: Texas. To return to my earlier point on State of Mind’s tonal inconsistency, these interludes are out of place, go on too long, and none of them are entertaining. 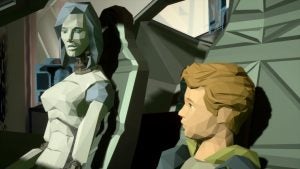 There are no glitches or bugs of note to be worried about here. Sometimes animations seem to skip a couple of frames, and the cuts from scene to scene can be a little too snappy, conversations beginning before the screen has fully faded back from black. But really, State of Mind isn’t a game where the odd bit of control weirdness is going to damage your progress. There are no timers, never any need for swift reactions. There is no risk, whatever the supposed stakes.

State of Mind clearly has ambition to burn, and buried within the messiness of its multi-faceted story is something worth holding onto, a simpler and more direct idea that could make for a great sci-fi short. Its visuals are a design choice that has to be respected, but the stiff faces and lanky limbs regularly rob key scenes of meaningful dramatic weight. With only minor player agency, its replay value is restricted to trophy hunting. It’s no disaster, but State of Mind delivers only disappointingly forgettable returns on some significant pre-release promise.