Available on Xbox One and Windows PC

“I’m putting it in the bloody storage!”

That’s what I ended up yelling at the TV screen less than an hour into State of Decay 2, Undead Labs’ long awaited follow up to its 2013 post-apocalyptic zombie survive-a-thon. My outburst was down to the frustratingly unclear directions offered in the early stages as it guides players to deposit a rucksack into the storage area of your nascent community of survivors.

The problem is, you have a storage locker, where you place your health items, ammo, craftable materials and so on, and a separate area for dumping community resources you scavenge from exploring. The maddening cherry on the cake of aggravation is that while the game is telling you to put the rucksack into storage, it’s the locker that’s most obviously highlighted on screen. Turns out, the storage area is just a big random space in another part of the room.

Buy State of Decay 2 from Amazon

Not a great start to my time in the zombie-infested remnants of society, and much to my chagrin, such terrible and contradictory sign-posting is a hallmark throughout the game. Other highlights include a weirdly persistent message to investigate various features in your safe house, usually when you’re actually using them, and map markers that don’t quite match up with where you need to go. 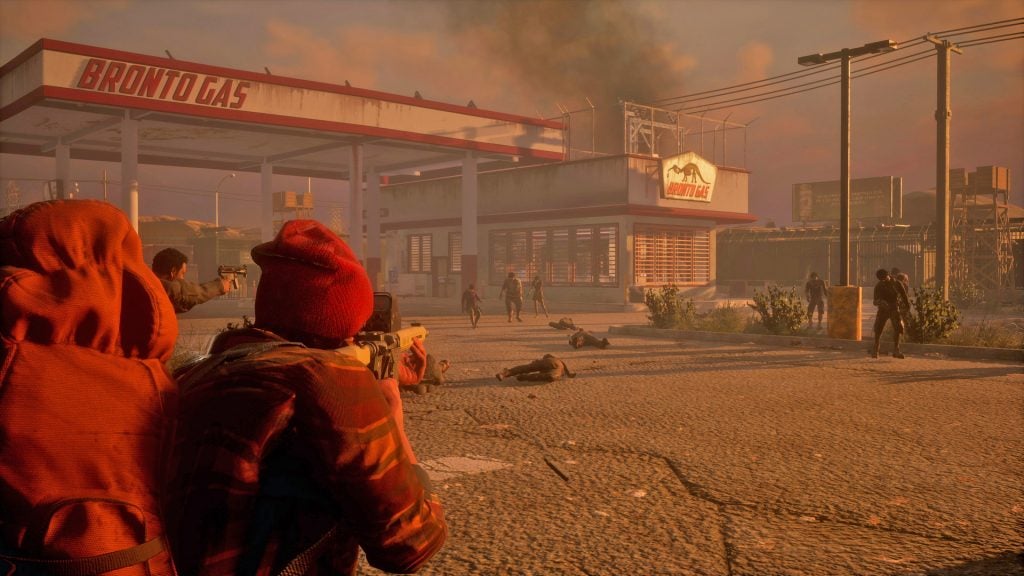 Yet if you persist through State of Decay 2’s shonky visual signposting, the game proves itself a solid improvement on its forebear, despite essentially offering more of the same. Like that first game, the emphasis here is on building a strong enclave of survivors, with the challenge coming from security and resource management more than the walking dead themselves. However, the world is larger and, thanks to a shift to Unreal Engine 4, looks better than ever. There’s more to do too, from building bigger encampments and developing communications between your citizens, to establishing relationships with other enclaves of survivors.

Survivors really are the heart of the game, and mark perhaps the single biggest enhancement over the first game. Although every character is randomly generated, the data pool the game draws from to create them is much larger, leading to a far more diverse and interesting cast. Each human possesses certain traits that determine personality, behaviour, and their benefit to your nascent community if recruited, with around 1200 traits that can be combined. Some will offer clear boosts – medics or counsellors help maintain health and morale, gardeners can keep food growing, mechanics keep tech working – while others may have negative attributes that either weaken them individually or place strains on your encampment.

As you switch between controlling each of your survivors, either to make use of their specialist skills or just to allow one you’ve been playing as for a while a chance to rest, you’ll be able to develop certain stats. This is mostly an automatic process – sprinting improves stamina, making stealth kills increases wit, melee combat boosts fighting, keen marksmanship enhances shooting, and so forth – and hitting certain levels allows you to pick specialisations in that category. This further builds the individuality of each human in your charge, making you care more about their safety.

This all makes State of Decay 2’s perma-death system all the more impactful. When a character dies, you’ll feel the loss personally. If a particularly pivotal survivor is lost, it can upset the entire ecosystem and lead to the collapse of your whole community. Still – lessons learned for when you restart, and with three huge areas to set up shop in, you’ll be able to test out different strategies to try to maximise survival chances. 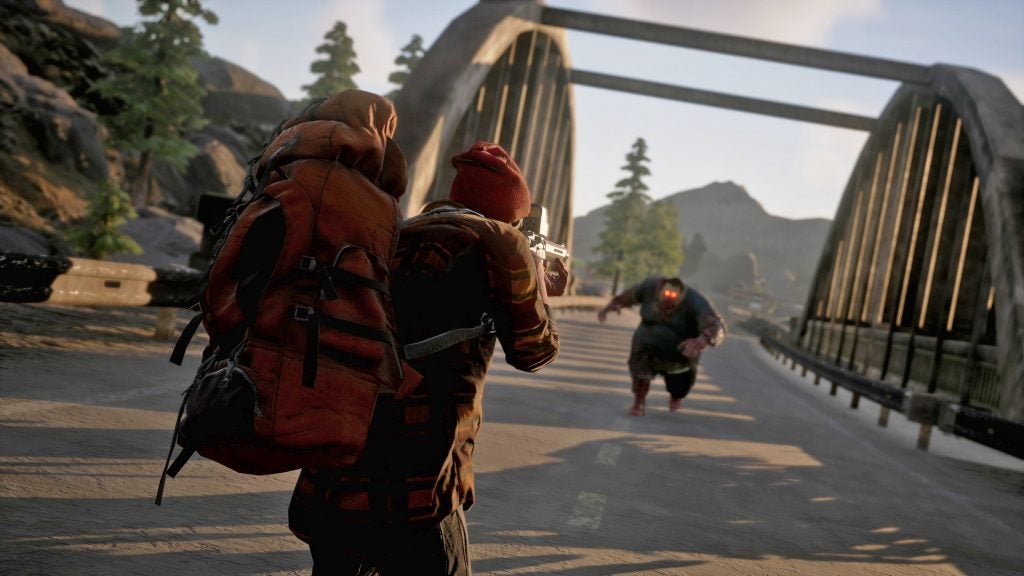 Another big change from the first State of Decay is the introduction of ‘blood plague’, an infection borne by a new type of zombie. Easily marked by their red, oozing corpulence, these undead can transmit a slowly worsening condition with a scratch. To cure it, you’ll need to hunt down plague samples, to create medicine back at your base camp. Such hunts offer some of the game’s few real horror elements, luring you to buildings of deep infection where pulsating ‘plague hearts’ must be dispatched. Being drawn into claustrophobic, dimly lit buildings where body-horror infection sacs attract the game’s most ravenous zombies offers some genuine thrills, away from the constant balancing act of resource management elsewhere.

Blood plague exists in addition to the returning infestations, where nearby buildings might randomly see a cluster of zombies start loitering. However, combat is a mixed bag even with a host of walkers to take on, and sadly doesn’t really improve much as you progress through the game.

The more I’ve played, the more I’ve realised stealth is effectively the only way to go. Sneaking up on the undead and shanking them is the easiest and safest path, and you’ll be able to pick off even reasonably-sized gatherings by doing so. The problem is, that starts getting a bit boring after a while, and when you factor the time constraints you’ll be under to complete the more survival-oriented objectives, it starts to frustrate. That said, it is rather satisfying to rush a solitary zombie and punt its head off if your currently-controlled survivor has high enough cardio and fighting stats, but it’s not really a viable long-term strategy, especially as weapons begin breaking.

Certain zombie types do require different tactics though, which adds at least a flash of variety. Screamers absolutely demand stealthy takedowns, lest they spot you and summon more zombies, while Bloaters, which emit a lingering toxic cloud upon death, are best dispatched with ranged weaponry. The catch there is that unless you have a silenced weapon or similar, the noise will attract even more zombies. 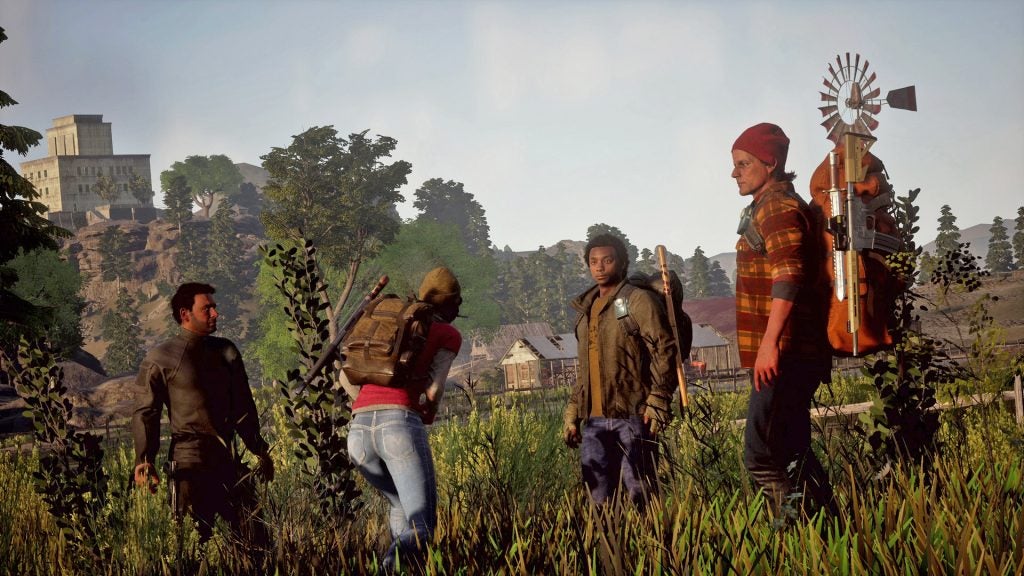 Noise in general is the biggest enemy in State of Decay 2 in fact, whether its barging open a locked door, bungling a rushed search of a storage unit, or cacophonic combat. Anything above a virtual whisper attracts the undead, reinforcing the need for stealthy play. Sadly, even if you do lure in a horde of zombies, fighting them off still isn’t terribly exciting.

The exception to the combat woes is actually other humans, especially rival enclaves who you might get off on a bad foot with. This partly comes back to the strength of the character system, and the unpredictability of the personalities generated, but either way, getting in a ruck with a disagreeable group of the still-living typically results in faster and more satisfying, if often heart-wrenching and tragically pointless, altercations.

What ultimately irritated me the most about State of Decay 2 was the Sisyphean feeling of being trapped in a constant uphill battle. There are so many disparate systems and events to keep track of, so many needy survivors griping over dwindling resources, that it becomes almost depressing to play. And yes, that’s very likely the point – aside from the cathartically dumb likes of Dead Rising, the zombie apocalypse isn’t meant to be fun, and in creating a sense of creeping desperation and nihilistic panic, this is an unmitigated success. Anyone wanting to feel like they’re actually making headway in staving off humanity’s extinction may want to look elsewhere. 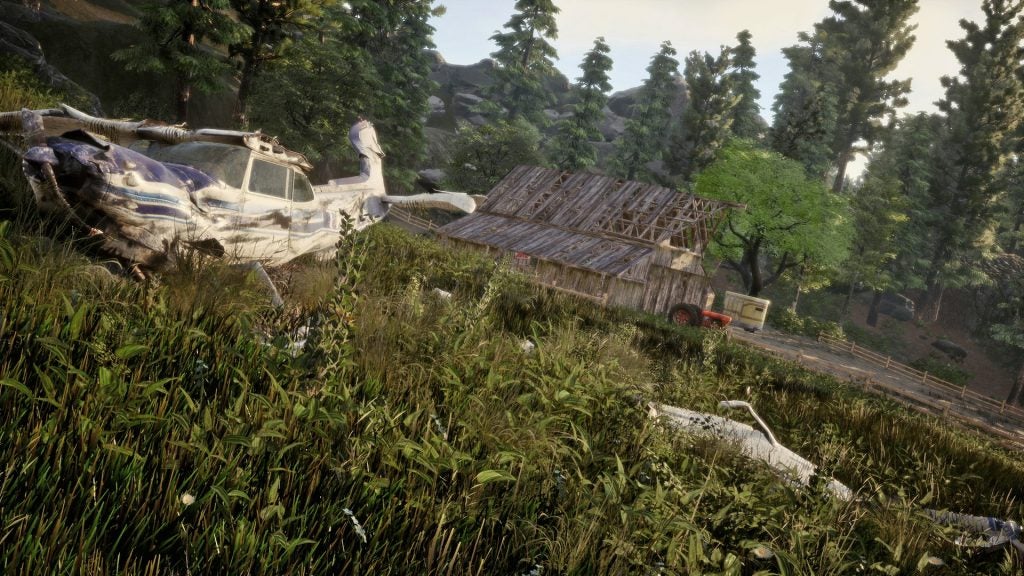 An improvement on the original, and with far more variety on offer, but State of Decay 2 suffers from repetitive combat and poor player communication throughout. Fans of survival sims will likely appreciate the greater attention to detail and increased demands when it comes to sustaining your communities, but for more casual players the constant need to find dozens of items or resources just to keep everything ticking over will just annoy, the longer you go on.

Buy State of Decay 2 from Amazon

If you can hit that sweet spot where you’re actively managing an enclave’s demands this becomes a lot more enjoyable without losing the tension that everything could fall apart, but that’s a big “if”.