Sony’s Start the Party! was one of the original showcase games for Move; a collection of oddball mini-games which focused not just on motion controls but on the way the Playstation Eye camera could merge computer-generated imagery with the real world.  Like the PS2’s EyeToy before it, you could see it as a forbearer of the kind of ‘augmented reality’ gaming being done on the 3DS and Playstation Vita. Start the Party! Save the World! takes a similar tack, with twenty new mini-games, some new co-op features and more of a theme to tie it all together. 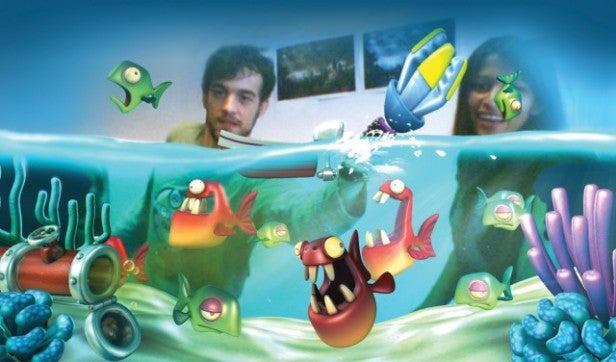 This time, it’s all about finding the biggest hero in your lounge, as the evil Dr Terrible endangers astronauts, speeding trains, divers and sailors using a horde of evil aliens, wriggling octopi and dangerously psychotic bears. Each mini-game has you pictured in some way on the screen, with the Move controller transformed into a saucepan to catch falling divers, a mallet to whack attacking bears or grabber with which to grab struggling divers. There’s also some nice interaction with the screen, as you may find you have to stick your arm through a large, square porthole to rescue the aforementioned naval types, or step behind the right door to repair malfunctioning robots. It’s fairly hectic stuff.

There are two main ways to play the game. Firstly, either solo or multiple players can pick specific minigames to play, while in party mode you can also ask the game to pick a short, medium or long selection for you. It’s also possible to play the game in a survival mode, where the game throws mini-games at you at speed and as long as you stay scoring you survive. In a nice touch, in each activity there’s room for a second player can grab a controller and do something, either steering deadly jellyfish into a diver’s path or controlling an alien who can blast right back at your space-fighter. In some cases there’s some leeway for them to help you, but – who’s kidding – most of your so-called friends and family members will do their level best to stuff your score. 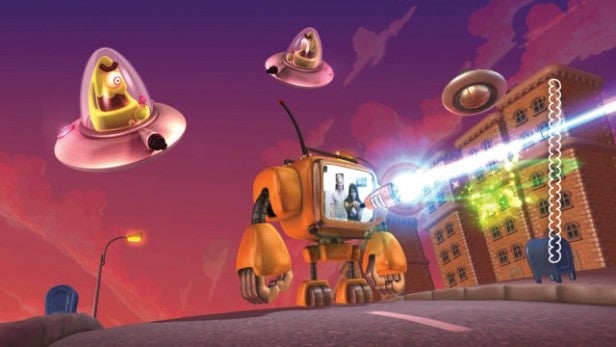 Now, the trick of these mini-game compendiums is the same as with a TV comedy sketch show; it doesn’t matter if all the sketches don’t work out, as long as the show maintains a high strike rate. Here the strike rate is pretty good – indeed stronger than in the very patchy Start the Party! A few of the mini-games are fiddly or not explained properly, but in most cases it’s easy to work out what’s going on and the controls are intuitive. The graphics and the characters still have that slightly twisted quality that worked so well in Start the Party!, and there’s plenty of fun to be had. In fact, that goes double if you’re playing with very young or quite inebriated players.

However, Start the Party! Save the World! has one major problem: there simply aren’t enough mini-games to go round. With just twenty activities on offer, a few of which are variations on a theme, it’s not that long before you feel like you’ve seen and done everything. When you think about the way the game is played, in a living room with mates or relations on an occasional Saturday night or Sunday afternoon this isn’t a complete disaster, and the game can easily be found for under £15. However, there just isn’t quite enough novelty value here to make the grade. With a third more mini-games and a bit more imagination, we’d have happily handed out a higher score.

Verdict
Start the Party! Save the World! is a solid mini-games compilation which makes good use of the augmented reality potential of the Playstation Eye and Playstation Move. The games are mostly fun and always well-presented and it has plenty of party potential. If only there was more of it to enjoy.