Available on PS3
Tired of over-hyped, underwhelming shooters
that don’t have two ideas to rub together? StarHawk might just be the
antidote. On the one hand, nobody could accuse it of being over-hyped.
Few of us would have put it on our 2012 gaming wish list, and it’s the
sequel to a game – WarHawk – that could best be described as a cult
online hit in the early days of PS3.

On the other hand, StarHawk is a
game that exceeds expectations. It’s not the most visually dazzling,
richly atmospheric or thrilling shooter around, but it has a fresh take
on old genres and a clutch of good ideas, and it’s all been executed
with a high degree of polish. We doubt this quote will make the box, but
StarHawk is surprisingly good. 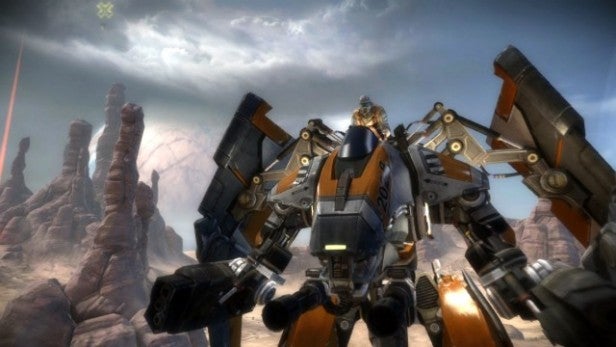 A mish-mash of ideas
It’s
not that the ideas or concepts are particularly new. StarHawk is a
hybrid of shooter and RTS genres, with elements of Gears of War,
Starsiege: Tribes, MechWarrior, Red Faction and Battlefield, but with
streamlined aspects of Command and Conquer, Dark Reign and StarCraft.
This isn’t revolutionary – Battlezone was doing the same thing back in
1998, and Section 8 has similar ideas at work three years ago – but it’s
probably the best implementation we’ve seen. StarHawk has just enough
strategy to make it more interesting, but not enough to detract from the
blasting at its core.

The plot and setting take the same magpie
approach, and it’s not hard to see chunks of Joss Whedon’s Firefly,
James Cameron’s Avatar and Robotech/Battlemech in StarHawk’s sci-fi
western premise. In the future, mankind has colonised the planets and
thousands of pioneers have laid claim to mysterious energy sources known
as rifts. However, rifts can have a corrupting influence, transforming
some prospectors into outlaw mutants who will go to any length to get
more rift energy. 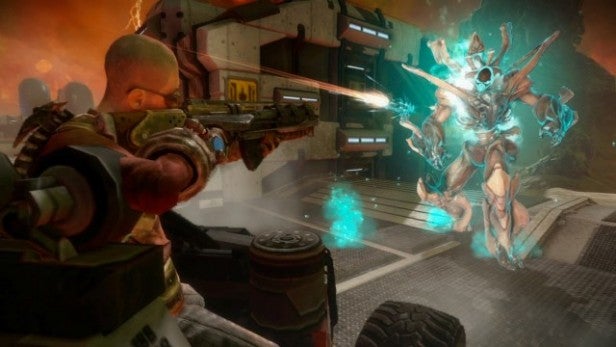 StarHawk’s single-player hero Emmett Gray is
himself half-mutant, able to absorb rift energy but still in touch with
his human side. Acting as a kind of gun-for-hire, it’s his job to make
sure that energy is collected and safely transported, fending off
attacks from the ‘outcasts’ when needs be.

In practice, this
means blasting away at the outcasts then using the collected energy to
build whatever resources Emmett needs. StarHawk is played out in
third-person, but it’s not a cover-based shooter in the mould of Gears
of War. Instead, it’s all about hitting objectives hard and fast, then
building whatever you need to defend or assault the next one. During the
course of the campaign, most facilities you can think of will be
deployed to assist, ranging from simple defensive turrets to sniper
watchtowers and supply bunkers, each giving Emmett access to more
weapons. 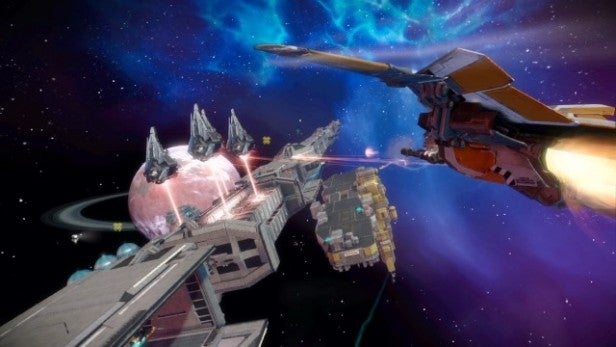 Take to the skies
More importantly, garages,
corrals and hangers give Emmett and his allies access to vehicles,
ranging from speeder bikes to warthog-style jeeps and – most excitingly –
the Hawks. Basically mechs that transform into fighter jets, the Hawks
enable Emmett to take the fight into the air, or even into space.

There’s
a lot going on here, but the surprise is how well it all fits together.
The building interface is instantly accessible and very easy to use,
and whether you’re on foot, on wheels or in flight the movement controls
are intuitive and responsive, with excellent handling and a versatile
set of weapons.

The levels also have an interesting structure.
You’re not starting off at one point in a level and working your way
through to the end, but moving between objectives across open maps,
establishing a beachhead, moving out to attack key objectives, then
defending them from waves of outcast attacks. The single-player game has
enough sense to throw in checkpoints and give you room to breathe and
prepare for the next assault, and the game scales up nicely to give you
new equipment and new enemies, so that there’s always something new to
get to grips with.

Still, were it simply a single-player game StarHawk would be a classic
seven-out-of-tenner. With its cel-shaded, comic-book style graphics it
looks decent enough, but hardly amazing, the art and design feels a bit
generic, and once you get the hang of the general mission structure the
action can grow a tad repetitive.

Enemy AI is reasonable but hardly that
intelligent, and once you’ve seen one dusty planet or industrial
orbiting station, you’ve pretty much seen them all. It’s an entertaining
shooter with a great tactical twist, but not the sort of thing you’d
excitedly point to friends and demand that they play. 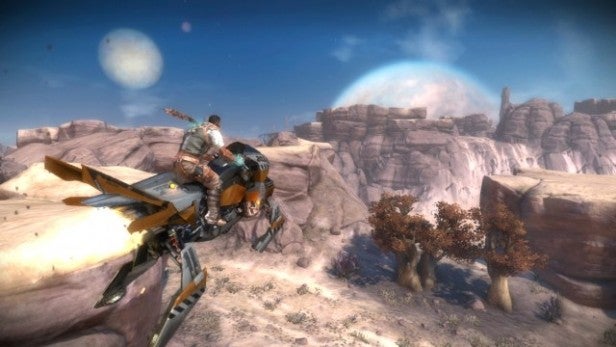 Building on the Battlefield
However,
just like WarHawk, StarHawk is fundamentally a multiplayer game, albeit
one with one of the most engaging single-player modes in any
multiplayer-focused game. The campaign is really a tutorial, and it’s
once you take the action online that StarHawk starts to look like
something a little more special.

With up to sixteen players on each
side and large maps to explore, plus all the jetbikes, tanks,
transforming mech jets and armed jeeps of the single player game,
StarHawk is the closest thing we have to a sci-fi Battlefield.

Encompassing
Capture the Flag, Team Deathmatch and an objective-seizing mode called
Zones, it doesn’t really push the boundaries in terms of game styles,
but the simple addition of base building makes it a different
experience. When it at its best, StarHawk can be a real spectacle, as
screaming Hawks dive in amidst beam-turret fire to take down defences so
that fast-moving guys on jetbikes or jeeps can race through to capture
the flag.

It’s also surprisingly well-balanced. Just when you think
Hawks and tanks threaten to dominate, you realise that one guy with a
rocket launcher can take these down with a little luck and skill, while
deploying sensible defences can also turn the tide. 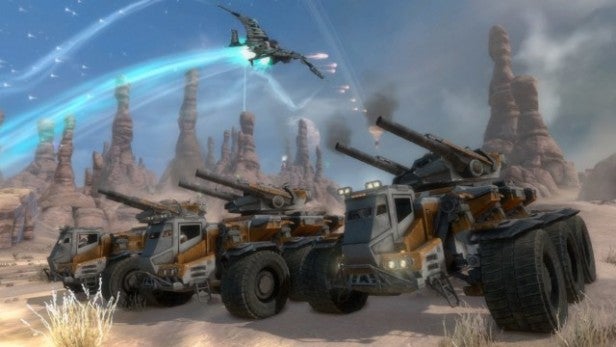 It’s a
game that encourages multiple play styles. Lone-wolf players will take
to the Hawks or find sniping positions, but the addition of base
building makes a defensive role just as interesting and valuable. In
practice, though everyone can build providing there is rift energy in
the central pool, not everyone does. Guys on jetbikes have limited
offensive capabilities, but can make quick raids on enemy positions, and
the maps encourage a range of different approaches. StarHawk is tight
where it needs to be, but flexible enough to fit your preferences.

Irritations
Of
course, even Battlefield isn’t great every game, and the same goes for
StarHawk. Camping snipers can be a nuisance, though they’re easy
pickings for a talented Hawk jockey, and you’ll occasionally find your
team-mates wasting resources unnecessarily, or doing the classic
request-a-tank-then-drive-off-without-any-passengers thing.

There are
Capture the Flag matches where everyone gets so enmeshed in assault and
defence that they actually forget about the flags, and tanks and Hawks
camping on the spawn ground can also be a menace. For every problem,
though, there’s nearly always a solution. For a start, players respawn
in a pod hurtling towards the planet surface, and if you’re smart about
it you can actually steer the pod so that it hits the camping tank and
takes out all inside it – revenge can be a wonderful thing. 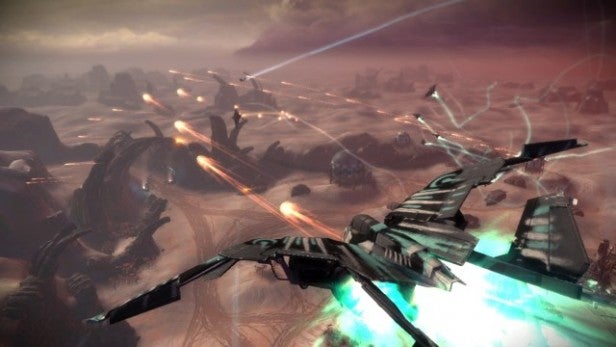 Co-op Play
If
you tire of the competitive action, there are also co-op modes
available, one being a co-op take on the campaign, the other being a
Horde-style mode where players work together to defeat waves of
Outcasts. The base building mechanics are perfect for this kind of
thing, so it’s no surprise that it works extremely well.

StarHawk
even makes it very, very easy to get into games, or even switch from
one game to another with a control panel and browser that are never more
than a couple of button presses away. It might all seem very simple,
but a lot of thought has clearly gone into nearly every aspect of the
game. 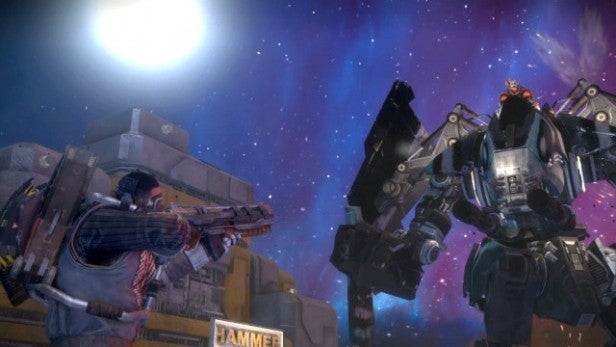 This doesn’t make StarHawk an essential PS3 shooter. There
will be plenty of players who might give it a go, dislike the new
dynamics, and return to Modern Warfare 3, Battlefield 3, Killzone 3 or
whatever else floats their boat. But if it works for you, then you’ll
love it. It might only develop a niche fanbase, but StarHawk is the kind
of game that gets a loyal one. If you’re looking for a mostly online
shooter with a difference, then that fanbase might just include you.

Verdict
While
StarHawk isn’t a AAA shooter in the class of Resistance 3 or Killzone
3, it’s a brave and interesting effort that makes a better job of
integrating RTS mechanics than similar games have in the past. The
single-player campaign is short and slightly repetitive and the art
style uninspired, but when it comes to delivering great multiplayer
action on a sci-fi battlefield, StarHawk comes into its own.