When Disney acquired LucasFilm – and the Star Wars license with it – fans of the force the world over crossed their fingers that Mickey Mouse and his kind would be able to lift an IP long run into the ground by its creator to the heights it enjoyed before the majority of them were even born.

Of course, alongside handing responsibility for the first new film over to J.J Abrams, Disney also has control over Star Wars’ hand in the games scene – a burden that’s arguably even harder than its run at the cinema, given many of the series’ high points during the last couple of decades have been not at the movies, but rather on games consoles. It’s fair to say, however, such creativity has not always made its way to Star Wars’ assorted appearances on mobile, and Kabam’s Star Wars Uprising makes little effort at upsetting that particular apple cart.

What Star Wars Uprising is, however, is a prime example of a free-to-play model that social gaming giant Kabam mastered a long time ago: an intentionally light and in no way intimidating action RPG that revolves around keeping you engaged with short sharp missions in the hope you’ll part with your cash along the way. Indeed, though play opens with all the kinds of Star Wars paraphernalia you’d expect – including a barrage of descriptive text floating through space – its links to the films, new or old, feel somewhat token, almost gestures to please the Disney executives visiting to check on Uprising’s progress rather than any meaningful extension of the film series. 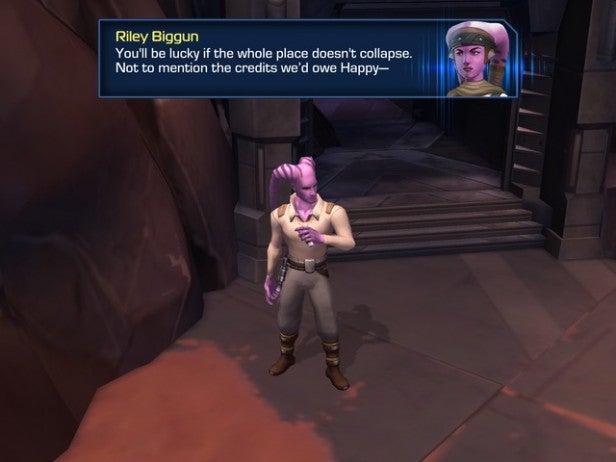 Playing a guy or girl attached to a species of your choice, it’s your job to upset the remaining entrails of the empire, with Uprising set in the immediate aftermath of Return of the Jedi. Though the Death Star has been pulverised and the Sith banished to history (for the time being, at least), parts of the galaxy are still under its spell, and Uprising charges you with freeing the few worlds still gripped by the empire from its malevolent force. To do this, play tasks you with taking out enemies in succinct 3D levels viewed from above, picking up items as you go and attempting to move what is a rather tame storyline forward, line by line.

At your disposal are an intentionally limited batch of moves. Tapping on the screen will send you running in that particular direction, while it’s also possible to shoot enemies and items alike by touching their location. Tapping twice in quick succession triggers a barrel roll, though time is needed in between each move to recharge. As play progresses, it’s possible – and, indeed, advisable – to upgrade both your weapons and your defences, with each level handing over treasure chests and other trinkets that unlock such bonuses automatically.

That is, however, the extent to which customisation plays a role. Though you can mix up your battle techniques by throwing in a special move every now and again (a tactic best saved for boss encounters), play quickly falls into a set formula of rapidly tapping on anything that moves, skimming through the associated script and moving onto the next mission. Or, indeed, repeating the same mission more than a couple of times in order to grind your way through this free-to-play release. 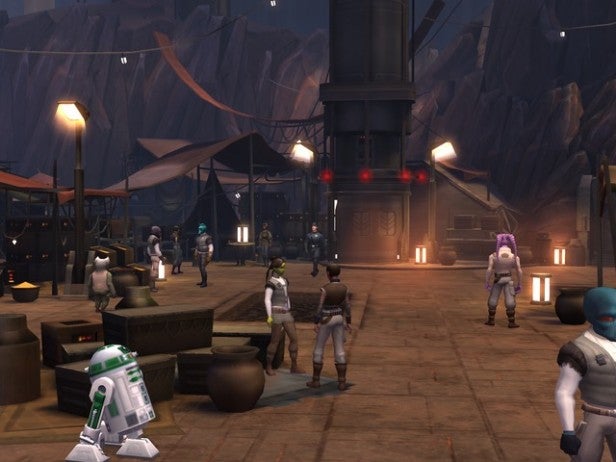 Not that you’ll really be able to tell. Though the level architecture shifts as you progress, the stages pull off much the same tricks time after time, with tap-tap-tapping your way through each encounter soon becoming a yawn inducing bore. Throw in the fact that doing so often triggers an unwanted barrel roll right into the arms of the opposition, and you have a combat system that’s as frustrating as it is sterile.

That is, in itself, a perfect summation of Star Wars Uprising in a nutshell. There’s nothing essentially wrong with what Kabam has put together here, but at the same time, there’s nothing remotely original or inspiring about it either. It is simply a license dropped into a well established model with only token reference made to the mammoth IP Kabam has taken on. It’s not evil, it’s not even cynical, and there are sure as hell scores of games that manipulate the free-to-play model in far worse ways than this. Star Wars Uprising’s problems, in fact, are nothing to do with how it’s monetised, but rather than it is saddled with a complete lack of creativity that makes this a complete non-event from start to finish.

Verdict
Inoffensive but utterly uncreative at the same time, Star Wars Uprising has a good thrash at dropping LucasFilm’s IP into a manageable free-to-play RPG, but ultimately it isn’t risky enough in terms of design or interesting enough in terms of plot to be anything other than an also-ran.