This is great for lone-wolf players, but it’s also a double-edged sword. The Old Republic is heavily-instanced, meaning areas are broken off for single-players or established groups to share without the community at large getting involved, and at times The Old Republic can be a slightly lonely MMO. It’s not always easy to find players to group with when you need to, and you will need to. Why? Because the game also features two or more player ‘heroic’ missions which can’t easily be managed on your tod, and because grouping up is also the only way to enjoy the game’s ‘flashpoints’. These are self-contained, story-led group missions with a series of stages and a final boss. You could theoretically go through the game without doing these, and in fact we did for quite some time, but without the rewards and experience earned through completing the group missions it can get difficult to get through solo missions later on. 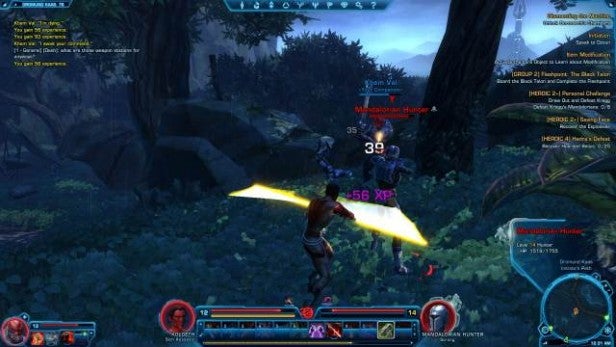 Luckily, the payoff makes it all worthwhile. This is a vast game, with enough content to fill two single-player RPGs even if you only count the Empire and Republic tales and don’t cover the individual classes. The game has a solid PvP element – though not one we’ve had much time to explore – and even simplified space-combat as you move on. Even after many hours of play we have yet to do more than scratch the surface of the crafting systems, crews and crew management and the skills tree. Given the wealth of content on offer, the £8.99 monthly subscription doesn’t seem ludicrously high, even in an age of Free 2 Play.

That doesn’t mean Bioware’s work is done. There are still areas that lack any serious interest and also too many sections of endless plodding back towards a quest-giver while eliminating foes you dispatched half-an-hour ago. There are some fast travel options, but these are either too limited or possessed of their own weird kind of tedium. It also must be said that The Old Republic’s worlds don’t quite have that sense of exploration and discovery that characterised vintage WoW or even the best chunks of Guild Wars. From what we’ve seen the galaxy has pockets of brilliance, but not the coherence and depth in detail of Blizzard’s Azetoth. 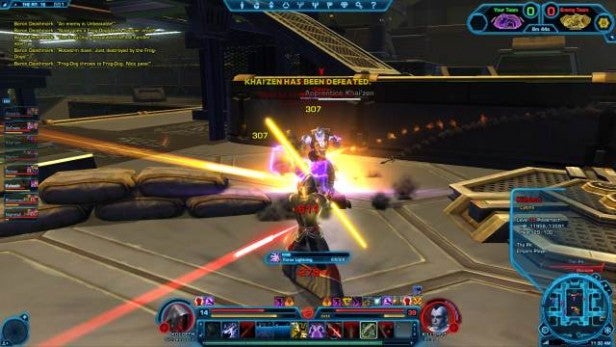 Still, for any complaints let’s not lose sight of what’s really important: this is an impressive start to a new MMO and as compulsive an example of the genre as we’ve yet encountered. Only time will tell how the game will pan out and how rewarding later content will be. After all, it’s the support that Blizzard has given WoW since its inception that has kept it running so strong for so long. For the moment, what we have is a Star Wars MMO that might do little to revolutionise the genre, but that has plenty to please fans of Star Wars, Bioware and WoW. For most of us, that’s more than enough.

Verdict
The Old Republic is not the MMO to sign up for if you’re looking for revolutionary gameplay or a new approach to the genre. There are still irritations and sections that drag, and at times group play feels like a secondary priority. Yet it’s hard to ignore the appeal of the Star Wars atmosphere, high production values and Bioware’s storytelling expertise, and the gameplay is as rich and compulsive as any MMO out there. Of all World of Warcraft’s would-be rivals, the force is strongest in this one.