Let’s get this straight right now. If you’re not a Star Wars fan, don’t buy The Force Unleashed. This is not the game you’re looking for. Move along. If you buy it because you sort of like Star Wars and you fancy a solid action game, you’re only going to end up bitching about the shoddy AI and uninspired level design or get frustrated with some of the shockingly irritating action sequences on offer. If, however, you are a Star Wars fan then you’ll find yourself glossing over some of these points for one simple reason: this isn’t just the best Star Wars action game since Jedi Knight II, it’s a great Star Wars experience, full stop. 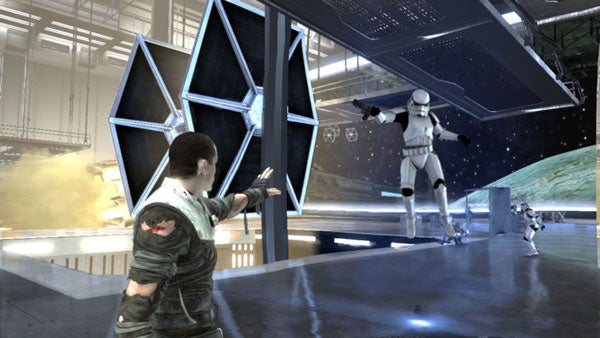 We covered a lot of the basics in the preview, but to sum up, you play Darth Vader’s secret apprentice as he carries on his master’s evil work of mopping up the remnants of the Jedi following the events of Revenge of the Sith. The apprentice, it appears, is unusually strong in the ways of the force, and this is what brings meaning to the title. We’ve seen games where force powers are a part of the action, but here they’re the central focus. Using different combinations of the face buttons, bumpers and triggers on the 360 pad, the apprentice can grip and hurl objects or people around, blast barriers apart with huge waves of force energy, electrocute foes with force lightning and generally pull off the sort of high-leaping, laser-deflecting, lightsabre-throwing antics we saw in the prequel movies.


The Force Unleashed is all about taking these powers, learning how to use them then letting them rip. Because Lucasarts has chosen to cater down for the widest possible audience a little hack and slash action with your lightsabre still goes a long way, but the real excitement comes when you play smarter, exploring how your powers can be wielded to wreck the people and environment around you.

And the game positively encourages you to do exactly that. As Vader’s secret apprentice you’re a kind of loose cannon; your one responsibility is to your master, and when he says ‘leave no witnesses’ that makes everyone and everything fair game. Whether pre-alliance rebel forces, scavenging Rodians and Jawas or stormtroopers and Imperials of all shapes and sizes, Darth has basically handed you a license to slaughter and destroy. Vader’s no bean counter. If his plans require the wrecking of an imperial shipyard or the elimination of multiple tie fighters, so be it. Every environment becomes your plaything.

Much has been made of the technologies that make this possible, and in practice they provide 75 per cent of a convincing world. Digital Molecular Matter ensures that no two objects bend, break or shatter in the same way. Hurl rocks through trees or a container through a space station window and the materials react with an incredible realism.


The Euphoria behavioural simulation engine makes it so that the population move in a believable way, wriggling in your force grip or grabbing onto a poor comrade as you levitate the hapless duo high into the air. You’ll even see stormtroopers tripping over the scenery from time to time (maybe it’s a defect in the helmets – this would also explain their notoriously woeful marksmanship).


Finally, the Havok physics engine does here what it has in other games before: everything moves with an authentic sense of mass and velocity, making tossing your toys around a real pleasure. 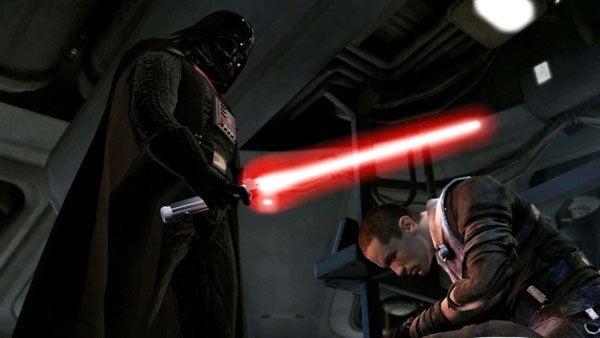 When this all comes together it’s superb. Your powers aren’t at full potential at first, but by completing objectives and collecting special power-ups you can level up and enhance your powers, adding new combat combos that mix lightsabre attacks and force powers, improving the range and effect of your force push or force grip abilities, or giving you more force energy or health to work with.


The more you harness the dark side, the more fun you’ll have, hurling stormtroopers off precipices, laying waste to whole alien populations and laying the smackdown on scout walkers, tie fighters, several varieties of heavy stormtrooper and just about anything and everything that gets in the way. 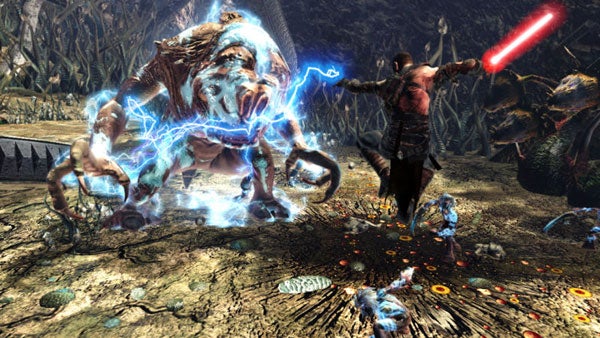 Unfortunately, there are plenty of times when it all doesn’t come together, and this is what will absolutely spoil the game for some people. The first problem comes down to what I mentioned earlier: that the technology only provides 75 per cent of a convincing game world. The missing 25 per cent is the AI. Goodness knows what has happened to the Imperial forces since the clone wars, but these guys are blundering dolts, incapable of working together or even, in some cases, turning in your direction until attacked.


Rebels and scavengers are no better, and any sense of humanity (or Jawality) imbued by the Euphoria engine is comprehensively scuppered by this failing. If you want gritty battles against believable opponents The Force Unleashed just doesn’t deliver. Instead, it plays a numbers game, ramping up the quantity and toughness of your opponents in order to build a bigger challenge.

To make things worse, the level design is often lacklustre. Sure, we get the odd breathtaking scene or set-piece, but in a lot of ways The Force Unleashed suffers from the same problem as EA’s Army of Two: the core mechanics are all in place for a great time, but the game seems content to trot out variations on the same, slightly bland situations over and over and over again. In this case, the fun of using the Force just about compensates, but when you compare The Force Unleashed to a really great action game, it lacks the sort of tension, pace and flow you would hope for. 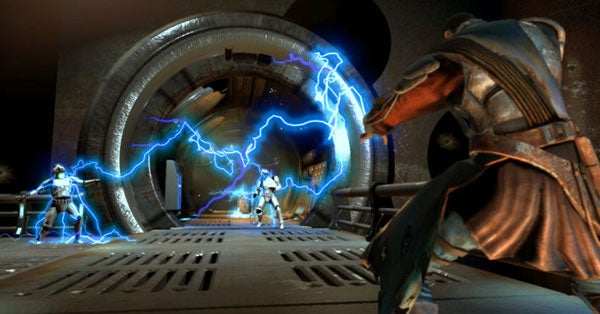 Next we come to my recurrent bête noir: quicktime event sequences. The Force Unleashed suffers from the all too common delusion that spectacular battles can only climax in an irritating flurry of ‘Simon Says’ button pressing to trigger the final death blow. Mercifully, it does make them easy, barring one infuriating boss battle where you’re expected to follow some impressively hard-to-follow prompts in order to drag a Star Destroyer out of orbit.


This is one of the worst sections of a game I’ve played this year, and nearly lost The Force Unleashed a point or two on its own. It should never have survived testing in its current form, and I can say the same about numerous other defects, including isolated segments where the mix of enemies and lack of tactical options creates a ludicrous difficulty spike. And could I also mention that some of the checkpointing is unforgivable, sending you back through several tricky fights before a particularly vicious battle. Grrr. 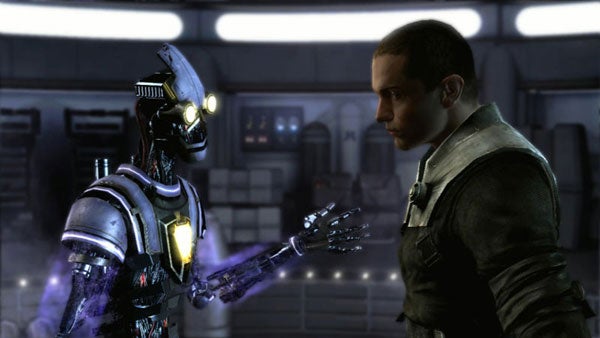 At this point you might be looking at the score at the top of the page and wondering whether I’ve gone bananas. Well, I might have done, but not entirely. Shockingly, I’m more than willing to forgive these hideous, glaring flaws because The Force Unleashed works so well on the cinematic and narrative levels. It’s not just a good-looking game on a technical level, but one where every aspect of the visual design fits perfectly within the established Star Wars universe.


The acting, particularly Sam Witwer’s motion captured performance as the apprentice, is uniformly excellent, and the score works brilliantly, pulling out strands and themes from the prequel and classic trilogies and fitting them perfectly to the new storyline. When you play a Star Wars game you want the authentic Star Wars atmosphere; you want to forget about the outside world and get sucked into a galaxy far, far away. X-Wing and Tie Fighter had it. Knights of the Old Republic had it. Jedi Knight II had it too. The Force Unleashed has it in spades.

In fact, it goes one better than any of the above in that the events in the game tie directly into the events in the prequel and classic film trilogies, and not in some peripheral way either. Your tale intersects with that of key characters in the saga and – in the end – the apprentice’s choices have a meaning and an impact that actually add something to the Star Wars narrative as a whole. It’s clear that while not everybody working on this project was playing their A game, the guys working on the story, the script and cinematics were. Arguably, this is a more satisfying slice of Star Wars than any one of the prequel movies, and certainly a more essential piece of the saga than this summer’s Clone Wars CGI film. 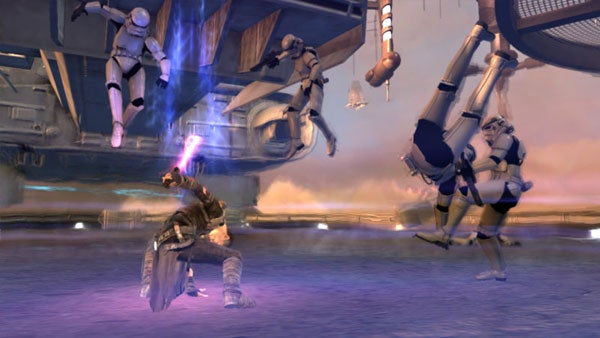 This elevates the game into a must buy for Star Wars fans; hence the 8 rating (though you’ll notice I’ve not slapped on a Recommended). I’m pretty confident that anyone who loves Star Wars will find enough to love in this game to more than make up for its many shortcomings. Obviously, for those of you who are not fans that means nothing, but I’m sure you can find something else to spend your time and money on. At the very least, I hope The Force Unleashed marks a turning point for Lucasarts in the way it treats the franchise – if it could just combine the storytelling here with a game completely worthy of it, that would really be something for Star Wars fans to go crazy about. 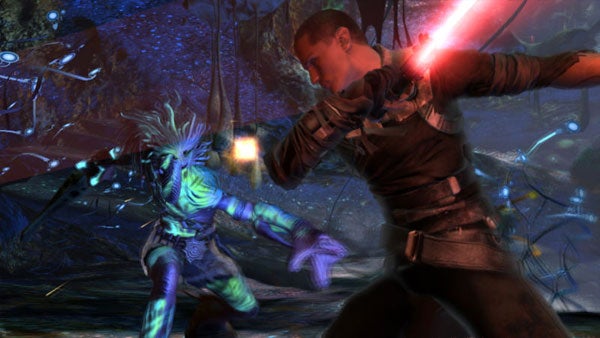 
The AI is poor, the gameplay flawed and the level design mediocre, yet this is still a great Star Wars adventure, elevated by superb storytelling and the most impressive use of the Force in a video game to date.