What are the Star Wars Battle Drones?

Any Star Wars fan has probably imagined piloting an X-Wing during the Death Star trench run, or the Millennium Falcon during the infamous Kessel Run – to see if it could indeed complete it in less than 12 parsecs. Until now, that probably meant a couple of inanimate Star Wars figurines and plenty of imagination.

With Propel’s Star Wars Battle Drones, we finally get a chance to pilot some of the Star Wars universe’s most famous vehicles. These new drones are available as the 74-Z Speeder Bike, T-65 X-Wing Starfighter and TIE Advance X1. You’ll have to wait until 2017 before the Millennium Falcon model becomes available, however. Sorry, Han fans.

Where Propel could have made an easy cash-grab licensed drone, the attention to detail and fan service contained within the box are guaranteed to delight Star Wars fans. The only sticking point is it’s going to get seriously expensive if you want a fleet of battling drones to make use of the headline airborne dogfighting feature.

I don’t normally comment on packaging, but I’ll make an exception for the Star Wars Battle Drones. You see, the whole experience begins when you unbox your shiny new drone.

The packaging design is first-class. There’s a “wax seal” you need to remove before you can lift the top off, although the wax seal is actually just stuck down. With this out of the way, you’re free to lift the lid off the box.

I can’t remember the last time I had an unboxing experience quite like this, but as soon as the box is lifted off, you’ll see your drone displayed in a transparent box, all lit up with the Star Wars theme playing through a built-in speaker. I knew this was going to happen because I went to the launch event, but even then it was a positively delightful experience.

When you replace the box cover then remove it again, a different tune will play that’s relevant to your drone alongside some dialogue from the relevant movie. It’s seriously cool.

The box acts as a display case for when you’re not flying your drone, so be sure to keep hold of it. You can recharge the speaker and lights using the same charger that’s used for the drone’s battery.

I was sent the Speeder Bike model for review, and in truth it would probably be my least favourite against the TIE fighter and X-Wing options currently available. Even then, the attention to detail is excellent.

Each drone and model is hand-painted. Scuff marks are painted into the Speeder Bike’s frame, which also means that when you do inevitably crash, any new scuffs and marks add to its detailing. 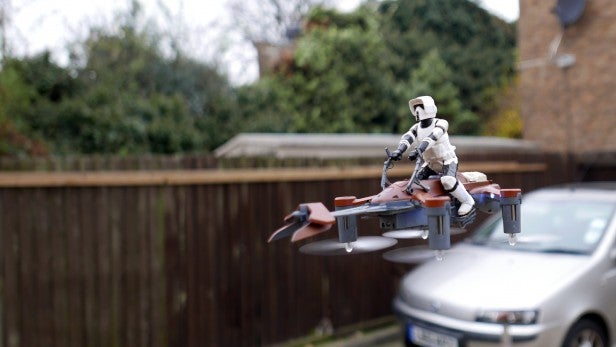 A spare Stormtrooper model and handlebars are included in a box of accessories, which also includes three sets of propellers. The propellers are labelled A and B, and it’s important you follow the instruction manual when attaching the blades. Put them in the wrong way and your drone won’t take off.

The drone uses Propel’s reverse-propulsion system, so the propellers sit beneath the drone. When in flight, the translucent blades are almost invisible, helping to create the illusion that the Speeder Bike is actually flying. That is, unless you attach the supplied safety cage. 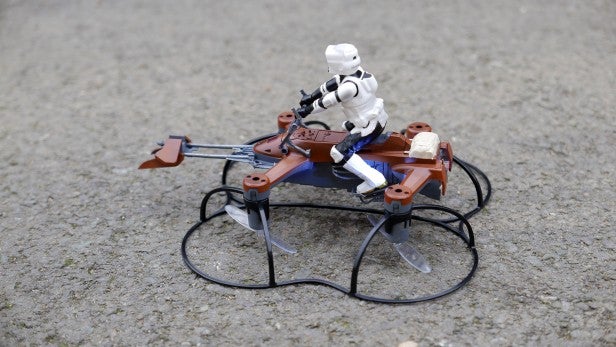 This is designed for novice pilots and helps to protect the propeller and, to some degree, the drone model during a crash. The problem with the Speeder Bike in particular is that the front extends beyond the safety cage, so a head-on collision will see it take a decent hit.

You’ll need to insert the removable battery before you can embark on your maiden flight, which in the case of the Speeder Bike is in fact the seat of the bike. It’s a nice touch. A decorative seat is included that doesn’t contain a battery used for when displaying your drone in its case. This comes pre-installed and is quite tricky to remove.

In fact, the battery removal process is one of the frustrating elements of the Speeder Bike model, as the clip that keeps it firmly attached is difficult to dislodge. You also need to move the Stormtrooper out of the way. There’s no off switch, either, so you have to remove the battery – otherwise, the drone will stay illuminated and run its battery down. 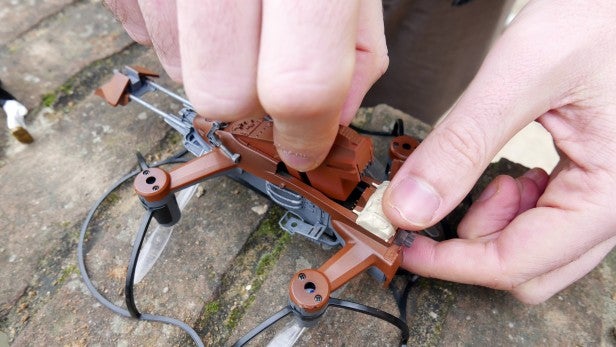 Two spare batteries are included in the box alongside a charging dock that uses a USB to DC jack cable. A USB wall adapter is included, too. Charging a battery takes about 40 minutes in total, but 30 minutes will take the battery to around 90%. A full charge will get you around 6-8 minutes of flight time.

As soon as you remove the battery cover, sound effects and dialogue will play through the speaker from different characters. Think along the lines of Darth Vader beckoning you to the dark side through inserting the correct batteries. It’s another novel little touch that brings another smile. 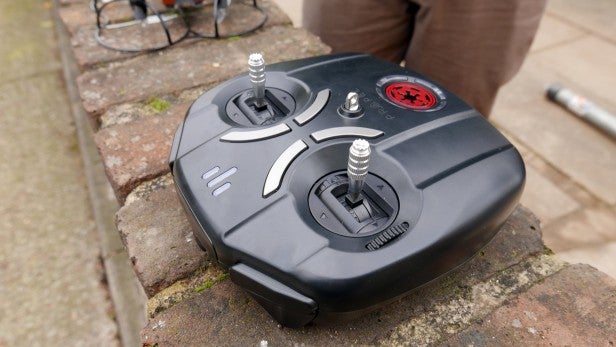 During flight, the remote control can play sound effects and music from the Star Wars films. There’s even a dedicated listening mode where you can listen to the soundtrack through headphones if you want.

There’s an integrated smartphone holder that can be used for a yet to be released companion app. From what I was told, Propel is releasing an app that will work with the controller and provide a virtual training environment so you can practice drone flying.

Once you’re all set up, there’s an automated take-off and landing function. Hit the corresponding button on the remote control and the drone takes off vertically. Hit the button again during flight and it descends. All standard procedure.

There’s a T-Mode option, which limits the speed and improves the maneuverability, as well as introducing invisible barriers so you can’t fly too low to the ground or too high up. These are useful for when you’re first starting out and getting accustomed to your new gadget.

Otherwise, there are three speed options and the drone tops out at a rather nippy 35mph if you’re feeling brave. Handling of the drone takes some practice, not helped by the fact that it tends to drift in one direction if you take your hands off the sticks – even when flying indoors. 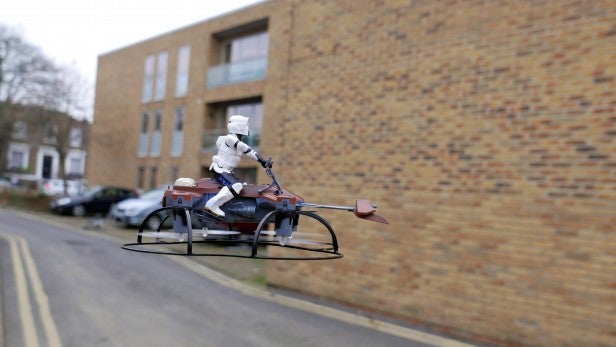 I contacted Propel’s support to see if this was a technical issue because, admittedly more expensive, drones are capable of hovering in place without any user input. Supposedly, this is normal. It does mean that you do feel like you’re slightly fighting against the controls. But in fairness, after a half hour of flying, I definitely started feeling braver behind the controls.

Using the controller’s shoulder buttons you can do barrel rolls, which are great fun, and the user manual includes some more advanced maneuvers you can use during a dogfight. It’s like Nintendo’s Star Fox video game brought to life. 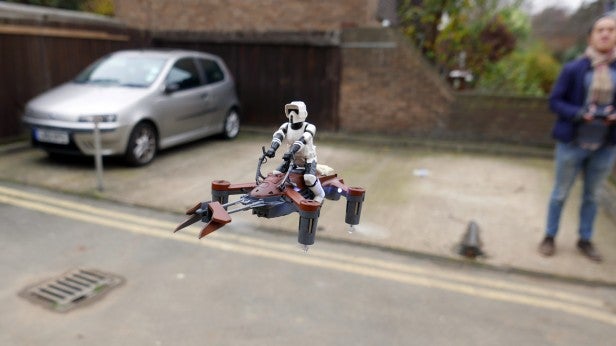 Unfortunately, I couldn’t test the battling element myself due to having only one drone, but I did have it demonstrated to me at an event. Essentially, you can have up to 24 drones flying and fighting. Infrared receivers on each drone can detect when they’re shot; you get three lives, which are shown on your remote control. Take three hits and your drone takes a semi-controlled crash back to the ground.

When starting out, you should probably use the safety cage.

This all sounds great fun in principle, although you’re going to need a lot of space – and confidence – to have more than half a dozen in the air at once. That, and also very deep pockets to be able to afford multiple drones. I also wish there was a camera onboard, even a basic one such as with Propel’s Batwing Drone HD. That way, you could capture footage of your dogfights.

Should I buy the Star Wars Battle Drones? 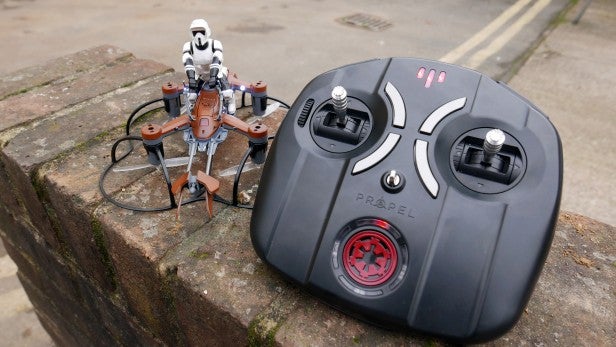 If you’re a Star Wars fan then absolutely. While the drones certainly don’t come cheap, there’s so much here that will appeal to Star Wars fans. The presentation really is top-notch all round.

The only sticking point is the cost: it’s going to get seriously expensive if you really do want to make use of the battling element. However, even when flying solo, I had an immeasurable amount of fun flying the Speeder Bike and finally got to fulfill a childhood ambition.

My main concern is how many of these will be bought only to be kept as collector’s items; each one is numbered. Those who do this will be missing out on some serious fun.