Did you know there’s a new Star Wars film out? Seriously, you might not have heard anything about it, but apparently it’s been in development for a few years now and it’s being directed by some guy who was behind some TV show or other where a load of people got stranded on an island. Apparently, it was quite popular. Who knew, eh? You’d have thought they’d have whipped up some kind of promotional buzz for it, right?

For all the clarity there has been in Disney’s well-coordinated hype campaign for Star Wars: The Force Awakens – we imagine you’d need to be an Imperial Japanese soldier abandoned on an island in South East Asia still fighting World War II not to have heard about the return of the dark side – this mobile tie-in is comparatively cluttered and without any real vision to speak of. Indeed, you can sum up Star Wars: Galaxy of Heroes in just one sentence: A simplified but ultimately confusing free-to-play take on a turn-based RPG.

When it comes to the battles themselves, Star Wars: Galaxy of Heroes isn’t afraid to fall back on what are now well established norms on mobile. With your band of heroes on the left side of the screen and your foe on the right, the game cycles through all of the characters, one by one, giving each a chance to take a pop at the troops opposite. As you might expect, each combatant – from clone troopers through to the Jedi themselves – have their own strengths and weaknesses, with a standard moves coupled with a special moves that have to be recharged in between each use. 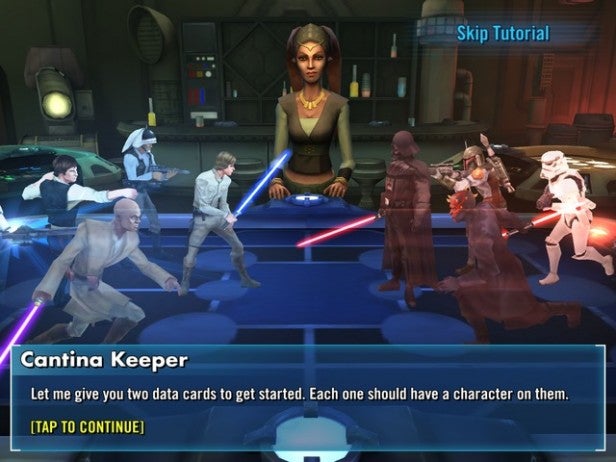 As such, coming out on top in these battles is a case of knowing which enemy to target first (if one of your foe keeps constantly healing your rivals, it may be best to take them out as quickly as possible) and which of your own band needs protecting. Wookies, for example, can perform a war cry that attracts attention and locks all of your enemy’s fire on them, saving the rest of your troop from attack. It can be wise to sacrifice one of your characters in order to save the rest, though EA’s take on free-to-play means that some battles feel intentionally harder than others.


The idea is that you use the rewards handed out to you in victory – and, presumably, some of your own cold, hard cash – to upgrade your band of battlers, and that’s certainly possible within Star Wars: Galaxy of Heroes, presuming you work out how to navigate through its confusing mess of menu systems. Like an arcade with a bit too much electricity pumping through it, there are so many flashing lights and buttons calling for your attention within Star Wars: Galaxy of Heroes, that knowing what you need to do and why outside of the battles themselves is especially difficult. Both the upgrade process (there are multiple systems measuring your fighter’s abilities, not including his or her gear) and the methods behind unlocking new characters are so diverse that it’s hard to know just what is going on much of the time: for a game that puts character management supposedly at the heart of its proposition, it’s especially hard to manage anything at all when stumbling around in the mire of this set up.

This is a fault that is by no means limited to Galaxy of Heroes – EA’s take on free-to-play has, in the past, been accused of being both too greedy and more recently too generous, but what it always manages to be is overly complex in its delivery. It’s impossible to know whether this is simply bad UI on EA’s part, or whether the publisher is actively trying to confuse players in order to coax them into spending money, flooding them with free upgrades and trinkets early on – almost at every single stage – so they get hooked on them and can’t play without them. 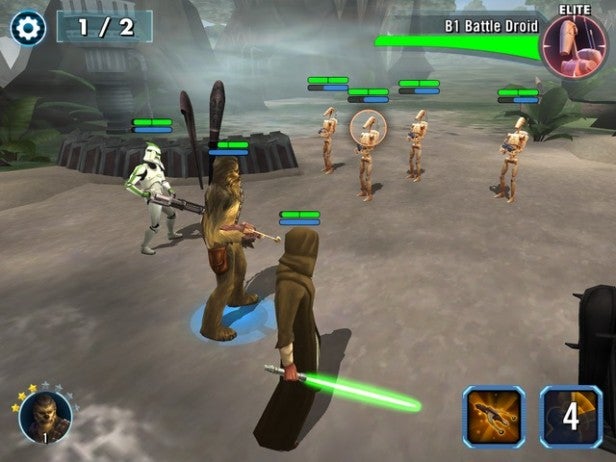 Bigger than this, however, is the fact that the gameplay itself is, perversely, far too simple. There’s something especially comical about seeing Stormtroopers and Sith alike simply standing motionless, waiting for you to take them out, especially when compared to the CGI orgasm that was splashed all over the most recent movies. What’s more, there’s nothing concrete linking the battles together beyond any vague feelings of loyalty to the Star Wars brand. If you want a more consummate introduction to the world of turn-based RPG battlers, then the App Store is full of them. What it arguably remains devoid of, however, is a decent Star Wars tie-in, and EA’s Galaxy of Heroes regrettably isn’t the game to change that.

Verdict
Playing out more like a fairly shallow, kit-based RPG battler with no real link to the Star Wars franchise, Galaxy of Heroes’ intentionally simple battle system is undermined by an over complex take on free-to-play that bamboozles the player with flashing lights at every turn.