What is the SpotCam Sense?

The SpotCam Sense is one of many home security cameras flooding the Amazon homepage.

It doesn’t do much to differentiate itself from competing products in the same price bracket, like the Y-Cam Evo or Nest Cam, when it comes to specifications and features.

But by getting most of the basics right the Sense earns its place as a reliable entry-level home monitoring solutions on the market, if you can put up with its lack of easily accessible local storage and poor microphone. 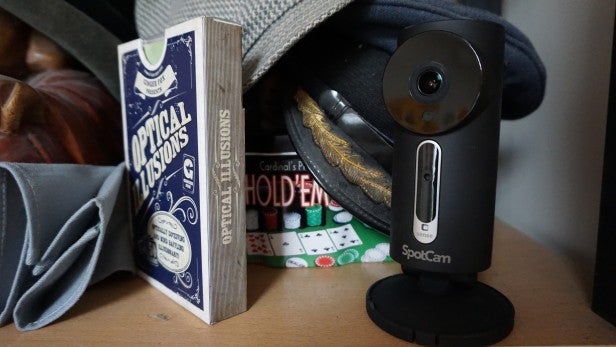 The Spotcam Sense isn’t the prettiest camera around. It looks like a squashed, slightly less alluring version of the Netatmo Welcome. Sitting at 15cm high, it’s also not the smallest home monitoring camera on the market. But the black version I tested was far from ostentatious and ticked most of the right boxes when it comes to functionality.

As a camera you can either free stand it on a desk or shelf, or attach the Sense to a wall using the provided screws. I was also able to attach it to the wall using double-sided tape due to the Sense’s light weight at just 168g, though Spotcam doesn’t actually recommend you do this.

The only limitation where you can place it is the slightly short power cable provided in the box, which only stretches out a couple of meters, This will be an issue for people who want to wall mount it in a high corner. Personally I’d have liked to see a battery-power option, but for the money it’s hard to quibble.

Once placed, the setup process is pretty much identical to all the cameras I’ve tested. All you have to do is download the app (iOS and Android support), connect the camera to your router and follow a series of on screen instructions to name and adjust the Sense’s settings to your liking. The entire process took me less than five minutes and was blissfully free of the connection issues I’ve experienced on other cameras like the Swann One Smart Home Control Kit, Y-Cam Evo and D-Link Smart Home Security Kit.

My only major issue with the SpotCam’s design is that it doesn’t feature a microSD slot for local recording. Instead it has a fairly small 500MB internal card that is only used for “disaster recovery”. The SD saves up to three hours of footage when the camera loses internet connectivity, which is a nice touch, but bizzarely you can’t instruct the camera to save locally. This coupled with the fact you can’t expand the amount of storage past three hours will be an annoyance for people who like to keep a proper log of what’s going on around their home when they’re away, or like having the added security of saving alert footage in two locations. 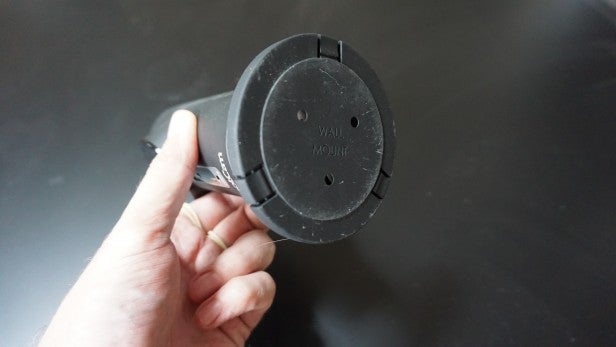 Fortunately this issue is partially curtailed by the SpotCam software’s cloud storage options. SpotCam’s offering 24-hours of free cloud storage. This isn’t unique to SpotCam, many leading providers offer 24 hours, although some only allow half that.

Those who wish to can also increase the amount of storage by upgrading to one of SpotCam’s paid for cloud packages, which are fairly competitive. These include options for three days to a month’s worth of cloud storage for between $3.95-$19.95 per month, which is about £3.50 to £16.

The SpotCam’s app features a similar user interface to Y-Cam’s, where the homepage features quick tiled shortcuts to every connected camera in your home. Within the shortcut is a small setting icon that lets you manually adjust things like motion alert sensitivity, recording resolution and also lets you schedule what times you’d like it to start detecting motion and recording.

Within the main camera feed you then have options to take photos, use the in-built to speak to people and download “events”, which are snapshot recordings when an alert is triggered. Events can be set to trigger for motion and sound, which is pretty par for the course on a camera in the Sense’s price bracket. 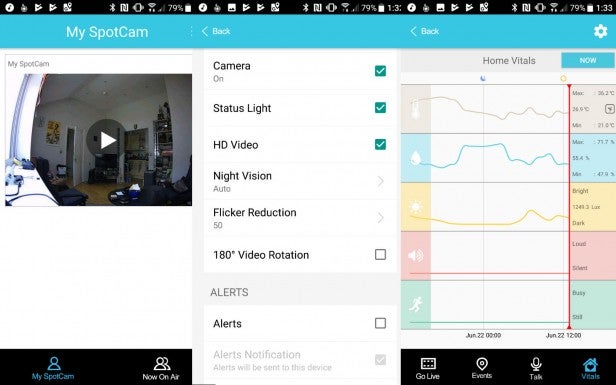 The detection feature proved reasonably reliable during testing and the SpotCam app was blissfully quick to connect to the live feed, even on 4G.

My only quibble with the Sense’s monitoring powers is that, despite showing the live feed in Full HD, captured footage is recorded in 720p. In regular light the saved 720p footage is more than good enough to identify specific people’s faces from two-three meters away, but any further than this it becomes difficult.

Footage captured in the dark is also too noisy to recognise specific faces, despite the camera’s night vision mode, though being fair this is a problem on most of the more budget-friendly cameras I test.

The built-in temperature sensor also proved useful. The sensor, combined with the Sense’s other hardware, powers the app’s Home Vitals section, which provides line graphs detailing the room’s temperature, light and motion levels throughout the day. This is very similar to Canary, which also allows you set up alerts for humidity, air quality and temperature.

The only downside to the SpotCam is it’s lack of out-of-the-box extra features and lacklustre microphone. I can forgive the lack of facial recognition features, such as the ones seen on the Netatmo Welcome, given the Sense’s price, but the absence of geofencing is a bit annoying, especially given most of its rivals support it.

Geofencing effectively means you can stop thinking about your camera; it’ll start creating alerts when you leave your phone (using your smartphone’s location) and stop when you return. The feature is a small touch that features on numerous rivals including Nest, Canary and Netgear Arlo, so it’s a pain not to have it here in such a competitive market.

The Sense’s IFTTT functionality fortunately helps curtail the issue, if you have the patience. IFTTT is an abbreviation of “If This Then That” and in my mind a prerequisite for any smart home system. It’s basically a fancy web service that lets you get apps to work together and create specific triggers, called ‘Recipes’, so if one thing happens another app will automatically react.

Once I logged into my IFTTT account and added the SpotCam app to it, I was able to set it up so the camera would automatically activate the moment Google Maps detected I had left my home using the GPS on my phone.

The microphone and speaker issues, however, can’t be so easily fixed. The mic and speaker in theory let you hear, as well as see, what’s going on in the live feed and talk to people or pets, but with real world use incoming audio sounds noisy and undefined. Even minor background noise sounds slightly distorted and chatting through the mic, my flatmate described my voice as “sounding like a death metal singers” during testing.

The effect may be great when you want to scare burglars, but will be less useful for people that want to use the SpotCam to check on their pets or small children. 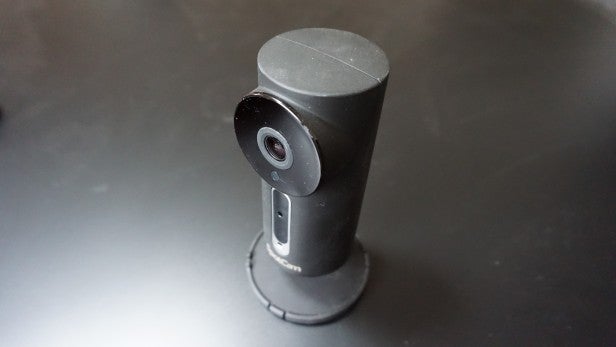 Should I buy the SpotCam Sense?

The SpotCam Sense isn’t a revolutionary product, but ticks most of the right boxes. Offering reliable live recording, reasonably accurate motion detection and IFTTT functionality the Sense is a solid choice for anyone on the market for a home monitoring camera.

The only serious downsides are its below-average microphone and lack of decent local storage options, which will be a sticking point for buyers’ specifically focused on home security.