If you’ve been looking forward to Spore, there will be points at which it threatens to underwhelm or disappoint. For all the obvious ambition of Will Wright’s new game, and all the hype that preceded it, there’s always been something so nebulous about the concept that you couldn’t help worrying that the game underneath might not be much cop.


Some of this fear dissipates pretty much as soon as the game kicks off, but even as you work your way through the game’s five phases, there will be moments where you wonder “is this it?” or conclude that, when it comes down to it, Spore might, just might, be a sequence of simplified action/strategy games glued together with a load of pseudo-scientific guff. 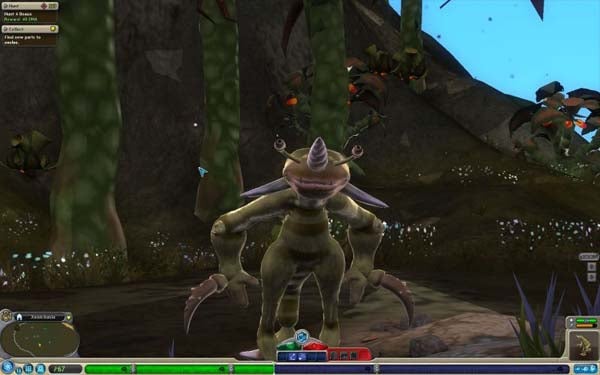 Don’t worry. It won’t last. Every time such thoughts have entered my head, Spore has defeated my cynicism with another display of intelligence or imagination. Spore can seem deceptively simple at times, but there’s always something interesting going on beneath the surface. It’s accessible, yet it’s also rich and epic. Be warned: a small proportion of hardcore gamers will give it a go and get bored with it fairly quickly before denouncing it as so much casual tosh. At the same time, it has the potential, like The Sims before it, to obsess the kind of people who don’t normally play games, and more than a few who do. 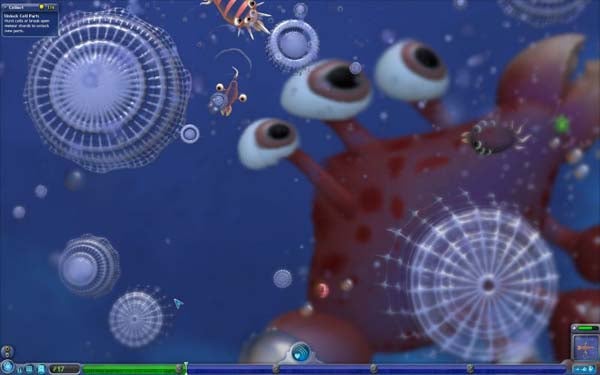 For those of you that don’t know, Spore tracks the evolution of a species from its beginnings as a cellular organism floating in the primal soup to its destiny as a technologically advanced race capable of interstellar exploration. The trick is that you effectively create the creature and mould it throughout its journey, guiding its evolution, building its culture, defining the style of its civilisation and its history. At the start your creature is just a blob with basic locomotion, a mouth and a pair of googly eyes. By the end, it will be building cities, handling the complexities of trade or war and flying spacecraft from solar system to solar system. That’s a pretty long trip, and Spore handles it with ease. 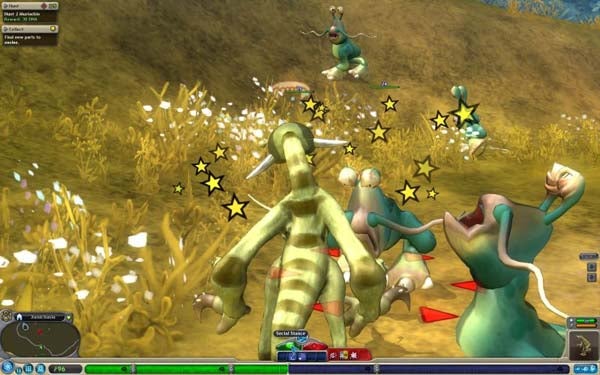 It does so by dividing it up into five phases, each taking on a different game style. The first, the Cell phase, is a fairly basic arcade game where you hunt for food (animal or vegetable according to preference) and avoid becoming it, the twist being that you can spend points earned by your munching on new bits of anatomy that will make you faster, tougher or a more effective hunter. The second phase, the Creature phase, picks up once you’ve wriggled onto dry land.


Oddly reminiscent of World of Warcraft, it has you searching for DNA carrying fossils which unlock new body upgrades while either befriending or eliminating rival creatures for food and points. As you progress you’ll find yourself tuning your creature for combat or diplomacy or a mixture of the two, with combat relying on a simple set of hotkey enabled moves (as in WoW) while impressing potential allies is a matter of following their moves (singing, dancing, charming, posing) with moves of your own.

Evolve your creature far enough and you’re onto the next stage, the Tribal stage. This is a simple RTS in which you either charm or destroy the other tribes through musical instruments or primitive weapons. This time you can use armour and other accoutrements to improve your chances, though you’ll also spend much of your time hunting for or gathering food.


By allying with or wiping out your rival tribes, you can also access their technology, helping your creature move to the next stage: Civilization. Here your species has conquered the planet, but also splintered into a range of different cultures.


Your mission is to unite them all through economic and religious power or just your regular military might. You have access to some simple city building options, and also to fleets of land, sea and air vehicles that will defend your soil or blast other cultures from theirs. The key is to – in a nod to Dune – control the ‘spice’ that constantly erupts from volcanoes on land and sea. 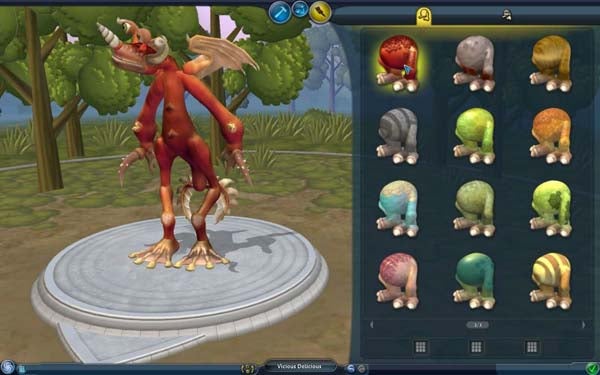 Unite all the world’s cities under your banner and you’re off to the stars, and the Space phase. As a would-be captain in your world’s interstellar navy it’s your duty to accept missions from your leaders, negotiate with alien cultures and basically mess around with other planets and their indigenous fauna. In a way, the Space phase is the summation of all Spore’s phases, allowing you to see what went before from a different, higher perspective. 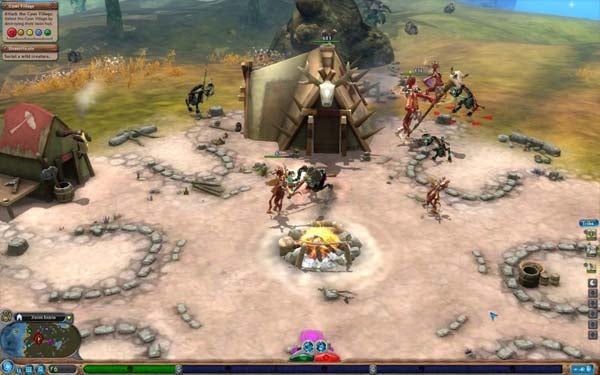 Taken on its own, no phase is actually that complex, but if, say, the Civilization phase is simple it’s an elegant simplicity. Sure, there’s only one land unit type, one naval unit type and one air unit type per civilization, while facilities are limited to fundamentals like factories, homes and entertainment centres, but that’s really all it needs to work and it makes the game far more accessible than a proper Civilization sim would have been.


The AI plays a decent game without being too tough on the easier levels, and at no point do you feel unfairly penalised for taking the peaceful option over the aggressive stance. If you want to breed herbivores who then go on to embrace religion or non-violent economic methods, that’s fine. If you want to create the most aggressive predator in town then turn them into the ultimate warrior race, that’s fine too. 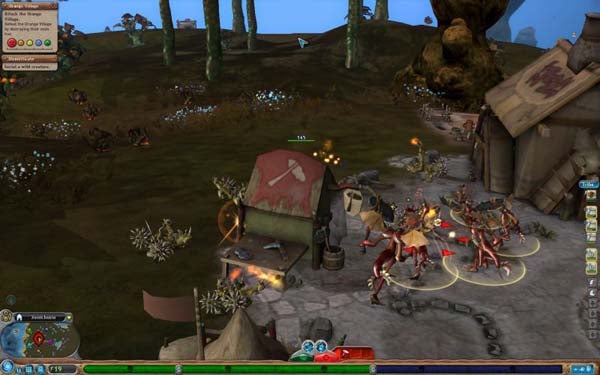 Even more than Black and White, Spore provides you with ways to play with different choices and objectives, and there’s always a strong feeling of causality and biologically anchored advancement – the choices you make in the Cell and Creature phases will be reflected in the Tribal and Civilization phases, partly because they define what special abilities you’ll be able to call upon in combat or diplomacy.


At the same time, your creature isn’t totally defined by what has gone before. If you start off with a creature that’s all claw and spiky tail, they don’t necessarily have to become an aggressive culture, though the pros and cons latent in their biology will certainly promote that kind of behaviour.

What really makes Spore special, however, is its potential for creativity. This is at its most obvious in the Creature phase where you’ll find yourself tweaking and recolouring your creature every time it breeds, but it works throughout the phases. In a way, the Cell and Creature phases remind me of Gran Turismo in terms of the cycle of reward and upgrade, not to mention in the way you’ll also take an aesthetic pride in how good (or nasty) your creature looks. When you get to the Tribal and Civilization phases, however, you’re still creating, whether it’s a suitable outfit, a national anthem, the tanks and planes that you’ll send in to invade or the towers, homes and factories that will shelter your citizens. 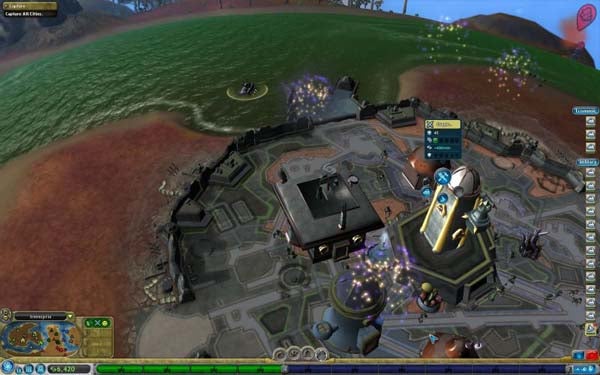 The tools with which you’ll do all this are easily the best I’ve ever seen within a game. It’s no exaggeration to say that anyone with a mental age of 10 or over could produce decent looking buildings or vehicles by dragging and dropping the simple primitives provided, and the program handles all the complex bits like the joints, intersections and skinning. It’s a joy to create a new city hall or retro rocket plane, and Maxis has hit a superb balance between giving you enough variables to create something distinctive and not giving you so many that you feel overwhelmed.


This is important, because another truly impressive thing about Spore is the way it handles player content. Spore was designed to get everybody – not just the hardcore few – creating and sharing. Unless you choose to play offline your content is automatically propagated to other Spore players, and their content will automatically sneak its way into your games. You don’t even have to think about it, and the result is that you’ll encounter an endless variety of creatures, cultures and objects, and you’ll never know from one game to the next what wonders you’ll encounter.


Behind the scenes there are some fairly sophisticated tools to subscribe to or ban content from specific users, plus options to comment on other people’s efforts or accept comments on yours from them. It’s content sharing, but it’s not in your face. It’s great. 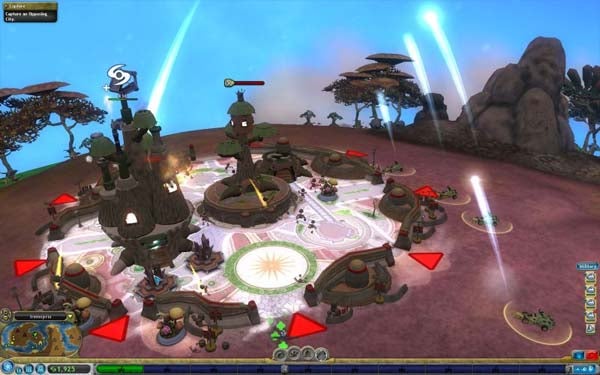 Of course, there are niggles, and each phase has its share. I may be corrected, but at the moment I can only find one save slot per planet and there’s no way of backtracking to an earlier stage if you find you’ve made a fundamental error. In the Civilization phase there’s no way I can find of loading ground vehicles onto naval vessels for transport overseas, while gathering food in the Tribal phase can take up a little too much of your time and effort. Still, overall the construction is impeccable.

A lot of Maxis’ technical achievement might not be obvious at first. Spore looks great, with some beautifully rendered cartoon visuals and some of the best lighting you’ve ever seen in a strategy title, but it’s not showy in the way that, say, Crysis is. When you look, however, at how the animators have managed to make even the weirdest creatures – creatures they could never have planned for – move in a believable way, it’s just staggering.


Sound and music are both used with a real grace, adding character or offering subtle cues that actually help you with the gameplay. I don’t think there’s much in the game you could call dumb or thoughtless. 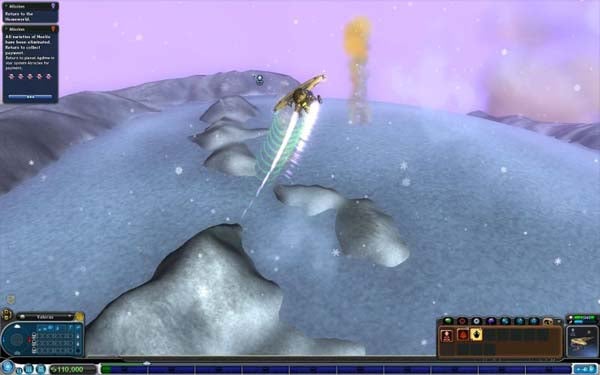 And while it might make you feel dumb, Spore never leaves you thoughtless either. It makes you think about nature, biology, creation and culture, yet never shoves its ideas down your throat. The Space section, for instance, seems a little unnecessary at first; a very odd, almost arcade-like addition after the two strategic phases that have come before.


But then you realise that it’s Spore’s ultimate sandbox, allowing you to drag creatures from planet to planet, mess with the atmosphere, colonise and terraform at your leisure. You realise that all the stuff you’ve been doing up until now is just a tiny part of the big picture, and that you’re playing your own part in Spore’s constant evolution, and that this universe is really, really big – a bit like our own, really – and – possibly like our own – full of all kinds of interesting stuff. This won’t be news to anyone who has read the first paragraph of The Hitchhiker’s Guide to the Galaxy, but Spore certainly rams the point home. 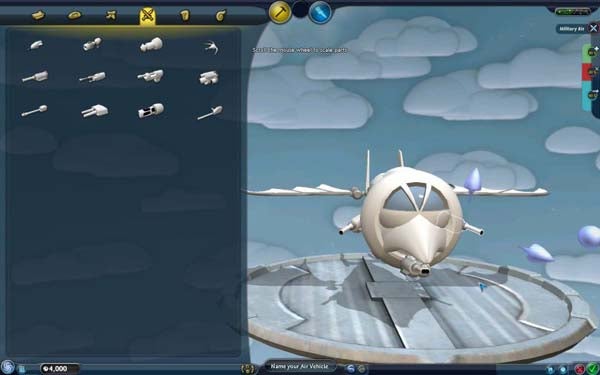 Yet, while Spore makes you ponder, it never preaches. You never feel that the game is linked to (or set against) any particular view or creed (though I imagine it will be an easier fit for Darwinists than creationists). Instead, it just opens up questions and lets you have fun and explore, always building your own little corner of the cosmos in the knowledge that others might be playing with their own version of it soon.

Individual phases have their faults, but the old adage about sums and parts applies, big time. Hardcore strategy fans may shudder and turn back to Sins of a Solar Empire, but anyone with the urge to create and a sense of wonder will find Spore practically unmissable.