I used to despise Sam Fisher – there, I’ve said it. For years I dismissed him not so much as the poor man’s Solid Snake, but as the spy hero for those who preferred lovely graphics at the expense of decent gameplay. Like everyone, I was amazed by Sam’s first appearance on the Xbox. I admired the smooth animation, the stunning lighting, the way Sam seamlessly pulled off a range of cool special moves. But the more I played, the more I grew to hate the way the game funnelled you through one way of doing things, and if you stepped out of line, it was back to the last poorly placed checkpoint. Where Metal Gear Solid 2 gave you scope to experiment, play and simply had fun, Splinter Cell wanted you to conform and play the game the way they meant you to. In truth, I found the first two Splinter Cells a chore – a good looking chore, but a chore I was happy to avoid working my way through. 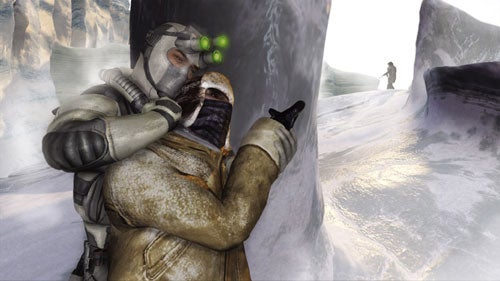 Then something unexpected happened. I played Splinter Cell: Chaos Theory, and suddenly everything clicked. The game was more flexible, the levels more open and appealing, and the mix of creeping, crawling, climbing and techno-wizardry just seemed to work. The game was more generous on the subjects of checkpoints and saving, and you felt you could tackle the levels in roughly any order you wanted. The result was arguably the best espionage game since Metal Gear Solid 2.


And now, with Double Agent, my turnaround is complete. Ubisoft has taken the fine foundations set by Chaos Theory, and built a next-generation stealth game that beats even its illustrious predecessor, not just by virtue of graphical improvements – though these are obvious and impressive – nor by the addition of major gameplay tweaks or checkbox features, though there are a few of these as well. Instead, Ubisoft has added another dimension to the game that takes it to a whole new level. 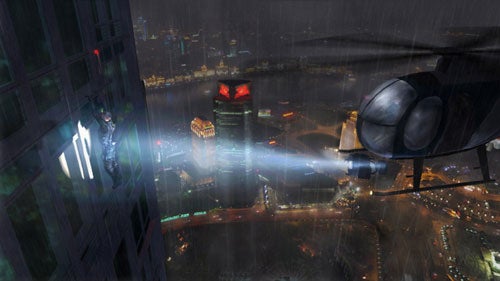 In the unlikely event that you don’t know what this is, the clue is in the title. Following a death in the family, Sam is confronting his dark side, and it’s at this point that the NSA issues his toughest mission yet. He’s to infiltrate a terrorist organisation and pretend to do its bidding, while secretly passing info back to the boys at NSA HQ. If he doesn’t play along with the baddies, he’ll lose their trust and fail the mission, but if he plays along too well, there’s every chance that the NSA will disavow him. Yep (adopt gravely tones of the classic video trailer voiceover) Sam is now a double agent, and he’s walking a knife edge, where failure could cost him his life. 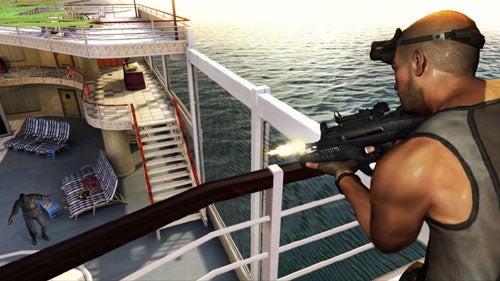 Ahem (coughs). What this all boils down to is this. Sam’s mainstay is still the classic stuff of sneaking, stealing documents and assaulting armed guards from the shadows, but this time he’s doing it ostensibly on the terrorist side. He may have to take over a Russian tanker, steal plans from a rogue scientist in a Shanghai skyscraper or plant a bomb in a cruise ship, but in the usual way he’s given objectives and expected to carry them out. However, while completing nasty terrorist tasks, Sam’s also expected to sample deadly substances, scan secret files and alert NSA forces as he goes, and the beauty of the game is in the way you have to play these different and sometimes opposing sets of objectives off against each other. 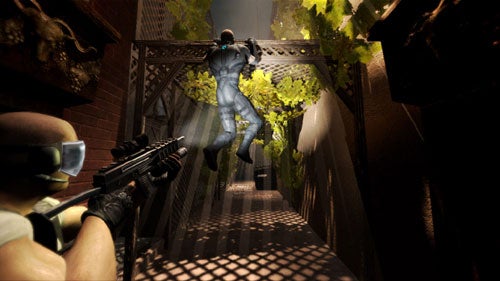 I suspect that someone has been watching 24, because a lot of this stuff is reminiscent of the sort of double agent nonsense we saw in season two. The game’s most suspense-packed moments are set in the organisation’s own warehouse base, where Sam is supposed to be doing training courses or helping out with the preparation of munitions, but where he’s using his spare time to sneak about, bug transmitters and feed personal files and blueprints back to the chaps at NSA. The use of a 25 minute time limit makes these sections pretty tight, and the restrictions on the use of gadgets or behaving suspiciously in key areas adds some much-needed realism to the franchise. There’s the drama as the minutes ticking down, the tension when you’re nearly spotted in a restricted area, and the mild annoyance when you realise that you can’t just rip that guy’s throat out and stuff it down his lungs, because that might just help Sam blow his cover. The game even throws in the odd emotional punch, via some nicely scripted ‘quicktime’ events. Do you shoot the innocent news crew pilot and lose points with the NSA, or miss on purpose and lose creditability with your newfound evil chums. The choice is yours, and as the game moves on your choices have more and more impact on the final outcome. 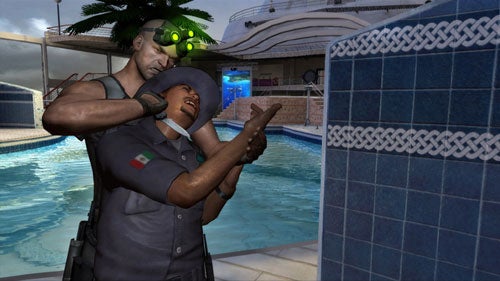 The good news is that the level design is still fantastic, offering plenty of variety and heaps of chances to act out your secret-agent fantasies. You’ve got to love a game where you can swim under the arctic ice, punch a hole below a dozy guard and drag him down into the freezing water. And how can you resist a level where you’re repelling down the outside of a skyscraper one minute, creeping through vents the next, then hopping on the top of a glass elevator for a ride down to a closed off floor? And while you’re at it, you can’t help loving those wry little touches that help make the world feel real, from the bitchy comments in the emails you snoop through, to the ridiculous conversations you can spy on with your laser microphone. The game even throws in a superbly mounted prison break sequence and – who would have thought it? – a touch of romance. Well, as romantic as things get with a character voiced by Michael Ironside. 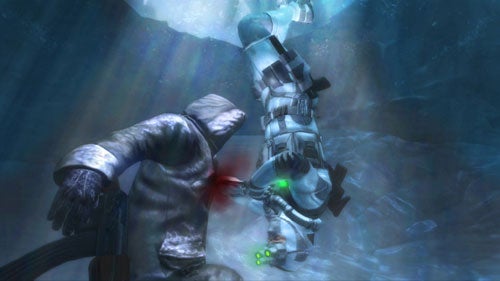 Meanwhile, the series that dazzled us with its visual prowess on the Xbox is doing it again on the 360. In most respects, it looks exactly like you’d expect a High Definition Splinter Cell to look, and those who played Chaos Theory last year on a PC might not be so dazzled on first impressions, particularly after the early renders we first saw at X05 – all dirt, hairy arms and dynamic muscles. But there is some great stuff here when you look; the amount of detail on Fisher’s battle-scarred cranium, the subtle focus shift and blur effects, the superb weather and HDR lighting effects that appear in the arctic and cruise-ship levels. It all comes together to give the game a gritty feeling that it’s never quite achieved before, while the animation is just as strong as ever. Meanwhile, while I think the music in Chaos Theory was slightly stronger, the audio is equally as good; a real lesson in subtlety and dynamics when played on a your 5.1 system, and almost too knot-in-your-stomach atmospheric when experienced through headphones. 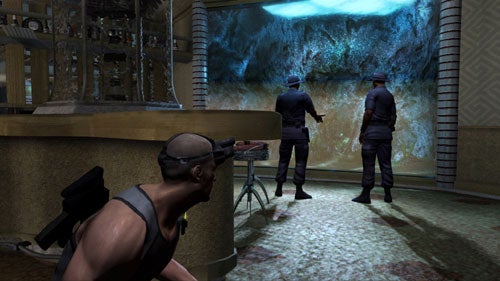 In fact, Double Agent is pretty hard to fault. The PDA interface and inventory system has been streamlined to something near perfection, objectives are clear and logically accomplished, and the combat system is as flexible and refined as it was in Chaos Theory, meaning if you want to knife and shoot your way out of trouble the game doesn’t make it difficult, though it will make missions hard to complete on anything above easy mode. My one gripe is probably the 3D map, which is slightly hard to figure out, though even here I love the way it allows you to track the movement of the other characters and avoid any chance of being discovered. Even if the main storyline is over in ten to twelve hours, you’ll be sorely tempted to return and finish missed objectives or just play nastier or nicer this time around, and that still leaves you one of the best multiplayer modes around, with Mercs vs Spies action and special cooperative missions. 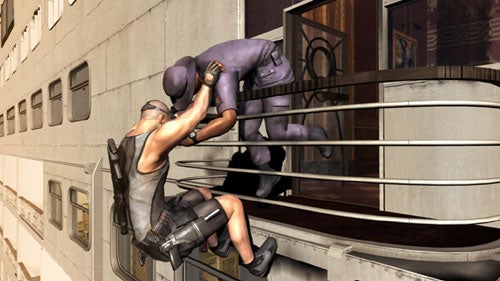 All in all, this isn’t just the best Splinter Cell in the franchise, it’s probably the most consistently great spy game since Metal Gear Solid 1 (I know, I know, MGS2 is a staggering work of genius, but one compromised by its lunatic conceptual elements, which is even more the case with MGS3). Double Agent is also one of the very finest action titles of the year, and one I’d strongly advise any 360 owner to sample. So, if you’ve been a hater of the series since Splinter Cell first arrived, it’s not too late to change your mind – Double Agent might not be double the fun of Chaos Theory, but it’s a game you’d have to be a half-wit to ignore.


The game in which Splinter Cell puts itself up there with the greats. Sneak-em-ups don’t get any better than this.