Augmented Reality seems to be a trend that comes and goes, but It’s a perfect fit for handheld gaming. We’ve seen Sony experimenting with it on PS Vita, and Nintendo made it one of the keystones for the 3DS launch, to the extent of providing AR cards and games in the 3DS bundle. Well, Tecmo Koei’s Spirit Camera feels like the next step forward for AR gaming. It has more than its share of faults – some technical, some gameplay – but when it works it’s an eerily convincing treat. 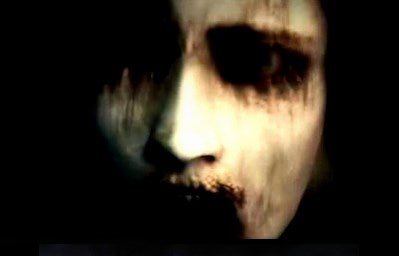 Augmented Reality meets Japanese Horror
Spirit Camera works as a companion piece to the Project Zero series, tieing in to the new Wii Edition of Project Zero 2 and featuring the same mythology and a similar visual style. Horror game aficionados will be aware that while some of Project Zero’s Japanese horror tropes long ago became tired clichés, the second in the series remains one of the creepiest and most downright terrifying games ever made, right up there with Silent Hill 2 and Amnesia: The Dark Descent. Spirit Camera combines Project Zero’s spooky atmospherics with AR to produce an experience with the power to shock, scare and unnerve you, albeit not quite so consistently that you might hope. 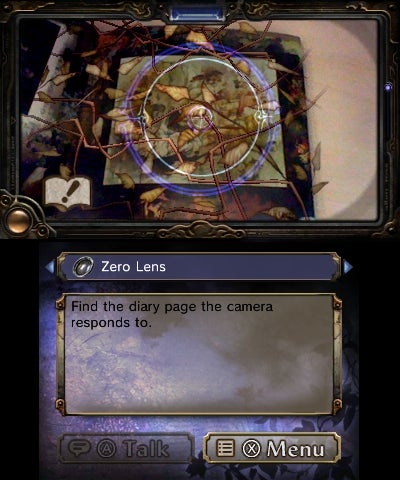 The game comes with a slim purple booklet – the cursed memoir of the title – crammed with mysterious pages and odd-looking photos and illustrations. The game cartridge, meanwhile, transforms your 3DS into the titular spirit camera, enabling you to see supernatural entities both in and out of the book. Point it at a photo at the right moment, and it might come to animated life, or suck you into a strange netherworld that you can only view through the 3DS. Ghosts may be summoned forth to battle, or simple puzzles may have to be sold. Before long you’ll have summoned forth a ghostly assistant – a Japanese girl you’ll find loitering around your living room or kitchen – and you’ll be fighting the restless dead around the three-piece-suite or kitchen table. 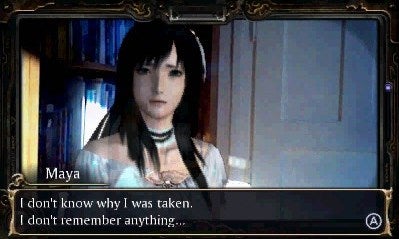 Combatting the Clichés
Of course you’ll have seen and heard it all before; the dark houses, the decay, the spooky girls with long dark hair, the weird ambient noises and interference. Yet at times Spirit Camera really makes it all work, and by blending the real-world with computer-generated imagery, it only makes the experience more immersive. You’ll find yourself flipping through the booklet, trying to find the next page to focus the camera on, nervously awaiting what will come next. Pictures morph before your eyes, or develop thorns, opening doors or creeping hands. 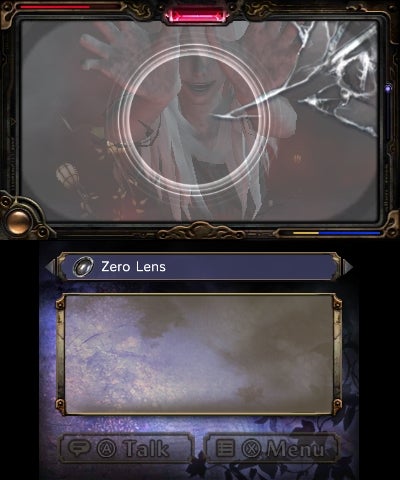 Combat, meanwhile, follows the rules set down by Project Zero, as you use the mysterious Camera Obscura to shoot away at the ghosts when they’re at their most vulnerable. First you have to track them, shifting your gaze around the room until you see them in your sights, then you have to time your attack carefully, firing off when the gauge charges up but before they can successfully attack you – the target ring helpfully glows red when this is just about to happen, and it’s at this point when the ghost will take most damage. Later on in the game you’ll find a few new challenges, with invisible ghosts you have to track through a meter and fast moving ghosts you’ll find harder to hunt down.

Sounds fun? Well, it is, and on occasion Spirit Camera: The Cursed Memoir is effectively scary. Turning on the spot and moving the 3DS to see ghosts in your location or look around a netherworld location is surprisingly convincing, and the AR tech does a great job of holding CG animations to the right spot. Even the 3D effects are convincing. What’s more, there are some great moments involving creepy masks and special lenses, and while you can see the ending coming from a mile away, the tale works pretty well. However, Spirit Camera also has a few major issues which might put you off trying the game. 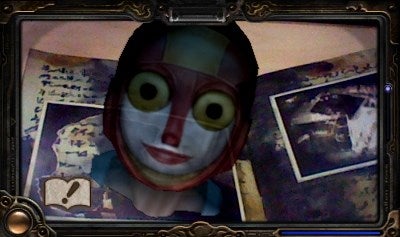 The Spirit Camera Curse
First, it’s reliant on the 3DS’s rear-facing camera, and as well all know this is roughly no cop at all in low light. This means that you have to play Spirit Camera in daylight, in a well-lit room, or it simply doesn’t work. It’s a shame, as it would be more effective if played after dark. If you live in a house with small windows or little natural light, this is not your game.

Secondly, there are some gameplay irritations. The game is constantly stopping you so that you can have a quick natter to your ghostly companion, Maya. Rather than add to the atmosphere, these actively disrupt the flow of the game. The puzzles, such as they are, are frequently too obvious, and a few battles seem needlessly protracted, not least a final confrontation at the end, where cheap shots from the attacking ghost make a game that is normally too easy a bit frustrating. 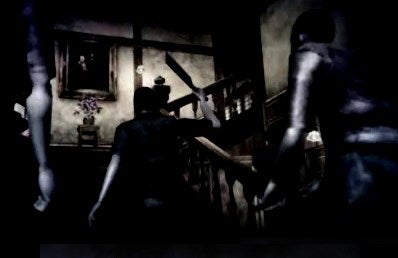 Most seriously, however, Spirit Camera is really, really short. We clocked it in just over two hours, and that was at a fairly leisurely pace. To be honest, being any longer would dilute what works about the experience, and there are some fun extra modes where you can snap the ghosts haunting friends and family or even give battle, or complete simple AR challenges based vaguely on sequences from the game.

Spirit Camera is slightly cheaper than the average 3DS game but, all the same, nobody could say that it offers great value for money. As a £5 to £10 download it would be a must, if only to see the AR tech in action. But is it worth £25? Maybe not. 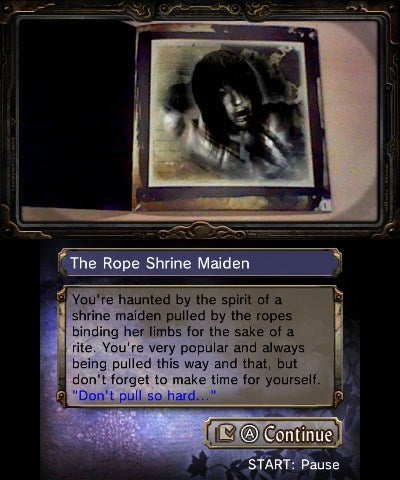 All the same, if you get a chance to play it without stumping up that sort of cash, then we would recommend that you do. Spirit Camera is far from perfect and much too short, but it’s a unique experience that harnesses new technology in very interesting and imaginative ways. There are concepts in here on which better games might one day build something really special, and while Spirit Camera gets lost along the way, at least it’s trying to blaze new trails.

Verdict
Spirit Camera: The Cursed Memoir is arguably the best and most fully-fleshed example of augmented reality gaming yet, but one that’s held back by its short length and by the limitations of the 3DS. When it works, it’s spooky, immersive and genuinely fresh, but it’s a shame that it needs good lighting and that the story is over in a flash.