Last year’s Spider-Man: Shattered Dimensions gave hope to friendly neighbourhood Spider-fans that, finally, the character was with a developer that understood the character, knew his history and what made him tick,and had some idea of how to use all this stuff in a video game. Shattered Dimensions wasn’t Arkham Asylum brilliant, but it was smart and very enjoyable. The mix of four styles of Spidey with four styles of gameplay was a bit awkward, and even the Amazing Spider-Man sections, celebrating our hero in his sixties pomp, weren’t as superb as the Spider-Man Noir sections, with their Arkham-esque stealth take-downs and twisted villains, but there was a promise in the game: a promise that one day, the team at Beenox might come back with a genuine web-slinging, wall-crawling classic.

Well, who knows who’s to blame for Edge of Time. Did Beenox run out of puff? Did Activision push too hard for a one-year turnaround? It’s impossible to say. What we do know is that Edge of Time – while hardly a disaster – is certainly a small step backwards. 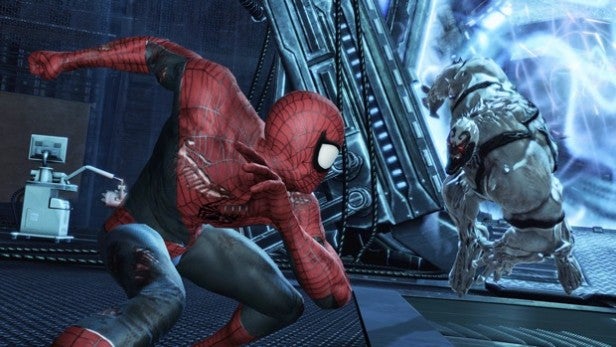 Now, you’d think that if you had a successful Spider-Man game that was split into four separate parts with four separate Spider-Men, you might decide to focus your follow-up on the parts that were most successful. Not Beenox. Instead of following up on the creepy monochrome delights of Spider-Man Noir or expanding on the nostalgia magic of the Amazing Spider-Man, Beenox has decided to focus on the less well-known (and less enthralling) Spider-Man of 2099 and a less stylised version of the familiar Spidey, which ditches the classic comic look of the Amazing Spider-Man in Shattered Dimensions. 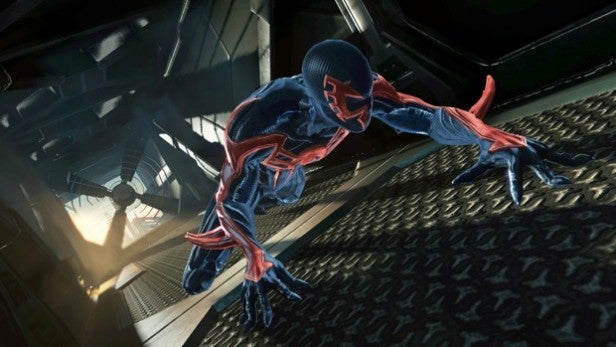 Worse, where Shattered Dimensions gave us a series of distinctive and sporadically brilliant levels that were effectively running battles against the best Spider-Men villains (and their henchmen), we now get a single, slightly generic tale of time travel and mad-science featuring a villain you don’t really care about and a load of rent-a-mob robots, mutants and security troops. 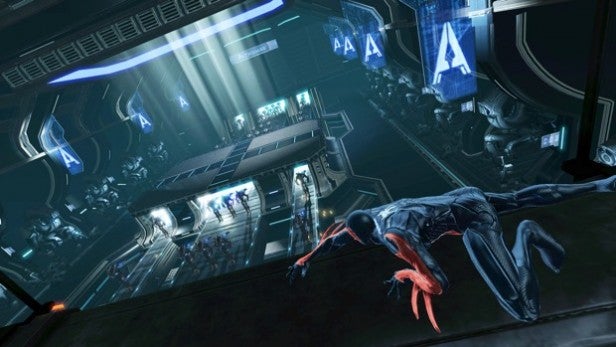 In practice it works like this. Spider-Man or Spider-Man 2099 are fighting against a menacing scientist who has travelled from 2099 to the present day and changed history to put him and his company on top. What’s more, if our two Spider-Men can’t change things, the present-day Spidey will die at the hands of Anti-Venom (the latest version of Venom, for those of us who don’t follow the comics). Some weird pseudo-scientific nonsense link means the two can communicate. At each stage, Spidey or his 2099 compatriot play a chunk of level which usually involves a spot of wall-crawling, a bit of web-slinging, and a whole dirty-great wodge of battering baddies. Every now and then something dramatic happens, or something one Spidey does changes the reality of the other Spidey in an interesting way. At this point, the action shifts from one Spidey to the other.

There are some differences between our two heroes. Spidey 2099 has a special move which leaves his enemies attacking a decoy while he bashes them, while Spider 2011 has a hyper-sense mode which allows him to move fast and whack his foes before they get a chance to whack him back. The close combat – as with nearly every other second-rate superhero epic of the year – bears the influence of Sony’s God of War trilogy, with plenty of hard-hitting combos and a gauge that, when filled up, allows you to pull off an even harder-hitting super move. It works OK, but there’s nothing that distinctive or satisfying about it. 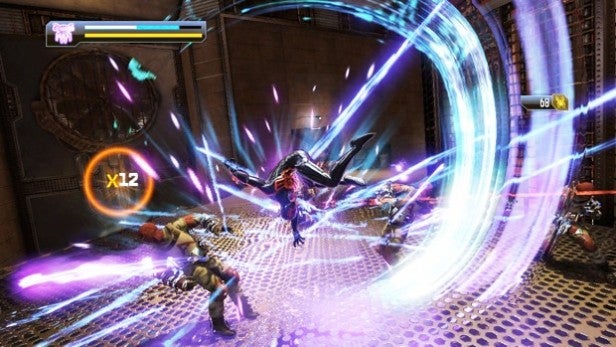 Interspersed with all the brawling we get occasional action sequences which see Spidey 2099 gliding down a shaft and avoiding obstacles, which is exactly as much fun as it sounds, or timed challenges where a location has to be reached or several switches pressed before something disastrous ocurrs. There are set-piece fights, some simple puzzles to solve, doors to unlock, keys to find and the occasional boss battle to get through. Where thought and creativity was lavished on Shattered Dimensions, Edge of Time seems to have come straight from a super-hero game recipe book. 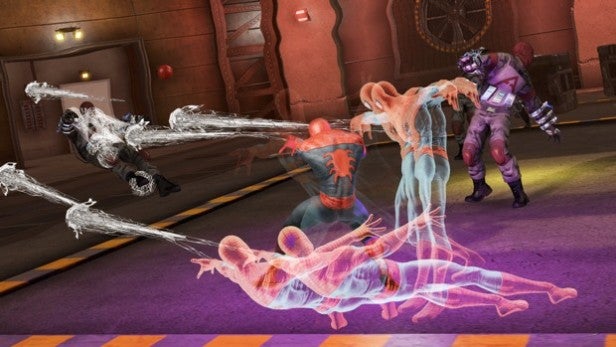 This is a shame. The mostly interior levels do little to capitalise on Spidey’s unique strengths – wall-crawling, web-swinging and acrobatic leaps – and when there is a lot of vertical action, nasty switches of camera angle contrive to make it all a bit confusing. And while you’d think the dual-Spidey angle was tailor made for the kind of world-switching, puzzle solving fun we’ve seen in classic Metroid and Zelda games, there’s none to be seen. After a while, you forget which bit is present and which is future, or why it even matters. 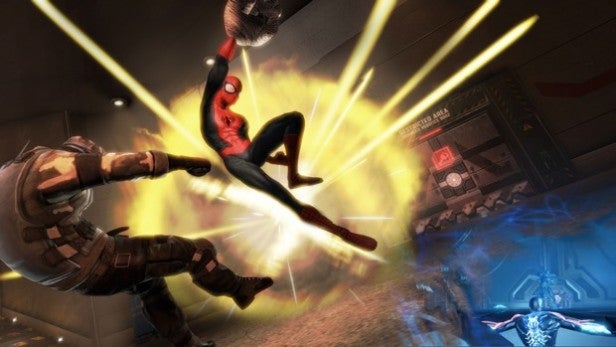 Despite this, the game does have some strengths. The script, by comics scribe Peter David, is arguably more interesting than the gameplay, and there are real moments of drama as the game goes on, with solid voice-work and a nice eye for cinematic camera angles. And while the background scenery veers between cool retro sci-fi and dishwater dull generic stuff, the character models are beautifully done, with lavish detail in the costumes and animation. There are some cool collectibles and unlocks, including some alternative Spidey costumes, and the game is thick in the lore of the extended Marvel universe. This isn’t incompetent hack work, by any means, it’s just unpolished and a bit misconceived.

Verdict
Spider-Man: Edge of Time is no disaster, but it’s a peculiar choice not to build on the strong foundations of the previous Spider-Man game. Despite a decent background story and reasonable graphics, the gameplay feels generic and doesn’t work with the biggest strengths of the star. If you can only buy one super-hero game this week, this one is not the one to buy,