I remember going to see the first Spider-Man movie at the cinema, and the feeling of relief when I realised that Sam Raimi and his team really ‘got’ what made the character work. Watching the transformation from Puny Parker to high-swinging, acrobatic webhead, a CGI Spidey swinging and slaloming through the obstacles cluttering New York’s urban jungle, I could feel the thrill of seeing what my younger, comic-nerd self had imagined when I’d read the classic marvel strips as a kid. Spider-Man the movie had it down. 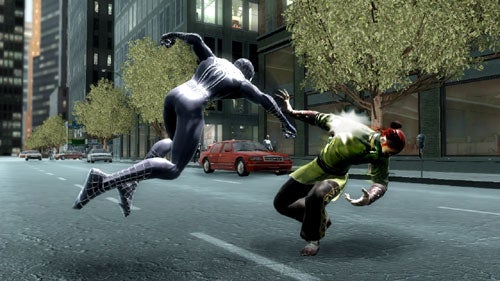 And I got a similar feeling when I started getting to grips with Spider-Man 3, the video game. It has the same sense of excitement at throwing yourself off a building, firing out a line to catch your fall, swooping down low so that you’re inches above the crowds, arcing up back into the skies, releasing the web as you tumble forwards and then shooting another to begin your next swing. Spider-Man 3 has just ‘got’ it. Slowly you learn to maximise your speed, discover how to climb towards the rooftops and sink towards the streets. You find that swinging too close to a skyscraper wall is no disaster; Spidey just runs along it and launches off when he reaches the end. Press the B button and he clings to it, and you can clamber quickly upwards or reach the top in a series of death-defying leaps. This movement is the fundamental part of any Spider-Man game, and Treyarch has got it absolutely, joyously right.


Unfortunately, Treyarch has also got plenty of other things horribly, horribly wrong. 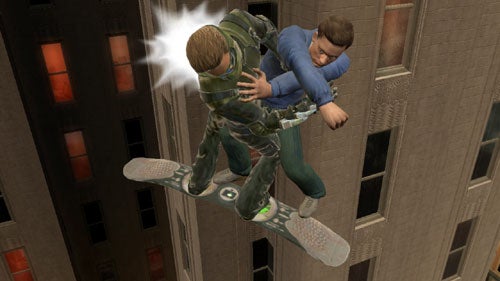 This is a roller-coaster of a game, not because it’s a thrill-ride – though it can be – but because I’ve rarely come across a game that has put me through such extreme highs and lows. One minute you’re blissing out as you swoop and glide through the New York skyline, the next you’re cursing the designers and swearing never, ever to touch this stinking, horrid game again. Visually, it’s a mix of the sublime and the ridiculous, with brilliant animation and gorgeous warm lighting, but some awful modelling and sub Xbox level texturing. The camera behaves itself through one section, then does its best to make the game absolutely unplayable in the next. The difficulty level is plain all over the place. 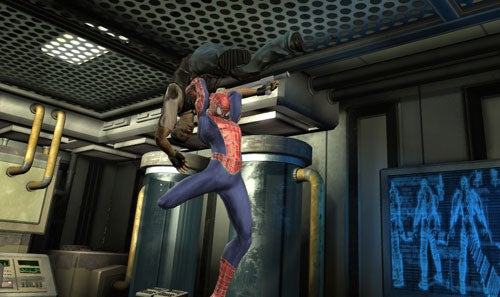 It’s a shame, because Spider-Man 3 has the feel of a project that was kicked off with all the best intentions. It turns Manhattan Island into a crime-fighting open world, throws in three different street gangs and includes several different story arcs, one of which follows the film, the others following various other classic Spidey villains or criminal groups. There are Daily Bugle photo assignments to tackle, getaway vehicles that need stopping and random muggings that need to be halted. There are even speed and skydiving challenges to tackle, Crackdown-style.

When it works, it works very well indeed. The game is undeniably combat heavy, with most of the missions centred on getting to a specific area then battering whoever happens to be stirring up trouble into submission. On the plus side, the fighting system is fairly robust. At first, it features simple combos plus a left-bumper triggered counter-system, which slows down the action, enables you to duck the incoming blow and then gives you a quick button prompt to throw out your own hard-hitting response. As the game goes on and Spidey’s experience increases, you’re then given new combos to play with, and the counters steadily grow in importance. 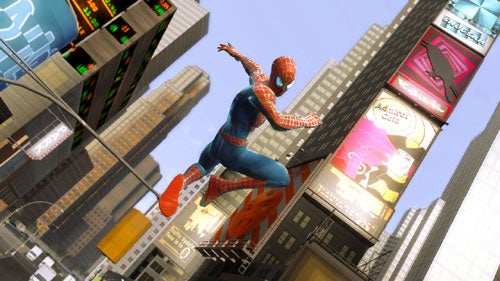 In addition, you learn to use the combo meter, which steadily charges up in battle then allows you to use one of a range of super-attacks once at full strength. It’s a bit of a button mashing affair to start off with, but one of the initial pleasures of the game is the spectacular special attacks you can pull off by random bashings of the X and Y buttons. Learn to pull off webbing friendly moves like the Web Rodeo and the Web Yank and things really start to get entertaining. However, as things progress this changes, and fights demand slightly more skill in evading blows, not getting surrounded and generally using the environment to best advantage.


Sometimes, it must be said, it demands too much skill, not to mention super-human patience. For much of the game, you’ll find yourself wiping the floor with criminal cannon fodder, taking whole gangs apart without much of a scratch on the good old Spidey noggin. Then suddenly you encounter a gang leader or a super-villain, and it’s your turn to get friendly with the pavement. You’ll find yourself blasted, battered and broken within seconds, utterly unsure of what you are doing wrong, or indeed what you might start doing right. And this is where the aforementioned issues with the difficulty level come in. There are fights here where you’ll struggle for maybe an hour or more without making any headway, watching the same inevitable sequence of events go by – a good opening flurry of blows, a vicious onslaught from your opponent, a speedy escape, another flurry, a counter, then a colossal, seemingly undodgeable pounding, finished off with an ignominious defeat. “Retry? Try Something Else?” says the options menu. “How about another bloody game entirely? I’ve got Crackdown here somewhere” I found myself grumbling in response. 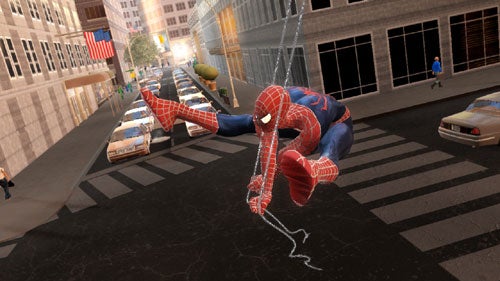 In the worst cases, Spider-Man 3 either surrounds a brutally hard boss character with several other toughs, or prefixes the battle with a tiresome quicktime event sequence. Oh yes, the quicktime event, that scourge of the sensible gamer is back, forcing you to endure several minutes of ‘simon says’ button pressing while a cinematic cut-scene plays out vaguely interactively before your eyes. Played through once, these wouldn’t be too bad – they’re not usually too difficult or potentially fatal, and they offer you a welcome chance to batter the boss’s defences before going on to the fight proper. However, the game makes the cardinal sin that, should you die in a battle that takes place after an event sequence, both you and your opponent will restart with full health. As this then makes the following fight virtually impossible, doing the whole shebang right from the start is the only sensible way to make progress. You could probably have heard my teeth grinding from where you are if you had listened hard enough.

The weird thing is that once you’re past these hideous difficulty spikes you start having fun again, and you start thinking “maybe this isn’t such a bad game, after all. In fact, it’s actually really good.” You do a few missions, swing gloriously through the streets, jump on a fleeing vehicle and – suddenly – everything is peachy in Spidey-land. Before you know it you have the infamous black suit, a new set of attacks and some hyped-up moves, and you’re having fun again. Out come more classic Spider-Man villains and the movie storylines vaguely begin to pull together. Then, just as abruptly, you’re stuck on another stupidly engineered boss battle, or you’re struggling against a ridiculously tight time limit, and you’re getting annoyed once again. Give it half an hour and you’re beginning to wonder whether anyone ever stopped to play-test this thing. Then you’re getting sorely tempted to throw the disc out of the window and find something more relaxing to do with your time. 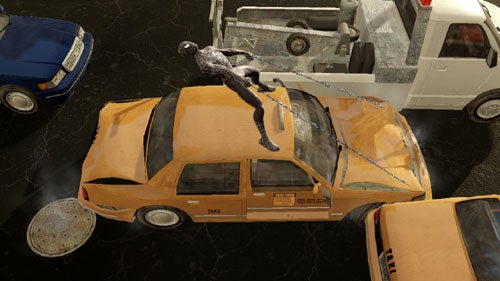 And while you’re doing so, you start focussing your attention on all the other bits that let the whole game down. You realise that, even though Spider-Man’s animation is fluid and totally wonderful, other characters don’t seem to have had nearly the same finesse applied. You might muse on why so many of the gang members look so blocky and awful. You can’t help thinking that, though New York looks great from on high, the sun reflecting off the buildings and all the major landmarks in their place, it’s a little distracting how much the textures seem to swap in and swap out while you’re swinging. And, while you’re griping, don’t some of those wall textures look a bit rough? Meanwhile, you’ll be nothing less than horrified at the clumsy digital renditions of Tobey Maguire, Kirsten Dunst et al. in cut-scenes, with virtual Maguire resembling nothing more than a plastic Thunderbirds puppet that has spent a little time in the Microwave tanning salon. Oddly, using the original actor’s voices only makes this worse. 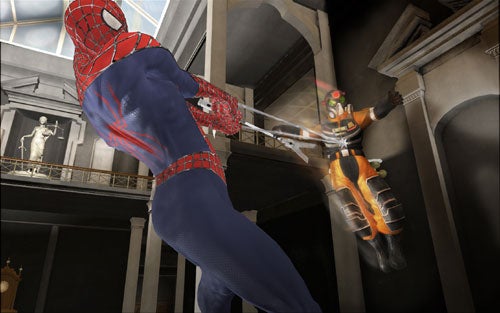 I’ve gone up and down on this one so many times that it’s hard to tag a score on the end and call it quits. When it’s great, Spider-Man 3 is an easy eight out of ten: the core web-slinging puts it up there with Hulk: Ultimate Destruction as an evocation of what it might be like to be that actual super-hero. When it’s bad, however, Spider-Man 3 is a dreary four or five – a game that glimmers with almost realised potential, but can’t seem to keep its act together for more than half an hour at a time. The fact that it tries so hard means it’s still leagues ahead of the likes of Fantastic Four or last year’s woeful X-Men movie tie-in, but being better than the average super-hero movie tie-in isn’t much of an achievement. Just above average isn’t what Spider-Man should be about. He’s the Amazing Spider-Man, the Spectacular Spider-Man. This is merely the Often Great but Thoroughly and Horribly Flawed Spider-Man, and who has time for that?


The fundamentals of a classic Spider-Man game ruined by a careless difficulty level and a host of messy or unfinished elements. Superb in chunks, but still disappointing.