What is the SPRK+?

If you’re familiar with Orbotix’s Sphero robots, it may be as a result of the original spherical robot or last year’s brilliant Star Wars BB-8 replica. While these were primarily high-tech toys, the SPRK+ sees Orbotix getting more serious.

Like the original Sphero and BB-8, the SPRK+ is a spherical robot controlled via smartphone or tablet apps, but where the other two models are designed to work with games or through app-enhanced remote control, the SPRK+ is designed to be programmed. In other words, it’s the Sphero: Education Edition, teaching your kids the basics of coding in a way that’s both accessible and plenty of fun.

The Sphero design is perfect for this kind of thing. The spherical casing moves, with all the logic control, motors and LEDs packed safely inside, and as such it’s one of the most robust little robots around.

To strengthen the SPRK+ further, Sphero has added an extra scratch-resistant YV coating, which successfully fended off some rough treatment inside and outside the house in our tests. What’s more, the entire unit is waterproof and washable, so activities involving paint aren’t a problem, and you can even have your SPRK+ drive a raft. 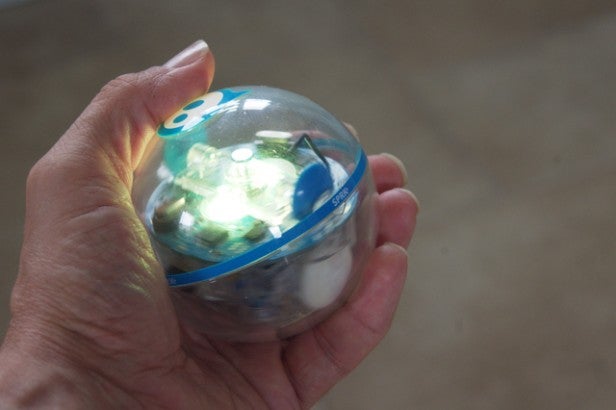 Sphero SPRK+ – What does it do?

Out of the box you’ll need to charge the SPRK+ via its solid inductive charging cradle. This is powered by a standard micro-USB cable, and once in place the SPRK+ will actually rotate itself and pulse with a gentle glow to show it’s charging. Charging takes up to three hours, giving you plenty of time to download the accompanying SPRK+ Lightning Lab app, which works on iOS, Android and Amazon Kindle devices.

This is really where the brains of SPRK+ lie. It’s part activity hub, part junior development environment, where you can code your own SPRK+ programs. You can also download and run ready-made programs, either from Orbotix or the Sphero community, and also run through activities. These include multi-stage challenges or tutorials that might take you through building a city for your SPRK+ through which it can navigate, then coding it to navigate, or setting up a simulated sea-rescue exercise, for example. 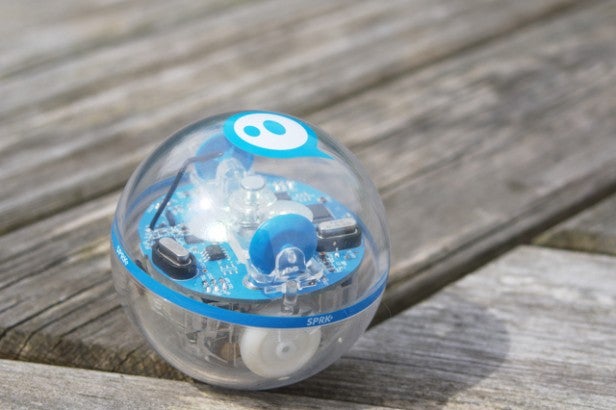 With the SPRK+ charged, it’s ready to – quite literally – roll. Before running a program, you’ll need to pair up the robot with your device; hold it close to your tablet or phone for a few seconds until the two link. You then need to aim it by rotating it using the app until the blue tail-light faces you, after which you can move it to the start position using a simulated analogue pad on the screen. Click the green Start button at the top, and your SPRK+ will run through your code.

If you’ve ever used Scratch, MIT’s kid-friendly coding environment, then programming SPRK+ won’t be a challenge. Like Scratch, it’s based on blocks of code that you drag and drop into a main code window. There’s no need to worry about syntax as such; just assemble the blocks in the right order and the code will run.

Instructions begin with the basics, making SPRK+ move at a specified speed in a specified direction, or making the LEDs glow in a specified colour. However, you can also use the onboard sensors and accelerometers to check for collisions, horizontal or vertical velocity, acceleration and angle.

You can also get the SPRK+ to do more complex things, such as engaging its motors at full-pelt for what might be called a jump, spinning, or requesting the LEDs to strobe or fade between two colours. 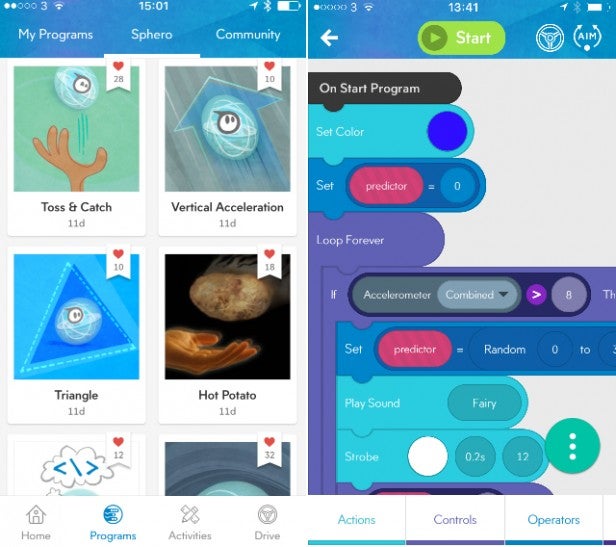 It’s relatively easy and logical, and you can set speeds, angles and other values either by inputting the numbers, or by using intuitive, tap-and-drag controls. And if you’re up for a challenge then the SPRK+ can accommodate you. Loops and If, then conditionals can be added to give your program structure, while you can even work with custom variables and the full range of Boolean operators.

In other words, there’s plenty of scope to start simple but continue to build a useful understanding of the fundamentals of code, which can then be applied to Scratch, Python or any other language your kids want to learn. In fact, you can even see the underlying Oval code beneath the SPRK+ blocks, if you want to understand how they translate to a subset of C.

It’s fun just coding simple programs or downloading the ready-made efforts with which to tinker, but the activities give you more meaty projects to get your teeth into, along with video instructions to help you build the programs, block by block. The only problem is that, on our test iPhone, you could only watch the video and then try to repeat the instructions; a bit of a challenge if your memory needs a jog. 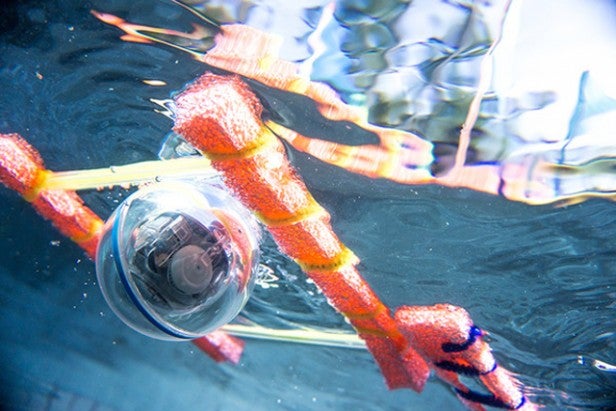 SPRK+ – Other Things to Consider

The SPRK+ is one of those great educational toys that genuinely makes learning fun. My ten-year-old tester loved assembling blocks of code and watching the robot do her bidding; it’s entertaining and the robot gives instant, physical feedback that even programming in Scratch can’t rival.

I’ve had hours of fun just letting SPRK+ run amok around the dining room and kitchen, terrifying other family members with high-speed runs and sudden jumping fits. Even some of the less kinetic exercises can be enjoyable, with the SPRK+ doubling as a hot potato, a Magic 8-ball and a grandparent-scarer. What’s more, some of the background coding stuff is sinking in.

It also plays well with Sphero accessories, so you can get more traction with one of the rubberised Sphero covers or harness it to the Chariot accessory, which works with standard Lego if you want to build more complex constructions. 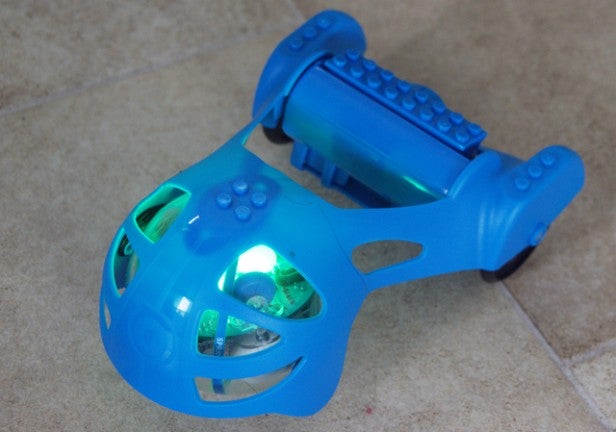 There are some practical concerns, however. For a start, you’ll need adequate space for the SPRK+ to run around in – it accelerates from zero to its 2m/second top speed in no time at all, although you can keep the speed seconds low. While it struggles to run over any grass that isn’t of golf green length and quality, the SPRK+ has no such issues running full-pelt into kitchen appliances – with some potential to do damage.

Battery life may hold you back sometimes. Three hours of charging buys you only around an hour of use – and less if you make heavy use of the jumpy Raw Motor command. In practice, this didn’t prove to be much of an issue, but if you’re working on a more complex project, you may need a recharge midway through.

In addition, it’s a shame that while you can use the Lightning Lab app with other Sphero robots, specifically the Sphero 2.0 and Ollie, you can’t use the SPRK+ with other Sphero apps. That puts the Draw N’ Drive and Golf apps out of the running, along with the main Sphero app.

Given that the Sphero 2.0 and Ollie can be found for a similar price or less, you may wonder why you should opt for the less versatile SPRK+ bot. The only real reason is the transparent case with its anti-scratch coating, which could be a real plus with the kids in control.

Should I buy the SPRK+?

Together, the SPRK+ and Lightning Lab make a fantastic learn-to-code team. The SPRK+ itself is tough, fast and ludicrously entertaining, while the app does a great job of hiding all the educational stuff in fun programs and activities.

While you start with basic programs, you can also tackle more complex and sophisticated projects, giving your kids room to develop, while the skills they learn with SPRK+ can be transferred to Scratch and other coding tools.

Those looking to play with existing Sphero apps and games might want to opt for the Sphero 2.0 and download Lightning Lab to use with that, however.

For those who want to teach kids to code the fun way – the SPRK+ is a brilliant little ‘bot.