What is the Sphero Mini?

Sphero’s balls of robotic fun have been around for a few years now, delivering the likes of the original Sphero, Sphero Sprk+, and even app-controlled Sphero R2-D2 and Sphero BB-8 (of Star Wars fame) models. It’s since diversified somewhat, with non-spherical bundles of fun like its excellent Sphero Lightning McQueen and Sphero Spider-Man toys.

The company hasn’t forgotten what made its name, however. The new Sphero Mini takes a lot of the same fun and shrinks it down to a more pocket- and wallet-friendly package – all designed to once again work with a smartphone app (and your imagination).

The original Sphero and Sprk+ came in at around the size of a boules ball, but now the diddly little Mini is only the size of a snooker ball. It has a hard plastic outer shell that comes in a range of fun, vibrant colours: pink, green, blue, orange, and an all-white option (as of 17/8/18 red, grey and purple versions are also available, exclusively from Apple).

The shell separates into two halves, a bit like a Kinder Surprise egg, revealing the inner robotics, which include a gyroscope and accelerometer. The removable outer layer also means you can buy separate shells if you want to change colours. 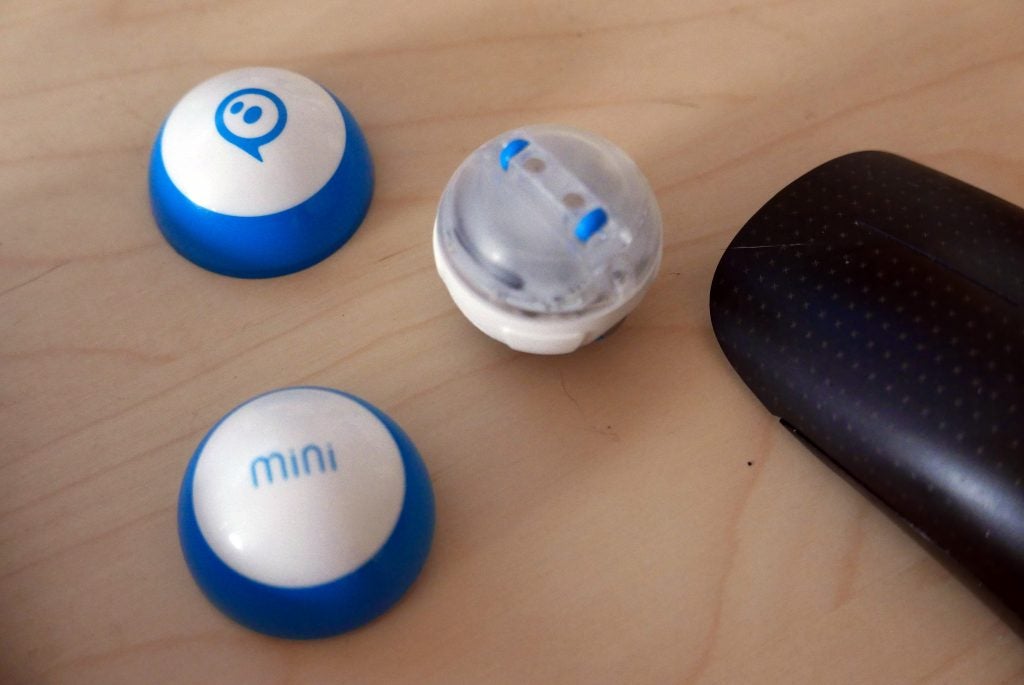 The hardened plastic withstood some serious bangs during the testing period, constantly bashing into the skirting and table legs but living to tell the tale.

You get some accessories thrown in the box as well, which you can use to devise your own fun and games. These include a set of traffic cones – perfect for slalom courses – and some pins for bowling hijinks. The only problem is, there’s not much weight to the accessories. The pins in particular have a tendency to fall over with just a slight brush of your hand, before you’ve even got your Mini in position. 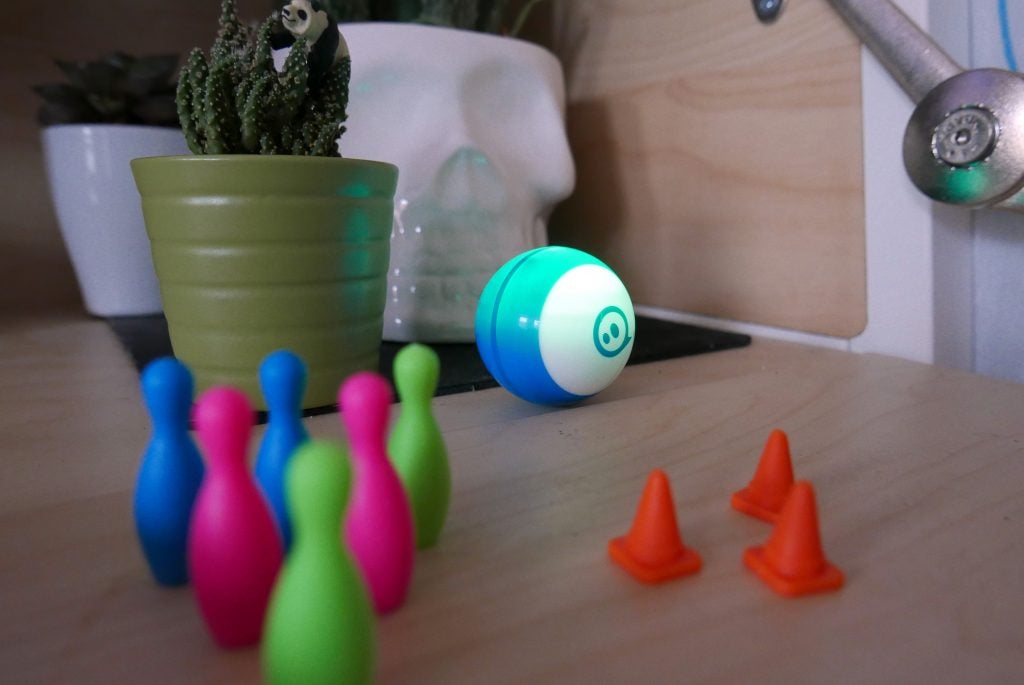 You’ll need to strip down the Mini to charge it up. There’s a micro USB port hidden away, and it’ll take about an hour to charge. That’s a little slow for my liking. The Mini will glow blue while it’s charging, changing to green when it’s done. A full charge will net you about 45 minutes of continuous play time.

As the Sphero Mini pairs with your phone over Bluetooth Low Energy, you can leave it in a low-powered state. This lets your phone remotely turn it on when you’re ready to play, but it does mean the battery slowly depletes over the course of a week. There’s a chance you might return to it to find the battery dead.

You can manually power the Mini off in the app, but to then turn it back on you’ll need to plug it into a power source, so keep that in mind to avoid disappointment while away from home.

As with other Sphero robots, the Mini pairs with a Sphero Mini app for iOS or Android. The design of the app is just as fun and approachable as the little robot itself, with bright graphics and an easy-to-navigate layout that’ll appeal to younger users. 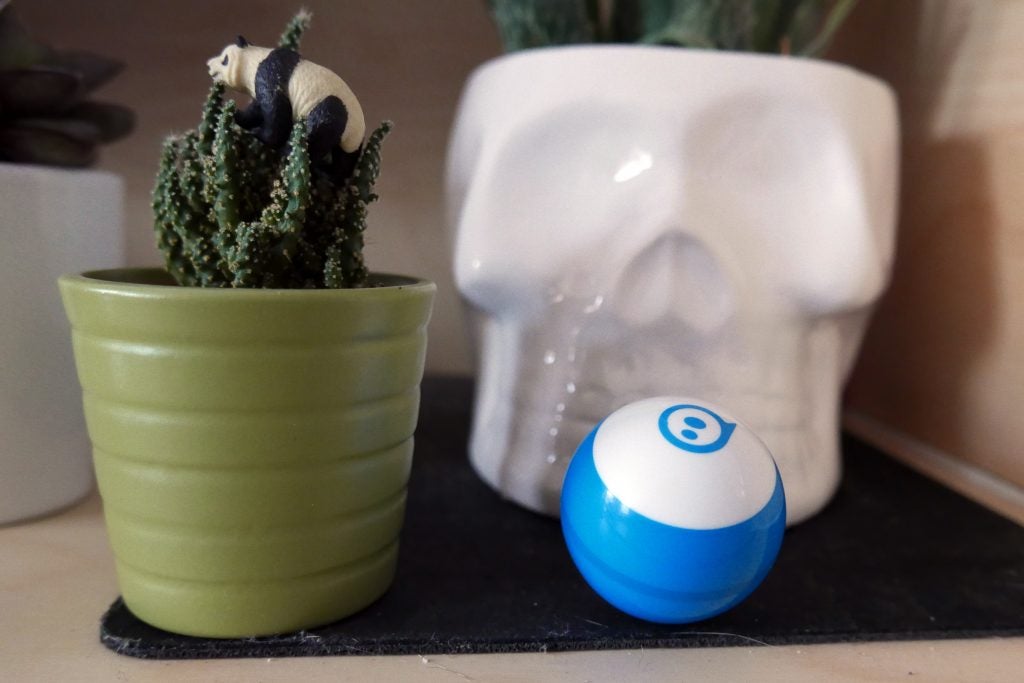 There’s a little bit of work before you can get the ball rolling. First, you pair your phone with the Sphero Mini over Bluetooth. You’ll then need to calibrate the Mini so the controls make sense, as they are all relative to your current position.

To do this, you rotate the on-screen Sphero Mini, which, in turn, will rotate an LED on the actual robot. You’ll want to rotate it so that the LED is pointed at your current physical position. It’s a pretty painless experience, but you’ll need to do this again if you decide to move position.

The app also lets you customise the colour of the internal LEDs, with a vast array of options.

Sphero Mini – How fun is it to use?

Once you’re in the app, you can toggle between various different control methods. There’s the standard virtual joystick, tilt controls, slingshot and, finally, face driving. The latter uses the front-facing camera on your phone, with different expressions and head tilts resulting in different directional inputs.

At least in theory. In practice, I struggled to get the ball rolling with any degree of consistency, and I can scowl with the best of them. Still, it’s something that’ll keep younger players amused for a while until they realise how frustrating it is. Those sad faces that are supposed to make the ball go backwards will soon be very real. 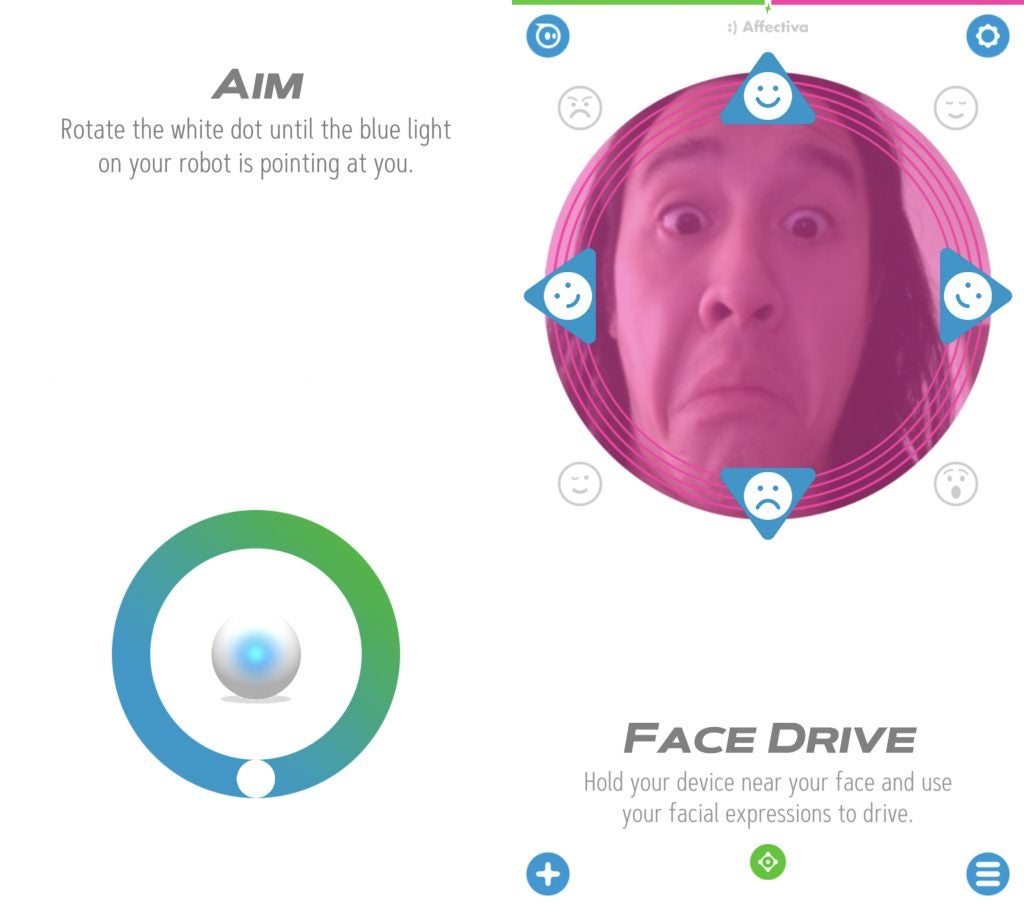 The slingshot mode is perfect for the aforementioned tenpin bowling fun, and the tilt controls feel a bit like playing real-life Super Monkey Ball. Oddly, the tilt controls generally feel more accurate than the joystick.

Using the joystick controls, it’s hard to ever really feel like you’re in control of the Sphero Mini. It’ll often career off at breakneck speed and any course correction takes a split second to kick in, resulting in some impressive crashes. Occasionally, the Sphero Mini would seemingly get stuck in place, too. Any attempt to get it to change direction would just see it spin in place. This was on hardwood flooring too, so it wasn’t getting stuck due to the surface.

The Sphero Mini does much better on laminate flooring, but will still run fine on most short pile carpets – although it might not be quite as nippy (this might be for the best). You never really feel like you’ve got full mastery of the Sphero Mini though, but that can be part of the fun. 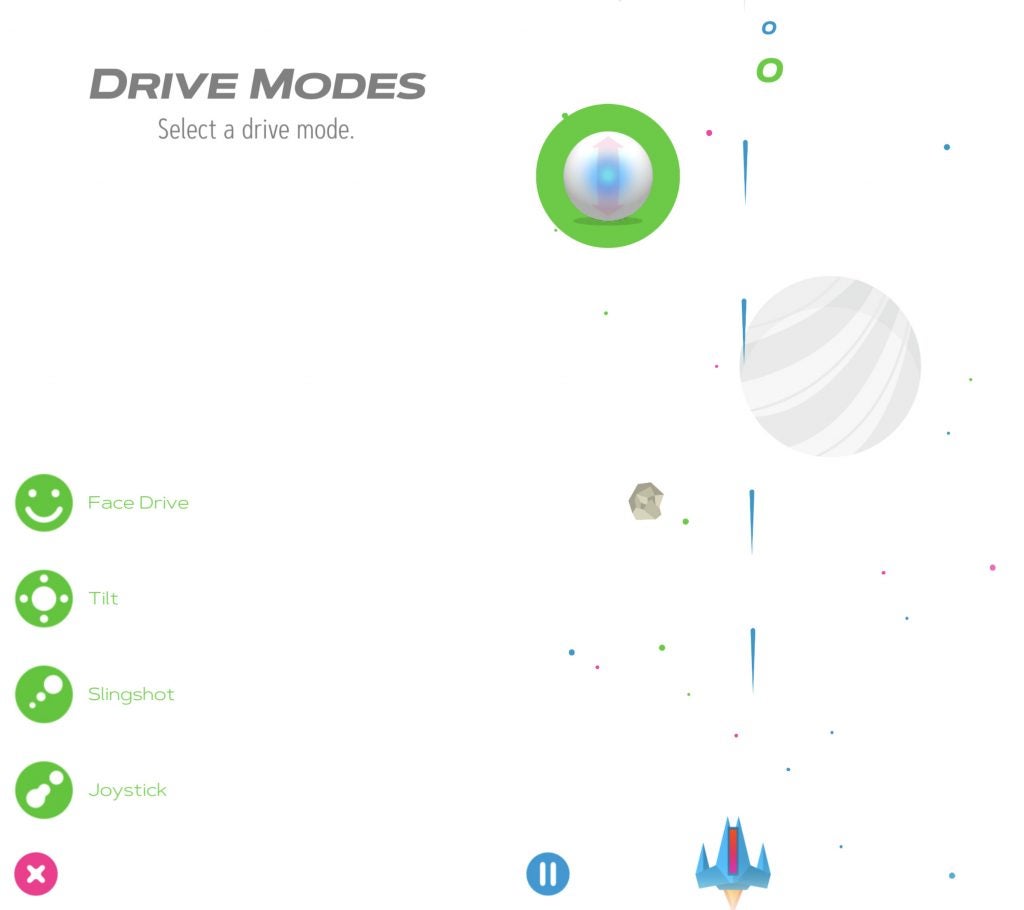 As a side note, for anyone thinking the Sphero Mini might be a fun pet toy to keep your furry friends amused, my two cats were generally nonplussed by the skittish ball rolling around their feet. This was despite the fact they love a similar flashing ball that’s designed to be batted around a helter skelter-like course. Cats being cats; your mileage may vary.

Tucked away in the Sphero Mini app are some basic arcade games that let you use the Sphero Mini as a controller. These include a top-down vertical shooter that sees you rotate the Mini to move side to side. They’re fun as a momentary distraction, but not really much else.

Alongside the Sphero Mini app, there’s also Sphero Edu. This is the same app that’s designed to work with other Sphero toys like the Sprk+. The app is a fantastic introduction to the basics of programming, allowing you to take your first steps in coding. 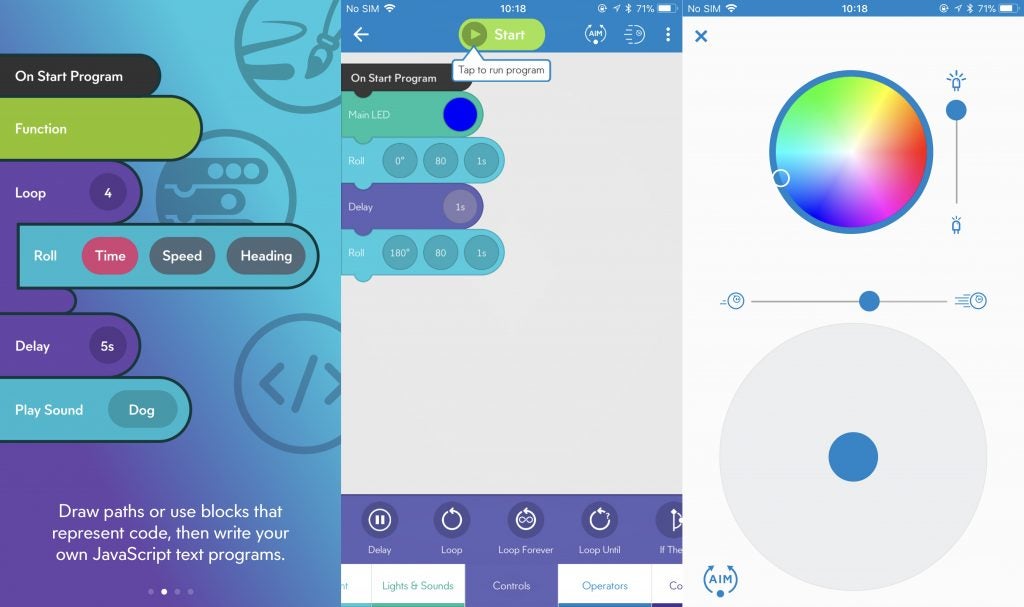 The Sphero Edu makes everything super approachable by simply letting you drag and drop blocks of code, which the little Mini can then run. You don’t have to worry about the deeper complexities of syntax, as long as the blocks are put in a logical order. You can either start your own programs from scratch, or tinker with pre-made options.

You have far greater control over things like speed, so with some time and patience you can do some seriously impressive manoeuvres that are really only limited by your imagination. You can even graduate to using Javascript. 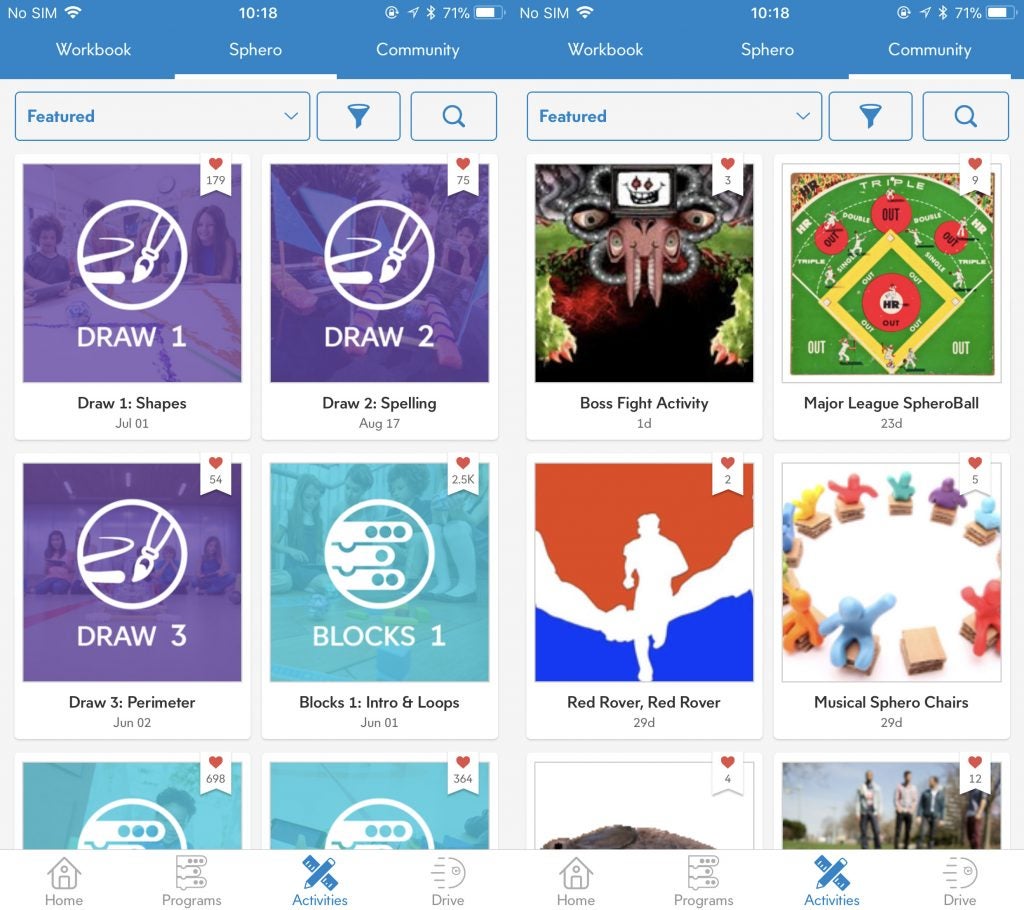 It all reminds me a bit of the programmable moving robots from my primary school back in the 90s. Except now it’s in the comfort of your living room, using a smartphone with infinitely more processing power than the big RM desktop tucked away in my classroom. What a time to be alive!

Why should I buy the Sphero Mini?

Following in the footsteps (rolling path?) of the full-fat Sphero robot balls, the Sphero Mini can be a bundle of fun if you get a little imaginative. While the controls aren’t exactly the most precise – and some are just plain gimmicky – it’s still entertaining to get it hurtling around the room. I just wish the included accessories were a little better quality.

Things really open up with the coding element though. With some patience, younger players can really can have fun while learning a useful skill and importantly it should hold their attention.

Lots of fun in a small package, with educational applications hidden behind the entertainment.