What is the Sphero BB-8 Force Band?

When I was a child, pretending to be a Jedi meant flamboyant hand-waving as I strutted back and forth through the automatic sliding doors at my local Asda – eat your heart out, Obi-Wan. But the children of 2016 can enjoy a much more convincing faux-Force experience, all thanks to Sphero’s Force Band.

The Force Band is basically just a wristband with an accelerometer built in. This allows your phone, which is synced via Bluetooth, to track the band’s position in the air. So when you wear the Force Band on your wrist, you can wave your hand about to control the motion of Sphero’s BB-8 droid – a small, rolling robot modelled after the Star Wars: The Force Awakens character. This is meant to emulate how a Jedi uses the Force, and is a seriously cool alternative to the remote control app. The Force Band is recommended for people aged between 5 and 18, but anyone (adults included) can wield the Force, if willing.

The Force Band costs £69.99 on its own, which is all you’ll have to spend if you already own a Sphero BB-8 droid (or other compatible Sphero). But the Force Band has also launched as part of a bundle, which includes the new special edition ‘Battle Worn’ Sphero BB-8 – at a price of £179.99. Considering that the RRP for the standard Sphero BB-8 is £129.99, and Amazon’s best offer right now is £99.99, this is a decent price.

But is the Force Band actually any good? And is it fun enough to justify the hefty price tag? Absolutely – though it’s not perfect, as I’ll explain. 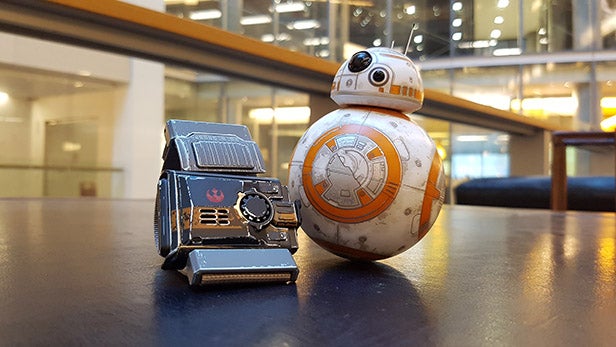 The Force Band is about the size of a small box of matches, and comes with a fairly wide, adjustable velcro strap made from silver fabric, with a magnetic clasp at the end. There’s a button on the face of the Force Band, set against some Star Wars-esque painted designs, as well as a Micro USB port on the side for charging – this is hidden by a dust plug. It’s light in weight at 23g, and is comfortable to wear for extended periods of time.

What’s great is that the Force Band looks like it’s been pulled straight off a Star Wars set, which is impressive considering no such object exists in the Star Wars universe. A Sphero rep tells me the designers went to great lengths to make it look like something a Star Wars character would actually wear, and I’d say they managed it with considerable success. Kids will definitely dig the rusted, battle-worn aesthetics. Grown-ups will love it too, but they may be less keen to wear it in public. Unlike most smart-bands, this thing definitely looks like a toy – by design, of course. 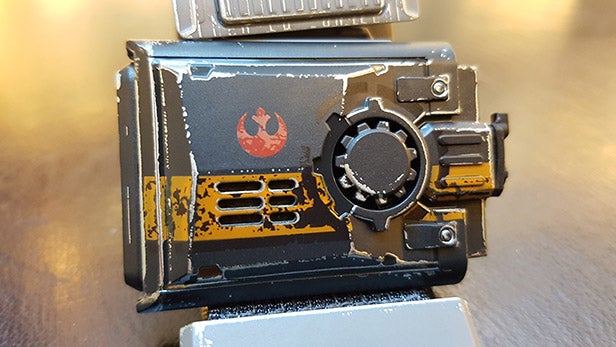 Use of the Sphero BB-8 Force Band depends entirely on the app, so you or your child will need a compatible smartphone or tablet – iOS and Android are both supported.

The app is fairly big, so you’ll need to make sure you have some free space on your phone. It weighs in at just shy of 300MB, which is higher than the Google Play Store’s claimed 261MB. That’s more than the standard (and equally important) Sphero BB-8 app, which will cost you a further 162MB. On my phone, it’s the seventh biggest app, eating up three times the storage that Crossy Road uses, but using just two thirds of the space Facebook requires.

Once you’ve installed it, there’s a fairly lengthy setup process that I found particularly painful. I’m going to detail this depressingly drawn-out process exactly as I experienced it, because it might be how you spend your Christmas morning. 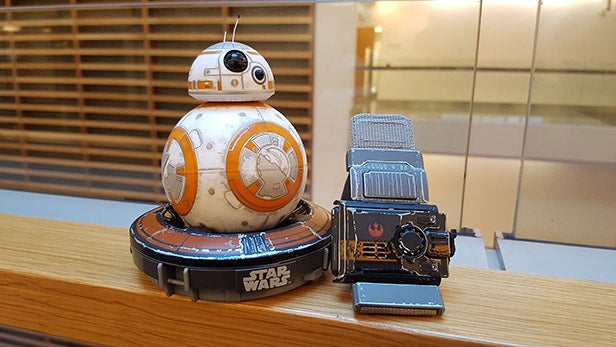 First off, you’ll have to input your age, and then commit to the terms of use and privacy policy – all kosher so far. Then there’s a page that prompts you to enter your email address, signing you up to regular Sphero offers. Fortunately, you can skip this, although you may not realise it, because the ‘X’ to avoid sign-up is tucked away in one of the corners, in a tiny size-4 font. A dastardly trick, but not uncommon.

Then, hold your smartphone near the band to pair the two devices – this took about 90 seconds for me. Once that’s done, you’ll be prompted to accept a mandatory audio update, with a warning that it may take up to 60 minutes to complete. You’ll also need to keep the app open and the band plugged in during the update – Merry Christmas, everyone. The good news is that the update only took me about 22 minutes, but your mileage may vary.

Right, so now can you use the Force Band? Not quite. There’s another (equally mysterious) audio update, and it’s even bigger this time – the ETA is 120 minutes. My phone beat the prediction again, managing the update in a hare-like 45 minutes. Once completed, you’ll be prompted to unplug your device, at which point a short introduction video will start, during which Obi-Wan Kenobi explains how your new band has actually had many owners (refund much?). 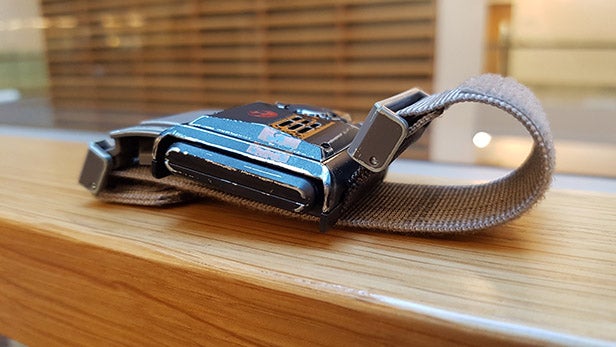 I’m torn over the setup process. On the one hand, it’s by far the worst thing about the Force Band – it takes way too long, and will put a serious dampener on your Christmas morning festivities. On the other hand, you only have to do it once, so most wannabe Jedi will be able to look past the first-use faff. If you can suffer through Jar Jar Binks, you can survive this.

So what can the Force Band actually do? Well the primary function is controlling the Sphero BB-8, so I’ll start there. Once you’ve paired it with your droid, you have a couple of gestures at your disposal. Throw your hand forward, and the BB-8 drives forward; pull your hand towards you, and the BB-8 spins around and starts rolling back to its owner. Raising or lowering your hand dictates speed, while side-to-side sweeps dictate direction. It’s the closest you’ll ever get to being a Jedi, and it’s great. There’s an undeniable joy that you’ll feel when you’re driving a droid with little more than the power of your mind (read: Bluetooth).

The gesture controls are accurate enough to use, although it’s significantly easier to use the BB-8’s smartphone app. I’ll be honest, I was seriously inept at directing the BB-8 with the Force initially, although I did improve with practice. After an hour, I could guide the droid through a rudimentary chair-leg slalom with reasonable success, although doing it with the BB-8 in reverse was a feat far beyond my abilities – perhaps a trip to Dagobah is in order? 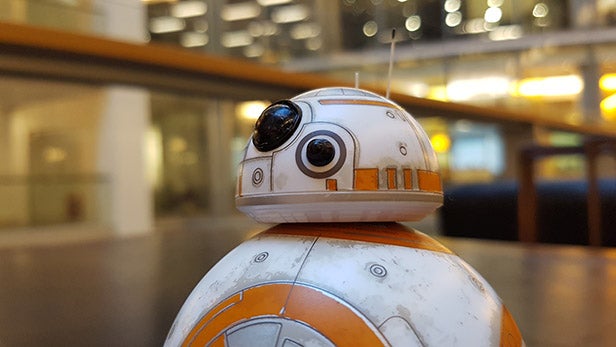 As far as performance goes, I never lost connection to the droid. Occasionally, I had difficulty re-calibrating the BB-8’s orientation in relation to me, but you get the knack of it over time. Sphero says the Force Band has a 30-metre range with the droid; my house isn’t that big, but I gave it a run in the office over that distance, and it worked just fine with direct line of sight. And with a 60-minute battery life, you’ll get plenty of fun per charge.

Probably the biggest hurdle for most people will be finding the space to use the BB-8. I’m fortunate to have a living room that runs straight through into a kitchen, which gave me a decent 15m runway. But with tables, chairs, and rugs all impeding the BB-8’s path, it’s tricky to use the droid at its maximum speed. This is arguably a fault with the BB-8 itself, rather than the Force Band, but due to the added difficulty of controlling the droid with the Force, the failing is more obvious. I definitely recommend considering whether your home can accommodate a BB-8 before dropping a load of cash on one.

The good news is that the Force Band has other functions too. There’s a cool feature called ‘Digital Holocrons’, which lets you collect items from the environment around you. As you travel around, you’ll be notified of nearby holocrons, which you collect using Force gestures. These holocrons unlock weapons, like a lightsaber or blaster, that you can ‘equip’. Once equipped, you can swing your hand about and the Force Band will simulate the noises of that item through its built-in speaker. I have no shame in admitting that I actually found ‘wielding’ Han Solo’s blaster more fun than controlling the BB-8 droid. And if kids have a lightsaber or blaster toy, the fun factor will be significantly greater. 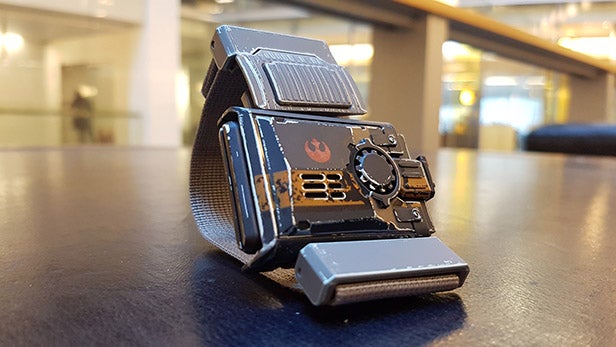 Finally, there’s a Force Training mode that lets you complete mini-games – including controlling a virtual BB-8 – to improve your skills using the Force Band. They’re reasonably fun to begin with, but quickly become repetitive – not a standout feature by any measure, but great for practicing your skills.

Overall, there’s plenty of fun to be had from the app, and a Sphero rep made it clear to me that new features would be added over time. Whether you (or your child) enjoy the holocron collecting, lightsaber waving, or BB-8 driving most remains to be seen, but they’re all great fun.

Should I buy the Sphero BB-8 Force Band?

As a standalone toy, the Force Band isn’t enough to captivate – £69.99 is a lot of money, and you’ll lose out on the primary feature without owning a Sphero BB-8 too.

But with the Sphero BB-8, the Force Band is fantastically good fun. Kids and adults alike will relish the opportunity to live like a Jedi, if only for fleeting 60-minute sessions. It can be frustrating to learn proper Force technique at first, and the initial setup process seems unnecessarily laborious, but you’ll quickly become fond of the toy. 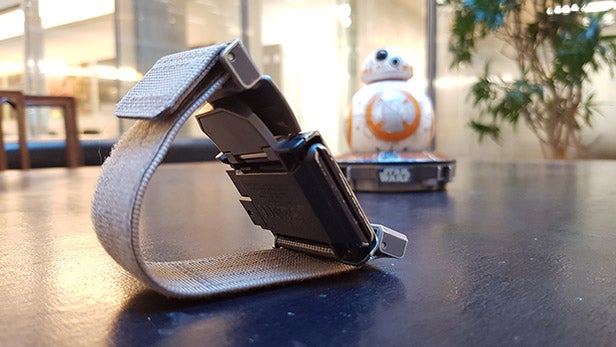 Probably the real question you have is whether you should just get the Sphero BB-8 on its own, or the Force Band too. The Sphero BB-8 is undoubtedly the better standalone toy, and its pricing reflects that. And although enjoyable, the Force Band doesn’t add much functionality to the droid beyond a new control mechanism. That said, the functionality that it does add is seriously cool, and you’ll struggle to find a child that won’t have at least some fun with the Force Band.

Realistically, £180 is a lot of money to spend on a toy. It’s arguably worth it, because it’s unique. Most kids will like it, and fans of Star Wars will absolutely love it. Plus, you’re buying into a franchise that is still hitting cinema screens, so your child is probably going to feel renewed fondness for their Sphero BB-8 every December for at least the next few years.

The Force Band is as fun as you’d expect, so it’s definitely a holiday season must-have for budding Jedi and seasoned Star Wars fans alike.