What is the Bolt?

You might know Sphero for its BB-8 and Lightning McQueen connected toys, but the company and its spherical robots also have a serious side. The Sphero Bolt is the latest in a line of programmable Sphero toys designed to teach kids coding. The toys work alongside the Sphero Edu app to teach basic concepts through a block-based visual language, much like Scratch, or – for more advanced students – through JavaScript.

It’s effectively a suped-up version of the 2016 SPRK+, taking the same spherical form, clear-plastic casing, dual motors, sensors and LEDs, but adding an LED matrix to display simple images, messages and animations. What’s more, Sphero has thrown in new light sensors, infrared sensors and a magnetic compass, adding new capabilities for enthusiastic coders. If at times the SPRK+ felt a little limited, the Bolt is bursting with potential. With a little ingenuity, you’ll be amazed at what you can do with it. 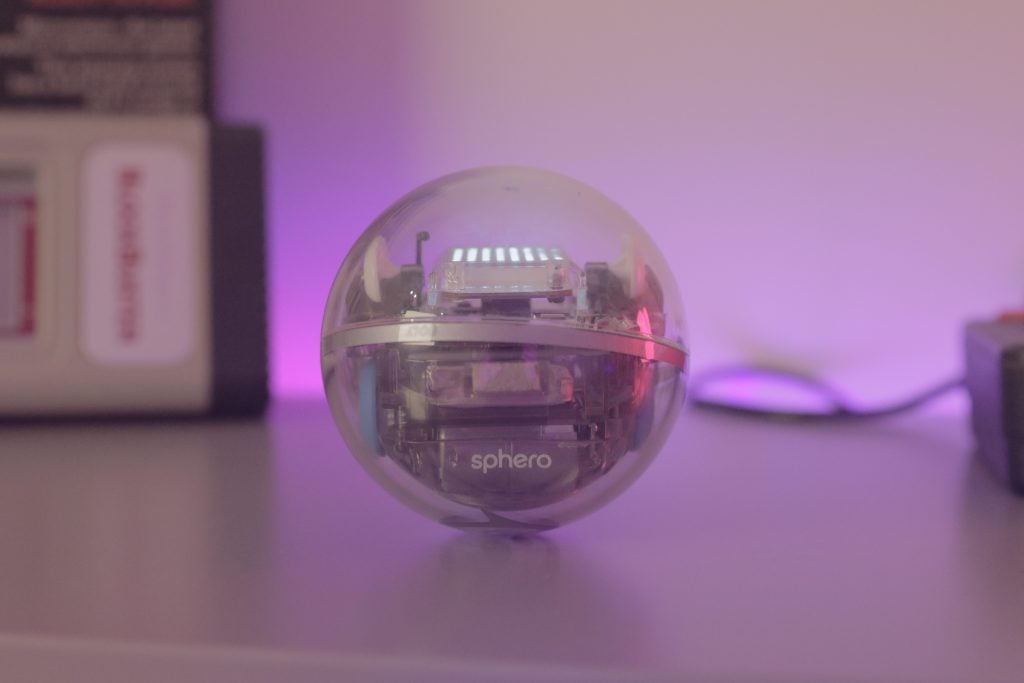 Sphero Bolt – What does it do?

While the Bolt can be driven around with a touchscreen controller in the Sphero Edu app, it’s really designed to be programmed, responding to commands that tell it where to move at what speed and in which direction, how to rotate and when and how to flash its built-in LED lights.

Crucially, it also responds to conditionals and the data coming from its sensors. As such, you can program it to change direction if it collides with an object, or stop moving and flash if it has travelled a certain distance or reached a specified velocity. Previous Spheros made all this super-accessible using the Scratch-like block-based language, yet you could still pull off some impressively sophisticated results.

The Bolt only adds to the opportunities. The 8 x 8 LED matrix might not sound that exciting, but you have full control over the colour and brightness of each LED. This enables you to construct simple images and multi-frame animations using a simple editor that’s cleverly built into one of the command blocks.

What’s more, different blocks allow you to run scrolling text messages across the display, so that you can put ‘Hello World!’ or a wide range of looping insults on the sphere as it rolls around.

That’s the biggest plus for the Bolt over the SPRK+, but you shouldn’t underestimate the new sensors. For instance, you can use the light sensor to have the SPRK+ react to different ambient light levels, or to respond when you shine a torch on it. You can, if more navigationally minded, use the new compass to take exact directions and help the Bolt find its way from one point in the room to another, even around obstacles or through a maze.

The new infrared sensors – and matching emitters – come into their own if you have more than one Bolt. These enable one Bolt to message another, and you can then use conditionals to state what happens when that message is received.

Get a few Bolts together and you can create some pretty cool multi-robot spectaculars, although with just the one Bolt we haven’t had much of a chance to try this out. 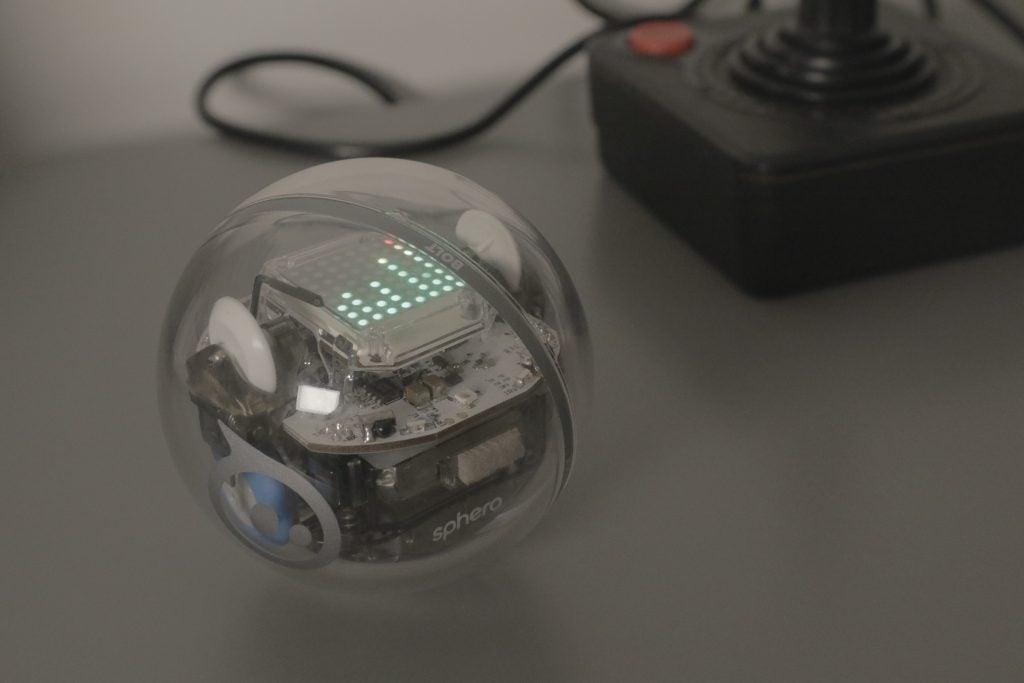 The Bolt connects using Bluetooth LE through the Sphero Edu app itself, with the app working as a portal to both your programs and any programs that other users have shared – you’ll see these entering a Facebook-like feed every time you launch the app. These give you the sense that you’re part of a growing community – and also some great (and not so great) examples you can use as inspiration or to learn a new trick.

If you’re used to Scratch, the actual coding couldn’t be easier. You simply drag out blocks from a palette at the bottom of the screen and slot them in on top of another – or within one another when you’re working with conditionals and loops.

You can tap specific zones in a block to specify values or drag variables and arguments into place. Collision detection is easy as dragging an ‘On Collision’ block into the active area, and because you can use data from the Bolt’s own sensors as a variable, you can create programs where the Bolt reacts to the outside world.

I’ve used Scratch a fair bit over the years, and my 12-year-old daughter has been using it at school. While Sphero Edu’s interface isn’t quite as intuitive as Scratch’s when it comes to switching quickly between block categories or different views (the blocks palette at the bottom has a lot of work to do), the way that blocks clip together and work isn’t vastly different.

Loops, conditionals and variables work in much the same way. Both my daughter and I found Sphero Edu easy to work with – although it’s arguably easier to get a grounding in Scratch then transfer the skills over, than to start working with Sphero Edu from day one.

There was a lot you could do – and a lot you could teach – with the older SPRK+, but the Bolt opens up a range of new opportunities. The Bolt’s high-speed zooming around the floor is entertaining enough, the new graphics, animations and text messages make the results of all that coding even more immediate and visual.

The more you learn about the Bolt, and the more you think about what you’ve learnt, the more new projects open up. The built-in projects and tutorials do a fine job of developing your skills and getting you used to the new capabilities, although you really need a separate PC or tablet to work with so that you can have the projects and sample code visible on another screen while you’re working in the app.

If there’s one ever so minor disappointment, it’s that there’s no onboard sound. While you can code in sound effects and even tunes, these play through your tablet or smartphone speaker, rather than through the Bolt. 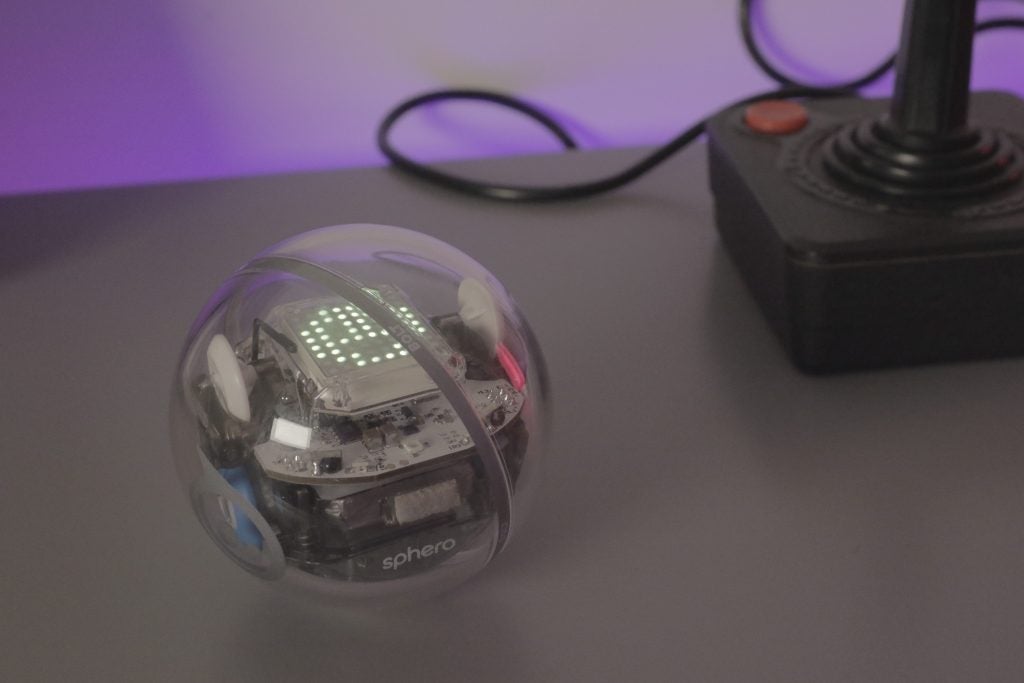 If you prefer you can code for the Bolt using JavaScript, and the Sphero Edu app has a separate development mode for working in this way – you just opt for block-based or text-based coding when you start a new project up.

The mode has some nice mod-cons, such as auto-formatting and error-reporting, while you can view the incoming sensor data both during and after running a program. This helps when you’re trying to adjust speeds and timings or debug.

Cleverly, you can also program in the block-based mode, then open up a side panel to see the corresponding JavaScript. Not only does this provide an easier way into working with the Bolt in JavaScript – you can see how the instructions relate – but you can even cut and copy the code from the block-based mode and paste it into the JavaScript mode. This can be handy if you’re struggling to get something working and your syntax correct.

The Bolt charges on its own compact charging cradle, and will keep going for roughly two hours between charges. It’s water-resistant and incredibly robust as well, although I’m wondering if the same can be said for the furniture and kitchen kickplates it’s been hurling itself into at full pelt. 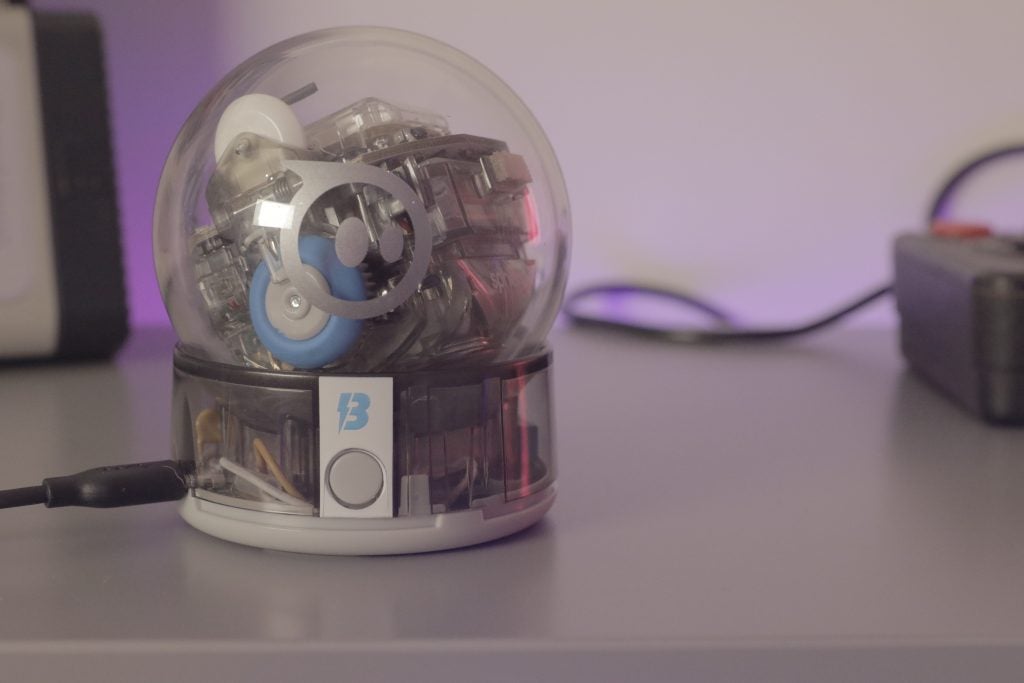 Why by the Sphero Bolt?

At £150 the Bolt seems expensive, but it feels like a tangible step up from the SPRK+ – and a more versatile rolling ‘bot. It brings interesting new capabilities for kids to work with, both on the display and the inputs side, and it’s supported by one of the biggest and most mature tech-education systems around.

Nothing beats Scratch as an accessible way into coding, but the Bolt does an amazing job of bringing a similar block-based approach to life and getting kids excited about what code can do.

If you’re looking for a way to encourage a more active engagement with technology, this will prove a hundred times better than most tech toys and kid-friendly gadgets.

A great way to get kids coding.