Speed Racer is so close to being a great blockbuster adaptation that it actually makes me angry that it isn’t. Warner Bros. had the perfect movie for a racing game, then had the sense to hand it to Sidhe Interacive, the New Zealand-based developer of the underappreciated GripShift titles. Sidhe then had the smarts to model its family friendly racer on Nintendo’s much loved F-Zero series. How could the game go wrong? 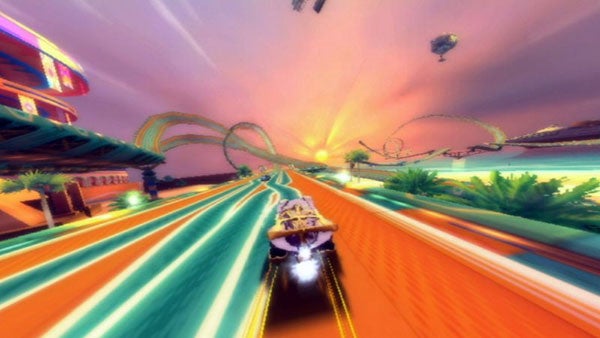 Well, before I go into that we really ought to talk about all the stuff that has gone right. Some might call it lazy and derivative thinking, but I think taking inspiration from F-Zero was a stroke of brilliance. F-Zero and Speed Racer already have a lot in common – a stylised futuristic setting, high-speed racing and a colourful cast of heroes and villains, In fact, the game runs with the common themes to the extent of aping F-Zero’s comic-book presentation, complete with overlaid panels that have characters spouting dialogue. And if the influence of the N64’s F-Zero X and the GameCube’s F-Zero GX was already evident in GripShift’s twirling, looping, rollercoaster tracks, then the courses in Speed Racer are paying a full-blown homage. 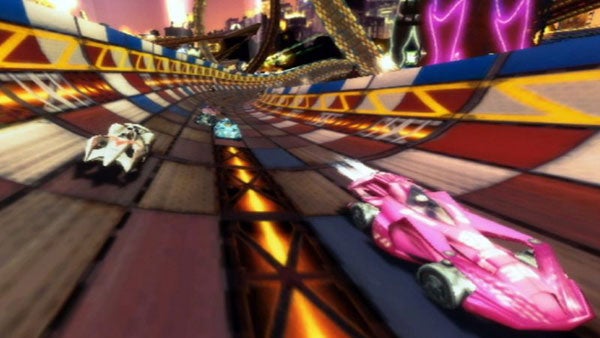 This is good news for any F-Zero fans who can’t wait for a new version on the Wii, and there are times when the rush of speed, the pack of racers at your heels and the vertiginous slopes and loops of the course almost convince you that this is exactly what you’ve got. However, there are some obvious differences. First, we have the Wii controls. Speed Racer gives you a choice between using the Wii Wheel or holding the Wii remote horizontally and tilting it Excite Truck-style. Whichever you choose, the controls hit a good balance between sensitivity and stability, and the game doesn’t go too hard on 90 degree turns or hairpin bends in any case. For me, the wheel wins just because it adds a little something to the fun factor. 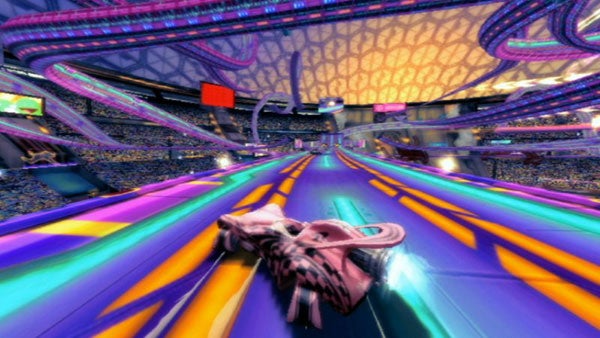 Better still, Speed Racer isn’t just a straight rip-off in the gameplay stakes; it also adds a new twist – Car-Fu. Inspired by the ace racing stunts from the movie, Car-Fu is a way of earning boost and taking down your rivals, using a selection of spins, flips and barrel rolls to whack other cars on the track. Jerk the remote or wheel left or right in tandem with a quick press of a D-pad button and you can get your car whirling on the track, knocking seven bells out of the competition. Jerk the wheel up and you jump, and by combining this with a press of the D-pad you can dish out the damage with cool barrel rolls and flips, throwing rival racers into the air or crushing them under your tyres. Car-Fu moves can be combined, with different effects according to your current position and alignment, and the more you do the more boost you’ll earn. Charge up enough boost and you can ‘go into the zone’, triggering a massive, screen-blurring boost that sends you flying through the pack like a speeding bullet.

Car-Fu takes a bit of getting used to, and there will be a period during which you’ll wonder whether the effort is worth it. It’s never 100 per cent guaranteed that you’ll come out of a scuffle in a better state than your victim. In the long run, however, your efforts will be amply rewarded. Once you’re out of the initial Class 1 championships you’ll have precious little chance of getting a podium place without using your crazy Car-Fu moves. 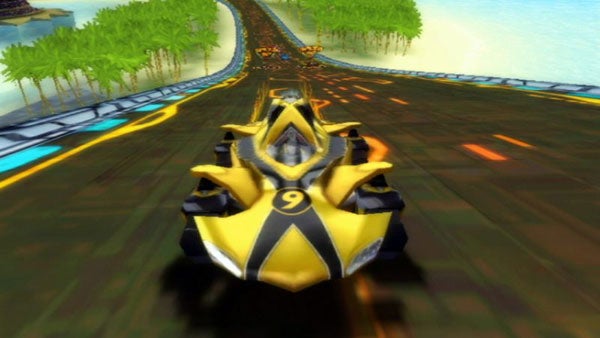 In terms of gameplay, then, the fundamentals are all in place. Graphically and sonically, too, Speed Racer is a more than decent effort. It’s not as good looking as F-Zero GX – one of the finest looking games to grace the GameCube – but it does a good job of bringing the exuberant colours and retro-futuristic design of the movie to the smaller screen, and there’s enough background scenery and trackside furniture to help produce a convincing sense of speed. The music – presumably imported from the film score – is as pounding and urgent as it should be, and if the vocal samples grow repetitive the longer you play, there are enough of them that the repetition doesn’t grow incredibly annoying. In nearly every area that counts, Sidhe Interactive has done a fantastic job. 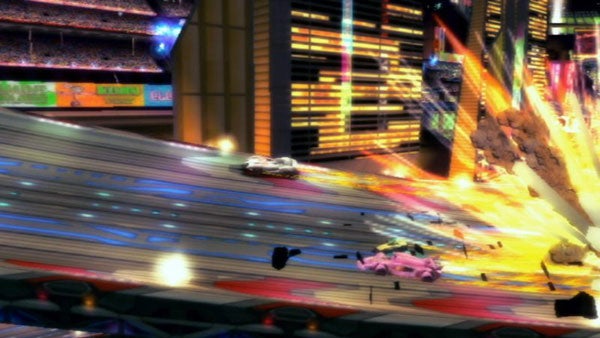 So where do things go wrong? Well, for me the biggest issue is the AI and the way it handles your rival racers. For one thing, Speed Racer rubber-bands the pack of racers like you wouldn’t believe. For another, the competition is extremely aggressive, constantly trying to whack you from behind or eager to put a stop to any attempt you make to get in front. The problem eases the better you get at Car-Fu, but there’s no getting round the fact that you spend 90 per cent of your time literally fighting your way through the pack, at which point you’ll frequently get clobbered, resulting in a depressing and practically instantaneous drop from first or third to twelfth, thirteenth or fourteenth position. 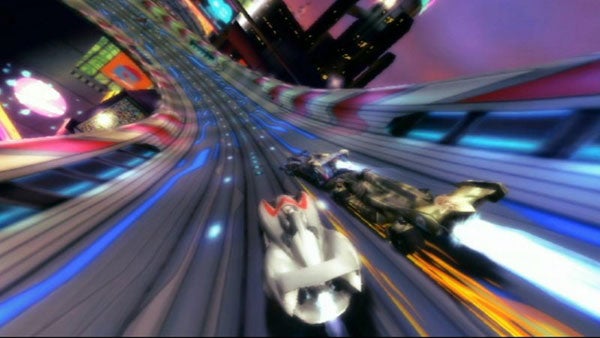 In some of the shorter races it’s a matter of luck whether you can actually make it to the front before your two laps are over. In the longer endurance races, you’ll go from first to fifteenth so many times that your only hope is that you happen to be in the right position at the second that you cross the line. In an adult game, I’d find this exasperating, but in a game aimed mainly at kids it’s inexcusable. Keep scrapping through and you will eventually win your way through the three speed classes and their championships, but it sometimes feels like it’s more a test of persistence than racing nerve or skill.

Now there is a way to soften this: make use of the game’s clever system of alliances and rivals. Before each race you can request, accept or decline these ties, and the more alliances you build, the less Car-Fu you’ll find yourself on the receiving end of. However, the more alliances you have and the fewer rivals, the less boost you’ll earn through your own Car-Fu. This is a great idea, and helps give the game its own distinctive character. Does it solve the rubber-banding and constant clobbering, however? Not nearly as much as it should. 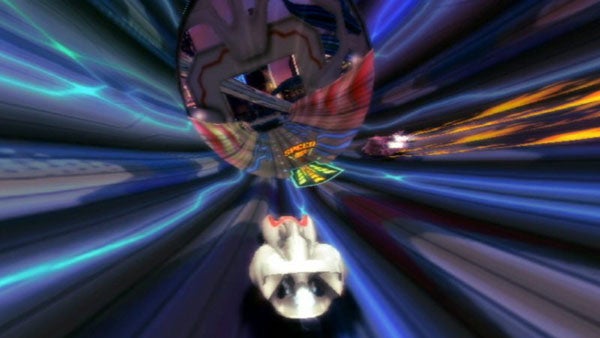 On the plus side, the difficulty level in later races helps to hide the game’s other major failing: lack of content. There are really only five tracks, even if the game has several variations on each. Despite changes in the theme and background scenery only one or two of them really stand out from the others, and you can’t help wishing both for more courses, and for those courses to be more memorable than they are. Multiplayer is limited to two players on the same console, with no online options, and once you’re through the three speed classes and their championships, the only thing to keep you coming back is the time trials. Compare this to the wealth of tracks, game modes and online options in Mario Kart Wii, and Speed Racer doesn’t seem like such a great package overall. 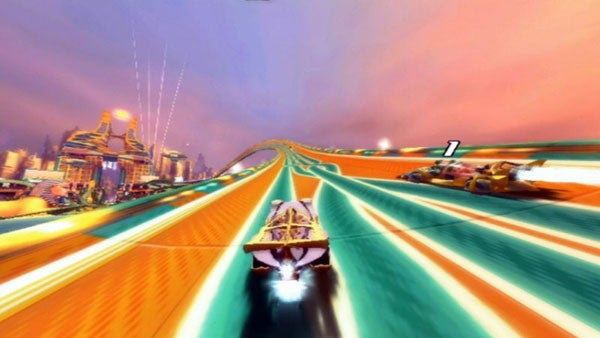 It’s a shame. Early on I had Speed Racer down as one of the least cynical and most accomplished movie adaptations I’d seen in years, and it was only once I found frustration in the later races and the same five environments repeating that my initial good impressions fell apart. Even given my reservations, I’ve no doubt that any kids who fall in love with the film and its world will get something out of the game, but they – and we – could have got so much more if only the AI wasn’t so aggressive and Sidhe had been a bit more generous with tracks. As it is, anyone with a copy of Mario Kart won’t see much reason to opt for this instead. And if you’re that desperate to play F-Zero, then you’re better off sticking the old GX disc into your Wii.


A fine family-friendly racer with a few intelligent tweaks on the classic F-Zero style. Sadly though, over-tuned AI and a lack of content hold Speed Racer back from achieving its full potential.