The other day some of our acquaintances from CCL came into the TrustedReviews offices. CCL had been kind enough to supply us with the recently reviewed Razor Diamondback Plasma mouse for review and during the conversation the subject of other gaming peripherals that CCL supply cropped up. Two of these I found of particular interest – a Saitek Eclipse keyboard and a Medusa 5.1 Surround Headset. For me, these two items together with the Razor mouse soundedg like three essential gaming items. The Diamondback is a high precision optical mouse that’s perfect for left-handers such as myself, the keyboard with its blue backlight would enable me to play games late at night in the dark as I am wont to do (review coming soon), while the Medusa headset would enable me to play at full volume in surround-sound, without waking the rest of the family up.


Naming a headset Medusa does seem unusual but if you know your Greek mythology if makes perfect sense. Medusa was a woman whose hair consisted of many snakes and equally the Medusa headset is many headed as rather than just the normal two drivers, the headphones contain multiple speakers in order to mimic the effect of a 5.1 surround field – two for fronts, two for the back, one for the centre and one for bass effects. 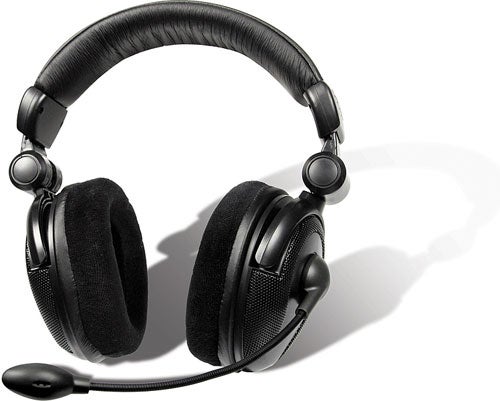 The appeal is obvious. It’s not always possible to play with a full-on surround speaker setup and when you switch to a regular set of stereo headphones, you lose that front to back feeling. With its new X-Fi sound card, Creative makes much of the fact that you can obtain a 3D soundfield from a stereo source but not having heard it myself I can’t vouch for its effectiveness. However, our reviewer Paul Weir wasn’t that bowled over by the effect, though as he admitted some are more sensitive to it than others.


Speed Link is not a name I’ve was previously familiar (turns out its big in Europe) and not one I’d associate with audio but then again neither is Zalman who also produced a set of 5.1 headphones. I own the Zalmans making me well placed to compare to the Medusas. Firstly, the Medusas are more conventional looking, though that’s not too hard compared to the frankly bizarre looking Zalmans. They’re also more comfortable to wear, thanks to the Medusas having a thick velvety pad around the earphones and a padded headband. The headphones are of a closed back design which helps to increase bass. It also ensures that sounds are kept in so that you don’t disturb others nearby. This makes them ideal for LAN parties, where everyone can play together, but also in their own world, without disturbing each other. To aid portability, the phones fold up into the headband making them that bit more portable.

One immediate factor that makes them superior to the Zalmans for gamers is that there’s a microphone, turning it into a headset rather than just a pair of headphones. This is attached to the left hand speaker and can be easily rotated upwards out of the way when not required. The boom mic arm is completely flexible so can be positioned in just the right place for optimal pick up. It’s a good quality mic too and I tested in games and using Skype. Making a Skype Out call, the person at the other end said that my voice quality was fine and sounded no different to a regular phone. 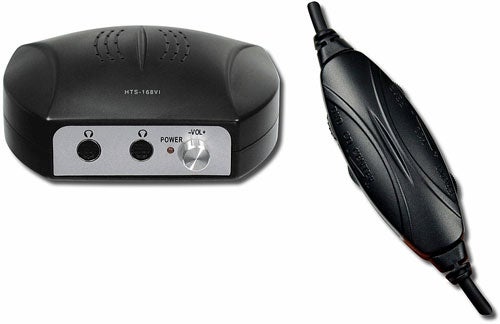 The biggest problem with the Zalmans for me, and the reason I eventually stopped using them for games, is that they had to be directly connected to the 5.1 output of your sound card. If you ever wanted to go back to your speakers you had to unplug the Zalmans and reconnect them. This proved to be a major hassle, especially as accessing the rear of my PC was difficult due to the confined space of my room. The Medusas however get round this by having an external amplifier. You connect your sound card to this via the inputs but there’s also a set of outputs for your speakers. The headset connects to one of two ports on the front of the unit. Turn off the amp and the sound is passed to the speakers. This is perfect for when you’ve got the house to yourself and are free to enjoy your speakers blasting out for a while.


There are actually two headphone ports on the front of the amp, enabling you to plug in a second pair. This means that two people could enjoy a DVD movie in surround sound without disturbing anyone – a neat feature. Indeed, the Medusas are available as a twin set.

Unpacking the Medusas I was a bit disconcerted by the velvety lining of the box, which rather was rather disconcertingly coffin-like. I was also put-off at first by the sheer mass of cables. This meant I actually left the headphones and came back to them when I had more time. I also took the unusual step of consulting the manual. This made connecting it all up fairly straight-forward. The reason that there are so many cables is that you can also attach the amp to a six-channel PC sound card or to a regular DVD player. Additionally if you feed a digital signal into a 5.1 amplifier with analogue pre-outs and then into the Medusa amp, you can enjoy 5.1 surround sound from your games consoles over headphones. If you want 5.1 headphones without an amp in between then you need to go for a set of HCT DH-720G Portable Home Theater Surround Headphones which come equipped with a decoder for an a digital stream sent over an optical cable. 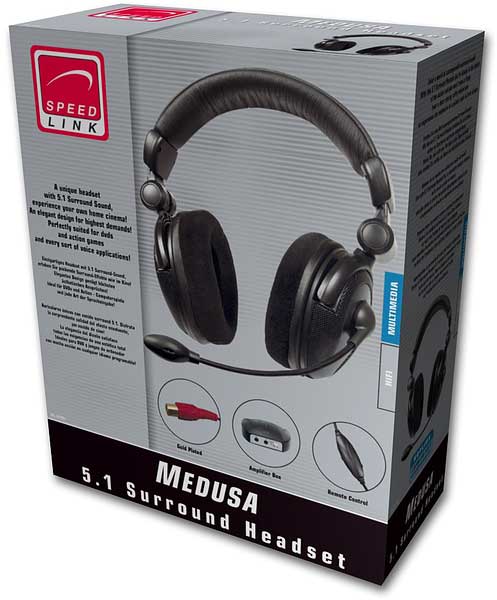 One annoyance I found when connecting up was that the rear and centre/sub cables are labelled blue and red respectively instead of black and orange, which is the standard on most sound cards. Another issue is that the amp doesn’t include a pass-thorugh for the microphones so that you if you want to use it you have to connect it directly to the sound card, normally at the rear of your PC. There’s an extension cable that makes this possible but it’s a shame it’s done this way as it adds an extra cable dangling around.


What’s great though is that the remote on the cable actually has four separate volume controls for the front, rears, centre and bass, enabling you to set up the sound as you prefer. There’s a master volume control on the amp.

So how do these speakers actually perform? Pretty well, actually. They sound better than the Zalmans with a crisper sound and more bass. There nowhere near as good as my Grado SR60 stereo pair set but then those are considerably more expensive so that’s to be expected. 5.1 performance was convincing depending on the content. When using the Creative mixer test on an Audigy 2 each channel could clearly be located in each location and the same on a PC with integrated Realtek HD Audio. Using the latter I first tried out Half-Life 2 in 5.1 mode but for some reason I could only hear audio over the centre and sub channel unless I switched to stereo. I triple checked the connections but everything seemed fine. I then tried Splinter Cell: Chaos Theory and in this case the surround affects worked superbly. Standing on the shore at the very start of the game I could hear the waves swishing from front to back as they swept under me and sounds moved around convincingly in the game.


In DVDs the performance was decent too, though to get a real sense of the surround will depend on how much the director uses discrete sounds in the audio mix.


For regular stereo music I was again pleased with the performance. Sure a regular stereo set at the same price will be better but it was still involving with enough clarity bass and treble for the occasional listen to MP3s. 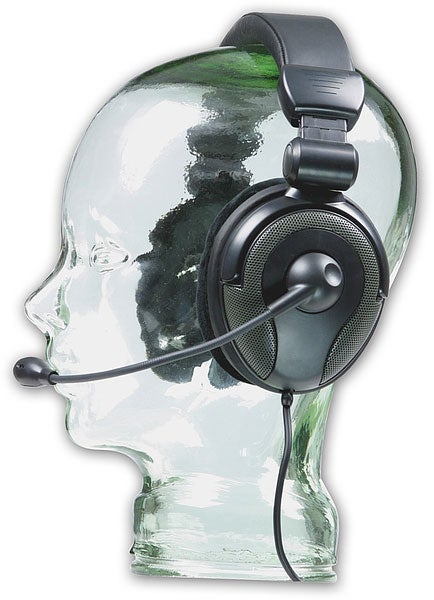 The weight of the headphones does mean your ears will get a bit hot after a while, making it more tiring that using speakers, but if that encourages you to take a break from gaming then it’s probably a good thing.


Overall, there’s no way you can say that these are as good as having a real surround sounds speaker system, but if you have to go for headphones these are a fantastic alternative. You retain 5.1 surround, you don’t have to unplug your speakers and you can individually adjust the volume for each channel. You also get a good quality integrated microphone and you can listen in pairs to DVDs if you get the twin set. They’re comfortable to wear and they don’t sound half-bad either. So what the damage? Remarkably CCL is offering them for only £36 – less than that of the far less flexible Zalmans. If you’re a gamer that likes surround sound and you need a headset, these are nothing less than essential.