In the saturated iOS accessories market, it’s hard to stand out. The Speck Handyshell iPad 2 case has managed it though, using a great big – almost comically big – handle on its back. It may look ridiculous, but it’s useful.

Bearing the red and dark grey colours of a cartoon magnet, the handle of the Handyshell doesn’t try to sink into the background. It’s for the best though – at its size it would have trouble doing so. 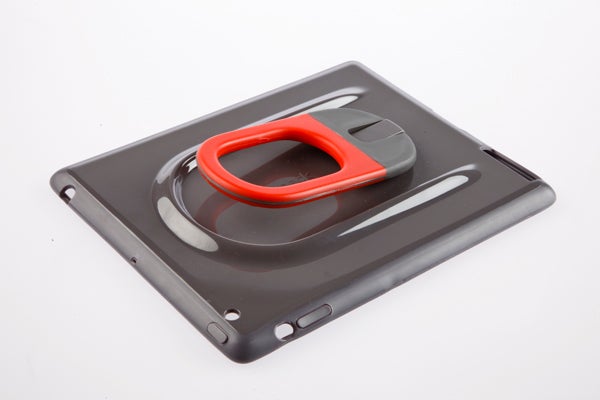 The red part is rubberised for extra grip, and is the part you’re meant to hold onto. As the key feature of the case, it’s a little surprising that it only folds out one way, but it works as intended. Crucial to its usefulness, it’s strong enough to hold the iPad 2 securely at any angle it can extend to. If the Speck Handyshell didn’t, it’d be all-but useless.

On the Speck website, it is suggested that the HandyShell might be used to hook the iPad up – the best-use situation being in the kitchen, while using the tablet as a recipe book. Speck has identified a niche and is going for it, head-first. It’s not a niche we’re part of, but we can appreciate it exists. 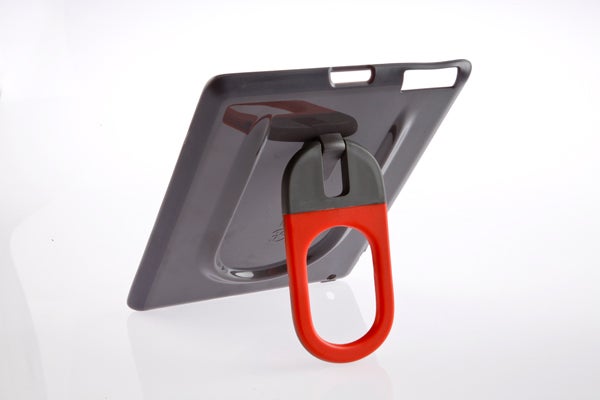 To make up for the aberration on its back, the rest of the case is very simple-looking. A purplish-grey colour and contour-hugging, it tries to add as little extra girth as possible to the tablet. However, its construction is a little more complicated than it at first appears. 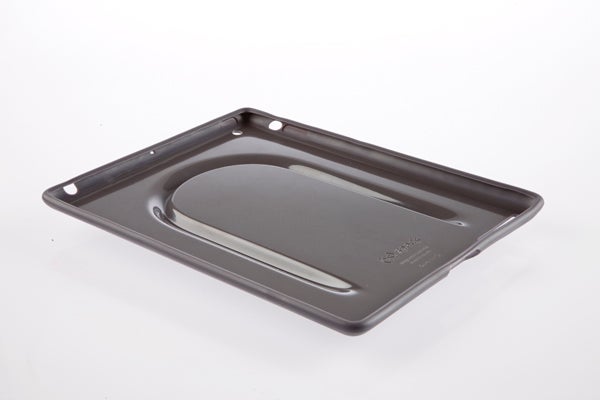 The back panel is hard plastic, to give the handle a strong-enough base to rest upon, but the edges are rubber. There’s just a subtle differentiation in colour and finish between the two – the plastic glossy, the rubber matt – helping to make sure that the oversized handle is the only part of the case that might be seen as a little silly. It’s rather ingenious, although we’re not entirely sure that Speck’s claims of the hard plastic offering better protection than a thick layer of silicone would necessarily hold out in real-world testing.

The case weighs 212g. It’s a significant figure given it’s a third the weight of an iPad 2, but is less than expected given the size and strength of the handle on its back. The case also provides all the standard cutaways for on-body controls, ports and speaker outlets. 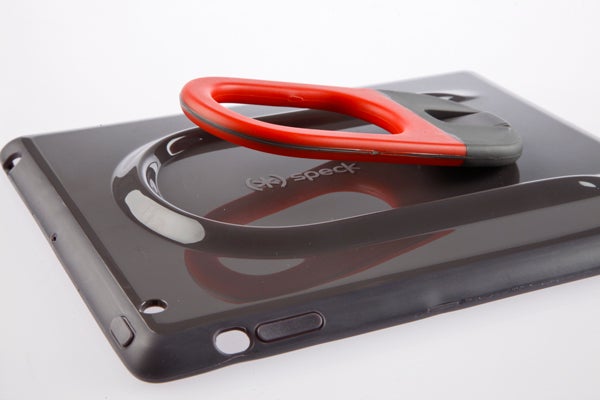 It’s hard to imagine lounge-bound tablet users wanting a case like the Spec Handyshell. Lacking subtlety and selling for a fair chunk of change, this is not a case for everyone. However, it’s also hard to deny that Speck has executed the design very well. The back handle offers greater versatility and strength than a folio stand, making it worth consideration if you view your iPad as a utensil rather than a plaything.

Verdict
The Speck Handyshell iPad 2 case is a tricky one. Most people won’t want something like this, but within the constraints of its design remit it works very well. The handle is strong enough to hold the iPad still at any angle. Ever wanted to hang up your iPad from a hook in the kitchen? This is just-about the only iPad case to consider.