Thanks to it spending many years being a very stylus-focussed and not finger-friendly operating system, Windows Mobile has spawned all manner of more intuitive, easy-to-use front-end interfaces from third parties. One of the most successful of these is MobileShell, made by SPB. Now SPB has turned its attention to another OS that is looking rather long in the tooth, Symbian. With countless touchscreen phones finding themselves hamstrung by this rather clunky operating system, MobileShell could be well worth its not inconsiderable £26.95 asking price.

SPB MobileShell for Symbian has been developed to work with Symbian S60 v5 and upwards. We were shown a demo of it working on a Samsung i8910 HD and for our testing loaded it onto a Nokia 5530 XpressMusic and a Nokia N97. 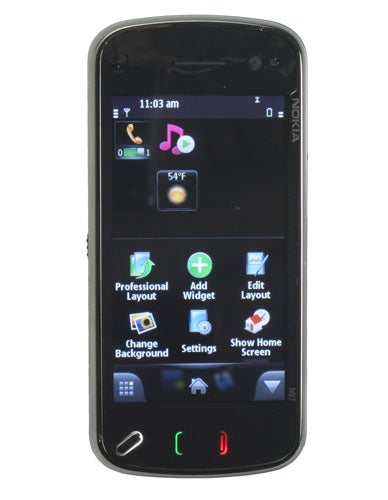 What MobileShell brings to the table is a completely new front-end which, like Android and iPhoneOS, has multiple home screens (up to five in this case) that you can scroll through horizontally. On to these you can arrange a variety of shortcuts and widgets giving you quick access to most of the phone’s key features. In particular the widgets consist of a weather viewer, a digital clock, a calendar, a task viewer, an analogue clock, and a picture viewer while dedicated shortcuts for adjusting the backlight, switching phone profiles, changing wireless settings, accessing the dialler/messages/recent calls/contacts apps are also available. You can also just drop a shortcut to any program onto the desktop though the icons aren’t optimised to fit in with the colour scheme like the dedicated ones. 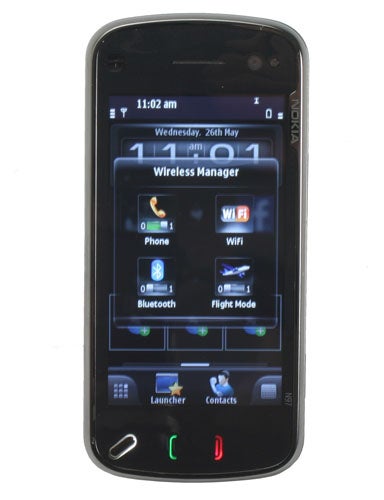 Some of the dedicated shortcuts also open small programs, saving you going into the default Symbian interface to make a few small adjustments. These include: the wireless settings that open up a further set of ‘switches’ enabling you to quickly turn on or off Bluetooth and Wi-Fi or switch to Flight mode; the clock app that brings up a slick interface for adjusting the time and adding alarms; and the brightness app that shows a grid of six brightness levels for you to choose from. All the various shortcuts and widgets can be arranged in whatever way you like and there are two profiles – professional and lifestyle layout – so you can quickly change between having your email and calendar on the homepage, say, to having Facebook and Twitter.

Along the bottom of the screen are four icons that, from left to right, open a 3D carousel, a favourite apps launcher, your contacts, and homescreen settings. The 3D carousel is a classic example of the sorts of interface mistakes made by not just these small software developers but the very makers of these phones. It presents you with (surprise, surprise) a carousel of the home screens and lets you spin them around to get to the one you want. It’s of no benefit whatsoever.


Thankfully you can swap this to a grid layout instead – alike to the Leap interface on the HTC Desire – which is slightly more useful. As for the homescreen settings, you can change the number of home screens (with settings for both ‘professional’ and ‘lifestyle’ layouts) and choose whether the contacts and app launcher shortcuts show you ‘favourites’ or ‘last used,’ among other options. 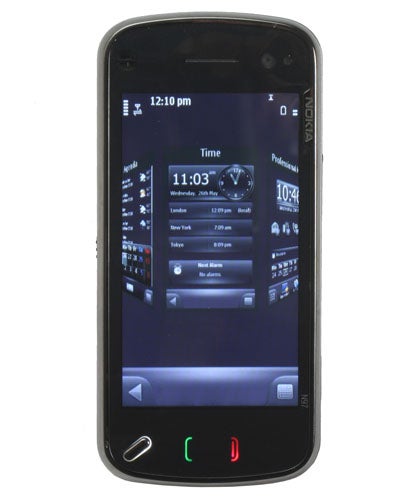 In essence, MobileShell is just a fancy looking app launcher. Go beyond the homescreen and everything is standard Symbian with all the positives and negatives that entails. Nevertheless, it has a much nicer look and feel than the standard homescreen of Symbian and in having multiple homescreens adds a significant amount of functionality as well. You can switch to the standard homepage at the touch of a button, or have MobileShell only launch when you want so installing it isn’t a be all and end all decision. 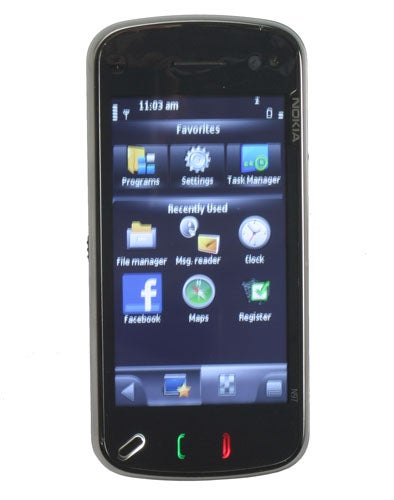 Both our 5530 XpressMusic and the N97 test phones ran MobileShell comfortably, providing a fast and smooth experience. The fluidity of movement when panning the homescreens left and right puts the standard Symbian interface to shame. Functionally it also provides a huge boost to both these handsets as neither has a multifaceted desktop arrangement. In contrast, phones like the Samsung i8910 HD and Sony Ericsson Vivaz do have some sort of multi-desktop arrangement so the case for MobileShell is less clear cut. However, in our experience the homescreens of these devices aren’t very easy to use and aren’t as configurable as MobileShell so you’d still benefit. 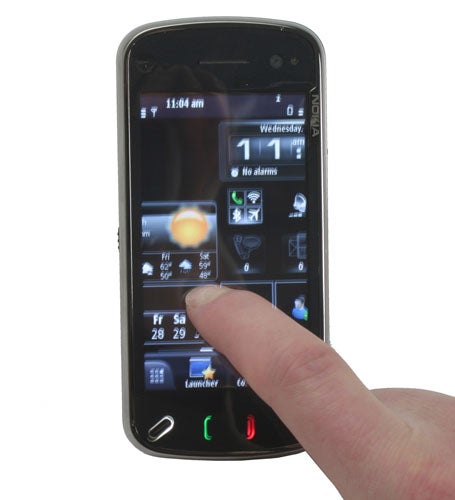 If you’ve invested in a top-end touchscreen Symbian-based handset and find its interface frustrating, you’ll appreciate the additional usability that MobileShell provides. That said, £26.95 is definitely too expensive to our minds. Considering you can buy a full fledged sat-nav app for that much, spending that amount on software which doesn’t add anything fundamental to the device is stretching it. Were the price to get closer to £10 we’d outright recommend this software but as it stands we’d be inclined to put the money towards a handset upgrade in the future.


SPB’s MobileShell for Symbian provides a nice upgrade to the dour touch-screen interface that Symbian provides. Its multi-faceted desktop arrangement puts far more functionality in easy reach than standard Symbian and it looks significantly slicker as well. It is however too expensive at £26.95 and we’d prefer to see this drop to nearer £10 before it’s an outright recommendation.