The greatest strength of Space Marine is that it does such a great job of bringing the Warhammer 40,000 universe to life. Like Games Workshop’s dark future RPG and wargames, it presents a brutal, dystopian and ludicrously violent sci-fi world, in which a quasi-fascist Imperium is all that stands between humanity and the forces of chaos and disorder, and in which the heroes are hulking bruisers in gigantic suits of power armour, literally battering their way through endless hordes of green-skinned orks intent on tearing them to pieces. It’s a universe that was originally crafted with wit and real attention to detail, intentionally grim but also marked by a vein of twisted humour. Without it, Space Marine would be an above-average third-person action game, but little more. With it, it’s hugely enjoyable, and we should all heap kudos at the feet of the team at Relic Entertainment for making it so. 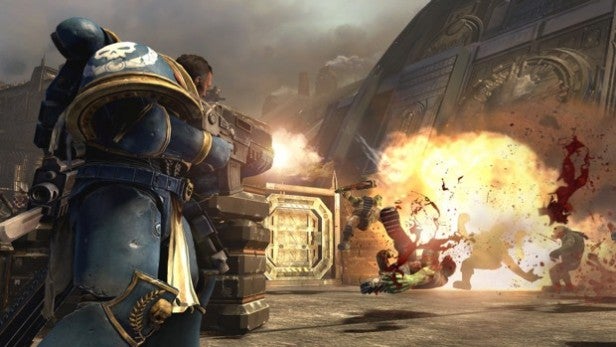 Space Marine puts you in the thumping, power-armoured boots of Captain Titus of the Ultramarine chapter of the Imperium’s finest, as he leads an assault on an ork invasion force in the process of attacking an Imperial factory world. Ostensibly, the concern is that gigantic Imperial Titans (huge piloted battle robots, for those not in the know) will fall into Ork hands, but as you play it becomes apparent that something larger and more dangerous is afoot. What really matters, however, is that this entails Titus going up against thousands of orks with the assistance of some of the most barbaric futuristic weaponry ever conceived. 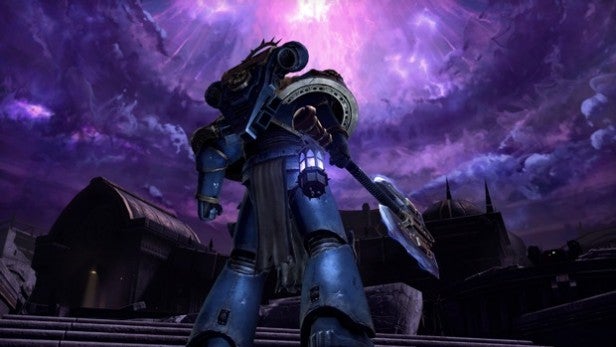 Now, screenshots and early reports might point to an uninspired Gears of War clone, but actually that’s only part of the story. In fact, Space Marine turns out to be a weird hybrid of Gears of War and God of War, where melee combat is every bit as important as blasting, and where there’s none of that wussy cowering in cover that those big-girls-blouses in the Gears series get up to. Generally the game works like this: Titus and any supporting officers wander into a new area. Within seconds, the area is swarming with charging orks and peppered with gunners and snipers, and you take out the former with your current melee weapon while blasting the latter with your bolter, laser or plasma gun of choice. The trigger buttons handle shooting, Gears of War-style, while the X, Y and B buttons handle basic attacks, stun attacks and finishing moves. After a few minutes the orks will be nothing more than a smear on the scenery, your armour will be covered  in gore, and you stomp off to the next area and repeat. 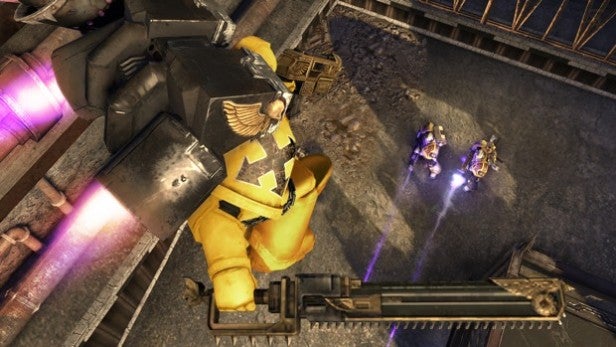 This might sound dull, but in practice it’s not. First of all, Space Marine gets the flow of its melee combat right. Whether you’re wielding a chainsword, a power-axe or a mighty, skull-crushing hammer, hacking your way through the orks feels good, and the game can pack impressive numbers of the green-skinned thugs on-screen at any time. There’s also a level of strategy involved. Ignore the orks with guns (or worse, rocket launchers) and they’ll pick you off while you’re managing the hordes. Leave the shock troops to focus on the snipers, and you risk being overwhelmed.

What’s more, while your armour is tough and recharges, you’re not invulnerable, and there are only two ways to rebuild your health. One is Fury mode, where you can fill up a guage (by killing orks, naturally) and then use the energy to unleash your inner bezerker, smacking your foes for extra damage while recharging your health meter. The other is to stun opponents and use finishing moves, which gives your health a smaller boost. The danger here is that. while you’re pulling off these moves in slow-mo you can still be damaged by attacks, so you can’t just pull of stun/finishing move after stun/finishing move with impunity. 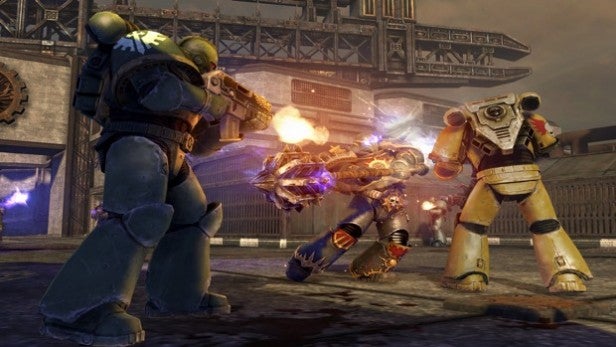 Now, Space Marine is fun, but it’s also – as you might have guessed – repetitive. While there are occasional set-pieces and some superb sequences where you get to hop around on a jet-pack and smash your way into the ork hordes from above, the vast majority of the game consists of bashing one ork wave, then the next. The main things that distinguish one skirmish from the next are the weapons you’re using and the types of orks you’re fighting. The graphics are good and some of the scenery in later stages impresses, but there’s a lot of time where you’re wandering through generic corridors, industrial facilities and plazas. In short, if you’re looking for the stand-out sections of a Gears of War then you’re not going to find them here, and it doesn’t exactly help that orks are practically the only enemy you’ll see for the majority of the game.

This isn’t a deal-breaker. Play Space Marine in, say, ninety-minute chunks and you won’t get bored, and the sheer amount of on-screen mayhem will keep you entertained. It does mean, however, that it doesn’t feel like a fully-realised effort. It’s good, where it could have been great. To some extent, this feeling also affects the multiplayer. It’s just as bombastic and just as much fun as the single-player campaign, with a great selection of weapon loadouts and some really smart ideas. For example, you level up and unlock new weapons and classes as you go, but even beginners are given a leg-up by the option to copy the weapons and perks of whomever it was that last killed you. All the same, with just two simple game types and fairly uninventive maps, it hasn’t quite got the class of the online world’s big hitters. That said, we’re keen to see the Horde-style co-op mode, which will be made available as a free download next month. 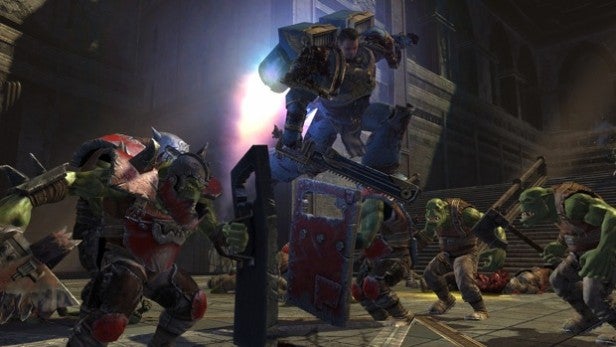 These issues drag the overall score down, but tor Warhammer 40,000 fans – even those who haven’t picked up a miniature in decades – such complaints are by the by. The fact is that Space Marine gets the tone and the core action so right that it’s hard to wipe a bloodthirsty grimace from your face. Even the English voice talent, both for the thuggish orks and the more measured Marines is perfect, the slightly wooden animation made up for by fine performances from a cast led by Mark Strong. It turns out that respect for a license can make a decent game feel more than that, and here Space Marine rarely puts a foot wrong.

Verdict
There’s little truly original about Space Marine, and pacing and repetition hold it back, but it’s hard to deny the appeal of smashing orks to bloody chunks as an armoured walking tank. Add one – heck, two – to the score if you’re a fan.