Generally speaking, I’m not a huge fan of retro remakes. I’ve enjoyed the odd spot of Galaxians or Defender in an emulator, but in most cases giving an old classic a modern makeover only makes the limitations of the gameplay more apparent. While there’s no doubt that blasting wave after wave of aliens maintains a strong, primitive appeal, there are good reasons why most of us would prefer to spend our time playing Guitar Hero, Call of Duty 4 or Race Driver: GRID instead of, say, Phoenix, Bezerk or Pole Position.


This might explain why Space Invaders Extreme has spent the last couple of weeks loitering on my desk, waiting for me to pick it up and give it a chance. I’m glad I did. This is one of those rare retro remakes that takes the original game and rebuilds it, brick by brick, into a new and wonderful form. It still feels like Space Invaders. It still has all the iconic visual elements of Space Invaders. Yet, all the same, it’s a more varied, more exciting, and more deeply engaging game. The fact that it comes from Square-Enix, the home of Final Fantasy, is slightly odd, but who cares when the results are so cracking? 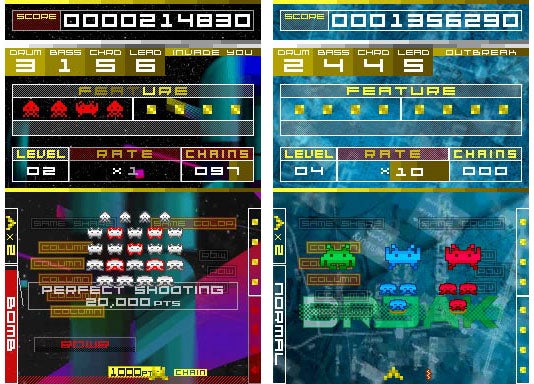 It’s not hard to see where the aesthetics have been pinched from. While waves of blocky invaders still troop down from the top of the screen in time-honoured fashion, the psychedelic backgrounds and bright neon colours instantly bring to mind Geometry Wars, Tempest 2000 and the Japanese ‘schmups’ of Kenta Cho. The sound effects are designed to key in with the pounding electronic soundtrack, creating a single, interactive soundscape just like Rez, Everyday Shooter or Lumines. It’s still Space Invaders, yet it looks and sounds effortlessly cool and modern. Plug in your headphones, head somewhere where you can block out the rest of the world, and enjoy.


And they don’t call it Space Invaders Extreme for nothing. You knew where you were with the old invaders. They slowly waddled in neat rows from left to right, getting faster as they neared the ground. Occasionally a high-scoring mothership made its stately way across the screen, and all you had to worry about was popping out from beneath your protective bunkers to shoot the aliens with your slow-moving bullets while dodging theirs. Space Invaders was never as tough on the reflexes as Defender or Galaxians. The pace ratcheted up as the waves went by, but it was only in the last few seconds, as the final survivors made their last-ditch, high-speed assault on the ground, that any sense of panic set in. The invaders were, it must be said, a little dozy and predictable.

Not these guys. While the 2008 invaders still prefer holding rank and maintaining a steady formation to Galaxian-style kamikaze attacks, they’re now inclined towards holding a variety of patterns. Some explode on bullet impact, others occasionally take a sneaky dive down towards the ground. You get invaders equipped with shields, or larger invaders that take extra hits or dispense fiendish, unblockable death rays. Even the mothership – formerly defenceless – is getting in on the act with a destructive beam of its own. The great thing about all this is that you no longer know what’s coming from wave to wave, meaning you have to constantly mix up your tactics. In the end, Space Invaders was a game you could play with a slightly dull, scientific precision. Space Invaders Extreme asks you to adjust your approach, react and improvise. By the time you hit the third series of waves, you’re really being kept on your toes. 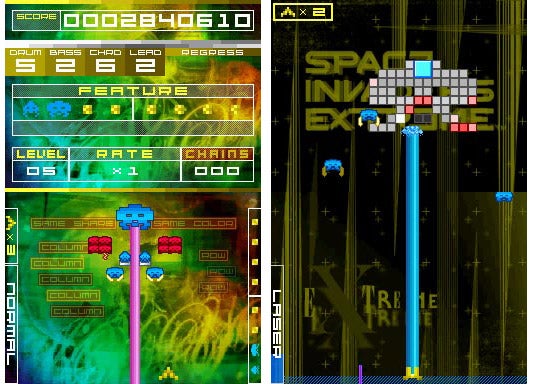 Luckily, your armoury has grown to match the revamped alien tactics. When shot, certain invaders drop little square power-ups, colour coded to show that they’ll change your slow, single bullet into an explosive missile, an energy beam or multi-shot etc. After years of repelling the Invader armada with inadequate weaponry, it’s a delight to take the beam weapon to them, instantly incinerating column after column of the blocky, arm-waggling varmints. Combine the missile with explosive aliens and it’s possible to dispense with a whole wave in a matter of seconds. It’s fast, it’s fun, it’s furious; Space Invaders Extreme has got the constant forward momentum of a hungry shark.


Of course, even sharks like a varied diet. To mix things up even further, the game throws in bonus rounds where you’re given a specific target (shoot 12 red aliens, destroy five patterns) and a time limit. Complete your objective and you’re rewarded with a fever mode, where your points ratchet skywards with every mothership shot down. What’s more, each sequence of waves, or level, finishes with a boss battle. Normally I’d be muttering about heresy at this point, but the fact is that the boss battles are pretty good, hitting you with huge invaders that form and reform in different patterns with different groups of defenders. As always, it’s a question of spotting and taking advantage of the weak points. You may get through the first couple with mindless blasting, but after that point you might – shock – actually have to think!

In terms of difficulty level and structure, I think Square-Enix has got the balance spot on. Hardcore, score-attack obsessives get a mode where save points and continues are outlawed and all scores are uploaded via the Nintendo Wi-Fi Connection to a central leaderboard. The rest of us get a more generous arcade mode where the game saves after each boss battle and you can retry the level as much as you like. The result is a game that’s horrendously addictive, but one you can still play in relatively bite-sized chunks. Unlike some other recent retro blasters, nobody is forcing you to play and replay the same stages over and over and over if you don’t want to.


The one weakness is the multiplayer option. Square-Enix gets points for including download play to a DS without a cartridge, plus online play over WFC, but the actual multiplayer offering is a pale shadow of the single-player game. Basically, two players face wave after wave of aliens until one loses all their lives. Shooting the aliens creates a store of grumpy invaders, and blasting a mothership unleashes that store upon your opponent. It’s OK, but a little bit dull, and it really just leaves you champing to get back to the main game. 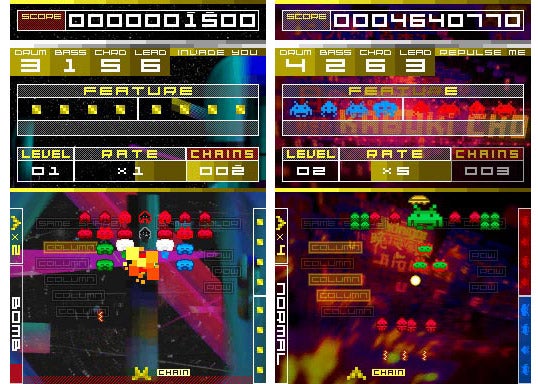 This isn’t the most revolutionary DS game of the year, and I have my doubts about its long-term lifespan, but given the low street price (you can easily get it for less than £15) Space Invaders Extreme is perfect for a quick blast in the sun, a little distraction on holiday or some serious time wasting while you’re travelling. The key test for me – and this applies to any portable game of this ilk – is whether I find myself sneaking goes in when I really should be doing something more important. It’s a test that Space Invaders Extreme passes with flying colours. Hours have been mislaid in the bathroom, or in my home office while I was ‘just checking mail’ and in the garden when I was supposed to be watering the tomatoes. That might not be good for productivity or family relations, but – damn it – it’s good for the soul.


A storming retro reworking that actually works! Space Invaders isn’t the deepest or most innovative DS game of the moment, but it looks good, sounds great and proves horribly addictive.