The original PC version of Deathwing had two points in its favour: it did rock-solid service for fans of Games Workshop’s grimdark sci-fi universe, and it wasn’t the worst Warhammer 40K game to come out in 2016 (stand up Warhammer 40,000: Eternal Crusade). On every other front it was a disappointment. A dreary mess of an FPS scarred by bad level design and woeful AI, delivering little more than endless hours of repetitive blasting.

This new Enhanced Edition, the game’s debut on PS4, is an attempt to draw a line under that old version and remind everyone that the development team at Streum has – to its credit – spent the last 18 months improving the game.

Not an awful lot has happened to the single-player campaign, but the Left 4 Dead-style multiplayer mode gets a new progression system with weapons, armour and customisation unlocks, a new class – the Chaplain – to play as, and new weapons and enemy types.

Solo players don’t miss out entirely, with a series of procedurally generated special missions that turn the main campaign’s environments into shorter challenge levels. Meanwhile, a whole ton of bugs and glitches have been firmly ironed out.

Is this enough to transform Deathwing into a half-decent Warhammer 40K game? Well, there’s good news and bad.

On the bad news front, the main campaign doesn’t play much better than it did 18 months ago. It’s an odd squad-based, first-person shooter where, as a Librarian for one of the fiercest regiments of the Dark Angels space marine chapter, you lead a team of three into the heart of a derelict space hulk.

Here lies an ancient Dark Angels ship containing some dark secrets that would be better left undiscovered. It’s a shame you’re going to find them out. 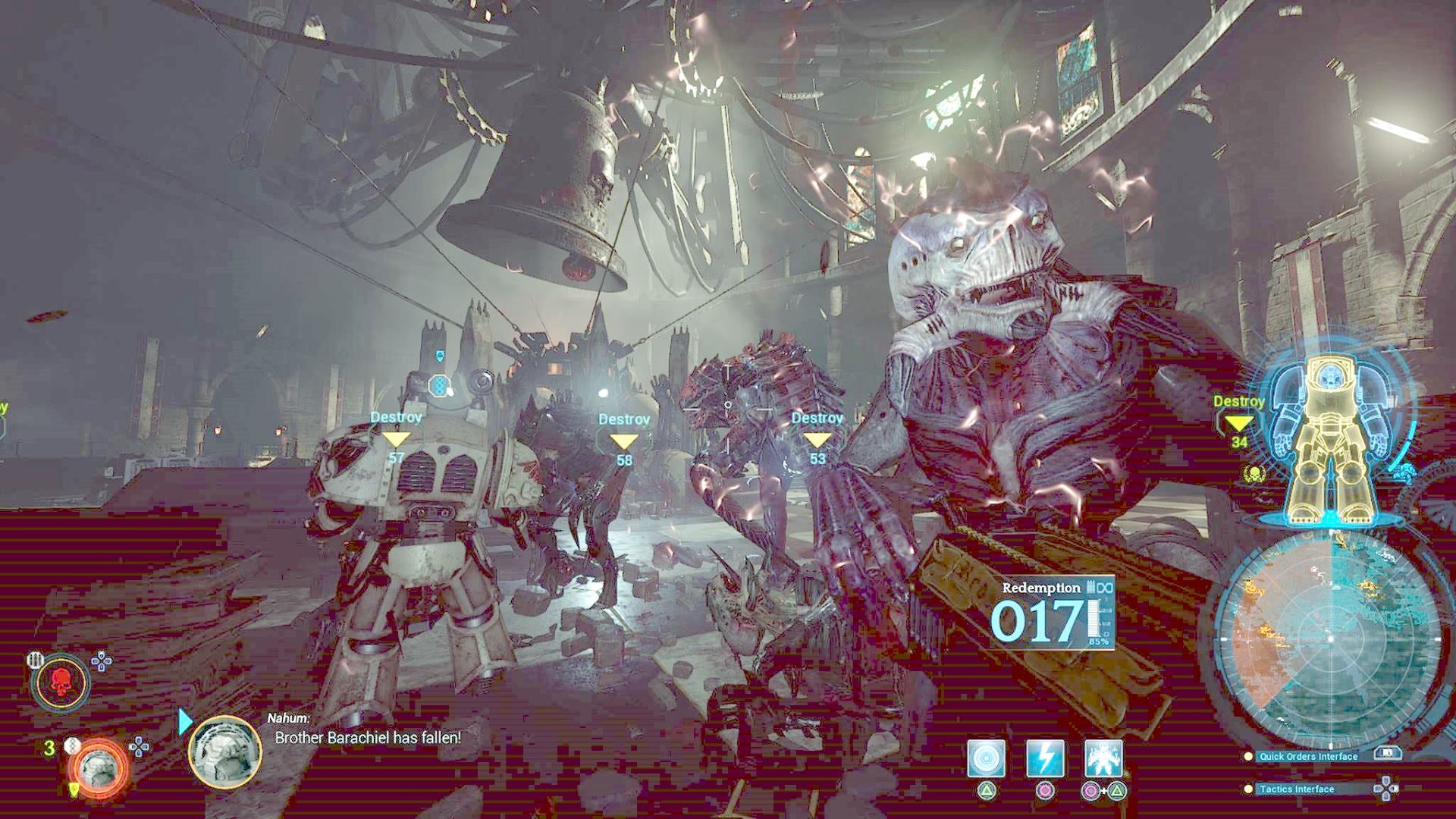 Each mission is a lengthy, heavily armoured plod through winding, poorly-lit corridors and dark industrial chambers, brightened only by the odd grand space of gothic sci-fi architecture.

As you and your team clonk and clank along in your Terminator armour, you’ll be swarmed by hordes of the fiendish genestealers, streaming out through every outlet and down from every surface, often straight into the fire of your overheating guns.

You have one ranged weapon and one melee weapon with which to hold them at bay, plus a small selection of psionic attacks and defences to deploy. Good luck when there’s a tidal wave of the bastards.

Meanwhile, your crew can alternate between following you around and blasting and lending their own unique skills to the fray, including – in your Apothecary’s case – a little healing. You have a quick command tool to make them follow, defend or do their stuff, which could be handy given their often suicidal tendencies.

There are some nice moments and some decent stabs at storytelling, but overall this is a great example of how to turn an imaginative license into a less than imaginative game.

Your movement is painfully slow – a function of trudging around in all that armour – and aiming isn’t a whole lot snappier. Your xenomorph foes are neither smart nor scary, seeming to spend most of their time either racing towards you en-masse or standing in the middle of a corridor taking pot shots. They can be deadly, yes, but ingenious or convincing? Nope. You have some interesting heavy-duty guns to wield and some pretty iconic Warhammer 40K melee weapons, yet the firefights are devoid of tension and the close-quarters combat slow and unwieldy.

The enemy AI has nothing smarter to do than spam you, and what starts off feeling slightly tense soon grows workmanlike and boring. As for your guys, they have a nasty habit of dawdling in the line of automated turret fire or wandering cluelessly while the genestealers wail away on them.

Luckily, if one of your team dies then you can summon a portal and head back to the mothership to revive them – a habit that also triggers the game’s auto-save function. You can do this up to three times a mission.

The game does a great job of capturing the dark, industrial sci-fi look and feel of the classic Warhammer 40K universe, but a lot of the same settings and monsters goes an awful long way, and – despite some enhancements to the volumetric lighting – Deathwing still suffers from last-generation level visuals.

There’s a lot of good fan service here, buoyed by solid writing and mostly decent voicework. However, if you’re not a 40K fan then this won’t turn you into one. Basically, Deathwing isn’t a whole lot of fun.

Multiplayer was the saving grace of the original release and it’s still the best way to play Deathwing now. Four of you – either friends or randoms – can quickly jump into a game and tackle any of the campaign’s levels that the host has conquered. With all of you working together to blast the genestealers, the setup makes a lot more sense.

There’s no need to contend with the poor space marine AI or struggle with the ropey command interface; you can just focus on blasting the genestealers and fighting as a team. None of the classes feel weak in combat, but each has strengths that can be used to push the crusade forward. 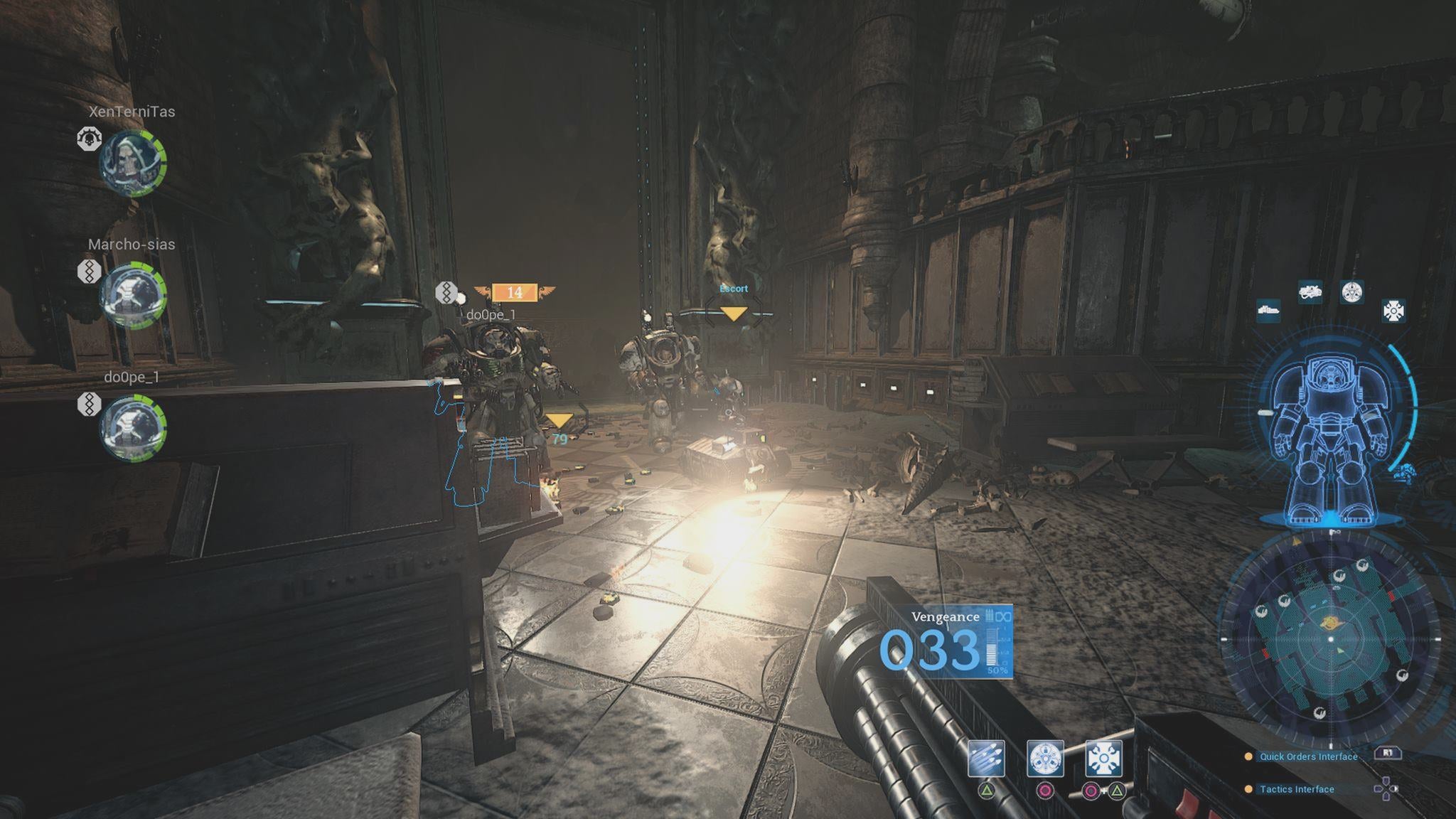 There have been moments playing the Enhanced Edition where I realised I was actually having fun. Get together with a fast-moving, tight-knit unit and the action seems to pick up, as the genestealers swarm in from every side and you’re covering each other’s backs just to survive.

The new progression system also helps. Level up and you develop new capabilities while also earning points that you can spend on tweaked weapons, perks and cosmetic customisations. In the 40K world this means spikes, skulls, gruesome augmentations, bayonets and other grimdark stuff. When the action starts to lose your interest, the lure of new kit just about maintains it.

The package is also improved by the new special missions, partly because your objectives don’t tend to be so tiresome or strung out, and because the random enemy placement isn’t any worse than what we had in the original missions.

None of this means that I’m going to recommend the Enhanced Edition to anyone who isn’t already a dyed-in-the-wool Warhammer 40K fan. Sure, it’s an improvement on the original, but compare it to nearly any co-op friendly FPS of the last five years and it still falls short.

It all comes down to feel and pacing: the combat feels slow and creaky; the AI isn’t interesting to fight; weapons lack impact and excitement; the campaign missions are long and monotonous grinds.

And while it picks up with the addition of more players, the Vermintide games, Killing Floor 2, Left 4 Dead do a better job of orchestrating the action and packing in moments of tension and release. Hell, Call of Duty: Zombies does it better. You’d have more fun in a Destiny 2 strike.

Space Hulk: Deathwing – Enhanced Edition is an improvement on the original version, but still nothing more than a semi-decent co-op shooter chained to a ditchwater dull campaign.

The developers clearly know and love the 40K universe, and there’s enough here to please those who have played the tabletop games and read the novels. If you’re not already a fan, however, there are many better co-op FPS games you could play.