For those of us who’ve been playing computer and console games since the eighties, Jeff Minter is a legend. Anyone who cut their gaming teeth on a Commodore 64 will have put in serious hours on the likes of Gridrunner, Attack of the Mutant Camels and Revenge of the Mutant Camels, and even those of us of the Spectrum persuasion will have come across one or more Llamasoft games. Throughout the years, right up until Tempest 2000 on the ill-fated Atari Jaguar, Minter has stuck to certain themes: fast-paced arcade gameplay in the style of the pioneering shoot-em-ups of Williams and Atari dressed liberally with quirky humour and characterised by a peculiar obsession with llamas, sheep and other hairy mammals. Since working on his early light-synthesizer, Trip-A-Tron, his games have also been known for their psychedelic visuals. This in turn led to Minter’s work on the trippy visualizations built into the Xbox 360 media player. 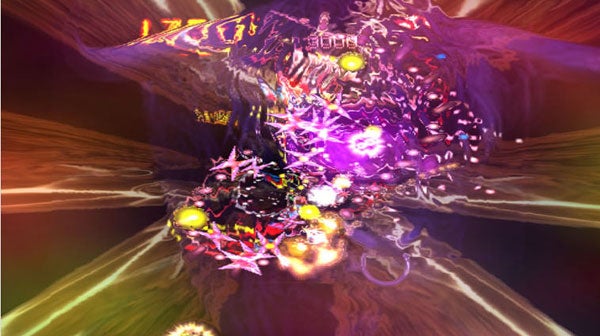 This isn’t just a quick history lesson. All of this has a bearing on Space Giraffe, Minter’s Xbox Live Arcade debut. First, while the game’s instructions are unequivocal in stating that Space Giraffe is NOT Tempest, it does have a certain amount in common with the Atari classic. You control one abstract vector shape – the Giraffe – which shifts left and right along the edge of a tube or chute-like 3D playing field. Other abstract shapes move along the tube’s grid lines towards you, and you unleash a constant stream of bullets at them to stem off a catastrophic collision. We’ll get to why this is NOT Tempest later. Secondly, Space Giraffe still displays Minter’s offbeat, surreal and distinctly British sense of humour, and – as you might be able to tell from the name – it is packed with references to Llamas, Sheep and other hairy ruminants. 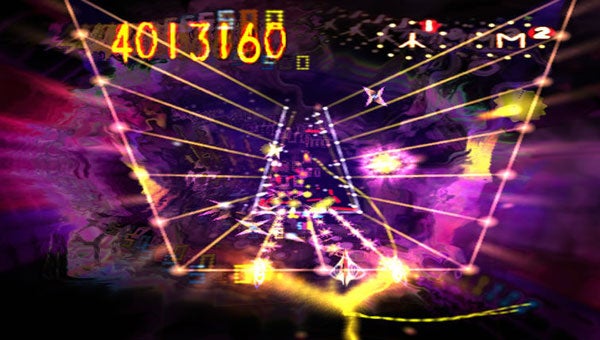 Finally, to say that Space Giraffe is psychedelic is a bit like suggesting that, say, Pete Doherty has dabbled with drugs on occasion or that the Beckhams are mildly interested in publicity. It’s blindingly, aggressively, headache-inducingly psychedelic. If Tempest 2000 was Tempest on acid, this is Tempest 2000 on the sort of psychotropic substances that even the most hardened raver – or Pete Doherty – might think twice about touching. Every shape and line is covered in a vivid, neon glow, while waves of glowing plasma and odd textures bask in the constantly moving background. Every now and then an image might flash up, almost subliminally, and as you move and shoot, explosions and energy pulses will dazzle your vision for a second. There are times when weird post-processing displacement or blur effects are used just to give your eyeballs a hard time. In the meantime, the soundtrack blasts out trance instrumentals as a multitude of oddball sound effects splurt out over the top. On a big, high-definition screen and with a decent set of speakers, there’s a small risk that the whole Space Giraffe experience might temporarily transform you into a dribbling, slack-jawed buffoon. 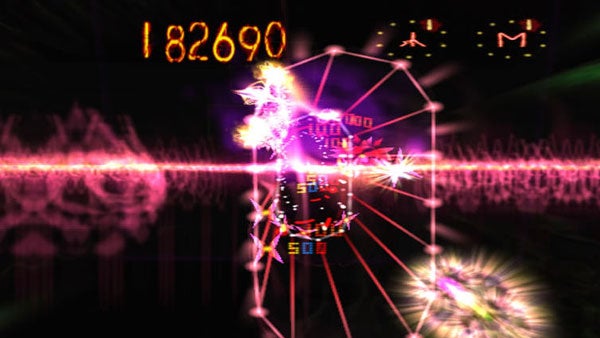 I suspect this may be the point, as Space Giraffe is also one of those games where you have to be focussed and ‘in the zone’ to get much out of it. It’s one of the few shoot-em-ups I’ve ever played that requires a tutorial, and – trust me – without it you’re doomed. It might look like Tempest, but Space Giraffe requires you to do a little more than simply cycle left and right and shoot. After all, you can do so much more. You can aim your bullet stream left and right away from the perpendicular axis using the right analogue stick. You can jump momentarily away from the edge using the right trigger, enabling you to avoid and tackle any enemies that have reached and populated the edge. Moving, shooting enemies and jumping also lights up a chunk of the tube, and as long as a sizable region is powered-up, you can also shunt enemies attached to the edge right off it, killing them and earning yourself big bonus points. These additions aren’t just elaborations, they’re essential skills and part and parcel of the game. 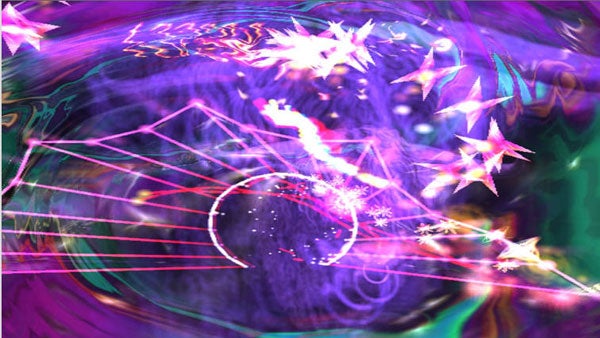 To add another layer of complexity, not all enemies are the same. Some just trundle towards you then attach themselves to the edge, but others fire their own bullets back at you or grow along the grid lines and prove fatal should they collide with you at the edge. Others still roll towards you and need to be driven back by a constant hail of bullets, while another breed needs multiple hits before expiring. This makes things tricky. Thanks to the shunt move, colliding is usually a good thing. However, when certain enemies are in your path, it can be fatal. Knowing when it’s safe to shunt or wise to jump is a skill you only develop with experience. 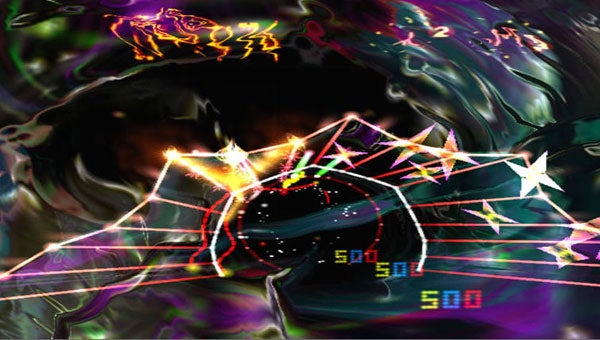 Frankly, were the visuals toned down this would be an awful lot to take in, particularly at the game’s relentless pace. Most shoot-em-ups need fast reactions and a small degree of strategy, but Space Giraffe demands a working knowledge of its rules, a recognition of the enemy forces in play and – above all else – total concentration. It doesn’t help that, on some levels, the left and right edges of the playing field join up to form a tube, and that while you’re cycling left and right around it your movement isn’t necessarily tied to your viewpoint, but to your momentum. In other words, when you’ve looped around to the top of the tube, you may need to shift the stick right to move left, or visa versa. What’s more, completing levels isn’t actually the major part of the appeal. In Space Giraffe, you’re always working for that next big high-score, with each end-of-level status screen goading you on by rating your performance. Nobody wants to be ‘Meh’, ‘Bland’ or ‘Unambitious’, but the only way to avoid these epithets is by taking risks, acting boldly and making heavy use of the jump and shunt moves. Your prize? A higher placing on the online leaderboard. 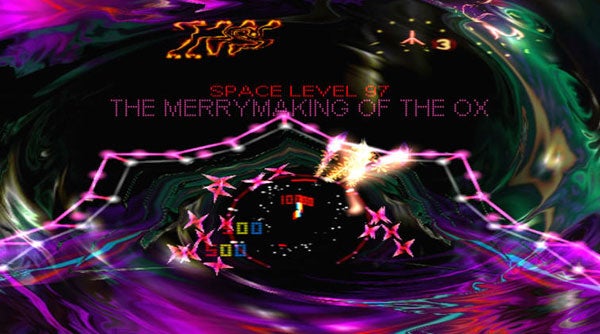 But remember – Space Giraffe doesn’t do ‘toned down.’ This is the most divisive point about the game. With so much going on onscreen at any time, and only about a half of it directly relevant to the actual gameplay, it’s frequently impossible to see everything you need to and make the right, rapid decisions accordingly. For a long time, you’ll find yourself flying blindly into a bullet you never saw coming, shunting when you should be evading and dying without a clue what exactly just went wrong. If you’re the sort of player who gets frustrated easily, or who hates it when a game does not play fair, then Space Giraffe might just drive you up the wall. 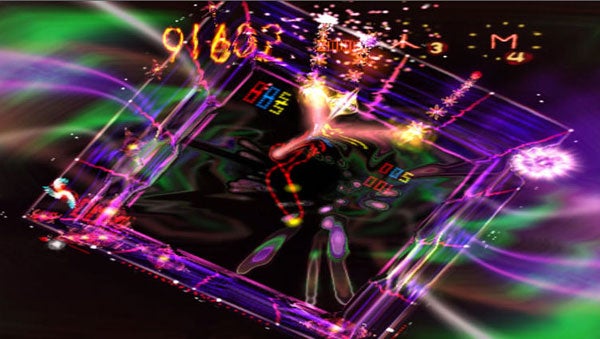 If, however, you like a good, gritty, old-school arcade challenge, then you can and will get used to its quirks. I’m not sure exactly when or how it happens, but after a few hours of play you find yourself getting used to the sudden gaps of information, and you start making use of audio cues and good, old-fashioned intuition to keep you out of trouble. Your sense of the game seems to get a little richer, a little deeper, and the level that has had you stumped for half an hour suddenly seems just about do-able. The feeling might not last, and I’ve found that any break from the game seems to send you right back, if not to square one, then at least to square 2, 3 or 4, but you do get better the more you play. And while the likes of Defender and Tempest never gave you the kind of visual overload Space Giraffe does, wasn’t that the case with them as well? 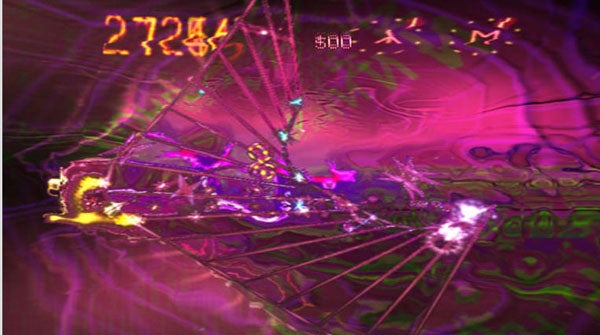 All the same, this is one of those ‘marmite moment’ games. Those looking for another Mutant Storm or Geometry Wars will likely go away disappointed. Like them, Space Giraffe is a defiantly retro, old-school shooter, but it isn’t nearly as accessible or instantly addictive. It may take an hour or two before you get it, and I suspect I still only half understand it. Yet there are going to be people out there who will get it and, more to the point, love it. In fact, there will be people out there who will want to sacrifice nearly every spare waking moment to it. And this is just where the benefits of Xbox Live Arcade come in. If any of this sounds appealing, download the Space Giraffe demo and give it a go. Don’t just try it and dismiss it; give it a little time and space to work its magic. You might just find that one of those people is you.


Classic Minter and more than just a retro-psychedelic curiosity. Space Giraffe may be too trippy and complex for the mainstream, and sometimes too over-powering for its own good, but that doesn’t mean it won’t find and deserve a sizable following of fans.