Introduction
SoundMagic is a company that has clawed its way into the consciousness of headphone fans by producing affordable earphones that sound a lot better than their modest prices would suggest. However, the Chinese company is spreading its wings with the SoundMagic HP100s lining up as the company’s first full-size over-ear headphones. What’s more it has managed to come up with something pretty special.

Design
However, as usual SoundMagic doesn’t make an auspicious entrance. Making the right stylistic choices has never been a particular forte of the company, and there are a few complaints with the SoundMagic HP100s that we want to get over with right away. 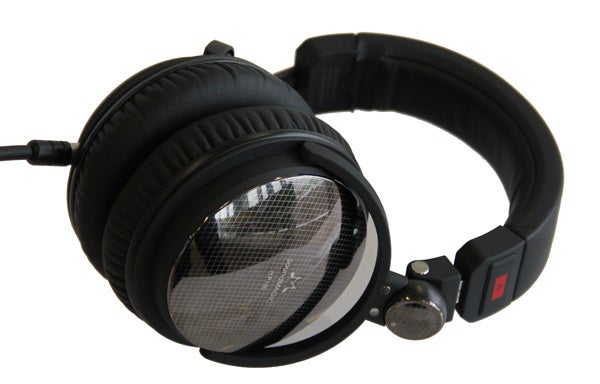 The SoundMagic HP100s use shiny curved circles with a texture of criss-cross lines to cover the ear cups, and red/blue signs to let you know which side of the headphone is which. These are purely aesthetic parts of the headphones, but both are stylistic misses in our book. Full-sized closed headphones rarely look cool, but the HP100 go the extra mile, and end up looking a bit naff as a result. 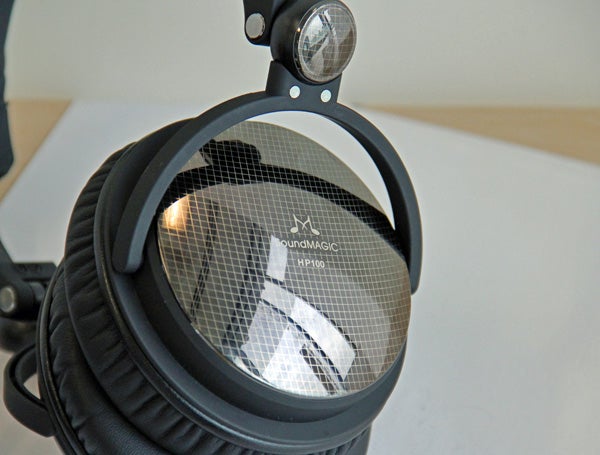 It’s a good job, then, that they make up for it in just about every other area.

They are extremely comfortable, for one. The headband and the cups are generously padded with foam, using different levels of resistance for each to ensure the most comfortable wear. They may not make you look particularly cool, but we found them almost as comfortable as the Bose QuietComfort 15, which are some of the most comfy closed headphones in existence.

The SoundMagic HP100 heat up your ears a bit less than Bose’s pairs too, partly because the giant cups leave more room for your ears and partly because of the 2-part style of the pads. There’s a strip of fabric on the inside of each, so your earlobes rest against something a lot less sticky than leather. They’re a delight to have on, and good weight distribution means you should be able to wear them all day without any discomfort. 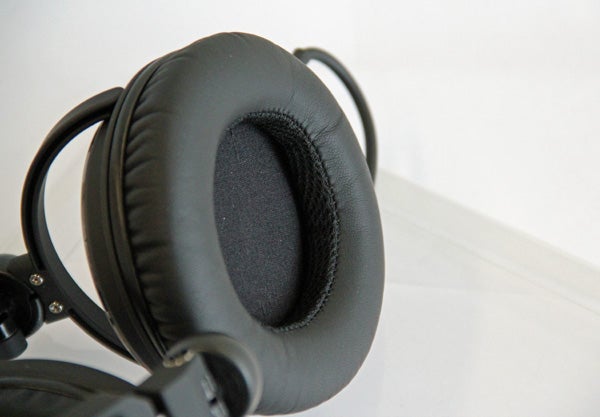 Accessories
The SoundMagic HP100s are also very portable for such a large set of audio suppliers. There’s a ratcheted pivot at the point where the ear cup meets the headband, letting the cups twist right up into the band. They do occasionally start folding in on themselves when you don’t want them too, but it’s not a big problem. 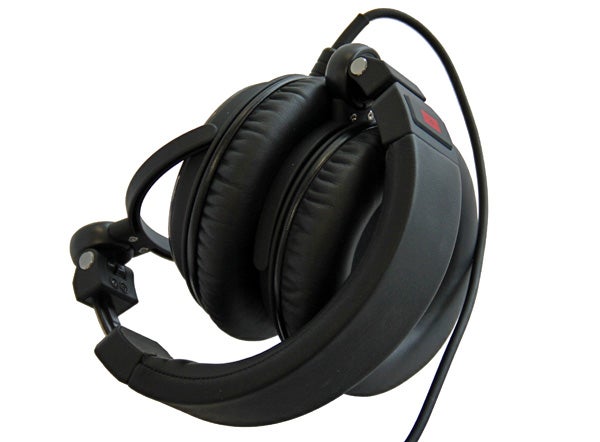 The SoundMagic HP100 headphones come with an unusually good case too. It’s semi-hard, red on the inside and black on the outside, and comes with a little Velcro-attached sack that holds the 3.5-to-6.3mm jack converter, an airplane converter and – most unusually – a carabiner. 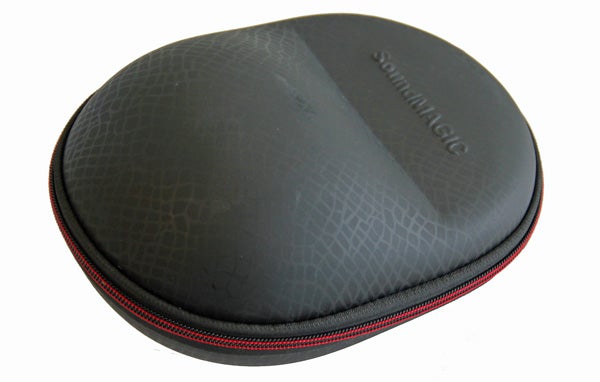 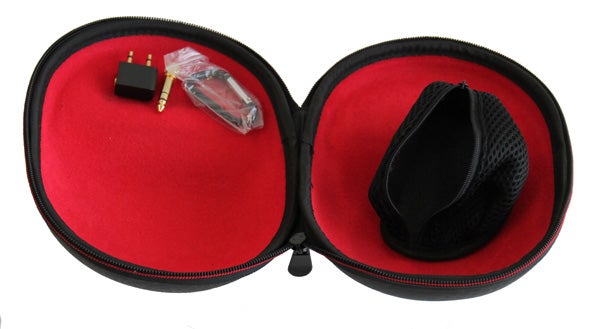 Earning the SoundMagic HP100 more design brownie points, the cable is removable, using a twist-to-lock mechanism and an otherwise-standard 3.5mm stereo jack that plugs into the left earcup. 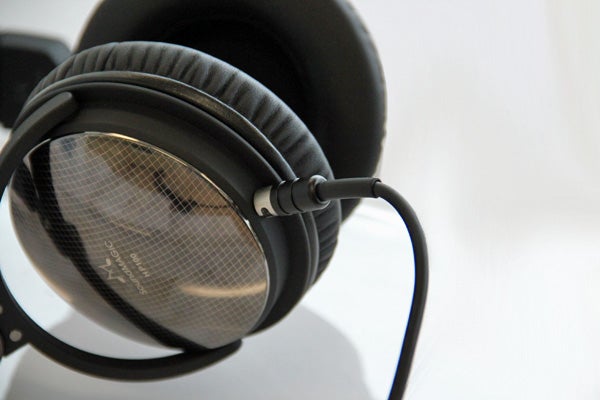 Unlike most headphones that are at least partly aimed at the iPod crowd, these headphones use a coiled cable. It’s 1.2m long, stretching out to 4m. Using such a cable does seem a little off if SoundMagic is aiming at the mainstream audience rather than studio-bound folk as it feels a little heavy when walking about. Ideally we’d prefer to see dual cables – one short one for on-the-go use and a longer one for at-home listening. Admittedly, such generosity is a rarity but the coiled cable does put a slight damper on the otherwise luxurious comfort. 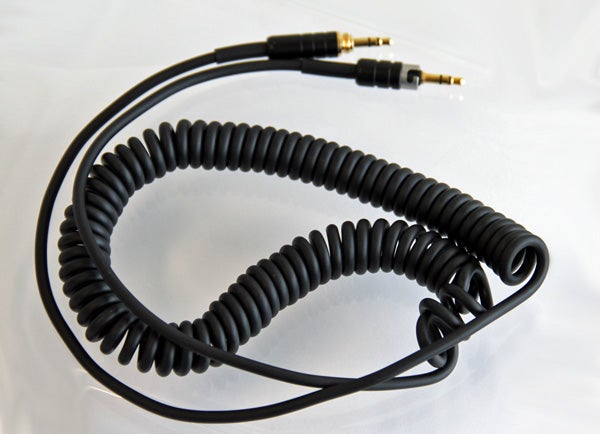 If you can stomach having such large, and not particularly cool-looking, headphones on your noggin, they work very well as a portable pair. The closed design provides well above average noise isolation, coping with the ruckus of a city with relative ease. We’ve used them a good deal on the train and tube, and barely had to up the volume level.

These really feel like headphones that are intended to be able to skip between at-home and outside use. The particularly robust jack sleeve protector is a particular giveaway that the SoundMagic HP100 want to spend some time in the living room too – it’s just a bit to big to slip into pockets innocuously. They’re a lot like the Shure SRH840 in this respect. But does the sound match the big boys?

As a brand we’ve championed in reviews like the SoundMagic E30’s, we were a bit worried about whether the SoundMagic HP100 would match the quality of the company’s in-ear models. Making over-ear headphones is a different game entirely, and the large 53mm driver, folding design and rather loud look suggested they might be brash “DJ” headphones – all bass and no class. Pleasingly, however, they are anything but.

The SoundMagic HP100s are fantastic in a number of ways. These are balanced-sounding headphones that successfully tip-toe the line between an accurate pair and an entertaining one. What’s most impressive is their rendering of detail, which is exceptional. There’s more space and insight at the top-end than the Shure SRH840 – a key rival, and notably detailed cans. 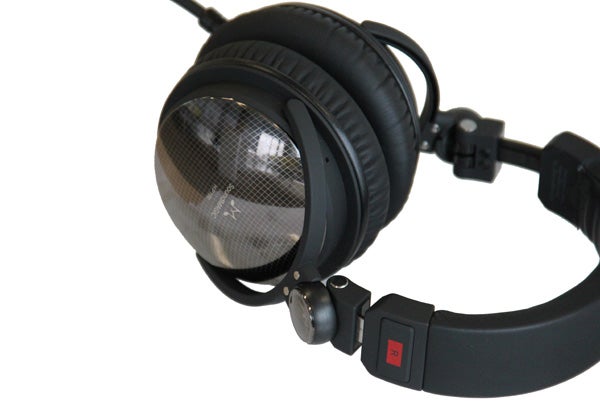 There’s no harshness of sharpness here though, which is always a risk when opting for a slightly bright signature. We’d go as far as to call the treble here utterly delightful, with enough sweetness to nudge the HP100 away from being analytical “studio” headphones, back into the realm of the mainstream.

There’s a smoothness to the sound of the SoundMagic HP100 headphones that makes prolonged listening extremely enjoyable, but it doesn’t rely on warmth as some smooth headphones do. These really aren’t particularly warm, valuing clarity over most other things. If anything, the mids are a little recessed, giving the HP100 signature a sense of a “stepped back”, relaxing sound rather than an up-front and aggressive one. It’s certainly not relaxed enough to become at all dull, though.

This approach to the mid-range also gives the SoundMagic HP100 an airy sound, bolstered by the already larger-than-average (for a closed pair) soundstage. These are among just a few closed sets we’ve been happy to use as an at-home pair – we normally favour a fully-open set when leakage and non-existent sound isolation are no issue.

The only potential issue we can envision is that those after the typical “DJ” sound may be a little disappointed by the bass response, although this too is by no means bad – it’s just well-balanced. It’s subtle and therefore only shows its presence when required. Bass separation is great, and depth is decent, if not quite as notable as other elements of the HP100. 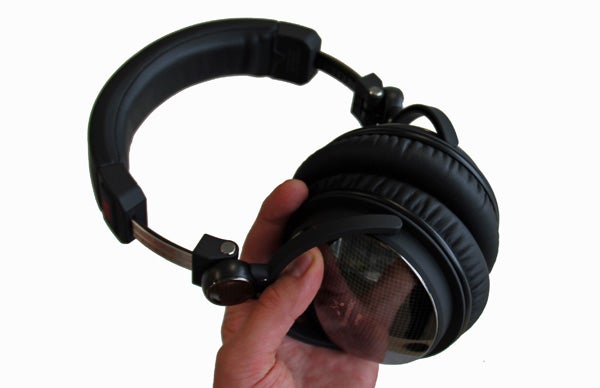 Value
The SoundMagic HP100’s superbly detailed sound only makes us wish the company hadn’t played its usual trick with the design. Comparable headphones from Sennheiser and Shure may tend to look functional and little else, but we’d prefer that over contrived style mis-steps.

However, from a more practical standpoint there’s very little to complain about. Great comfort, a versatile design and sound that pips similarly-priced rivals like the Shure SRH840 and Audio-Technica ATH-M50 make the SoundMagic HP100 a clear candidate for a headphone of the year nomination.

Verdict
SoundMagic has done it again. The HP100 headphones are excellent, highly detailed-sounding headphones that marry the insight of a clinical headphone with an easygoing smoothness of a pair that’s more about enjoyment than monitoring. Add great comfort to the mix and you have a real winning pair of cans. We just wish SoundMagic had classed-up the look a little more.