iPhone docks have proved so popular over the past few years that they now come in all shapes and sizes. Ranging from £20 cheapies to designer units that cost over a grand, all are catered for. The Soundfreaq Sound Step Recharge is one of the most versatile we’ve seen this year. It’s semi-portable, its dock socket can handle an iPhone, iPod Touch or iPad and it boosts its feature diversity miles beyond much of the competition with built-in Bluetooth and an internal rechargeable battery. This dock really can connect to just about anything.

Its design is somewhat unusual too. Where most portable docks opt for the slim and simple look, such as the Bose Soundlink Wireless and Sony RDP-M15iP, the Soundfreaq Sound Step is chunky and blocky. It may not be tied to a power socket, but this isn’t a dock you can sling into a small bag. Simultaneously evoking a Mayan temple and a piece of 80s designer Hi-Fi equipment, its looks won’t please all comers, but at least it doesn’t look blank and boring.

Missing from some rivals, there’s a bung to cover up the iOS dock port on the front too. It’s made of rubber and is ridged like the sides of the dock. We imagine it’s there to convince some non-Apple owners that this is still a sound purchase, but it is first and foremost a gadget for iOS folk.

However, it is much better-equipped than most to deal with Android phones, tablets and other such devices. It’ll happy link to any fully Bluetooth-enabled device, has a 3.5mm auxiliary input for old-fashioned wired hook-ups and there’s even a powered USB on the back to let you charge other devices (or a second iOS unit). This is a rare addition, and something that makes the Sound Step Recharge much more flexible than most other docks at this price. To switch between inputs, you use the touch-sensitive buttons on the sloped front panel. There are little lights on these buttons to give a quick visual indication of whether you’re getting sound through the dock, Bluetooth or auxiliary input. On the other side of this front panel are a handful of volume and playback controls.

On the back panel there’s also a composite video output. It’s not something we imagine many will use – supplying a fairly low-quality signal that won’t do justice to any decent-quality vids you have stored on your iPhone or iPad. But it is that last bit of feature bullet-proofing that ensures only the most pedantic of buyers will have reason to complain about the Sound Step Recharge’s abilities. 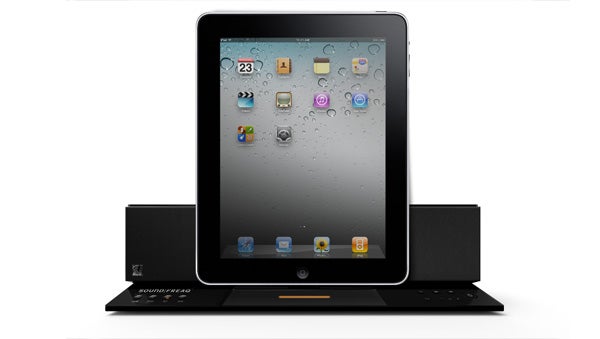 That’s not it, either. There’s a remote control that slots neatly into a recess on the dock’s bottom and Soundfreaq has produced a free iPhone and Android app that lets you easily pipe music over to it using Bluetooth. The interface mimics the style of the buttons on the Sound Step Recharge – nothing special, but you can always sidestep the app completely and hook-up manually if it’s not to your taste.

Bluetooth is a little less slick than Airplay – the current de rigeur standard in iPhone dock land – and in our experience brings up more frequent drop-outs. But it’s actually a better choice for a portable dock like this, and is perfectly reliable as long as you keep your source fairly nearby. Airplay becomes completely useless once you’re out of range of a Wi-Fi network. Bluetooth does not, so will continue to work out in green pastures where you’d be lucky to get a decent DAB signal, let alone an open Wi-Fi network.

At the price, the Soundfreaq Sound Step Recharge supplies all the capabilities we expect and more. However, we also often find that docks that pack in batteries and Bluetooth do so at the expense of sound quality. Thankfully, this one doesn’t for the most part.

The Soundfreaq Soundstep Recharge is larger than most of the £100-ish battery-operated iPhone docks we’ve reviewed this year. While part of the size issue is down to pure design, it’s also caused by the sonic strategy employed here.

Where many dinky iPhone docks use a simple dual driver design, the Soundfreaq Soundstep Recharge has three – two 2in drivers for the mid-range and treble frequencies and a larger 3in “subwoofer” driver to provide low-end power. It’s this larger speaker that benefits the most from the extra internal space of the dock, giving it a larger area within which to brew.

It works wonders too. Where other small battery-powered docks like the Sony RDP-M15iP are conspicuously limited by their size and form factor, sounding rather reedy and underpowered, the Sound Step has a full-blooded, bassy tone that lets it compete fairly well with most sub-£200 docks. There are three sound options that give you a little control over its sound signature too. Dubbed UQ3, this equalisation engine has three settings, a standard one, a bright one and a bassy one. Each is commendably tasteful – with those that extend the two extremes of the frequency spectrum not leaving the Sound Step too boomy or harsh-sounding. You switch between these settings with a simple tap on one of the buttons to the left of the dock’s front panel.

Using the A2DP Bluetooth, rather than a wired or dock connection, limits the sound quality a tad – as Bluetooth streaming is lossy – but at this level most will barely notice. While a solid performer, this isn’t high-end audio and the fidelity is limited by the speaker array more than the use of Bluetooth.

The Philips Fidelio range offers similar performance for slightly less money if you don’t need the battery-powered or wireless functionality. But if you care about these features, we’d opt for this Aztec beauty over something like the Fidelio DS7700, offering a slightly more powerful sound for less money.

The internal battery is good for up to six hours of playback, giving slightly less longevity than the Fidelio DS7700, and the same stamina as the Sony RDP-M15iP. We don’t miss the extra three hours offered by some others, because we consider the Sound Step to be semi-portable rather than something to take out often. It’s just that little bit too chunky, and its design is less focused on making the thing fold up into a low-volume form. As this approach has led to a larger-scale sound that doesn’t feel hampered by its portable leanings, we’re pretty happy about this compromise.

Packing-in the right features at the right price, and offering sound quality better than the majority of battery-powered docks, the Soundfreaq Sound Step Recharge is one of the very best portable docks you can get for under £150. It’s much less portable than some, without any of the fold-away bits of other options, but when the result is a beefier, larger-scale sound, we’re happy to make the trade off. If you only need occasional outside use, it’s a cracking buy.