What is the Soundboks?

Soundboks is one of the more interesting crowd-funded audio projecst we’ve seen to date. It’s a gigantic wireless speaker, effectively a PA unit turned into a battery-powered party machine that wirelessly connects to your phone.

I reviewed a pre-production Soundboks months ago, but today we’re looking at a full production model to see whether any initial niggles have been solved. This new model is more polished, but the same old sound quality gremlins are here. 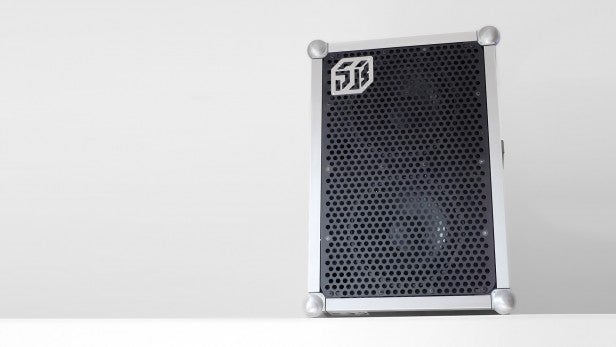 The Soundboks is a musical flight case. It’s 66cm tall, 32cm thick and each side is armoured with aluminium. It looks like something you might see being yanked off a tour bus by a big hairy bloke wearing an Iron Maiden T-shirt.

It’s a muscular look, but one that isn’t just a pose. The Soundboks is designed for abuse, to be able to withstand being around a crowd of dancing people whose inhibitions have been loosened by one substance or another. 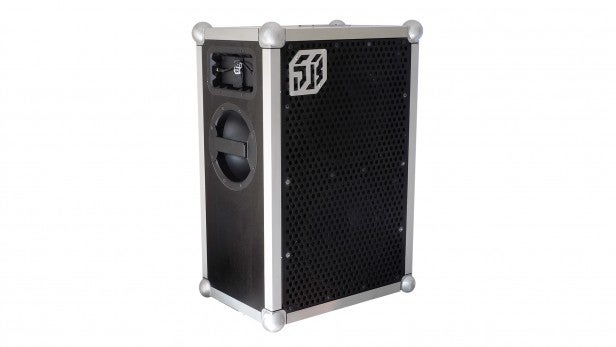 The most striking element is the array of eight of metal balls, one at each corner. These are solid aluminium and lift the Soundboks off the floor a little, helping to avoid scraping the black side panels. They are tough too, though, made of birch plywood.

In our sample the aluminium balls on the edges seem to already have started oxidising in places, but otherwise feel like they’ll last forever.

All this muscle-flexing makes the box 14.5kg, far heavier than even the largest ordinary Bluetooth speakers. However, there are huge carry handles on each side that let two people carry the load. I’ve found it easy enough to carry over short distances, but if you need to trek a few hundred metres to a beach, for example, you may want to get a friend involved. 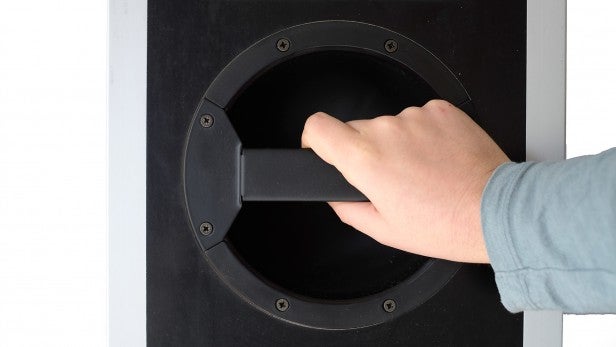 The hardiness of the Soundboks goes beyond the build too. Its maker says the speaker is snow, rain and splash-proof, although no IP certifications are mentioned. This is the industry standard used to specify exactly how dust and waterproof a piece of hardware is.

However, given you’re not going to submerge the Soundboks in water, knowing it can survive rain is the main thing. It’s a bit of a surprise when you look at the side, though. On the left edge is an alcove into which you jam the large battery, and the power connection is not protected from the elements. 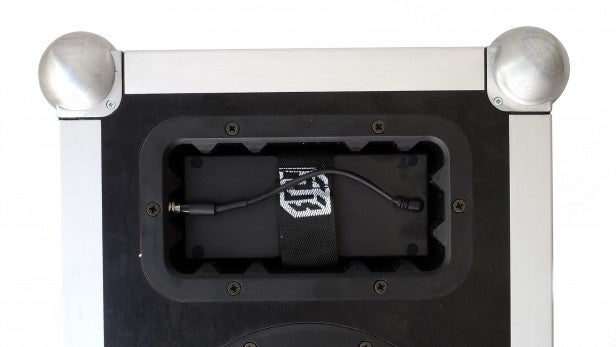 This is no ordinary battery, though. Rather than using a normal li-on battery Soundboks uses LiFePO4 batteries. These are lower-voltage and lower density than li-on, but can operate in hotter and colder conditions. They’re the sort used in some outdoor vehicles.

Battery life is one of the best parts of the Soundboks too. As I’ve only maxed-out the volume briefly, I’ve not needed to recharge the battery during testing. It’s designed to last 30 hours at ‘loud’ volume, 16 hours maxed-out and up to 200 hours at the low volumes you might use while just relaxing with the speaker nearby.

Two batteries are included too, the idea being you’ll have enough for your own mini festival during a weekend’s camping. Public service announcement: don’t be the people pumping out techno in a packed campsite at 3am. 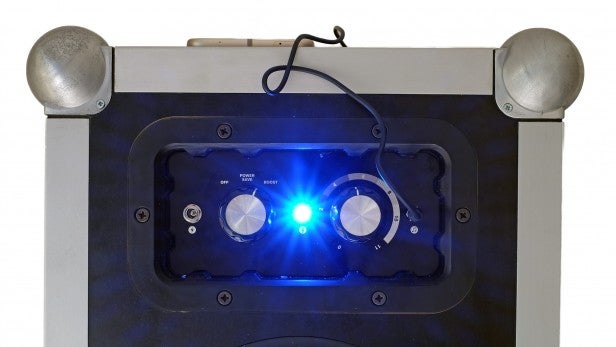 The other special feature of the Soundboks is simplicity. There are just two knobs here, one to switch the speaker on and between the standard/boost modes, and another to alter volume.

Once turned on, you can pair up a phone to the Soundboks using the standard Bluetooth method, and you’re away. It uses Bluetooth 3.0 rather than Bluetooth 4.0 or 4.1 because it offers higher range. Sure enough, the range is excellent. A wired source can also be plugged-in using a 3.5mm input. And as we’ll see, you’ll want to use this option. 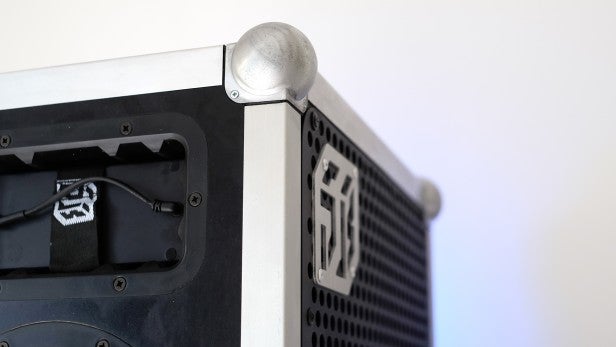 The Soundboks paints itself as a brand new category of speaker, and to an extent it is. However, it’s sensible to think of this as a mainstream take on the portable PA system, the kind of speaker busking musicians use.

Its driver layout is quite different, though, and the Soundboks is significantly larger than your standard entry-level portable PA box. It uses two sets of drivers, a pair of roughly 8-inch mid/bass cones and a pair of tweeters. Each driver has its own 46 watt digital amp.

The usual arrangement is a 10-inch bass driver matched with a tweeter, although the £449 Roland Street Cube Ex uses the same basic driver layout, with less powerful amplifiers. 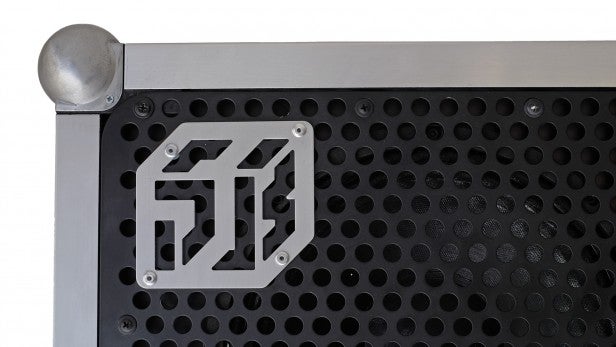 Sound quality varies hugely depending on whether the Soundboks is used wired, or with a Bluetooth connection. Let’s start with the better performer: wired.

Plug your phone or another source into the 3.5mm jack and the Soundboks sound is reasonable. Compare it to a standard higher-end Bluetooth speaker and the treble will sound limited, the mid-range lacking the rich smoothness you get with an indoor speaker and the bass doesn’t have the punch or dynamics you might expect from those big drivers.

However, that’s not really the point. The Soundboks output travels much better than mainstream speakers, not being designed just for listeners within a few feet of the actual box. 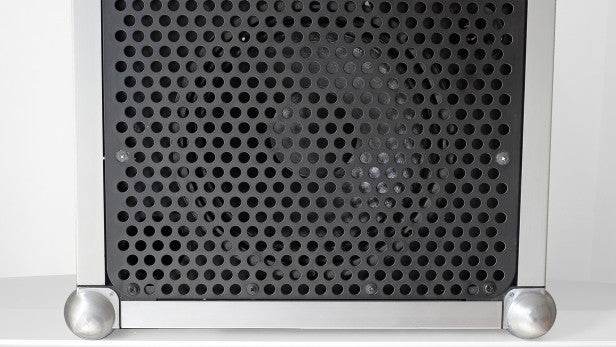 One thing to consider if you’re buying this for house parties rather than outdoors ones is the lack of sub-bass. Its output below 70Hz is neglibible, and even the Soundboks FAQ section identifies the bass floor at 66Hz. In other words, these speakers do not actually recreate any appreciable sub-bass, which is quite obvious when you play dance music. The Soundboks doesn’t pump as you might hope.

My own home floor standers can deliver reasonable output at just under 30Hz.

This kind of bass roll-off is actually the standard for portable PA units, though, as they rely on the really-not-made-up principle that your brain fills in the missing frequencies when listening in a wide open space. It doesn’t help when music features isolated sub-bass notes, though. The Soundboks just can’t deliver them.

For the dance music haters out there, have a listen of Grandaddy’s He’s Simple, He’s Dumb, He’s the Pilot, which features a great speaker-straining descending sub-bass line. 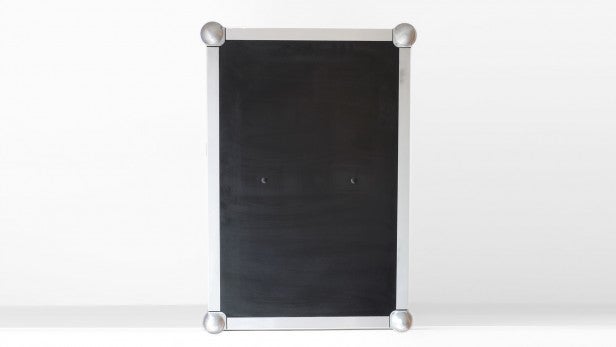 I wasn’t actually blown away by the max sound output of the Soundboks, but it still pushes at the bounds of social acceptability. At around 80 per cent volume I was able to use the speaker without feeling as though I was risking a noise order notice, but I’d suggest this speaker for use on a secluded camping or beach holiday with a bunch of friends rather than a gig where listeners might be 40m away. 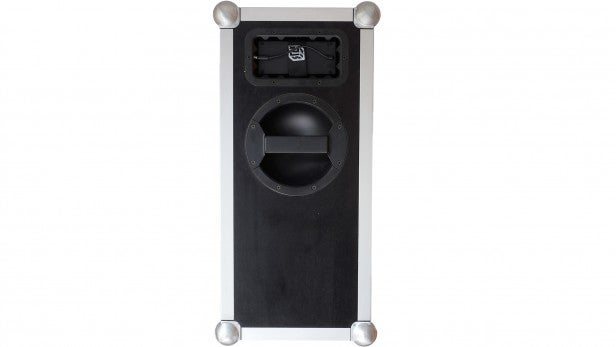 The Soundboks sound quality didn’t wow me, but when used wired it delivers sound as promised. Bluetooth quality is why we can’t give the speaker a higher score.

Use a wireless connection and the sound quality nosedives, the mid-range de-rezzed, sounding digital in the ugliest sense. It makes piano lines sound buzzy and all vocals lo-fi, as if you’re listening to a 64kbps MP3.

Using Bluetooth the Soundboks sounds very poor, and that doesn’t change as you increase the volume or use the ‘boost’ mode, which just seems to jack up the signal by a few decibels.

What this tells us is that the fault likely lies with the DAC, which is what turns the digital signal from your phone into the analogue signal delivered to the speaker drivers. When you use the 3.5mm input that process is handled by your phone, or whatever source you’re using. It seems the cheapest component in the catalogue must have been used because I can’t recall hearing such an obvious degradation in sound quality in almost 10 years of reviewing audio gear.

Should you buy the Soundboks?

Poor Bluetooth audio quality batters one of the lead attractions of the Soundboks, which is a real issue when you’ve a right to reasonably high expectations from a speaker this expensive. The sensible portable PA alternatives fall out of our usual remit, because they’re effectively ‘pro audio’ speakers. However, it’s worth detailing a few of them to give you some extra context on what has inspired this project.

At the higher-end, the Denon Envoi costs £579 and has wheels plus an integrated retractable handle, a bit like a piece of luggage. Soundboks has detailed its own $79 trolley accessory, but isn’t available to buy right now.

Coming down in price, the Alto Transport 12 has a huge 12-inch main driver and costs £369. It also comes with a wireless UHF mic it you fancy annoying your guests with some MC-style babbling.

Roland’s Street Cube Ex mentioned earlier is a wedge shape and costs £449, but as it runs off eight AA batteries, it may be a bit of a portable pain.

The Behringer MPA40BT is a cheaper option at around £150. It has Bluetooth and thanks to its relatively basic feature set should be fairly easy to use.

I can’t directly comment on how these speakers compare directly to the Soundboks in terms of sound quality, but the patchy performance and economies of scale involved with these more established lines suggest they’ll offer better value. For now, though, the Soundboks is still the simplest outdoors party system you can buy.

A party-ready outdoor speaker that doesn’t quite sound good enough for its price.