Update 05.12.2011: Soundfreaq has confirmed the Sound Stack will launch for £299, but did not rule out it being discounted by retailers.

As phones become our music players of choice the race to make the best dock to show off their audio prowess intensifies. Categories are already becoming clear: under £100, under £300, up to £500 and above. Quality products can be found in each range, but where this dock breaks the mould is its determination to fight above its station.

The ‘Sound Stack’ comes from newcomer Soundfreaq and will not launch in the UK until 2012. It is projected to cost between £249 and £299 yet the company claims it can stand toe-to-toe with docks nearly twice the price. Marketing bravado is nothing knew, but the most interesting aspect to the Sound Stack is Soundfreaq may have a point. Soundfreaq, a self-described “global co-op of craftsmen, designers and engineers… working outside the limitations of a traditional corporate structure… to develop products from the ground up”, has been working on the Sound Stack for two years. As such it displays many qualities which we suspect wouldn’t have made it through corporate board meetings. In short, inside and out, the Sound Stack is unusual.

Most apparent of these is the design. Breaking drastically from the curves and smooth edges currently en vogue, the Sound Stack is all straight lines and 90 degree angles making it more of a homage to the 1980s. We’ve found reaction to this is mixed with a love it/hate it aesthetic where a multinational corporation made have played safe. Another surprising aspect of the Sound Stack is its weight. Audio has long traded in weight as a sign of quality components, but despite dimensions of 440 x 160 x 190 mm, the Sound Stack weighs just 4.7Kg it is 300g lighter than the portable Arcam rCube.

There are other decisions which also seem strange as you look deeper. Soundfreaq is marketing the Sound Stack as “made for audiophiles” and it carries the tagline “Authentic Audiophile Performance Goes Wireless”. The instinctive reaction to this would be the inclusion of Apple’s AirPlay or Kleer, two lossless wireless audio standards, but Soundfreaq has opted for Bluetooth, a lossy technology not renowned for getting audiophiles excited. That said audiophiles should be excited, especially audiophiles on a budget.

The flip side to some of Soundfreaq’s more unusual choices is they extend to some truly different internals. The Sound Stack is fitted with a 2.2 speaker configuration, abandoning the typical 2.1 drivers and subwoofer arrangement to pair two drivers with two subs – one facing the front, the other the rear. Branded ‘DubSub’ the aim of this unusual setup is to reduce the amount of reverb often felt by blasting a single sub beyond its capabilities. By positioning the two in different directions it also balances the sound to make bass response more even. DubSub combines with custom-engineered Kevlar-reinforced drivers, a tuned triple-ported housing, and Soundfreaq’s proprietary UQ3 spatial sound enhancement which is designed to widen the sound stage and create a greater sense of sound separation. Think room filling audio, rather than shouting from a corner.

So how does it all work? Remarkably well. In describing the Sound Stacks’ audio quality it is important to address the ‘Soundfreaq’ brand name. While anything with a misspelling of ‘freak’ would suggest it is going for bass heavy teen-appeal, Soundfreaq’s reason d’être couldn’t be more different. Instead of warm, bassy fuzz the Sound Stack actually chases accuracy… and with remarkable success.

To sum up the Sound Stack in adjectives we would choose: controlled, balanced, precise and detailed. This is no delicate flower though, the Sound Stack produces a substantial 100 watts. Watts are no more an indication of sound quality than megapixels are for cameras or gigahertz for computers, but it will indeed hold its own against more expensive docks like the 2011 TrustedReviews Awards winning rCube and bombastic Bowers & Wilkins Zeppelin Air. The shock is the Sound Stack actually holds its shape better than both docks at maximum volume. The Zeppelin can become muddled and the rCube, once a pass master until its volume cranking firmware update, will distort.

Soundfreaq has also pulled off a masterstroke with its UQ3 spatial enhancement tech. Our primary criticism of the otherwise outstanding Zeppelin Air is it can sound like it is shouting from a corner, but the Sound Stack revels in creating distinction between its stereo channels. It doesn’t succeed on a level of the rCube because while the Sound Stack uses algorithms to trick the ear, Arcam has physically positioned the rCube’s speakers at 45 degree angles to truly create its most compelling feature.

That said the fact we are talking about the Sound Stack in the same breath as docks originally priced at £500 is high praise indeed. Of course, there is a but and that but is important. For all the accuracy and composure Soundfreaq has been able to reproduce the Sound Stack can lack emotion. ‘Sterile’ would be going too far, but ‘scientific’ certainly wouldn’t. We found ourselves appreciating the Sound Stack on a technical rather than emotional level. This might sound harsh, especially given the Sound Stack’s DubSub makes it proficient across a wide range of musical genres, but ‘proficient’ is again the word which comes to mind.

Another bump in the road is the aforementioned choice of Bluetooth. Soundfreaq has pulled out all the stops with both A2DP and lossless AAC streaming support, but over time it sounds hollow in comparison to natively docking devices or the lossless streaming of AirPlay and Kleer. Yes you do benefit if all your music is encoded in AAC (these files are sent directly to the dock and decoded there), but this only benefits a single codec and when shuffling through music only serves to make the sound quality between it and other codecs more jarring. 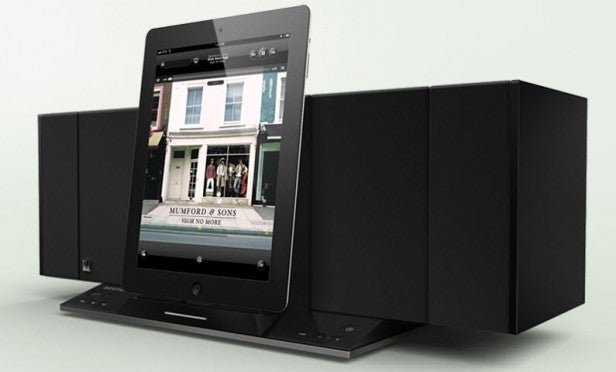 Despite these caveats the Sound Stack is too good a dock to end on a negative and Soundfreaq does serve up a number of notable pluses. Firstly its angular shape will happily hold and power an iPad, an important consideration given the weak and/or iPhone-size sunken connectors on most docks). Secondly it is far more friendly to non-Apple devices than most with an auxiliary input augmented by a universal USB-charging port so your Galaxy  Nexus or Nokia Lumia 800 won’t run flat as with most docks. Furthermore the simple Sound Stack remote neatly clips magnetically to the back of the dock and Soundfreaq offers a free iOS and Android app for controlling the dock remotely. This includes access to the Sound Stack’s FM radio, though we can’t see this being used much with web radio now so popular. An optical input also allows the Sound Stack to be used as a soundbar for DVD/Blu-ray players, TVs and multimedia players like Apple TV 4K. Furthermore while Bluetooth may have its limitations it does assist in achieving arguably the Sound Stack’s most appealing feature: price.

Soundfreaq says UK pricing will be between £250 and £300 when it launches early next year. Given this places the Sound Stack in the same price range as the £299 Geneva Sound Model S and Bowers & Wilkins Zeppelin Mini, yet it competes with full size Zeppelin and Geneva Sound’s own £550 Model M it is bursting through established industry price points. The trouble for the Sound Stack is should it fall closer to £300 Arcam has recently cut the £500 rCube to £350. With the rCube still having the overall audio edge, sporting Kleer lossless and being truly wireless (it has an inbuilt battery good for eight hours of audio playback, the Sound Stack has none) it is hard to see past splashing out another £50.

”’Verdict”’
Soundfreaq has announced itself in fine style. Despite the misleading brand name, the manufacturer excels at detailed, accurate sound quality and the Sound Stack packs both great punch and razor sharp precision – particularly at high volumes. The 2.2 ‘DubSub’ dual drivers, dual bass combination has immense promise and we will await future generations with great interest. In addition, the dock comes with bags of functionality and is arguably the most iPad and Android/non-Apple friendly dock on the market.

What hampers the Sound Stack are marmite looks, a slightly cold sound signature and the fact one of the best £500 docks of the year is now on sale for just £350. That said the Sound Stack blows the current sub-£300 market out of the water and if pricing is finalised nearer to £250 it will prove a real bargain. Either way Soundfreaq is a new name to watch very closely indeed.