If I didn’t know better, I’d swear that Soul Bubbles was a close cousin to LostWinds. The two games share a similar aesthetic, offer a similar mix of puzzles and action, and have the same kind of relaxed pace. One is on the Wii and one on the DS, but you suspect that LostWinds could easily have worked on the handheld platform, or Soul Bubbles on the Wii. Both focus around drawing on the screen to create air currents that will blow objects in a particular direction. Of course, in LostWinds the object was usually the youthful hero and the game was a bit more of a traditional platform affair. In Soul Bubbles the object is, well, bubbles and the action isn’t quite so conventional. All the same, the games sometimes feel like two peas from the same pod. 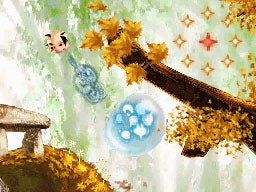 This doesn’t worry me one bit. I loved LostWinds, and I love Soul Bubbles nearly as much.


As in all great games of this type, the setup is simple. You’re an apprentice shaman on some weird fantasy world, and you’re tasked with escorting a collection of lost souls to their new home in the afterlife. The lost souls are too fragile to travel unprotected, so they must be enclosed in bubbles and escorted from the starting point of each level to a sacred block where they’ll make their final transition. To do this, your little shaman has to blow the bubbles in the right direction, which is done just by drawing a line through the bubble. Small lines mean small puffs, big lines mean big puffs, and drawing one big line then holding the stylus in the direction you want the bubble to travel will keep a continuous stream of breath coming until the poor little chap runs out of steam. 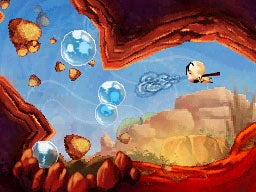 Once you’ve got used to this, the game then throws in masks. By donning a mask (selected by holding the D-pad in one of three directions), the shaman can perform important operations on the bubbles. Wearing the tiger mask, he can slice bubbles into smaller bubbles with a quick swish of the stylus or drag two bubbles into one. Wearing the bird mask, he can draw new bubbles on the screen with the stylus. Finally, wearing the elephant mask, he can shrink bubbles or make them disappear entirely. The important thing to note here is that, at no point are you really controlling or worrying about the shaman. He can pop in and out of the large scrolling levels at will, even teleport to distant areas through a scrolling map accessed using down on the D-Pad. He’s really just a glorified cursor. That means that all you need to worry about is the bubbles, and getting them from A to B. That’s enough.

As you might expect, the levels are fairly long and full of danger, asking you to navigate your fragile charges through wide open areas, cramped tunnels, hostile, bubble-bursting predators, traps, crushers, prickly flowers, blow-pipe wielding tribesmen and a host of other obstacles. The first thing you’ll notice is how good the bubble physics are, with the bubbles bobbing around, squashing and deforming to get through narrow cracks – you’ll need to split them up if things get too tight – and gently pushing upwards when surrounded by water. After a few levels, the controls are surprisingly intuitive, and the whole experience has a gentle flow, with one mildly tricky area leading neatly on to the next with enough interest to keep your brain engaged. 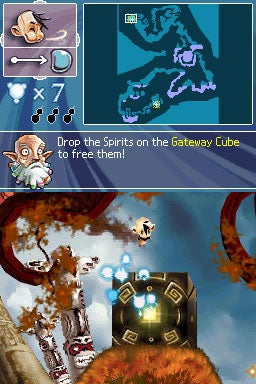 The relaxed feel is complemented perfectly by the visuals, the bright and quirky 2D sprites coupled with the scenery which has a lovely hand-painted look. You’re regularly impressed by the amount of animated background detail, whether flowing waterfalls, drifting volcanic ash or rustling leaves. The ambient tribal music also helps, leaving you to focus on the sound effects, which provide a valuable early warning of upcoming dangers. 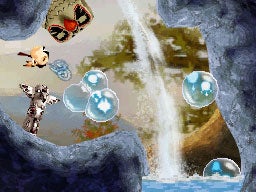 What I like about Soul Bubbles is that, while other games would have taken this basic gameplay and made it work throughout the whole game, this one twists it into a series of variations, each one themed around a different world. We’re all used to platform games that do this rather clumsily. Here’s the ice world, so it’s time to slip and slide. Here’s the fire world, so watch out for the flaming lake beneath your feet. In Soul Bubbles, however, each world really does have its own distinctive feel. To start off with, it’s all gentle forests and simple puzzles, but then you get cracked, red desert lands with sandstorms and rocks that need to be crushed. After that comes a world full of water-logged passages and spiky fish, or a realm of aztec ruins bursting with bubble-propelling mechanisms and fiendish traps. By the time you’ve reached the ice world, you’re wondering where they can take you next, only to be rewarded with levels of icy chutes, ramps and loop-the-loops, where your bubble sinks to the floor and rolls at ludicrous speeds, making your task one of judging momentum and keeping it rolling in the right direction.

And the more you go on, the more Soul Bubbles introduces cool new ideas. It turns out that your bubbles don’t just have to enclose the little lost souls; you can also use them to transport water, or capture bursts of light or heavy gas. A world themed around the high-altitude, flag-strewn temples of Nepal is another highlight, as you work your gas-filled bubbles to break obstructive banners or explode the rocks barring your way. With a bit of help from some explosive seeds, you can even blast spiky flowers and patrolling foes. 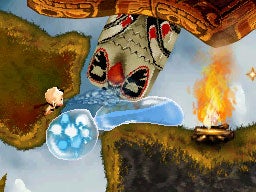 This is the sort of game I like. It’s attractive, engaging and it constantly stretches you and your understanding of what you can do with the tools at hand. My only concern is whether it stretches you quite far enough. Much of the game is pretty linear, and the only reason to stray from the obvious path is that you need to complete some special seeds to open up the final level, and you’ll only find them if you really work each level top to bottom. A lot of the time, it’s fairly obvious what you have to do, and if it isn’t, the game throws in a handy hint stone that basically gives the solution away. I know it’s difficult to hit a balance; that if you make the puzzles too tricky, you end up preventing a chunk of your audience getting further in the game. All the same, there are times when Soul Bubbles spoon-feeds you a bit too much.


Otherwise, the only thing I can fault the game for is a fairly fiendish jump in difficulty between the bulk of the levels and the final world. After hours of fairly relaxed play, where your bubbles get popped occasionally but there’s nearly always time to scoop up the endangered lost souls, the last world puts you under an awful lot of rapid-death pressure, with spikes, fire and crushers everywhere you look. This might leave some of the more casual gaming audience that Soul Bubbles will rightfully attract in a state of shock, though we’re certainly not talking Ninja Gaiden II harsh, by any means. 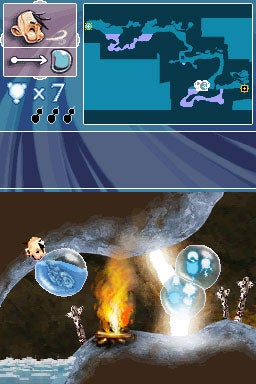 These two quibbles are just enough to stop Soul Bubbles achieving instant classic status, but this is still the most enjoyable DS game I’ve come across this year. If enough people see it and try it, it should be – and deserves to be – a sleeper hit.


An ingenious and enjoyable action-puzzler that puts the DS stylus to good use. Perhaps the puzzles don’t ramp up in difficulty quite enough, but maybe that helps make it the perfect game for lazy summer days.