What is Sony YouView?

The Android TV system built into many of Sony’s 2015 TVs certainly introduced a greater amount of content to Sony’s smart TV marketplace. Except, strangely, when it came to the key UK catch-up TV services. Here we’re looking Sony’s attempt to rectify the issue by adding to its TVs’ smart features a new and fully integrated version of YouView – the first time this service has been built into a TV.

Related: The Best TVs You Can Buy

Those who have previously used YouView in a set-top box context will immediately recognise the implementation of it on Sony’s TVs (I ran it on a KD-65X8505C). It uses the same colour scheme, logos and on the whole follows the same structure. It isn’t the most glamorous of designs, but the text is legible and the system makes extensive use of photo-quality content link icons to populate most of its menu screens – all of them bar the electronic programme guide screen, in fact.

As mentioned earlier, the reason behind YouView’s inclusion on Sony’s TVs is in response to a significant shortcoming of the Android TV platform that Sony has turned to for the majority of its smart TV features in 2015; the lack of support for many of the UK’s major catch-up TV services.

In fact, Android TV didn’t have any of the big four UK catch-up services initially. While it now has the BBC iPlayer, the ITV Hub, All 4 and Demand 5 remain off the menu. 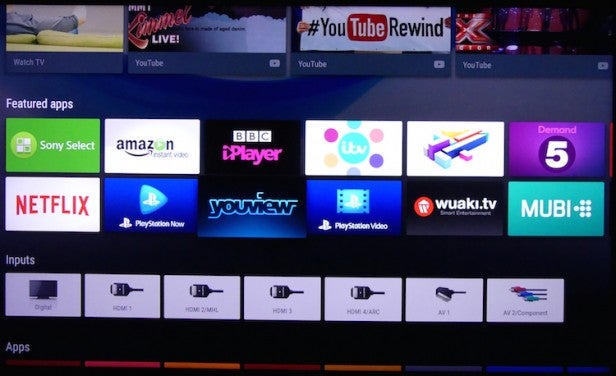 Happily, the addition of YouView to Sony’s TVs not only brings all the big four catch-up services onboard at last, but packages them in YouView’s brilliantly easy to use “wrapper”.

We’ll look at what this “wrapper” brings to the party shortly, but first let’s go over how you find YouView in Sony TVs’ menus.

Thankfully, the YouView firmware update integrates quite simply into Sony’s existing Android-dominated operating system. You can get to it via an app icon added to one of Android TV’s shelves, but for easier access just hit the “Guide” button on the remote control. This calls up the YouView EPG, rather than the previous generic EPG, and from here you can access all of YouView’s deeper features.

YouView has even found its way into Sony’s “Discover” smart interface, occupying the top three rows of this scroll-down alternative to Android. The top Discover row is connected to the YouView Guide and displays a scrollable list of icons for the programmes currently being shown across all the digital tuner channels. 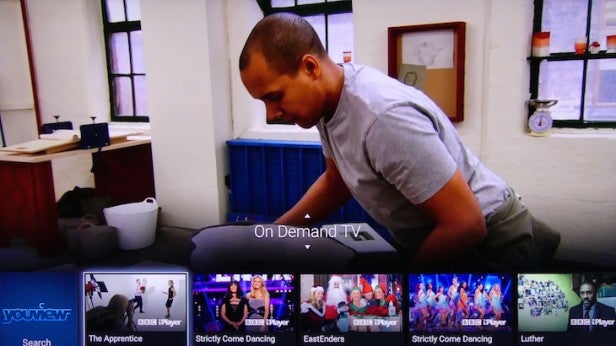 A nice touch here is that information regarding any show you highlight as you scroll along this menu appears above its icon.

The second YouView “shelf” of the Discover menu is focused on On-Demand TV, showing direct links to recommended catch-up TV content from all of the BBC iPlayer, ITV Hub, All 4 and Demand 5 apps that YouView integrates. You can also instigate a search from this shelf.

The third and final Discover YouView tier is essentially the same as the second, except that it focuses on On-Demand Films rather than TV shows.

The headline feature of YouView for many will be its 14-day Electronic Programme Guide, which covers seven days into the future and seven days in the past. The past 7 days’ listings also seamlessly integrate any programmes that might be available for streaming via the BBC iPlayer, ITV Player, All 4 and Demand 5 catch-up apps.

Programmes from the past seven days that are available to watch appear on the listings with a “play” symbol next to them. Just select one of these shows from the EPG and YouView will open up the relevant catch-up app and start playing the show selected. 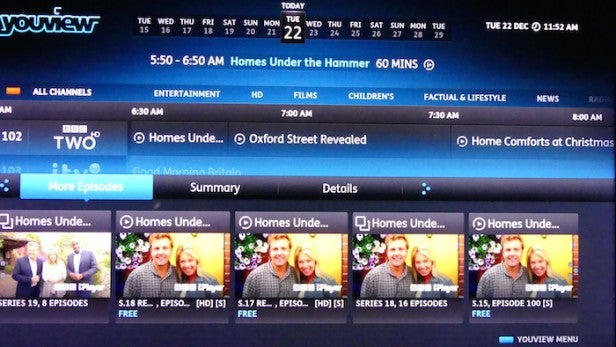 The glory of this approach, of course, is that it puts on-demand streamed content in the same space as live TV content, making for a much more convenient and straightforward user experience.

This “past, present and future EPG” is far from YouView’s only charm, though. For instance, it also lets you access each of the four catch-up platforms through their own apps.

You can’t help but notice, too, that the screen from where you can select the BBC iPlayer, ITV Player, All 4 and Demand 5 apps also carries a few empty slots into which YouView clearly hopes it will be able to add more apps over time. Apps such as UKTV Play, Milkshake 5 and S4C free catch-up services currently found on external YouView set-top boxes, for instance.

Needless to say, every catch-up service that can be added will make the backwards EPG system more effective. 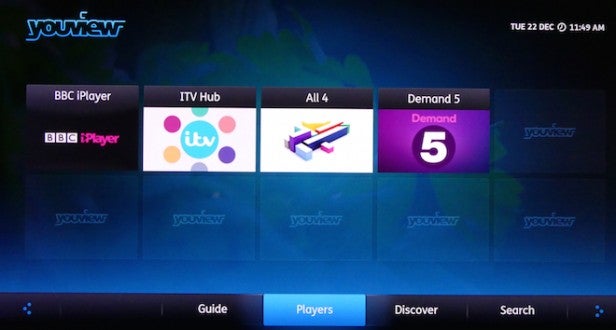 One last useful feature of the new Sony YouView app is its Discover section. This presents you with a horizontal scrolling list of recommended shows culled from the on-demand libraries of the four content providers that the Sony YouView app currently works with. The content presented here can reflect either the most popular or the latest shows, depending on which filter you choose.

Used as the main TV for the review period
Tested for more than a week
Tested using industry calibrated tools, discs and with real world use
Tested with broadcast content (HD/SD), video streams and demo discs
Next
Ease of Use, Performance and Conclusions Review