What is the Sony Xperia Z5 Compact?

The Sony Xperia Z5 Compact is the smaller sibling to the Xperia Z5 and the 4K-screen packing Z5 Premium. It’s also the successor to the Xperia Z3 Compact, retaining the same 4.6-inch 720p HD screen in a water-resistant body.

As is the case with its predecessor, Sony includes as many of its high-end features as it can into the smaller frame. So you get the same great camera, 64-bit Snapdragon 810 processor powering performance and the ability to shoot 4K video just like you can on the Z5.

SIM-free, the Z5 Compact costs around £450, which is £100 cheaper than the Z5. On the face of it, if you’re happy to make some compromises with the design and screen quality, then Compact has plenty going for it. However, I found that the longer I’ve been living with it, the more niggling issues I discovered.

In recent years, Sony has stuck firmly to its “Omnibalance” design philosophy. When the Xperia Z launched in 2013, it was refreshing to see a handset that was so different from what the likes of Apple, Samsung, LG, HTC were bringing to market. Those same eye-catching elements introduced back then have trickled down into Sony’s other handsets, including the Z3 Compact.

The Z5 Compact offers a frosted-glass finish on the back and front of the phone, which, although feels very much like plastic to touch, makes a welcome change from the slippery tempered glass used on last year’s phones. For anyone who’s owned a Z3 or a Z3 Compact, you’ll know all about how the issues of that glossy back, especially if you like resting your phone on the armchair of your sofa or any soft material surface.

Measuring in at 8.9mm thick compared to the Z5’s slender 7.3mm profile, the Z5 Compact is a far chunkier phone. In fact, it looks the handset’s back and sides are sporting a bumper. Unlike the Z5, these sides are made of plastic, rather than the more luxurious metallic finish.

In white, I can’t help but feel that the Z5 Compact looks like a toy. There are few companies that have successfully delivered an attractive white phone; you can add Sony to the group that doesn’t quite pull it off. The good news is that the Z5 Compact is also available in black, yellow and red – and I’d be inclined to go for one of these over the white. 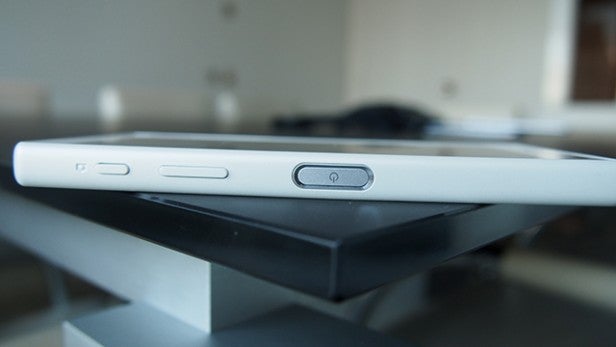 The buttons and ports are positioned in pretty much the same place you’ll find them on the Z5.

The Compact moves the nano-SIM and micro SD card slot further down the left edge of the phone, next to a small gap where you can attach a lanyard. Elsewhere, it’s an identical layout to the Z5.

Thankfully, you still get a dedicated camera button, which is handy for taking photos in landscape mode. Plus, the larger, side-mounted home button now includes a fingerprint sensor. To set it up, head into the phone’s security settings and follow the process, which involves placing your finger on the power button and lifting it off when you feel a vibration.

While I found Sony’s fingerprint sensor better positioned than Apple’s Touch ID sensor and Samsung’s fingerprint tech, it was a little more temperamental in operation. You’ll need to be very precise when wrapping your finger around that button.

I should also mention waterproofing. Sony remains one of the few companies to offer such protection: its IP68 certification means it’s technically dust- and water-proof to a depth of 1.5m for up to 30 minutes. Except Sony doesn’t want you to take your phone into the water, as the company bizarrely advised its customers recently.

The Z5 Compact certainly isn’t an ugly phone or an uncomfortable phone to use, but in many ways it just isn’t as nice as the Z3 Compact. Especially with its thicker form. 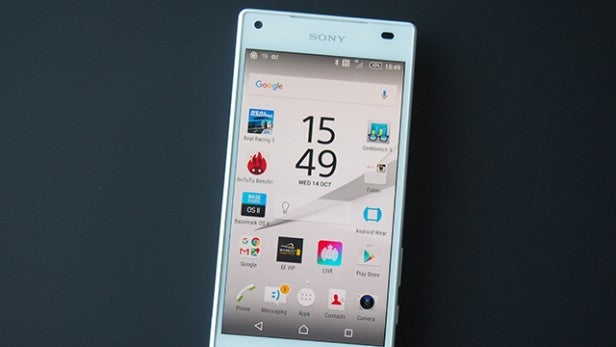 The Z5 Compact sticks with the same 4.6-inch 720p HD panel as its predecessor – and the LCD screen is scratch-resistant too. Although this means it might not be as impressive as its bigger brother for watching films and playing games, overall there are few areas in which I can pick holes.

Saying that, resolution is something that needs addressing. Is it time for Sony to upgrade to a Full HD display? There are a number of significantly cheaper phones out there sporting 1080p screens – although few similar-sized phones offer a resolution higher than 720p HD. It’s arguable whether the benefits of the extra resolution are as noticeable as they are on an 5-inch screen or above.

The increase in pixel density from 319ppi on the Z3 Compact to the 323ppi here does result in sharper screen quality and improved clarity. In addition, Sony includes its now standard Bravia TV-inspired display technologies such as a Triluminious display, X-Reality Engine and Bravia Engine 2.

The bottom line is that the Z5 Compact’s screen is exceptionally bright, offers great contrast and accurate colours.

Out of the box, colours can look a touch oversaturated and won’t be to everyone’s liking. However, Sony does offer a way to address this: head to the Display setting, where you can adjust white balance and turn off the image-enhancement options, which can overdo it with vibrancy.

Viewing angles on the Z5 Compact are solid as well, and it offers great visibility in bright sunlight; Sony’s adaptive contrast technology aids the ability to view and read the screen at day or night.