What is the Sony Xperia Z3v?

T-Mobile users have enjoyed the option of buying Sony’s best Android phone, the Xperia Z3, for a while. Now, Verizon users can have a crack at a similar, but not identical model with the appropriately initialed Xperia Z3v. Internally, the same as the Z3 in all key aspects, Sony opted for a simpler design for the Z3v’s casing.

While reassuringly heavy in the hand, but slippery to the touch, the phone boasts solid build quality and packs a suite of Sony-centric features that make it as effectively multifunction as any phone on the market, even if it lacks some outward flash.

For a list price of $199.99 with contract (or north of $500 unlocked), the Z3v is a fully functional Android unit, offering an excellent camera fast processor and ample RAM and the advantage of new Sony-centric software attractions like PS4 Remote Play. The MSRP is steep for a contract phone — especially with so many units these days coming at s significant discount or even free with service. With that in mind, the phone faces the daunting challenge of packing in enough performance and overall features to warrant the additional ducats.

Whether or not the price is a sticking point, the user might come away from the Z3v wishing its outside matched its guts as it lacks overall visual panache and tactical comfort to satisfy aesthetically in daily use. 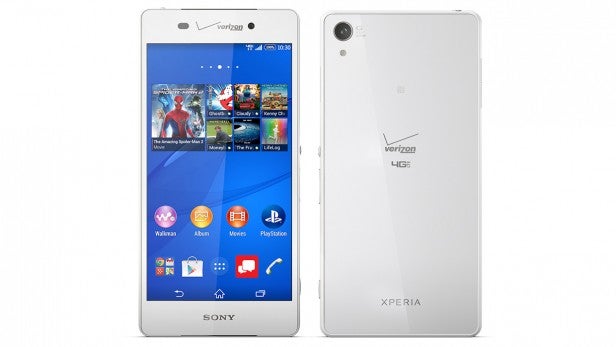 Both waterproof and dust sealed, the Z3v feels substantial in the hand. It weighs only 6.02 ounces, but its casing feels solid and well-balanced. While the HD screen rests under impact-resistant glass, the corners, sides and underbody of the phone is plastic. Unfortunately, that plastic is not grip contoured or surfaced with a tactical grip pattern. That’s a fancy way of saying it’s slippery in the grip without an external case.

That’s not to say it’s poorly made. It feels solid and every bit a serious piece of kit. It’d just be nice if the housing offered a bit more protection.

External buttons along the phone’s right edge include On/Off, Volume and a Camera Shutter button that overrides the touchscreen. The left edge packs hatches for a mini-USB connection and memory card insertion.

Our admittedly modest waterproofing test confirmed that the phone can be exposed to reasonable external moisture without concern. However, it’s wise to note we did not chuck the phone in the deep end of our local natatorium and let it set at the bottom for an hour.

Waterproofing in consumer electronics circles indicates a device is built to resist exposure to liquids. Complete or long term immersion is considered inappropriate use exceeding the design specs. So, the Z3v will keep humming away if exposed to the occasional liquid. Try to skip it across a lake or use it to paddle a small watercraft, and you’ll still be headed back to visit Sony and Verizon. 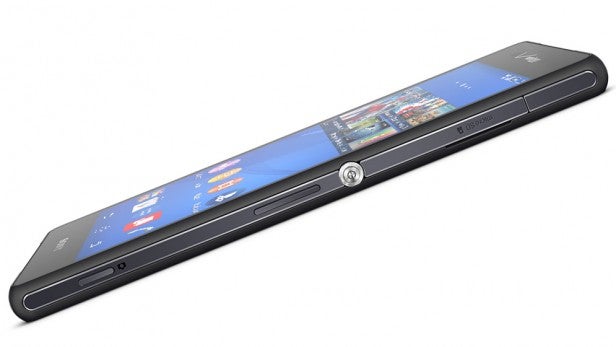 Aesthetically, Z3v essentially resembles a thin, black brick with a thin metal ring running along its outside edge — though there is a less plentiful white option available to Verizon buyers. Sony opted for angled corners on its rectangle design without metal brackets or corner protectors — a source for potential concern when you consider its slick outer surface.

Beauty pageant quibbles aside, the phone’s internal specs and functions are very strong and an easy match for the original Z3. The Snapdragon 801 2.5 GHz processor is an industry standard workhorse, and Sony packs in 3 GB of RAM to keep it happy.

The 5.2 inch HD screen exudes friendliness with ample luminosity and 1920 x1080 pixel clarity. That same bright, eye-catching display is quick to the touch — an essential feature considering the strong entertainment and multimedia component built into the phone. We’ll get into that in a bit. 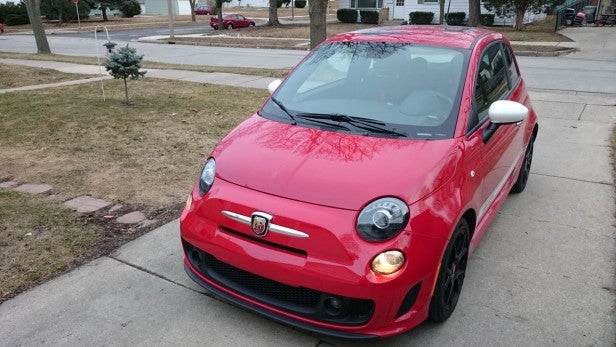 Sony makes some of the best consumer level digital cameras in the world, so it’s only natural the company would look to drop a top shelf digital number into their Verizon-friendly phone. This 20.7 megapixel camera with auto focus and assisted light balance is a prime feature of the Z3v. It manages 16 separate in-app settings to enhance the camera’s function, including:

The response time on each of these functions is quick and satisfying, with a virtual shutter button that pops up quickly when needed and responds to the touch with immediate image capturing.

However, take note: It might take the average user a second to figure out why that camera screen freezes temporarily — or why the onboard photo library includes a selection of blurred, inadvertent images. It’s essential to keep track of the camera shutter button on the outside edge of the phone.

A minor design flaw has that button right where the hands want to hold the camera for most photos — and that button overrides the onscreen camera controls. So, the library initially fills up with visual debris until said hands are trained to grip the phone in a better position for photos. 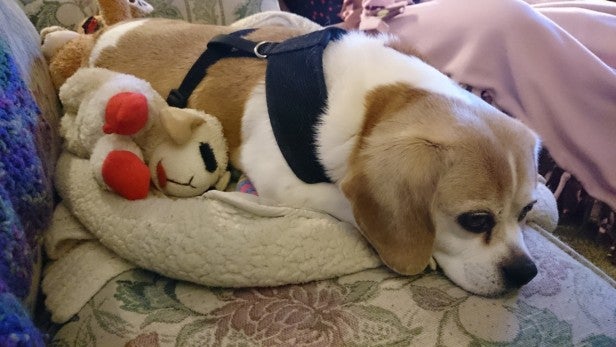 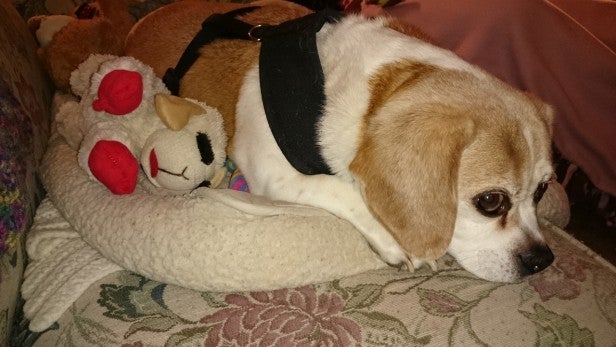 Image quality in strong to average light (exterior or interior) is excellent with that camera grabbing sharp, focused images on demand. The Xperia Z3v is especially impressive in closeup imagery, rendering detail and rich color gradients at a distance of just a couple inches.

Even in low light conditions, the rear-mounted camera maintains clarity and provides strong imagery. In situations where the user opts for the flash, the light boost doesn’t wash out imagery or introduce red eye. On the contrary, it seems to warm photos, especially interior shots. 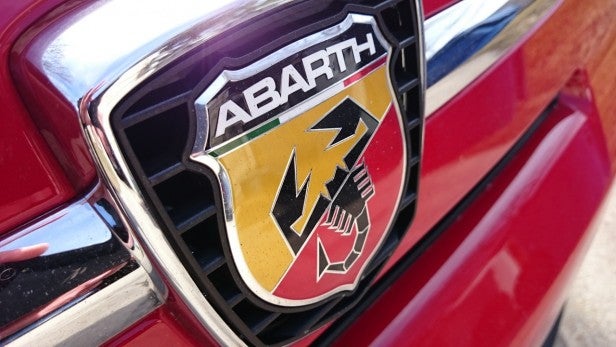 The Z3v captures a nice level of detail

However, it’s odd that Sony’s designers chose to install a merely passable 2.2 megapixel front-facing camera in the same unit. The rear setup is so powerful and capable that it sets a standard for Android phones, but the front-mounted unit (while functional) seems like a bit of a throw in overall. With many manufacturers (Microsoft, for starters) going beyond 5 megapixels for front cameras, a 2.2 number for the Z3v feels like an afterthought. It works, but Sony could’ve shot higher.

While you can take potshots at the overall look of the phone or that ho-hum front camera, you have to respect the overall capability and functionality of the Xperia Z3v. Much like the Z3 that led to this Verizon unit, the Z3v interacts with its native network for excellent call quality and stability.

Sony taps into its company identity to enhance the Android OS with a build of its strong suite of entertainment focused apps. The primary player here is the Sony PS4 Remote Play that effectively transforms the phone into a fully functional mobile gaming system on par with devices dedicated exclusively to joyful hours, sore thumbs and lost productivity (if you have a PS4 at home).

Remote Play allows users to stream PS4 games directly to their phone. While the phone provides a touch-centric (and admittedly touchy tempered) interface, dedicated gamers can snag a Dual Shock controller mount to simulate the PS4 experience completely. Such gameplay power must be a prime sales feature for the Z3v – potentially making it a go-to phone for those looking to make their smart device as much an entertainment source as a communication option.

Working our way through the standard Android apps, response was snappy and both while loading an operating. There were no occurrences of crashing or RAM lag regardless of app. 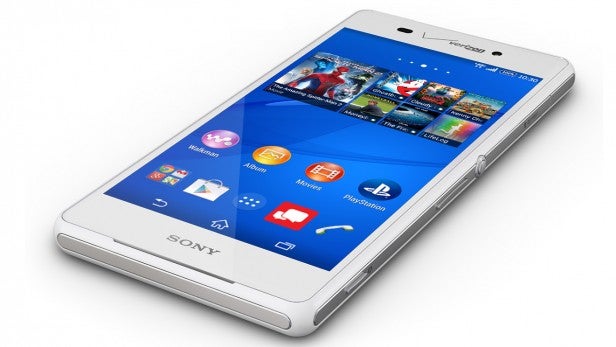 Be warned. The 3,200 mAh battery will keep you talking for 21 hours, but the HD gaming functions will cut into that time significantly. While executing full on Playstation gameplay, the battery went from full charge to 10% in 90 minutes.

Once the Xperia Z3v was drained flat, the device recharged to 100% at the following timed pace:

If you give the PS4-centered abilities a rest, the battery holds up well even amidst other multimedia functions, like movies and TV shows also available via Sony’s streaming connections.

The Xperia Z3v comes packed with a sizable collection of pre-loaded apps, from a virtual version of a Sony Walkman to common, cross-platform regulars like YouTube or Kindle. When add in the stores necessary to download more apps, eBooks, movies, etc., there’s plenty going on with the Z3v right out of the box.

That should appeal to most potential buyers. But, for those more dedicated to personalizing their devices, it can be a presumptions irritation. Some of the preloaded apps are removable, but the Sony-centered standbys are generally there for life. 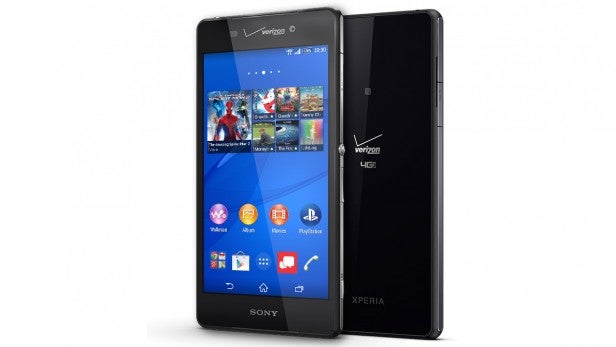 Should I buy the Sony Xperia Z3v?

Obviously, the question applies most directly to Verizon users — unless you get your grubby hands on an unlocked model somehow. That caveat aside, the aesthetic weaknesses of the phone are not powerful enough detriments to dent the phone’s overall appeal. Users aren’t buying an oil painting. They’re in the market for an Android smartphone, and the Z3v is a prime communication device.

When you add in the additional entertainment potential of PS4 partnering with a full HD screen, that puts the Z3v over the top, considering potential resistance from its comparatively steep purchase price.

Android favoring Verizon users looking for a full-function smartphone will be well-served and entertained by the Xperia Z3v despite its underwhelming outward appearance and the additional thump to the wallet.