The Xperia X3 Tablet Compact comes with Android 4.4.4 KitKat installed, which means it’s ever-so-slightly behind Google’s own Nexus range, which has just been updated to Android 5.0 Lollipop recently. However, Sony’s aiming to upgrade the entire Z3 family early next year, so you won’t be out of the loop for very long should you decide to invest in this device.

As usual, Android sits beneath Sony’s own custom user interface, which comes with a wide range of benefits and some not-so-welcome elements. Features such as tap-to-wake, screen recording and the ability to organise your app drawer based on certain criteria are baked into the OS here – these are features which aren’t currently available in ‘stock’ Android. However, while such embellishments are definitely a bonus, they come with some drawbacks – the chief of which is the unnecessary duplication of functionality and the sheer volume of bloatware apps which can’t be uninstalled. 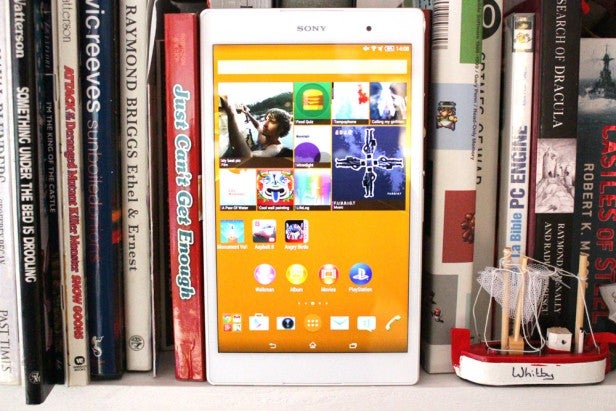 Back to the positive side for a moment, the Xperia Z3 Tablet Compact makes the most of its Sony heritage by including the option to be used as a screen for your PS4 games console. This allows for the kind of off-TV play that the Wii U has popularized, and means you can happily game away while someone else hogs the television set. The setup process is easy enough and games look amazing on the tablet’s rich and colourful screen, but there’s noticeable latency, and games rarely run as smoothly as they do on the actual console.

Sadly, Sony – like rivals Samsung and HTC – has seen fit to flood the tablet’s internal storage with apps and digital stores which essentially replicate what Google’s own options already cover. So in addition to Google Music and Google’s exhaustive selection of songs and albums available for purchase via the Google Play store, you have Sony’s own music repository and music player. It’s the same deal for apps and movies.

Choice is always welcome, of course, but doubling up in this fashion can lead to confusion on behalf of the user – especially as you’ll have to enter your credit card details twice to use both Sony and Google’s digital stores. 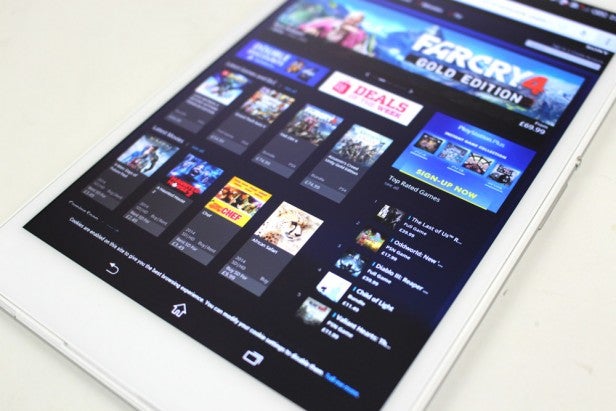 Internal storage of 16GB is included, of which 11.20GB is available to the end
user – the rest is occupied by other elements which can’t be removed,
such as the OS itself and those pesky pre-installed applications. You’ll
want to expand this total fairly quickly if you’re looking to download a
lot of games, music or films, and the Xperia Z3 Tablet Compact is
capable of accepting microSD cards of up to 128GB in size. 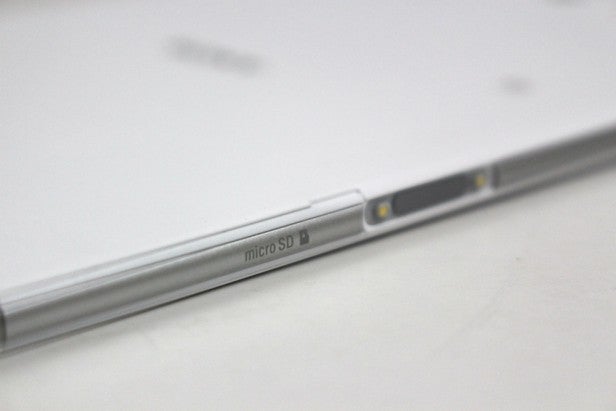 Nestled within the Xperia Z3 Tablet Compact’s svelte frame is a quad-core Qualcomm Snapdragon 801 chipset clocked at 2.5GHz. It’s supported by 3GB of RAM – the same amount seen in many leading smartphones these days – and consequently is more than able to deal with any task you can throw at it.

During our benchmark tests, we discovered that the Xperia Z3 Tablet Compact offered impressive performance when set against rival tablets. A Quadrant score of 19,819 places it at the upper end of the Android tablet market, while Antutu Benchmark awarded it a score of 42,642. 3DMark, a benchmark which tests the 3D graphics capability of a wide range of hardware, delivers a ranking of 18,224. That’s below the 30,522 score posted by the Nvidia Shield Tablet, but still a more than respectable rating.

The Xperia phone range is famed for its superb cameras, so it might be a little disappointing to discover that the Xperia Z3 Tablet Compact comes with just an 8.1-megapixel snapper and lacks any kind of flash.

The quality of the images taken on this slate aren’t dismal by any means, though, and it’s a perfectly acceptable substitute for those times when you don’t have a proper camera – or a superior-snapping mobile phone – to hand. A front-facing 2.2-megapixel camera is there for when you need to make video calls, and performs its job admirably.