The Xperia Z2 runs Android 4.4 with a new version of the custom Sony interface used in other Xperia phones. It doesn’t feel all that much different to standard Android, as its approach has a lighter touch than either HTC’s Sense or Samsung’s TouchWiz interface.

It does provide its own look, though, and it’s all sharp edges and simple lines. Of course, these only show through in things like the design of the virtual nav buttons, the included clock widgets and some of the app icons. 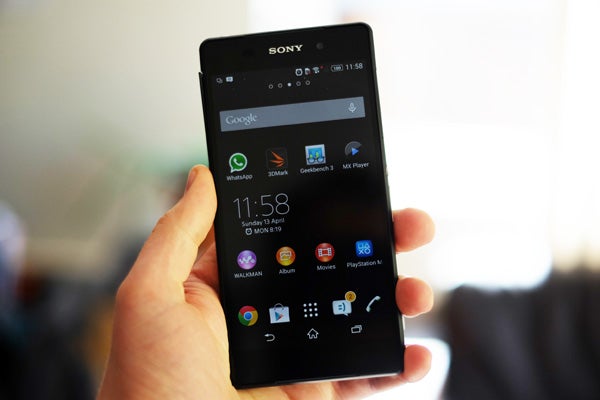 The Xperia Z2 doesn’t have a live-in home screen news feed like the BlinkFeed screen of the One M8 or the My Magazine feature of the Galaxy S5, but that’s because the interface is out to push Sony’s media services rather than anything else.

There are a bunch of them, including Video Unlimited, PlayStation Mobile, the Xperia Lounge, TrackID and Sony Select. The Z2’s interface doesn’t give you any way to hide app icons, and you can only uninstall a few of the bundled apps.

The phone does feel a little bloat-y to start with. And as the phone has just 16GB of storage this is an annoyance, but you can at least file away anything you don’t need into a “Sony junk” folder. 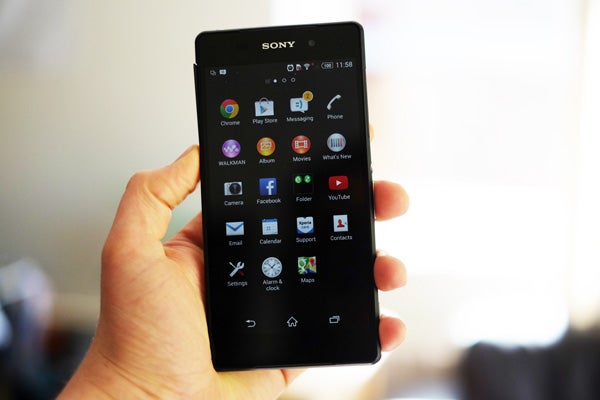 Some of the bits are basics, though, even if they double up on apps offered by Google. There’s a Sony Walkman App, a Sony image gallery and a Sony movie player. The latter is reasonably useful as these days the Google app seriously sidelines watching your own movies in favour of buying/streaming ones from Google.

General performance isn’t quite flawless – we’re a software update or two away from the Xperia Z2 running at full steam – but this does feel like one of the snappier custom interfaces. The way it moves is quicker than the Galaxy S5’s TouchWiz interface and it seems to prove less of a load on the phone’s Snapdragon 801 processor too.

The Xperia Z2 software’s simple style also extends to core things like the notifications bar and lock screen. Where other phones tend to pack these with more information than a washing machine service manual, the Z2’s are refreshingly simple.

The notifications bar itself features just notifications and an extremely plain weather update from Google Now, with phone settings demoted to a second tab. And the lock screen just shows you the time, date, and a camera shortcut unless you’re playing music. There’s no extraneous gumpfh, nothing that’s clearly there to act as a bullet point for a phone seller at Carphone Warehouse to brag on about.

It makes the phone very easy to use, but many of you may miss having,
for example, a screen brightness slider in the notifications drop-down. 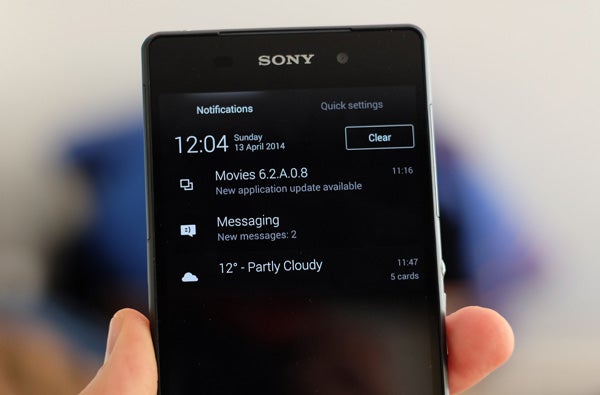 There is a bit of flesh on the bones of the software’s skeleton, though. For example, the start-up wizard lets you login to your Facebook and Twitter accounts to get social’d up without downloading the separate networks’ apps.

This is one of just a few top Android phones to offer just the one browser, rather than multiple web-browsing apps. You get Chrome, and the browsing experience is pretty great in most respects.

The large, sharp screen is prefect for reading web pages and the keyboard is certainly one of the most attractive and intuivitively laid-out Android keyboards in existence. However, if you read sites on the morning commute, this is when the Z2’s size and angular design show their grimmest colours. The phone feels a bit more awkward than the competition in this situation. 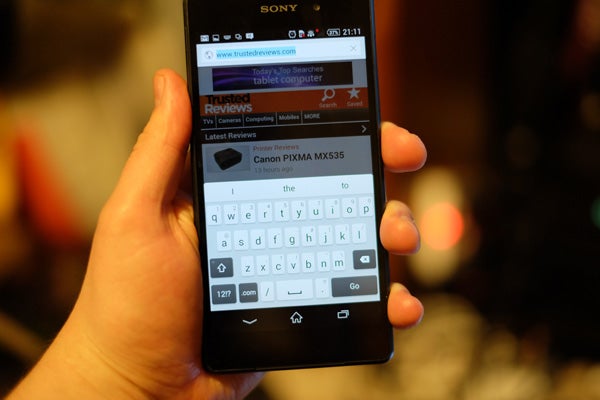 Finally, it’s worth noting that once you factor in Sony’s apps and a few of your owm, the 16GB of storage leaves you with about 8GB left to play with There’s currently no 32GB or 64GB version of the phone, so we recommend investing in a memory card if you want to use the phone for locally-stored music or video.

As already noted, we did experience the odd little bit of slow-down in the Xperia Z2, but not as much as we saw in the Galaxy S5. While there are spec differences between the two phones, this basic performance change is all down to software optimisation, not specs. 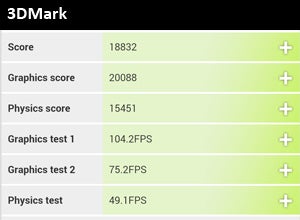 Like the other big-name 2014 Android lead phones, the Xperia Z2 uses the Snapdragon 801 processor. It has become a standard for this year. The particular version used here is the 2.3GHz variant, while the S5 is clocked at a slightly-faster 2.5GHz.

The Xperia Z2 is one of just a few phones to have 3GB of RAM. We’re yet to see any tangible day-to-day performance benefit from this, though – especially as Sony doesn’t push side-by-side app multitasking in the same manner as Samsung.

Think of it as techy futureproofing if you like, but don’t let it factor in your buying decision if you’re also looking at phones like the iPhone 5S and HTC One M8 too (the iPhone 5S has 1GB and is one of the most responsive phones around). 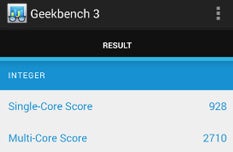 Gaming performance is roughly on-par with the other Snapdragon 801 phones we’ve reviewed. With launch software there are some tiny frame rate drops in a couple of high-end games like Real Racing 3, but we’re confident the Xperia Z2 can handle anything the Google Play store currently has to offer in terms of fancy 3D games.

The phone scores 2,715 in the Geekbench 3 benchmark, and 18,832 in the 3DMark Unlimited. That’s a little lower than its Snapdragon 801 rivals, but with so much recent talk about benchmark rigging, we’re happy to conclude it’s really on-par with the rest.

Sony Xperia Z2: Overheating – Is there an issue?

There is some concern surrounding the heat the Xperia Z2 runs at, with numerous reports that there is a real issue here. Like the previous Xperia Z phones, it does run a little hot. And during the early stages of our testing, it got hot enough that an error message popped up saying the phone was on the verge of shutting down.

However, in the several days following this incident, temperatures stayed within acceptable levels. This temperature graph shows that normal running stays below 40 degrees, and this included some game-playing: 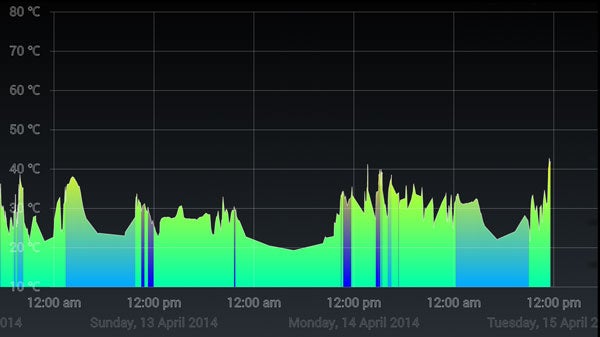 Unfortunately, the phone was not recording temperature data when the phone got super-hot

Real overheating seems to occur when the phone is doing fairly heavy processing while searching for a mobile/mobile internet signal. There are also reported problems when the phone records 4K video for quite a while, but we had no problems when capturing 4K. And we were unable to recreate the overheating message. It does happen, but it’s rare and only caused by an unfortunate convergence of events.

As the hot zone is up top, the extra warmth of the Z2 only becomes obtrusive when you’re holding the phone in landscape. But if a hot-running phone is something you don’t want to deal with, consider taking a look at the HTC One M8 or Galaxy S5 instead. 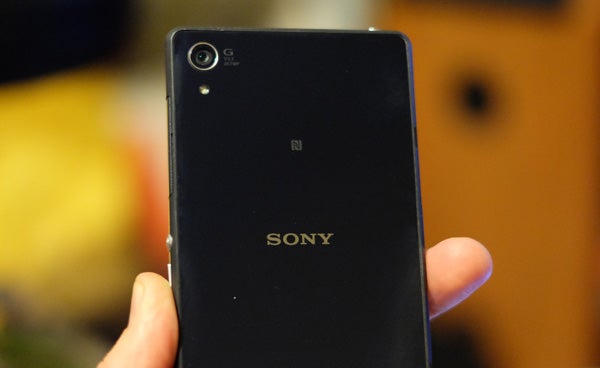 The area above the Sony logo gets hot

Back to gaming – thanks to its PlayStation links, the Xperia Z2 has a few more inbuilt gaming features than most phones. You can connect to a PS4 using the inbuilt PlayStation app, and PlayStation Mobile is a separate games store for certified devices. However, you can get the former for most Android phones and the latter is nothing to get excited about. It’s poorly stocked and as far as we can tell you’ll find all its notable games on Google Play anyway.

What is a little cooler is the Xperia Z2’s integrated support for DualShock 3 controller – the PS3 gamepad. It’s part of the settings menu, and lets you use the gamepad in loads of games. As Android veterans might guess, though, you can do this with other Android phones with the help of a third-party app and a bit of reading up.

You may be getting the idea by now – the Sony interface does have a few extras, but the real reason to like it is Sony leaves out a lot of the superfluous bits the LG and Samsung interfaces can feel weighed-down by.