The Sony Xperia Z2 has
one of the most feature-packed camera apps we’ve seen. There’s an awful
lot to digest, but it avoids becoming a terrible mess by offering a
Superior Auto mode that covers just about any possible shooting
situation for the point and shoot crowd. Unlike normal auto modes, it
can use HDR for backlit scenes, and the super low-light mode when it’s
needed.

The actual camera shooting screen is pretty simple too. 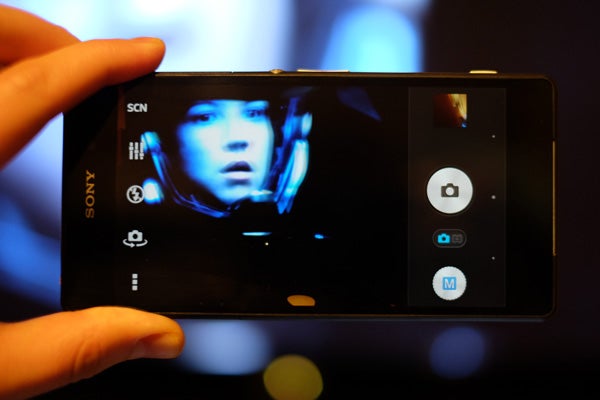 This the Manual mode. Auto is even simpler

The
default Auto mode is much more controlling than that of most phones.
It’s the Manual mode that provides the ‘normal’ mobile shooting
experience.

Let’s be clear – this is not a real manual mode. It
lets you choose the resolution of your photos (It’s all 8MP in Auto),
pick scene modes and choose whether or not to use HDR. It’s not for
photo pros, it just gives you a little say beyond when to press the
shutter button.

The rest of the camera modes are a little more
creative or frivolous (/fun). There’s the AR (augmented reality) mode
seen in the Xperia Z1, which plasters anything from dinosaurs to little
gnome fellas on your screen – kids will love it. There’s a fantastic
selection of filters too, including some pretty dynamic picks like the
Harris shutter, fisheye lens and kaleidoscope. Here are some examples of
the sort of creative things you can do with them: 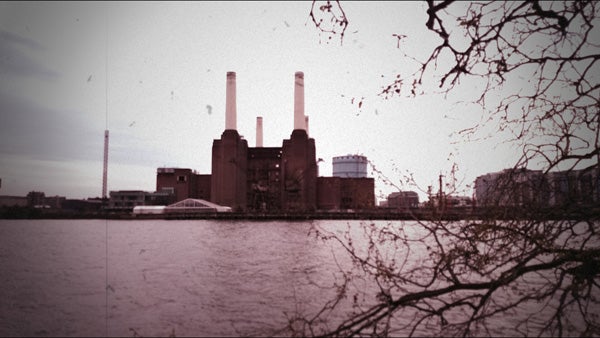 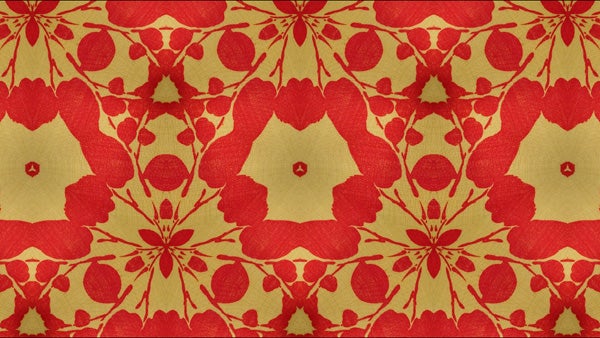 The Kaleidoscope function is good for making your own phone wallpapers 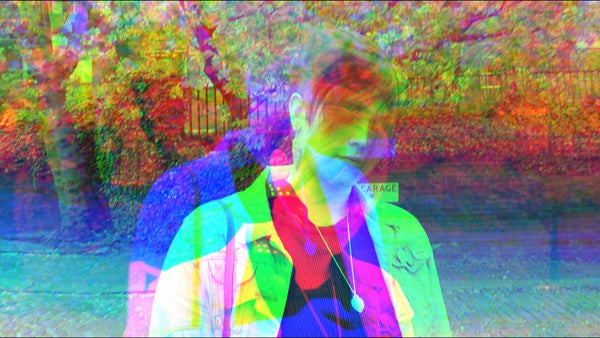 The Xperia Z2 also has a go at the sort of ‘fake bokeh’ mode that every new phone seems to have attempted this year. The HTC One M8 does it with special hardware, the Galaxy S5 and LG G Pro 2 with a normal camera and software.

As with
every other take on this kind of effect we’ve seen to date, it’s not all
that effective but is fun to experiment with, especially as there are
three different blur types – normal, vertical motion and horizontal
motion.

It is a little slow (not as slow as the Galaxy S5,
though) and defocusing effect often leaves bits out or cuts into the
subject. But here are the sorts of shots you can take with it: 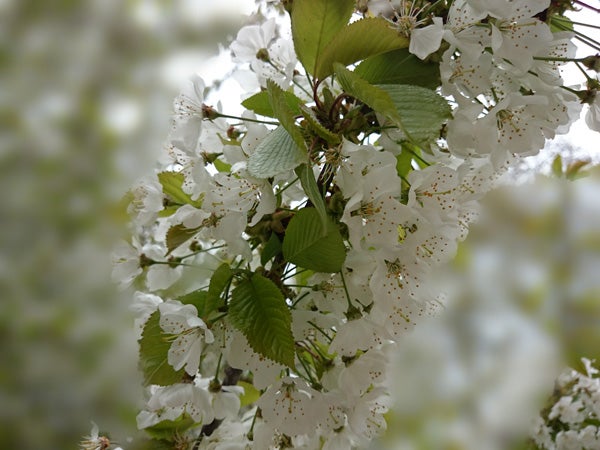 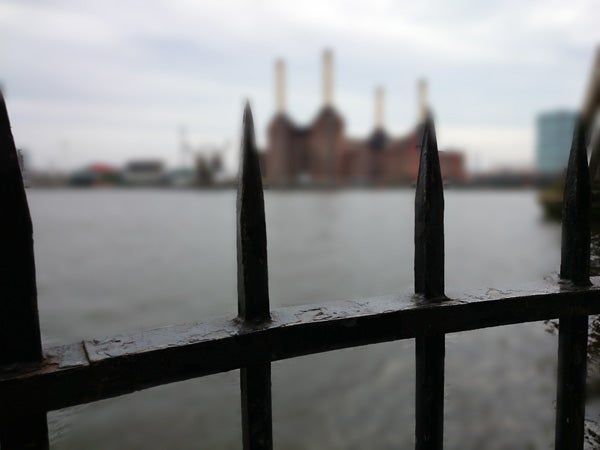 The railings have been blurred out into the sky here, spoiling the effect a bit. 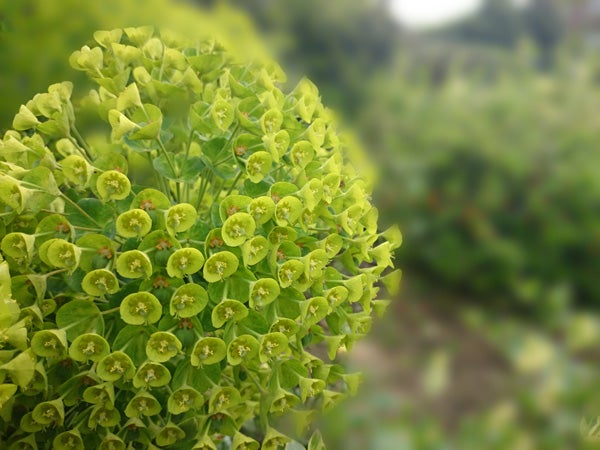 The
feature has worked pretty well here. There’s a weird non-smeared blip
in the bottom-right and the edge of the plant has been blurred, but from
a glance you could almost believe it was an optical effect. 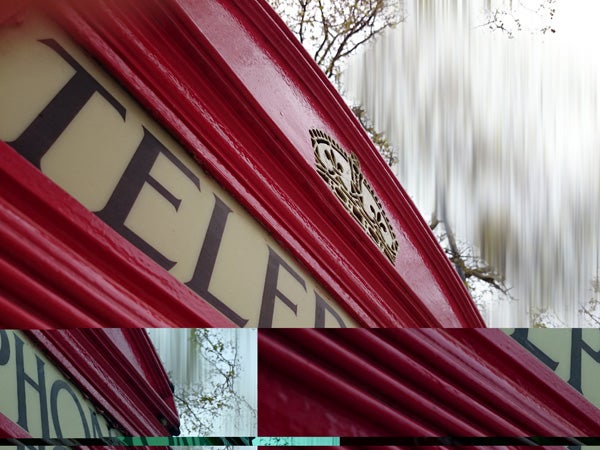 Sometimes
the blur mode goes very wrong indeed. We have no idea what happened
here. Not only did the blur work horribly, the mode has also corrupted
the image.

The
Sony Xperia Z2 has the highest-resolution camera among its big-name
peers – the Galaxy S5, the iPhone 5S and HTC One M8. It uses a
20.7-megapixel sensor. What’s initially hard to get your head around,
though, is that it uses this sensor primarily to take better 8-megapixel
photos. Not 20-megapixel ones. 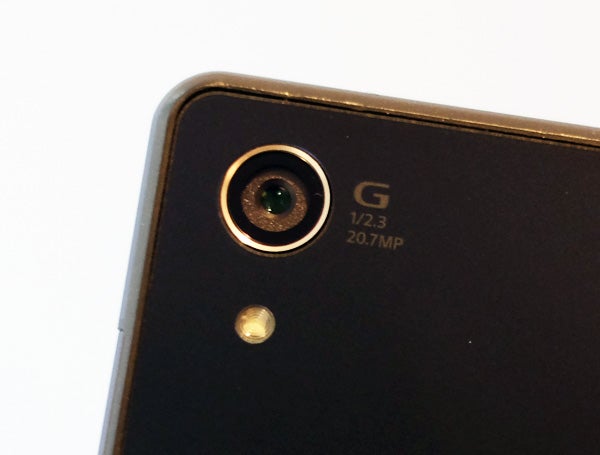 Our
assumption is that Sony has been producing small pixel-pitch mobile
sensors for so long that it’s much easier/cheaper to develop a
20.7-megapixel sensor than an 8-megapixel one of the same size. And, of
course, it sounds better on the spec list as-is.

This is a
1/2.3-inch sensor, a fair bit larger than the 1/3-inch sensor of the
iPhone 5S, the 1/2.5 S5 sensor and the 1/3-inch One M8 sensor. When you
shoot in the auto mode, the output from the 20-megapixel sensor is used
to create a higher-fidelity 8-megapixel image than most phones of that
resolution could muster.

While you can shoot 20.7-megapixel and
15.5-megapixel photos in the ‘manual’ mode, you’re heavily dissuaded
from doing so. Shots higher than eight megapixels can’t use any scene
modes or the HDR function. For this reason, we’re only going to use full
20MP resolution shots to look at the detail this phone can produce. The
rest of our images are 8MP. 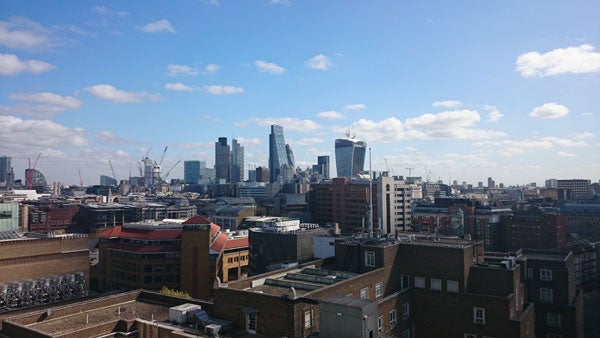 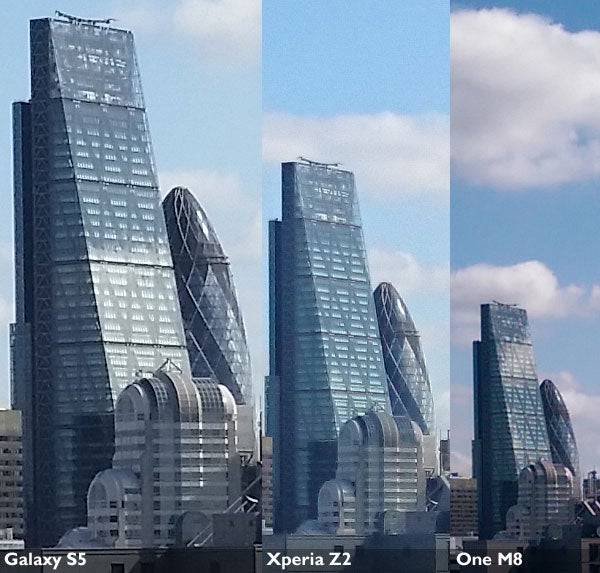 The
Galaxy S5 is clearly the detail winner here, but note how the Xperia
Z2’s downscaled 8MP image is able to render very fine details clearly –
such as the detailing on the top of the Gherkin. 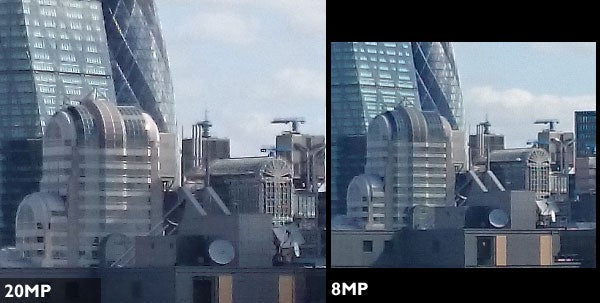 The Xperia Z2 creates very confident, detailed-looking 8-megapixel images, right down to pixel level when shooting in good lighting. This image of a crane shows you the sort of fine detail fidelity you can get when deliberately reducing resolution instead of trying to inflate it. Check out how clearly separated the two fine cables are. And there’s none of the purple chrome noise that plagues the HTC One M8’s images: 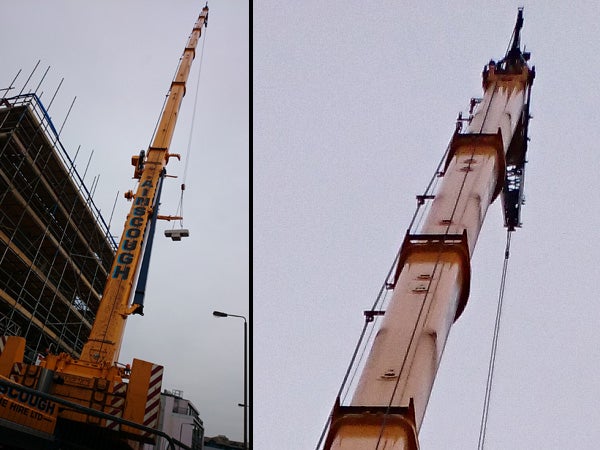 However, we did find that the playing with resolution does become a limiting factor when shooting macro-style photography. At pixel level you can see that, while sharp, the actual sensor can see finer details that are represented in the final 8MP image. It limits how much you can crop into macro images a bit. But it’s fundamentally a pixel peeper’s problem. 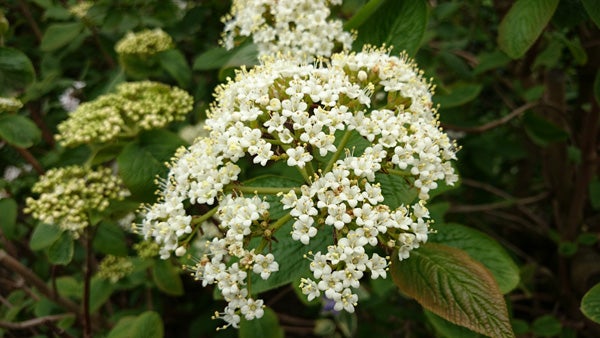 Here’s a 1:1 crop from the centre the above photo. There’s quite a lot of fine detail, but could there be even more? 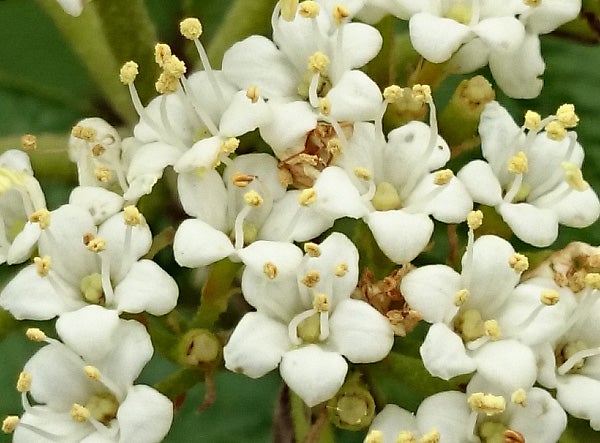 When dealing with poor lighting, the Xperia Z2 is pretty solid. By using multiple sensor pixels to create each pixel in an 8-megapixel image, the camera can continue with reasonably low levels of noise well past sunrise, as long as there is enough light for the autofocus system to actually lock onto.

Here’s where the scene modes of the manual setting can get a little confusing, though – there are four modes designed for low-light shooting. There’s night portrait, night scene, hand-held twilight and high sensitivity. The best results come from the hand-held twilight mode, and they’re great for a camera without optical stabilisation that doesn’t take ages over its low-light shots. 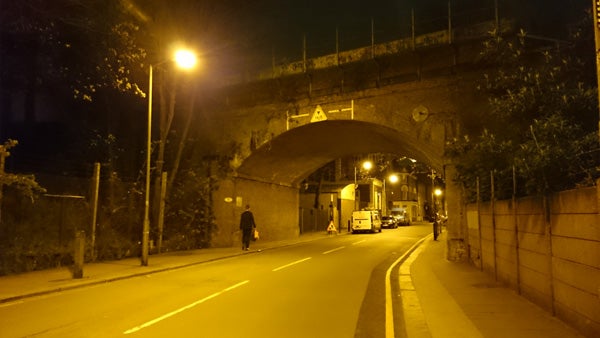 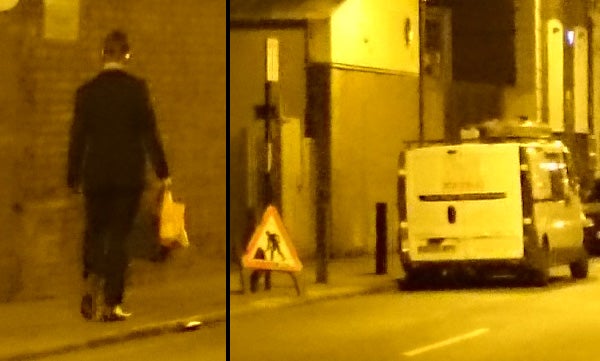 1:1 pixel crop (note how the noise reduction has not destoyed the finer detail on the sign) 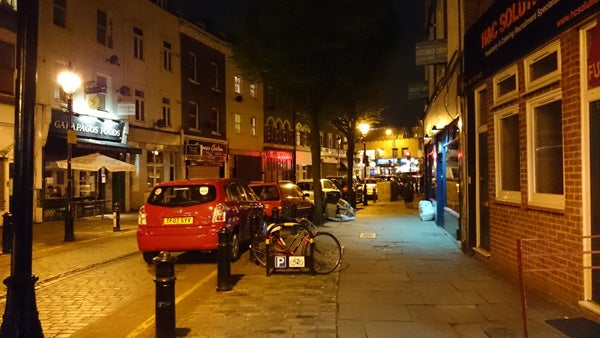 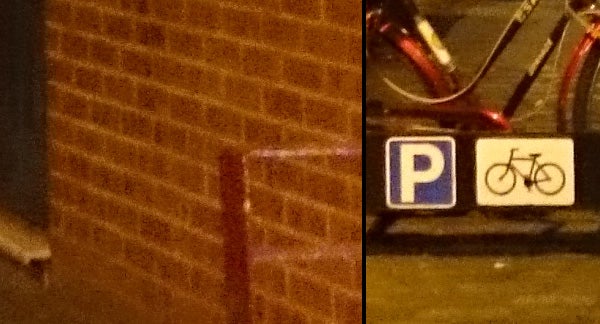 1:1 pixel crop (again, detail is pretty good, even right at the edge of the frame)

Like the Xperia Z1, the Xperia Z2 has ways to deal with very low light conditions without using a flash. But you might say the phone actually goes too far.

When using Auto mode, at a certain point of ambient light dimming the Xperia Z2 reverts to an extremely aggressive system. It artificially ramps up image brightness, and seemingly supercharges sensitivity (artificially or otherwise). It does this without masses of image noise too, by smoothing out anything it can. 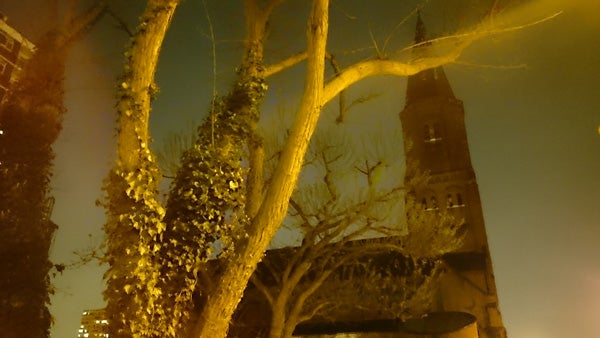 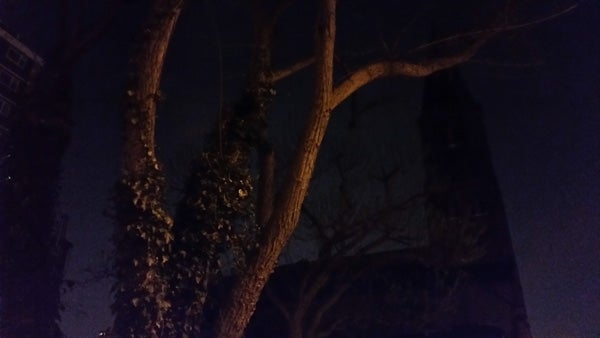 It may not look like it, but the Galaxy S5 is actually the better shot here. There is more detail in the tree and the colour representation is far more faithful.

While it makes dark scenes that would otherwise be little more dark graininess in other phones comprehensible, the shots tend to look quite unnatural. As well as having flat-out the wrong brightness level, white balance is often totally out of whack and planes of the image are flattened in order to wipe-out noise. It’s quite a feat of software jiggery-pokery.

It becomes more of a substantial criticism when we compare it to the Galaxy S5. Its picture stabilisation mode merges multiple exposures to offer reasonable-fidelity images in any lighting conditions. The Z2’s most extreme low-light mode is more like an auto-photoshpping of the scene that turns it into a candied confection.  The Galaxy S5 is slower – much slower – in these conditions but the detail and overall image quality you get with the S5 in very low lighting is simply better, and offers more scope for editing.

You wouldn’t want to save either for posterity, though, so many of you may prefer the more eye-catching Xperia Z2 shot.

Another low-light limitation is that there’s no real manual control to let you choose how the Z2 copes with low light. For example, with an HTC One M8 you can slow down the shutter speed and crank down the exposure compensation to take half-decent low light shots. Here you’re very much at the mercy of the Z2’s own software algorithms. But they do work reasonably well, for the most part.

There’s another area where the Xperia Z2 camera tends to trip up a bit, though. In shots with a fair bit of variance in light levels – a daylight indoors shot where there’s a window just out of shot, for example – photos can appear rather low-contrast, giving a washed-out appearance. The Galaxy S5 copes better under these conditions.

We’re also slightly disappointed by the HDR mode here. It’s fairly low-key, and so doesn’t leave you with artificial-looking photos, but it’s also not all that effective. Since seriously high-performance HDR modes started appearing in mobiles around a year ago we’ve started using them to ‘fix’ photo scenes that phones would never have been able to cope with a few years ago, but here you won’t get very far.

Particular scenes that show up this are things like those with strong light sources in the actual shot and those dramatic sunset skies, where the bright sky and rapidly-dimming foreground make it nigh-on impossible not to under or over exposure half of the image without HDR. The Xperia Z2 isn’t as great at capturing these moments as the very best.

Here’s a look at how the Xperia Z2 and Galaxy S5 HDR modes compare: 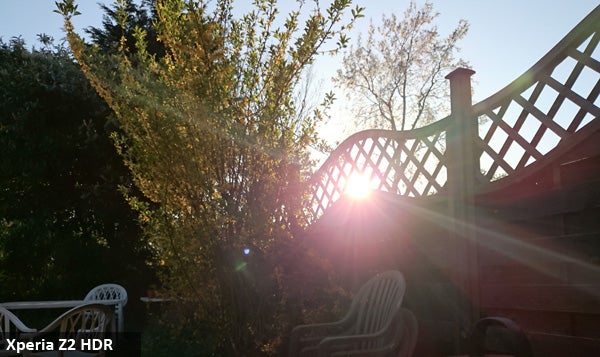 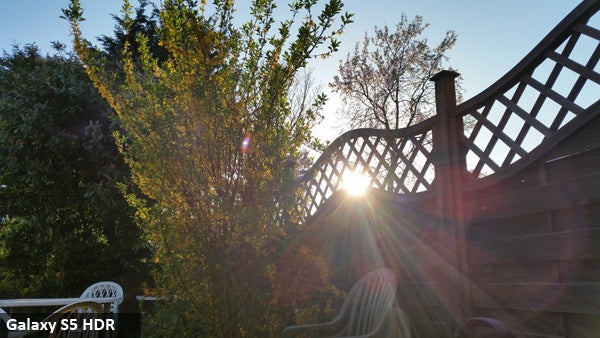 However, as a whole we’re most happy with the Xperia Z2 camera. Forget that it’s capable of shooting 20-megapixel photos and snap away. We do hope that Sony ups its HDR game soon, though. 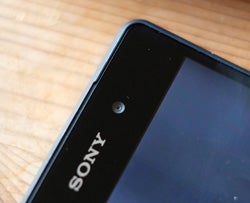 We’ve sidelined the flash so far because the XPeria Z2 does its level best to make sure hardly ever need it. And as such, it no surprise it’s pretty unremarkable. It’s a single-LED flash with none of the duo-tone tech you get with an iPhone 5S or HTC One M8.

The front camera is conventional too. It uses a 2.2-megapixel sensor, with a wide-angle lens.

Like some other new high-resolution sensor cameras, the Xperia Z2 can capture 4K video with its rear camera.