The Xperia XZ2’s 3180mAh battery isn’t the largest you’ll find on a phone of this size, but in general I didn’t have any issues with its stamina.

With regular use I generally managed to get a whole day off a single charge. Regular use entailed listening to music on my morning and evening commute, taking and making a few calls, regularly checking email and social media feeds, playing some PUBG over lunch and watching a couple of episodes of Rick and Morty before bed.

During our video playback test, which involves streaming video until the phone dies, the XZ2 discharged an average of 8-10% per hour, which is pretty standard for a phone this size. Gaming puts a bigger drain on the battery. Playing 3D games, the XZ2 lost between 15-20% of its charge per hour.

Why buy the Xperia XZ2?

If you’re a fan of Sony phones then you won’t be disappointed with the Xperia XZ2. Featuring a reworked modern design, souped-up internal specs and all the trimmings you’d expect of a 2018 flagship, the XZ2 is a perfectly fine handset that will meet most people’s needs.

However, it doesn’t do enough to differentiate itself from the competition. Nearly all the significant changes are moves by Sony to catch up. This, coupled with the complete lack of a killer special feature – such as the Huawei P20 Pro’s multiple-lens camera, or the Galaxy S9’s dual-aperture setup – stop the XZ2 from being a true return to form for Sony’s Xperia line. 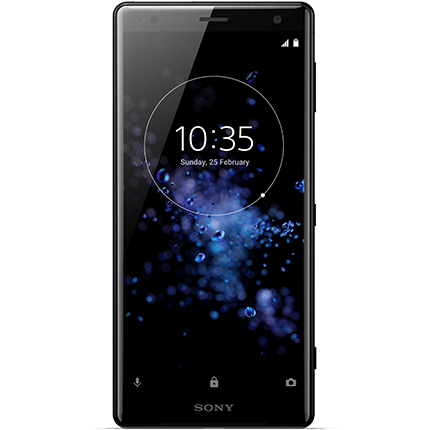 This deal gets you a super low upfront cost on the new Sony Xperia XZ2. Better yet, if you order now you get a free pair of Sony WF-1000X truly wireless headphones that we rated 10/10 in our review.