Performance varies wildly between mid-range phones. Many use older chips, like the Moto G4 for example. Others, like this Xperia XA, go for less well-known CPUs.

Instead of using silicon made by Qualcomm, a mainstay in a vast majority of Android phones, Sony uses a Mediatek CPU. To be more precise it’s the Helios P10 chipset that budget-focused brands like Elephone have been using. It’s octa-core, LTE-equipped and has a clock speed of 2.0GHz. Alongside it sits 2GB of RAM – respectable enough for a phone of this price – and a Mali T860 GPU.

The specs aren’t anything to write home about, but the phone’s general performance isn’t terrible. With day-to-day use the XA’s performance is perfectly fine. Basic apps (Hangouts, Chrome, Gmail, Twitter, Snapchat) all work without a hitch, though more intensive ones (VSCO, Afterlight, etc) can feel sluggish.

It’s a similar situation with games. You should be OK unless you want to max out Asphalt 8 and not see any dropped frames. Loading times were also much longer on the Xperia XA compared to the Moto G4, but you’ll probably only notice this if you have both phones next to each other. 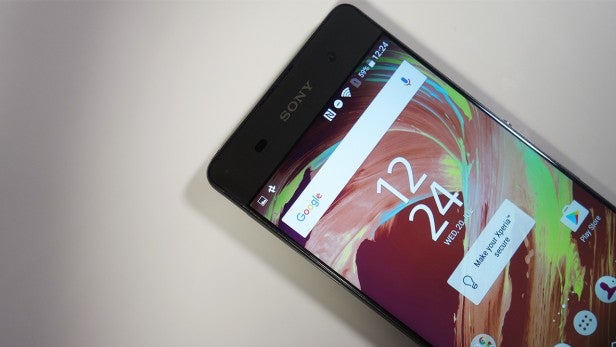 In TrustedReviews‘ usual suite of benchmarking tests, the Sony Xperia XA scored 47,959 in the AnTuTu test. This is a respectable mid-range score, putting it the same bracket as the Fairphone 2 and slightly above the Nexus 5X. I’d normally use Geekbench 3 too, but that failed every time, citing lack of an internet connection.

16GB is the only storage option available, and with a couple of apps installed I was quickly down to about 6GB of space. Thankfully, there’s a microSD card slot, and I’d certainly advise picking up a card (this SanDisk Ultra 64GB one is great, and very affordable) if you want to save music and videos offline.

The downward-facing speaker is rubbish, a disappointment from a brand so music-focused as Sony, and the microphones are a little on the quiet side. Expect to speak up a bit when you’re on the phone in blustery conditions.

While I have multiple dislikes about this phone, the software certainly isn’t one of them. Just like on the Xperia X, Sony has shown restraint with the Android OS and killed many of the superfluous features of its previous skins.

It’s clean and good-looking, with full-width notifications that really show off that edge-to-edge display. I also really like Sony’s new lock screen, which can be colour customised with different pastel-shaded themes. 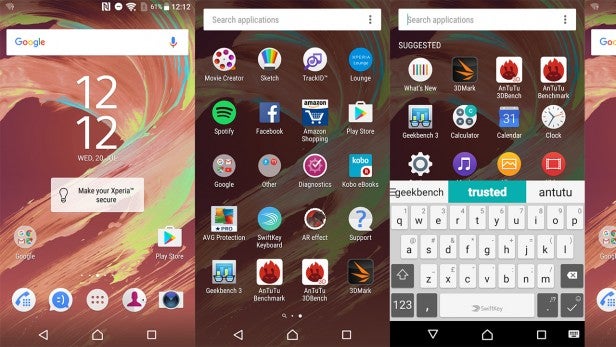 If you’ve ever used a Nexus phone, or one from Motorola, you’ll feel mostly at home here. There are a few differences – icons and a slightly different app launcher – but it’s simple and nowhere near as confusing as, say, Huawei’s launcher.

Sony does include a lot of its own apps, notably Music, Album, Video and some more annoying ones like AR effect, AVG Protection and What’s New. It’s nice to see the majority of these can be deleted, so it seems harsh to criticise this.