The Sony Xperia Tipo is Sony’s latest Android phone that has a small price to match its dinky dimensions. However, unlike a lot of other budget handsets we’ve seen lately, it doesn’t rely on the older 2.3 version of Android, but instead comes loaded with the relatively recent Ice Cream Sandwich version of Google’s mobile OS.

The Sony Xperia Tipo really is tiny, as it stands a mere 103mm tall and is 57mm wide. It’s relatively thick at 13mm, but because it weighs just under 100g, you hardly notice it when it’s tucked away in your pocket.

The design is pretty non-descript, but not exactly unpleasant. It’s decked out almost completely in black with just the silver effect used on the logos and touch buttons to break up the dark, moody exterior. The front has a slick glossy finish and there’s a sloping cutaway just under the screen that looks quite stylish.

On the back the curved battery cover, which has a grippy rubberised finish, helps it to fit snugly in the hand and the phone feels solidly built, even if the chassis is quite plasticy. 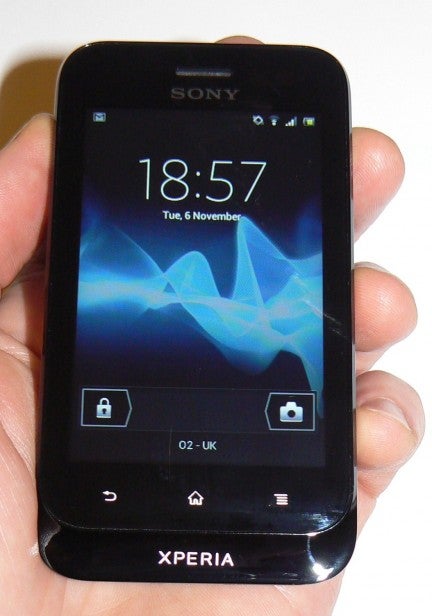 Along with the three standard Android touch buttons beneath the screen there are also hard buttons for the volume and power/lock controls. The latter is a tad too small and too recessed for our liking and as a result sometimes makes it fiddlier than it should be to take the phone out of standby.

Sony has thankfully placed the Tipo’s standard headphone jack at the top of the handset, but unfortunately the microSD card slot has been sited underneath the battery, making it a bit of a pain to get at.

Probably the most irritating aspect of the Sony Xperia Tipo is its screen. It measures just 3.2-inches across the diagonal and has a low resolution of 320×480 pixels. It feels very cramped to use, colours tend to look a bit muddy and there’s a good deal of motion blur when you’re scrolling through menus or up and down on webpages. 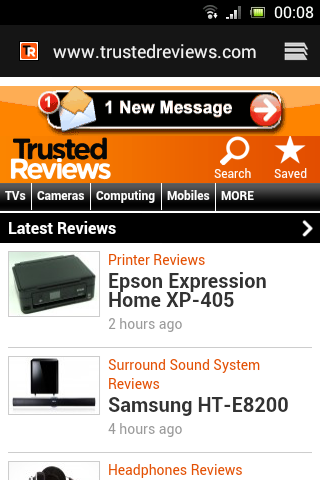 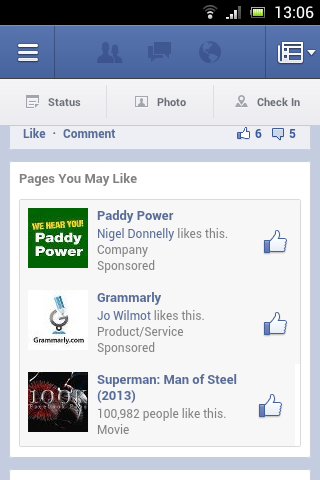 The small display also makes the onscreen keyboard a bit tricky to use, especially in portrait mode. This is simply because the keys are very closely packed together with the result that it’s easy to hit adjacent letters to the one you were aiming for. Using the predictive text entry engine in Android helps alleviate some of this as the phone will automatically correct mistakes, but typing messages or emails is still a lot slower on this phone than on Android mobiles with larger displays. 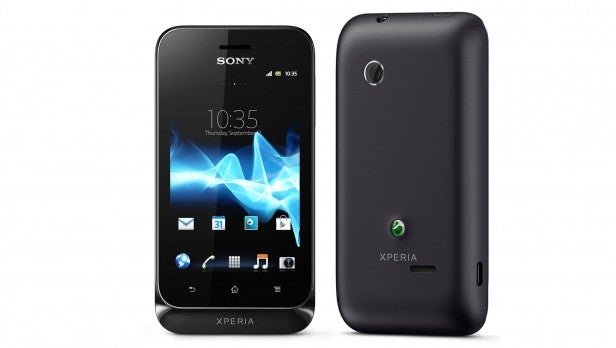 The handset only has as single camera on the rear, so you can’t use it for video calling in apps like Skype. The camera is a fairly basic 3.2-megapixel snapper with a fixed focus lens and a lack of integrated flash too. Picture quality is relatively poor mainly because it struggles to capture finer detail. Leaves on trees tend to look painted on, for example, as all the detail on the leaves gets smudged. It also tends to overexpose brighter areas of the image. On the plus side, colours are generally pretty accurate. On the whole, though, while the camera is fine for taking quick snaps to upload to Facebook, you won’t want to rely on it for much more than that.

The Sony Xperia Tipo specification is quite modest. It uses a single core 800 MHz Qualcomm Snapdragon processor which is teamed up with 512MB of Ram. It’s certainly not the fastest phone we’ve used, but nor is it dreadfully slow. However, its benchmarks results didn’t exactly knock our socks off. It took 3710.1ms to complete the Sunspider test, while in Browsermark it clawed its way to a score of 50881, and Linpack reported that it reached 30.507Mflops. It’s gaming performance actually isn’t that bad by budget standards, something which was reflected in the fact that it managed to deliver 25fps in the Egyptian Classic test in GL Benchmark. 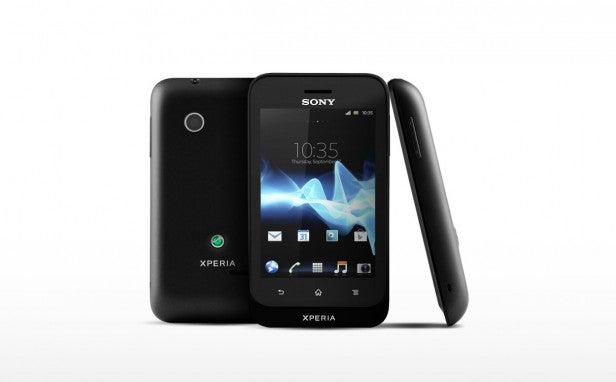 When it comes to storage the phone has just 2.9GB or space built in. However, only around 2.2GB of this is available for storing your own apps and files. That’s not an awful lot, as you’re likely to burn through it quite quickly once you start taking lots of photos and load up your own music tracks and video files. However, the handset does have a microSD card slot which can take cards of up to 32GB in size.

The Sony Xperia Tipo runs on the Ice Cream Sandwich version of Android, which isn’t the latest version as it’s now been superseded by Jelly Bean. Nevertheless, Ice Cream Sandwich is much more recent than the Gingerbread version that many other handsets around the £100 mark tend to use. 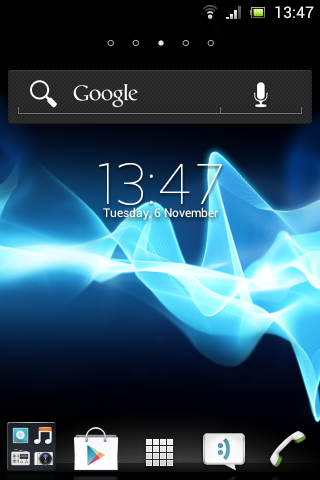 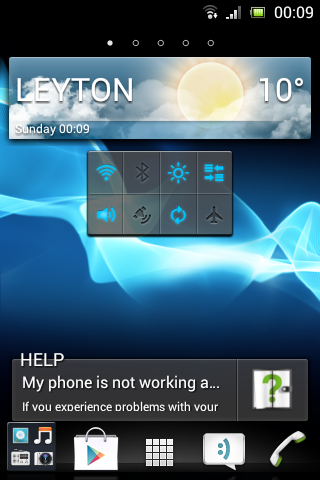 Sony has added its own launcher over the top of Android, but it still retains most of the core Ice Cream Sandwich features. For example, when you press and hold the home button a series of thumbnails pop up showing recently used applications and tapping on one of these instantly takes you back to the app. You can also swipe notifications sideway to get rid of them and also set data usage warnings so the phone monitors how much mobile data you’re using and notifies you when you’re getting close to the limit of your allowance.

Sony’s own skin isn’t massively different from the standard Android layout, although the graphics have a distinct Sony flavour. There are some neat effects too. For example, when you put the phone into lock mode the screen folds in on itself and then into a thin line of bright white light like an old analogue TV turning off. The app drawer is also organised as a sideways scrolling list and a button on the bottom lets you reorganise the order of apps alphabetically, by most used or recently installed. Alternatively you can just arrange them in your own particular order. 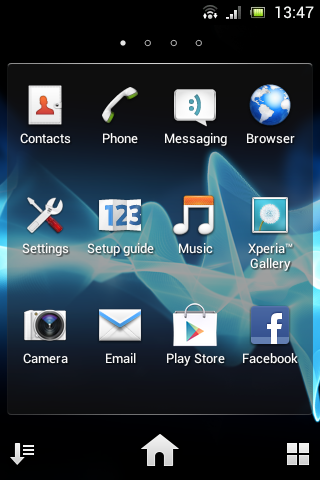 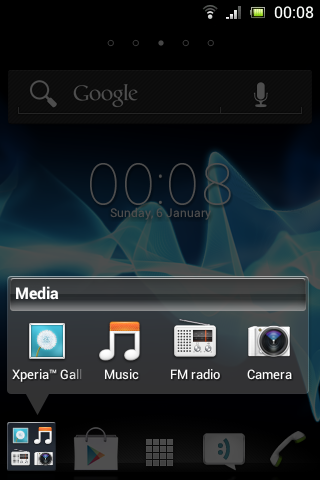 Sony has added a few useful widgets such as the Top Contacts one which automatically populates itself with the four people that you most often communicate with. You get apps for Sony’s own Music Unlimited music store as well the PlayNow store — which complements Google’s own Play Store — and offers games, apps and wallpapers to buy and download. There’s also a neat radio app for controlling the onboard FM tuner. It includes a TrackID button so if you hear a song on the radio and want to know what its called you can just hit this button and the phone use an online database to work out what track it is. 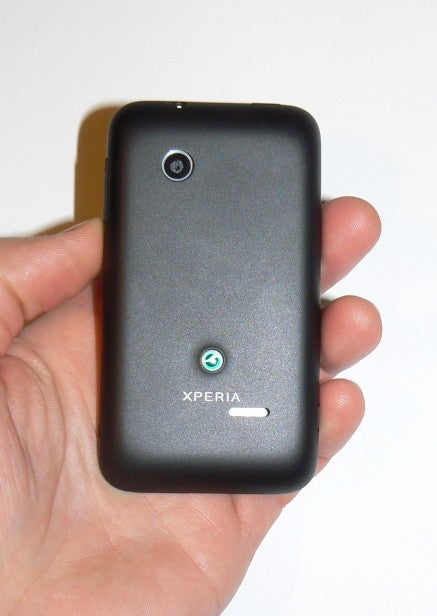 Call quality was a bit mixed. The earpiece delivers good quality audio, but the mic is a bit overly directional so if you hold the phone in slightly the wrong place callers may struggle to make out what you’re saying. Battery life was very good though, no doubt helped by the small screen and modest processor. We found we could easily get more than a full day out of it before it needed a recharge.

The fact that the Sony Xperia Tipo is so small and moderately priced will attract many. It’s also a bonus that it runs the relatively recent Ice Cream Sandwich version of Android. However, the small and low resolution screen makes it fiddly to use for everything bar the basics and the fact remains that the Huawei Ascend G300 offers a much better all round package for a similar price. 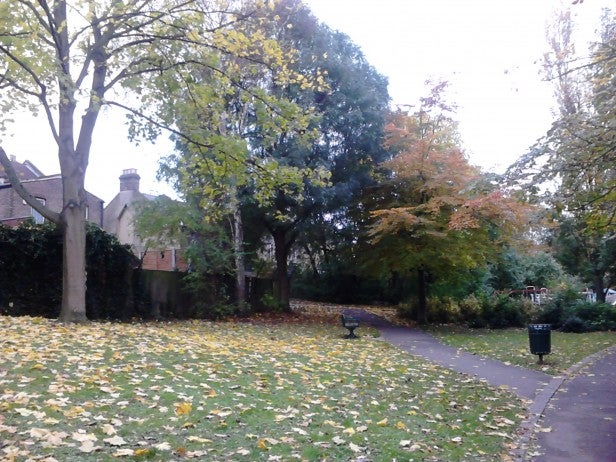 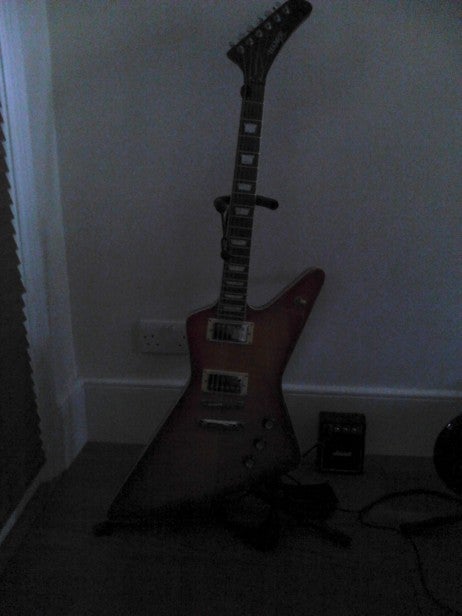 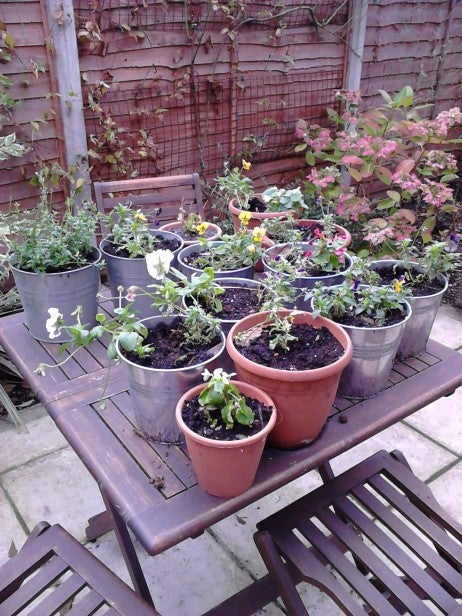 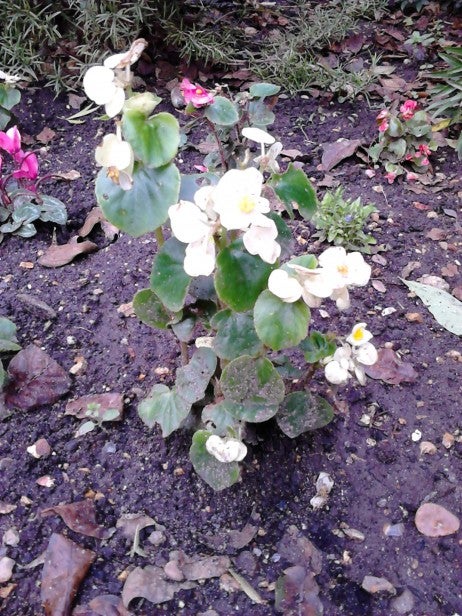 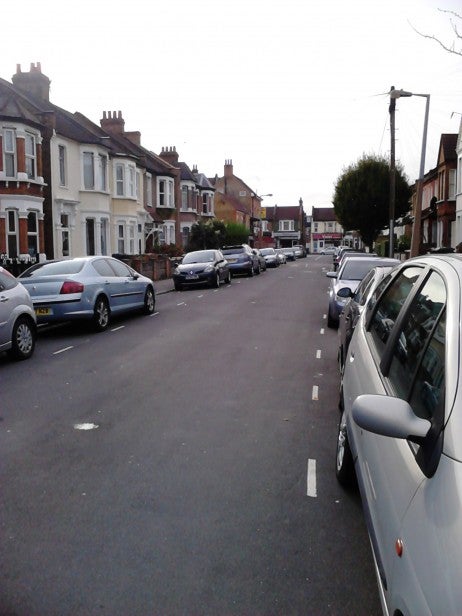