As with its phones and TVs, Sony has lagged behind its arch-rival Samsung in the tablet market in recent years. The Sony Xperia Tablet S is out to change all that, but does it make the necessary moves? With a quad-core processor, slim profile and up-to-date software, it certainly sounds the ticket. However, Sony’s typically ‘premium’ pricing structure means it’s not much of a bargain – especially when compared to the likes of the Google Nexus 10.

Released at the back end of 2011 the original Sony Tablet S turned heads because of its folio-like design, which essentially aped a book with a folded-over cover. It gave the tablet a chunky body but interesting, and pretty good, ergonomics (especially when it was held in portrait mode). The Xperia Tablet S continues with this design cue, although it’s clearly been put on a diet in order to slim down the tablet’s overall profile and shed the chunk factor of its predecessor. 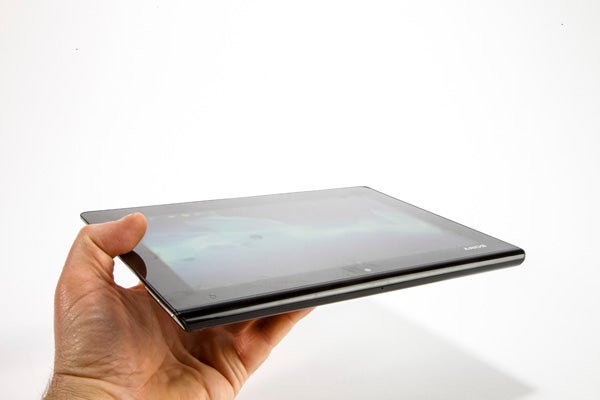 As with the original Tablet S, we can imagine that many people’s first reaction will be to ask why Sony has stuck with the “flipped over book” design. However, in-use this unusual shape does actually make the Xperia Tablet S much more comfy to hold single-handed – especially in portrait orientation. The extra thickness of the fold is a bonus in this one-handed scenario, and the plastic grip is textured with raised dots to increase grip. In other words, what might initially seem like Sony showing off is revealed to be a surprisingly practical design choice. 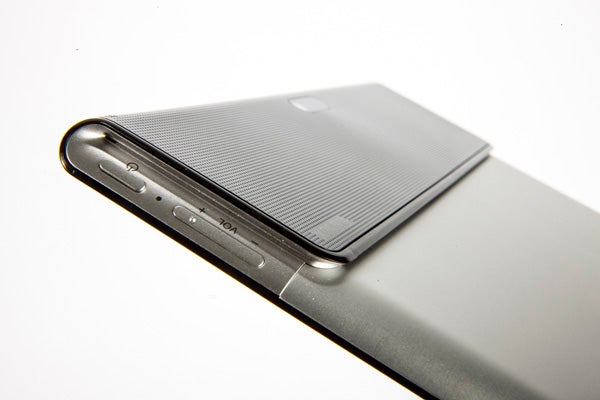 The Sony Xperia Tablet S is doubly handy as a single-hander tablet because it’s a little smaller and lighter than much of the competition too. Where many “full-size” tablets have 10.1-inch screens, the Tablet S has a 9.4-inch screen. A chunky inch-wide bezel surrounds the whole screen so it’s hardly tiddly, however it is smaller than most 10-inch tablets. And at 570g it’s also lighter. 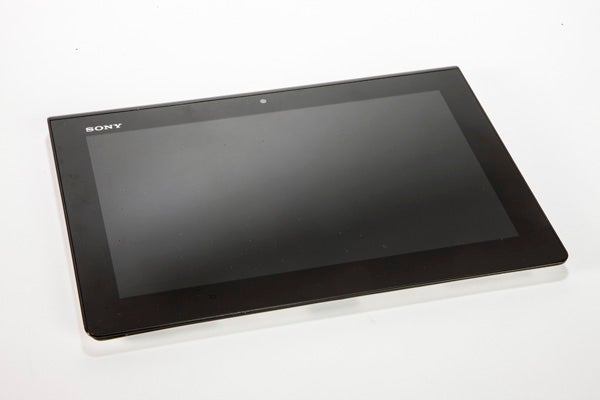 However, Sony has already one-upped this model with the Sony Xperia Tablet Z, which has a larger screen and lighter 495g body. This means that the Xperia Tablet S is no longer Sony’s top-end model. And at around £350, it’s hardly selling for pocket change either. Until it gets a price drop, it’s stuck in an awkward middle-ground between the much cheaper 7/8-inch tablets like the Google Nexus 7 and iPad mini and the more impressive – and not that much more expensive – Sony Xperia Tablet Z.

Aside from its lax efforts to reduce bezel size, the design of the Xperia Tablet S feels fairly up-to-date. Build quality isn’t bad either; apart from the plastic of the flip-over folio part, the Sony Xperia Tablet S’s rear is made of smooth, curved aluminium, bearing the same anodised finish as the iPad with Retina display. 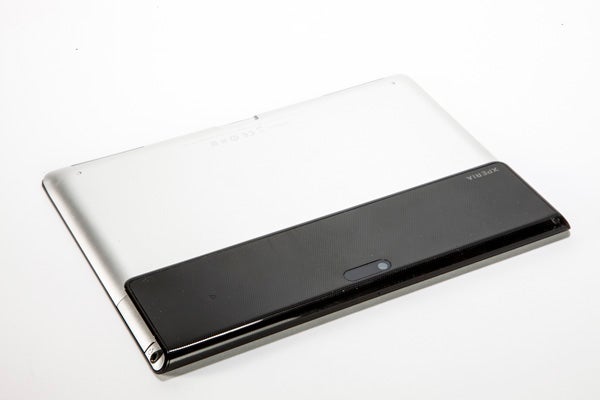 The Sony Xperia Tablet S makes good use of the extra girth of the plastic part, cramming-in a full-size SD memory card slot. Micro SD slots are a sought-after commodity in high-end Android tablets and phones, but full-size slots are rarer than budget beef burgers actually made of beef. This should prove an especially big draw to photographers – digital cameras are one of the few electronic device types that continue to use a full-size memory card. 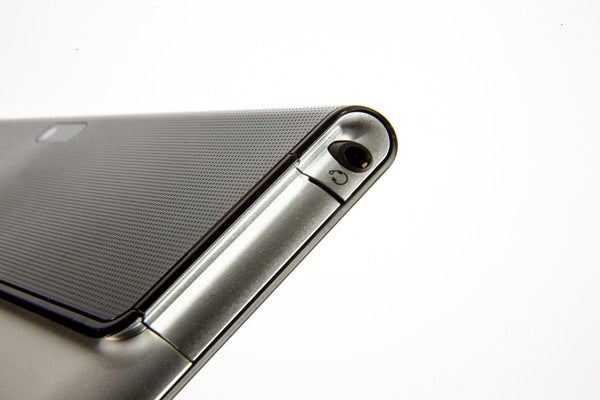 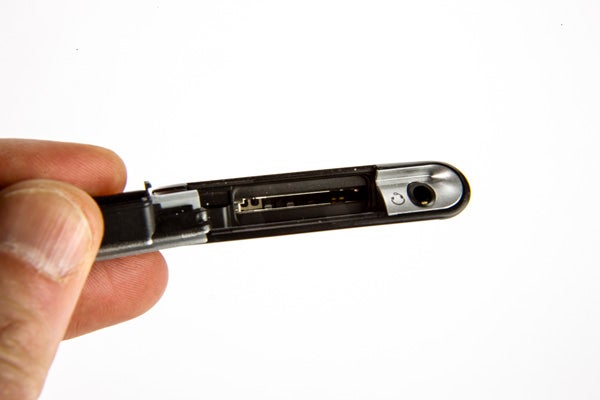 You’ll find the SD card slot on the Sony Xperia Tablet S’s left edge, under a plastic flap next to the 3.5mm headphone jack. The plastic alcoves that sit under the grip are where you’ll find all the tablet’s buttons and sockets, bar the proprietary docking port on the bottom. On the right edge there’s the volume rocker and power button – the only buttons on this tablet.

We reviewed the non-3G edition of the tablet, and while there is a 3G edition we doubt whether we’ll see this released widely in the UK.

On either side of the bottom rear edge you’ll find small inset speakers, giving some degree of stereo separation while you’re watching a movie in landscape orientation.

Although it has a thoroughly renovated design, the Sony Xperia Tablet S screen is not exactly cutting-edge. In fact, it feels like it belongs in a tablet from 2011 if we’re honest.

With 1,280 x 800 pixel resolution and dull-looking colours, it’s far removed from what the best tablets out there offer. Although 9.4-inches across, it only offers the same number of pixels as the Google Nexus 7, which has a 7-inch screen and costs half the price. 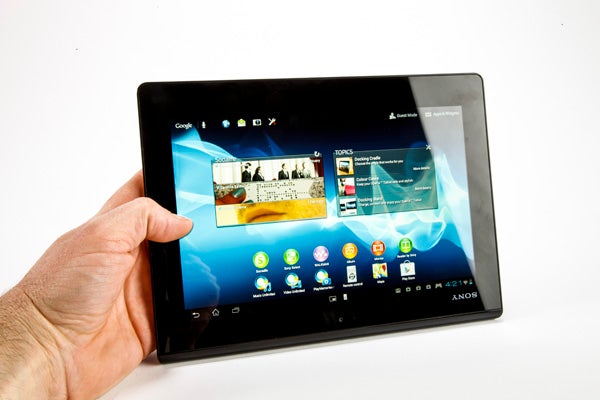 Some criticism of tablet screens boils down to whining about technology that doesn’t really affect real-world performance, however in the case of the Sony Xperia Tablet S, the problems are real. For a £300-plus tablet, it’s disappointingly pixelated and looks glum. Put it next to a Retina iPad and the Sony Xperia Tablet S just looks poor.

On a more basic level, the screen quality remains acceptable, though. The Sony Xperia Tablet S uses an IPS panel too, which provides good viewing angles. 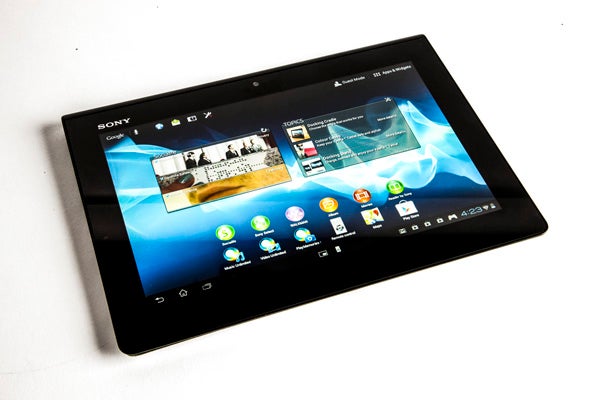 The most important omissions in Android 4.0 Ice Cream Sandwich are the Project Butter speed optimisations that were introduced with version 4.1 Jelly Bean. These tweaks have enabled much cleverer use of an Android device’s CPU, to grease the cogs of the Android system. Without them, the Sony Xperia Tablet S can feel a little bit sluggish, despite having a quad-core Tegra 3 processor.

The Sony Xperia Tablet S uses the 1.3GHz T30L variant of the Tegra 3 chipset, the same chip that’s also used in some lower-end devices including the Google Nexus 7. Given its price, it’s a little disappointing not to see the T30 or T33 variants here, which offer a superior GPU and higher clock speeds. With Tegra 4 already unveiled, and Qualcomm Krait chipsets outperforming Tegra 3, the chipset used here is already starting to smell a little musty. 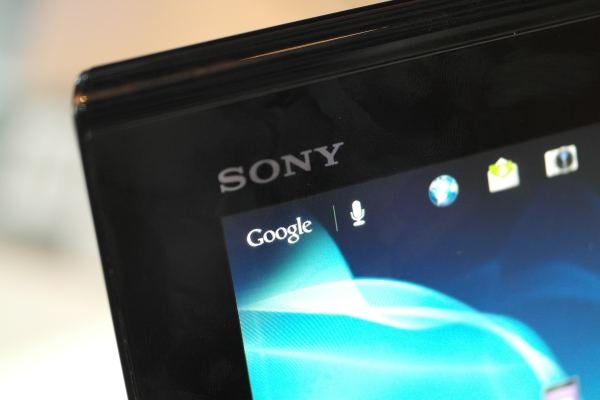 However, in terms of real-world performance what the Sony Xperia Tablet S really needs is an update to Android 4.1 Jelly Bean. That said, performance is perfectly fine – just so long as you can stomach the odd juddery transition or two.

Sony has not messed with the basic look and feel of Android too much in its custom UI. Rather, it has piled a bunch of features on top.

You can see a bunch of them from a quick glance at the Sony Xperia Tablet S’s home screen. Notice the extra shortcut icons at the top of the screen, talking you to the core tablet features of the browser, email app, camera and Settings menu. There’s a also the clever Guest mode, accessed using the shortcut near the apps drawer link at the top-right of the screen. 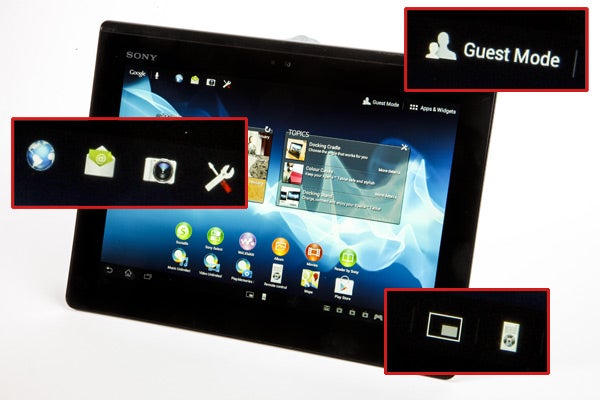 Guest Mode lets you set up additional home screen layouts for, most likely, other members of the family. You can limit the applications these custom “logins” have access to as well, making it the perfect way to restrict what your kids can get their hands on.

What true tablet fans will be more interested in, though, are the features accessed through the navigation bar. In the centre are two icons that point you towards Sony-specific features. 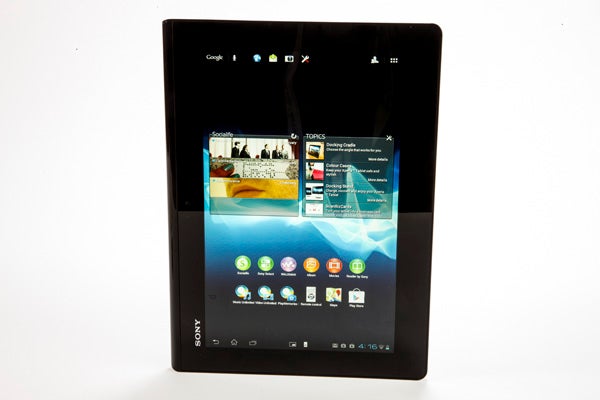 The Sony Xperia Tablet S offers a special widget loader that lets you run widgets as movable overlays, rather than things stapled to your home screen. This, for example, lets you run a calculator app while playing a game – the end result is much more involved multi-tasking than you get with standard Android.

The other nav bar button is the remote control app, which lets the Sony Xperia Tablet S function as a universal remote control. This is much more than just a piece of software too, as the tablet features a built-in IR blaster – something that most other tablets on the market don’t have.

Sony’s interface with which you programme the various virtual remote functions isn’t quite as high-fidelity as that of the Logitech Harmony remote line, but it does support a wide array of devices, including thousands of devices that are not made by Sony. 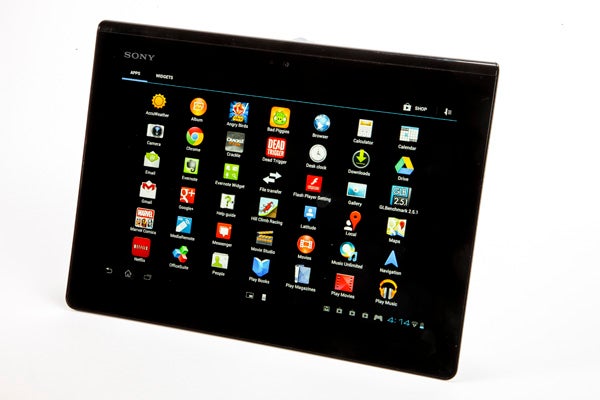 Aside from simply replacing your remotes with the Sony Xperia Tablet S, you can also programme in macro functions, which string together several commands into a single button click.

Other optimisations of Sony’s are largely about hooking you into Sony services: Sony Video Unlimited is a movie store that lets you rent and buy digital movies; Music Unlimited is a Spotify-like streaming service; and Reader by Sony is an ebook reader that also handily nudges you towards buying books from the Sony Reader store.

Sony does offer a few appy extras that aren’t just about trying to sell you things, though. Socialife is a Sony-made social network aggregator that bungs you Facebook and Twitter updates into a single, tablet-friendly feed. It also has a tab for RSS feeds, making it a sort of one-stop-shop for your daily consumption of digital detritus. It’s functional but doesn’t offer much you couldn’t get from a third-party app.